Peranakan cuisine, born of Straits Chinese and Malay roots, was once in danger of commercially fading away due to its elaborate preparations and perceived old-fashioned ways.

Peranakan people are descendants of early Chinese immigrants who intermarried with local Malays and Indonesians around the 17th century. Their distinctive customs and cuisine can be found in different permutations throughout Phuket, Penang, Malacca, Singapore and Indonesia, with a renaissance in recent years thanks to modern interest in the culture as well as a Singaporean TV series called The Little Nyonya. The phenomenal success of the show led to renewed interest in the cuisine, which not only spawned a China remake in 2020, but also helped renew interest in Peranakan restaurants that were dwindling at the time.

Each Peranakan eatery has an identity that’s as unique as a fingerprint, thanks to well-kept family recipes and increasingly modern presentations of the culture. Whether you’re a traditionalist or adventurer, you’ll find handy tips on what to order at these restaurants listed in the MICHELIN Guide Singapore 2019. 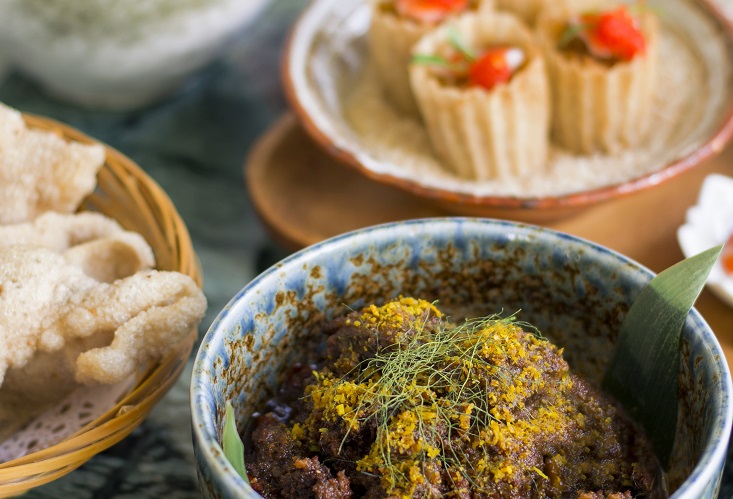 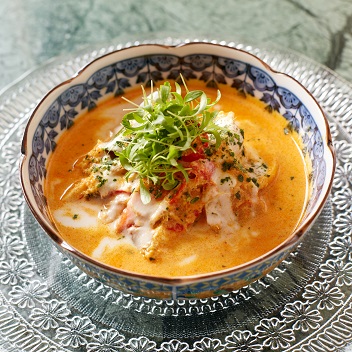 What to order: Lee recommends the Blue Swimmer Crab Curry (left image), and Aunt Caroline’s Babi Buah Keluak, a fork-tender dish slow-braised in a piquant buah keluak (Indonesian nut) sauce. He adds, “This dish highlights the Straits Chinese’s ingenuity to innovate and adapt. It melds the best ingredients and cooking methods from the Malay and Chinese communities.”

Don't miss Chef’s Mum’s Curry, an ode to Lee's mother. He says, “She can transform even the simplest dish into something spectacular. It has the right balance of spice, and isn’t too rich or heavy that you can’t go back for seconds which you will want to.” 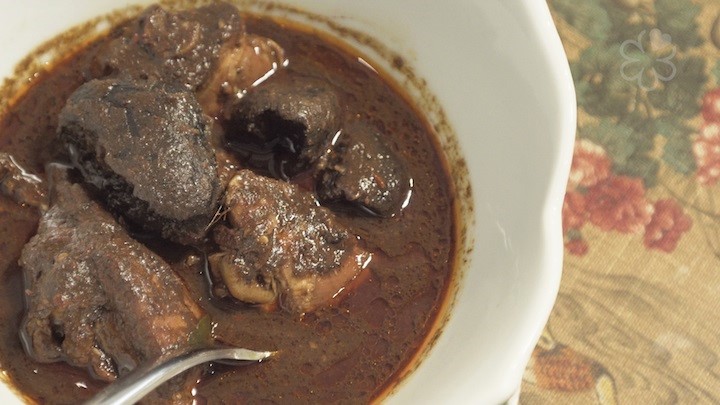 True Blue Cuisine
Bib Gourmand, MICHELIN Guide Singapore 2019
Founded in 2003 in Katong and relocated adjacent to the Peranakan Museum in 2008 where it has stayed ever since, True Blue Cuisine is decked out as a lavish Peranakan household. The space is as much cultural and historical as it is a restaurant, which is brainchild of sixth-generation Baba (male Peranakan), Benjamin Seck. The cuisine here is adapted to be pork- and lard-free to cater to a wider audience.

What to order: You’ll find a Teochew style of Peranakan cuisine, thanks to Seck’s mother, Daisy Seah, a noted Peranakan cook who has left her stamp on other restaurants as well. The signature ayam buah keluak is simmered over charcoal fire, and has an unusual feature: “We do not stuff the black nuts with meat. Instead, we remove the nut paste from its shell, pound it and stuff it back so that diners can savour the flavour of the nut,” says Seck.

BEHIND THE BIB: True Blue Cuisine 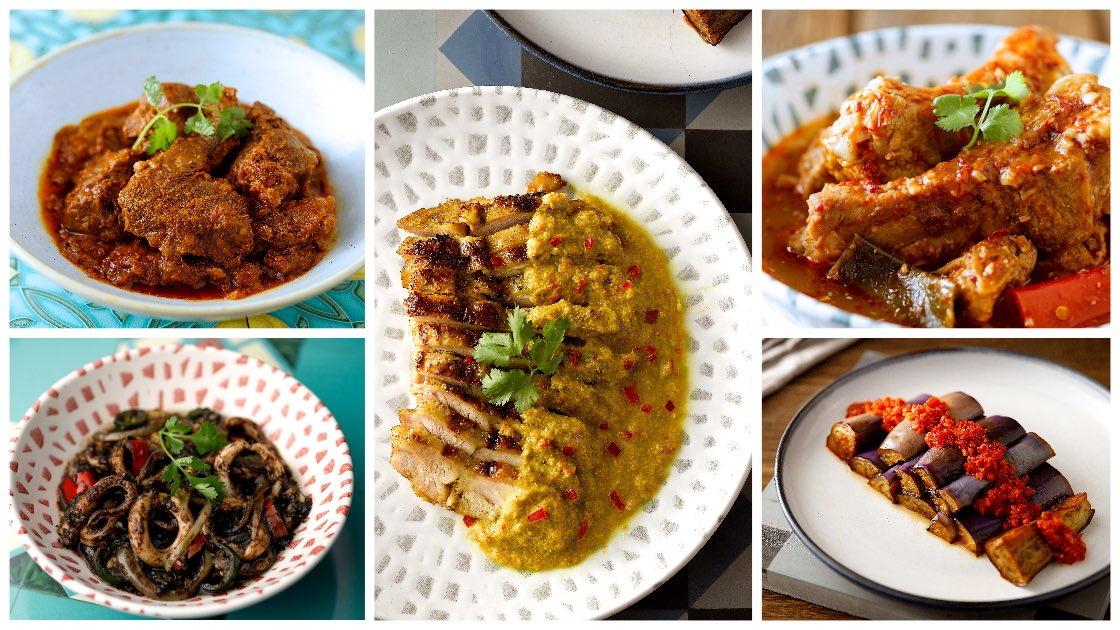 The Blue Ginger
Bib Gourmand, MICHELIN Guide Singapore 2019
Established in 1995 in a three-story shophouse, The Blue Ginger was the modern mover of its time, eschewing the usual traditional wood and antiques décor of other Peranakan restaurants. With contemporary artworks by Martin Loh and a unique interior design aesthetic, the restaurant became an instant icon. In 2020, the second-generation owner, Teo Shi Kai, opened an offshoot and more casual outlet at Great World City.

What to order:  Recipes stay true to the vision of Vivian Seet-Lian, the matriarch of one of the founders. To start, snack on signature dainty cups of Kueh Pie Tee, filled with juicy turnip, bamboo shoots and shrimps. Beef Rendang, a gravy-laden dark stew of tender beef cubes cooked in a spice paste and coconut milk that contains the all-important blue ginger, or galangal, of the restaurant’s name. End with Chendol, where the red beans and jelly is accompanied by fresh squeezed coconut milk and gula melaka – and optionally, durian puree.

BEHIND THE BIB: The Blue Ginger 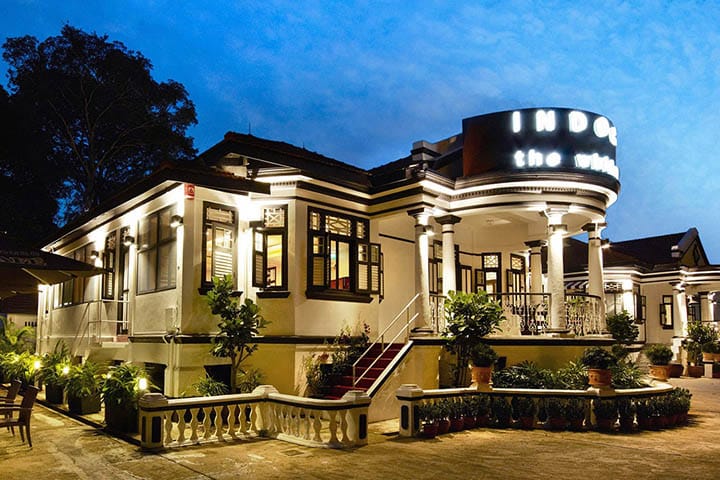 IndoCafe – The White House
Bib Gourmand, MICHELIN Guide Singapore 2019
Newly distinguished with a Bib Gourmand rating in the 2019 guide, IndoCafe – The White House restaurant takes its name after the stately colonial black and white bungalow that it resides in, as well as the coffee company IndoCafe. The elegantly timeless décor sets the tone for a modern and refined style of Penang-accented Peranakan cuisine, which differs from Singaporean Peranakan in many ways. The restaurant began operations in 2012 and is a sister establishment of one-MICHELIN-Star Buona Terra next door.

What to order: The IndoCafe Otah Klasik is presented chawanmushi style, steamed egg custard with fish fillet, seasoned with creamy coconut milk and an addictive spice blend. This is also one of the best spots in town for Assam Laksa, the Penang speciality which uses tamarind in a tangy spicy fish soup. If you prefer a main course in a similar assam gravy, the Kari Kepala Ikan or snapper fish head curry comes with lady fingers and tomatoes in a deliciously piquant stew, eaten with rice. Round off your meal with Bubur Cha Cha, the comforting Nyonya dessert soup comprising yam, sweet potatoes and banana, redolent of warm coconut milk. 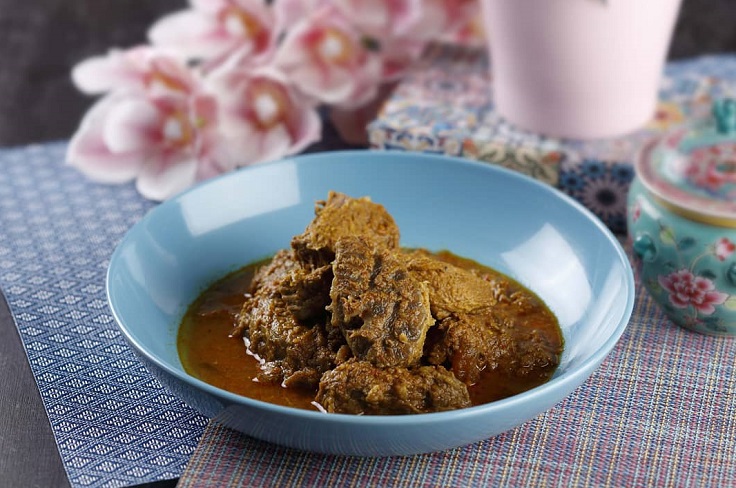 Chilli Padi (Joo Chiat)
MICHELIN Plate, MICHELIN Guide Singapore 2019
Chilli Padi's roots trace back to 1997 when they opened their original outlet in Tiong Bahru. The restaurant subsequently relocated to historical Peranakan enclave Katong in 2002 and was acquired by ABR Holdings in 2017. Today, it’s a large operation with two catering arms and a café in the west, but the heart of its cuisine resides at the red-hued shophouse where some recipes from renowned consultant chef Jolly Wee still hold sway. They received a MICHELIN Plate recommendation in the 2018 and 2019 guide.

What to order: Long-time diners swear by the Nonya curry chicken, which is richly creamy and differentiated with more spices and belachan. This would be a good place to try homey Nonya Chap Chye, a claypot braised vegetable stew with mixed vegetables, and Babi Pongteh, a braised pork dish using fermented bean paste and soy sauce. The salty intensity of the bean paste when slow-cooked with shallots and palm sugar adds soothing flavours to the tender meat.

Straits Chinese Nonya Restaurant
Michelin Plate, MICHELIN Guide Singapore 2019
Now headed up by the third generation of the family, Straits Chinese lays claim to being Singapore’s first and longest running Peranakan restaurant since 1953. The restaurant was founded by Yap Chee Quee, a Hainanese immigrant who started out as a cook for wealthy Peranakan families, including the prominent Chew Joo Chiat family. Today, the brand has multiple outlets, including the branch at Cecil Street which received a MICHELIN Plate nod.

What to order: A must-order is the signature Nonya Assam Pedas Fish, which is a whole pomfret fish simmered with pineapple and appetisingly tangy spices. Crisp morsels of Ngoh Hiang wrapped in beancurd skins and deep fried is a favourite, and they have innovated to offer both the traditional pork version as well as Impossible meats vegetarian version. 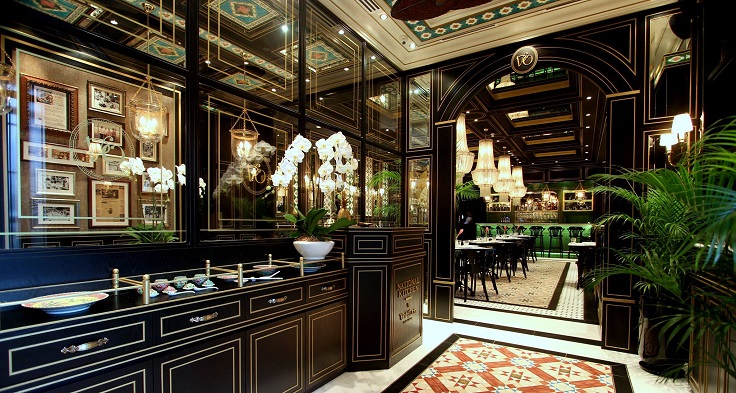 What to order: Time-honed recipes include the one for Pong Tauhu Soup, here styled as a homemade Nyonya prawn ‘bisque’ with the essential bamboo shoots, and prawn, chicken and beancurd dumplings. The VO Curry Chicken uses Oon’s special Nyonya curry powder, curry leaves and coconut cream, but it is the Kuay Pie Tee that has Oon nostalgic for the times she spent learning how to cook from her aunts.

When it comes to flavourful Asian dishes, the secret to wine pairing is in the sauce, shares Wolf Blass Brand Ambassador Catherine C Wong.