British-Hainanese dishes, a cake counter and an expanded retail line are some of the new features at the Peranakan chef’s flagship restaurant.

Growing up in the 1960s, Singapore cooking doyenne Violet Oon (main image, right) fondly remembers dessert detours to the famed Magnolia Snack Bar at Capitol Theatre in Stamford Road. “Banana split and butterfly cake,” the 69-year-old says in a heartbeat when asked what she always ordered.

Besides Magnolia Snack Bar, Oon also waxes lyrical about the pioneer wave of home-grown steakhouses and Western restaurants from that era that were helmed by Hainanese chefs, who had picked up Western cooking from working in British households. Over lunch, she rattles off a list of Hainanese-led eateries at Raffles Hotel and at the now-defunct Cockpit and Seaview Hotels, on top of restaurant chains like Jack’s Place and Han’s.

Oon is paying tribute to Singapore’s colonial cafe culture with her latest and most ambitious project to date — her fourth restaurant, which is also her largest at 100 seats. The new flagship Violet Oon Singapore opened at ION Orchard last week. 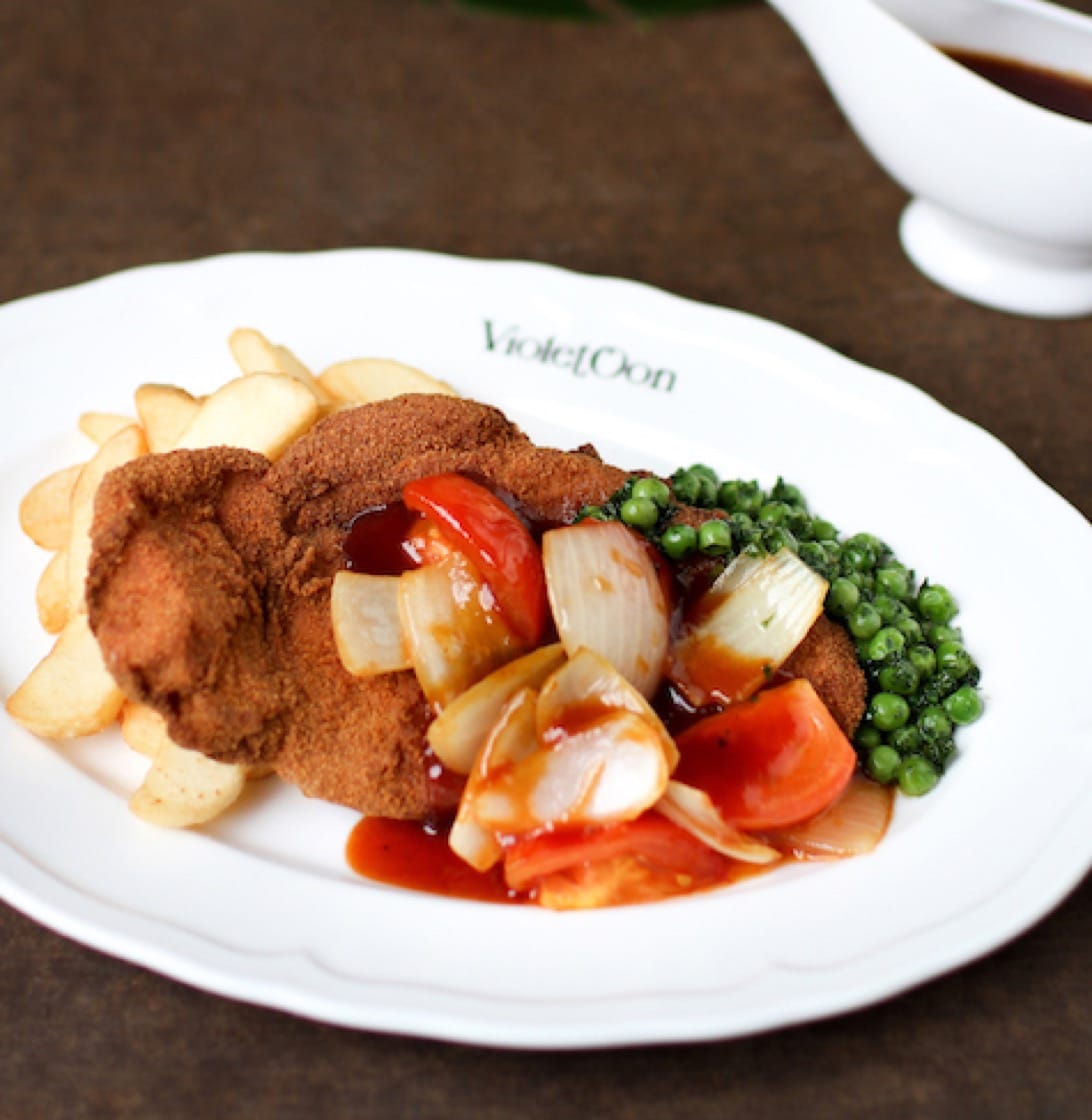 The classic Hainanese pork chop is a golden cream cracker-battered slab of juicy Kurobuta pork loin served with steak cut fries and peas. (Credit: Violet Oon Singapore)
Recognising the prominent Hainanese influence on Western restaurants and cafes here, Oon has included more than five British-Hainanese dishes, on top of Peranakan and Singapore dishes at her latest restaurant. About half of dishes on the menu are new.

On delving into Singapore’s colonial culture for her fourth restaurant, Oon says that each of her restaurants zeroes in on a facet of the Singapore food culture. “These are dishes that I have grown up eating and I am surprised that the Generation X also places much sentimental value on old-school cafe dishes.”

To come up with British-Hainanese dishes, Oon tapped on her encyclopaedic memory of the Singapore dining scene, having interviewed and learnt from chefs and home cooks from her days as a newspaper food critic in the 1970s. She adds that she also has a strong affinity with British food, having spent her childhood in London where her father worked as an executive with petroleum giant Shell.
Advertisement
Advertisement 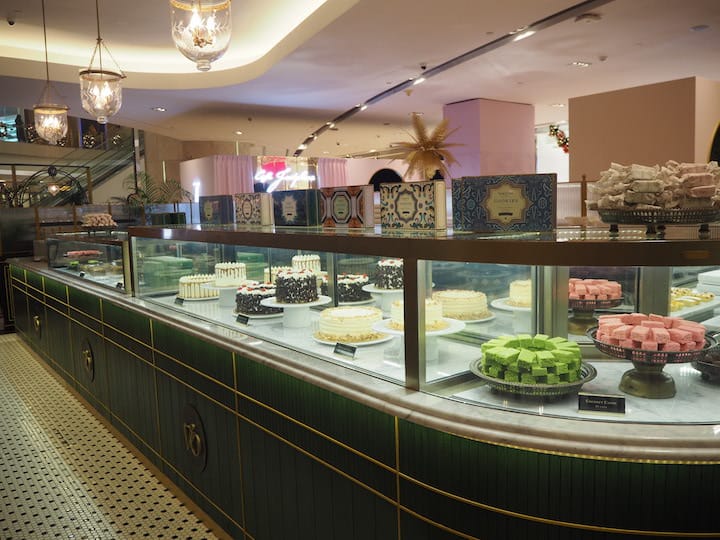 The cake counter will feature about six English-style cakes and an assortment of sweets. (Credit: Kenneth Goh)
Besides British-Hainanese food, the 2,700-square-feet restaurant also sports a cake counter featuring six types of cakes, such as the rum-spiked gula melaka tea cake, black forest cake and famous carrot cake, which was last seen at her now-defunct Takashimaya food hall kiosk two decades ago.

There is also a retail section that takes up about a quarter of the space. It carries 16 products including cashew nut, peanut and sugee cookies, bright green and pink coconut candy, pineapple tarts, mini sugee financiers and bottles of kaya spread. These products, which are packed in boxes fashioned after colourful Peranakan tiles, are produced in a central kitchen.

Tay Su-Lyn (main image, left), Oon’s daughter and a director at Violet Oon Singapore, says that having a complete merchandise section was “the plan from day one”, when the Oons partnered with businessman Manoj Murjani to revamp the Violet Oon Singapore brand in 2015.

Tay says: “These food products are an archive of my mum’s long-time recipes and people can take home a piece of the Singapore story through these food gifts that are representative of our culture.” 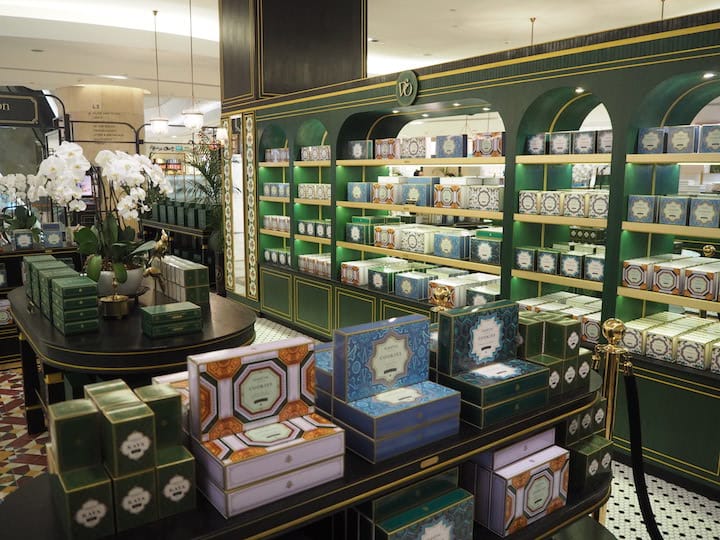 Violet Oon Singapore's retail line carries cookies, sweets and kaya spread. (Credit: Kenneth Goh)
Production of these retail products looks set to scale up when the fifth outlet of Violet Oon Singapore opens in Changi Airport’s Jewel complex, targeting the hordes of tourists who could be on the look-out for food souvenirs. In the pipeline are jams, sauces and sambal. The 120-seat restaurant, which will sport an indoor veranda look, is slated to open at Jewel by the middle of next year.

Tay also reveals that the team has spent much time scouring for possible overseas locations for the Violet Oon chain last year in cities such as London, New York and Hong Kong.

London seems to come up tops in the expansion plans. She says: “It has a vibrant food scene and people there are used to Asian food. Besides, we share a affinity being a former British colony. However, we need to get the core foundation of ensuring the flavours of our dishes remain consistent.”
Advertisement
Advertisement