It takes heart and passion to not only preserve but actively propagate a culinary legacy across generations and geographies.

It takes craftsmanship to orchestrate the symphony of flavours that is Sichuan cuisine, to weave together all the elements that give rise to the cuisine’s complex flavours. In the hands of a master, heat, spice, salt, sweetness, bitterness, acidity, fragrance and the characteristic tingling sensation come together in harmony and balance.

Executive sous chef Ling Heng Yao of Shisen Hanten is not one to shy away from flavour and all its creative expressions. After all, he works closely with both executive chef Chen Kentaro and his famous father, Iron Chef Chen Kenichi, to showcase their family’s legacy and signature Japanese-inflected Sichuan cuisine at their two-MICHELIN-starred Singapore outpost.

Akasaka Szechwan Restaurant, or Shisen Hanten as it is popularly known in Japan, was started in 1958 by the late Chen Kenmin who is regarded as Japan’s “Father of Szechwan Cuisine”. “When I first started my training with the Chen family in Japan, I was moved by their dedication towards their craft, their heart for the team and most of all, their determination to preserve this Chinese cuisine and culture,” he says.

With the restaurant’s rich legacy at the forefront of his mind, Ling was particularly inspired by the Five Rare Crafts that The Balvenie maintains in whisky making, drawing parallels between the restaurant and the whisky house’s deep-rooted respect for tradition and legacy. 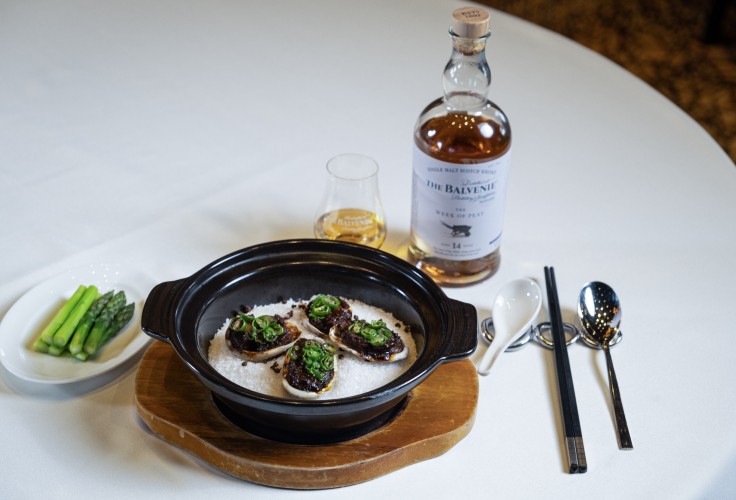 Shisen Hanten's Salt-baked Live Abalone with Szechwan Sauce, paired with the honey, vanilla and citrus notes and a delicate layer of smokiness in The Balvenie's The Week Of Peat.

The legacy of craftsmanship lives on at The Balvenie, the only distillery in the Scottish Highlands that maintains the Five Rare Crafts of whisky making. These encompass its home-grown barley, the traditional maltings, in-house maintenance of its copper stills, in-house cooper, and its malt master, David Stewart, who has worked with William Grant & Sons for 59 years and is one of the longest-serving whisky legends in the industry.

“We’re similar to The Balvenie in our respect for heritage, tradition and craftsmanship," Ling says.

“Cooking from the heart to preserve this legacy is what I find purpose in as a chef.” 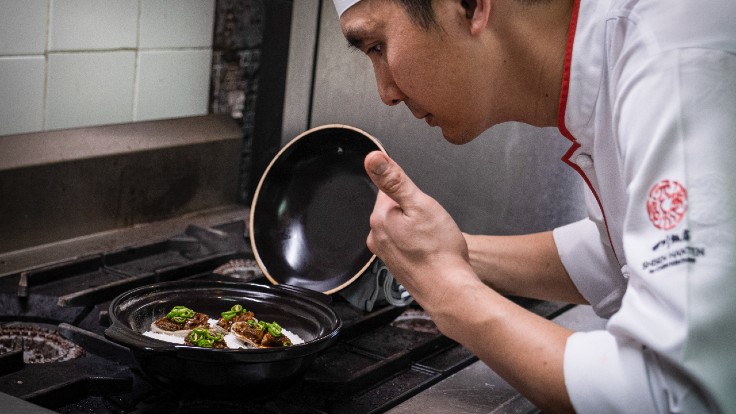 While the Chinese dinnertime tradition is to drink baijiu, a high-proof colourless Chinese grain spirit, Ling is excited to uncover new dimensions of flavour by pairing and infusing his Sichuan creations with The Balvenie’s handcrafted whiskies. 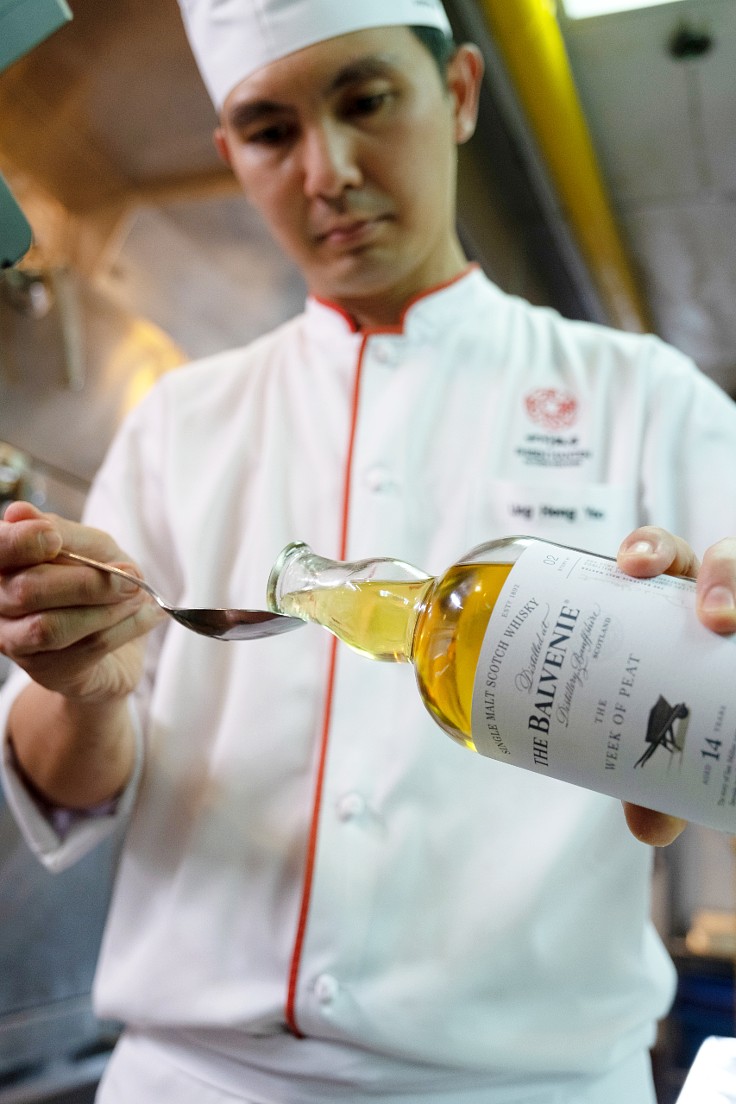 “Many people might think that Sichuan cuisine does not pair well with whisky, but in fact, the cuisine’s characteristic numbing spiciness, aromatics and freshness can really ignite new sparks when paired with The Balvenie,” he says.

The chef was enamoured by The Balvenie 14 Year Old The Week Of Peat from the very first whiff. The peated malt, distilled just for a week in a year, results in a whisky rich in honey, vanilla and citrus notes, with a layer of delicate smokiness. “I wasn’t expecting anything like it. It has a very unique aroma with a distinct smokiness that left a deep impression on me. I thought of smoked seafood and the umami of our Sichuan chilli sauce.”

Inspired, he consulted with Chen Kentaro in Japan and created a new dish of salt-baked abalone with Szechwan sauce.

The freshness of the ingredients is a key cornerstone of Shisen Hanten’s cuisine, and the prized shellfish is procured live from the restaurant’s walk-in tank room. The abalone is shucked and quartered into bite-sized chunks then marinated in the restaurant’s signature sauce, a heady mix of sweet bean sauce, sweet fermented rice, salted black soy bean, tingly Sichuan peppercorn oil and Pixian doubanjiang—the highest quality fermented broad bean paste that is the soul of Sichuan cuisine.

The marinated abalone is then placed back in its shell, set on a bed of toasted salt in a claypot and topped with Japanese shishito peppers before being salt-baked over high heat for three minutes. Once piping hot, the dish is served with a splash of the whisky, imbuing the shellfish a smoky kiss. “When you eat this, you will taste the spiciness and numbing sensation, followed by the fresh sweetness of the seafood. The addition of The Week Of Peat adds that finishing touch of smokiness,” describes Ling. 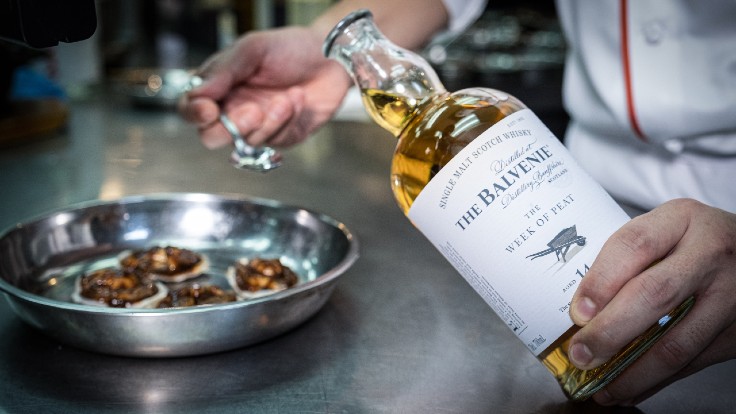 Chef Ling adds a splash of The Week Of Peat to imbue the subtly sweet flavours of the abalone with a smoky kiss.

The chef also found himself drawn to The Balvenie DoubleWood 17 Year Old, a whisky matured first in American oak barrels, which impart soft sweet vanilla notes, before being transferred to European oak sherry casks, where the second cask ageing adds rich spicy flavours and a depth and fullness of flavour. “This whisky is beautifully balanced, with a fruity sweetness that I thought would pair well with a rich soup.” 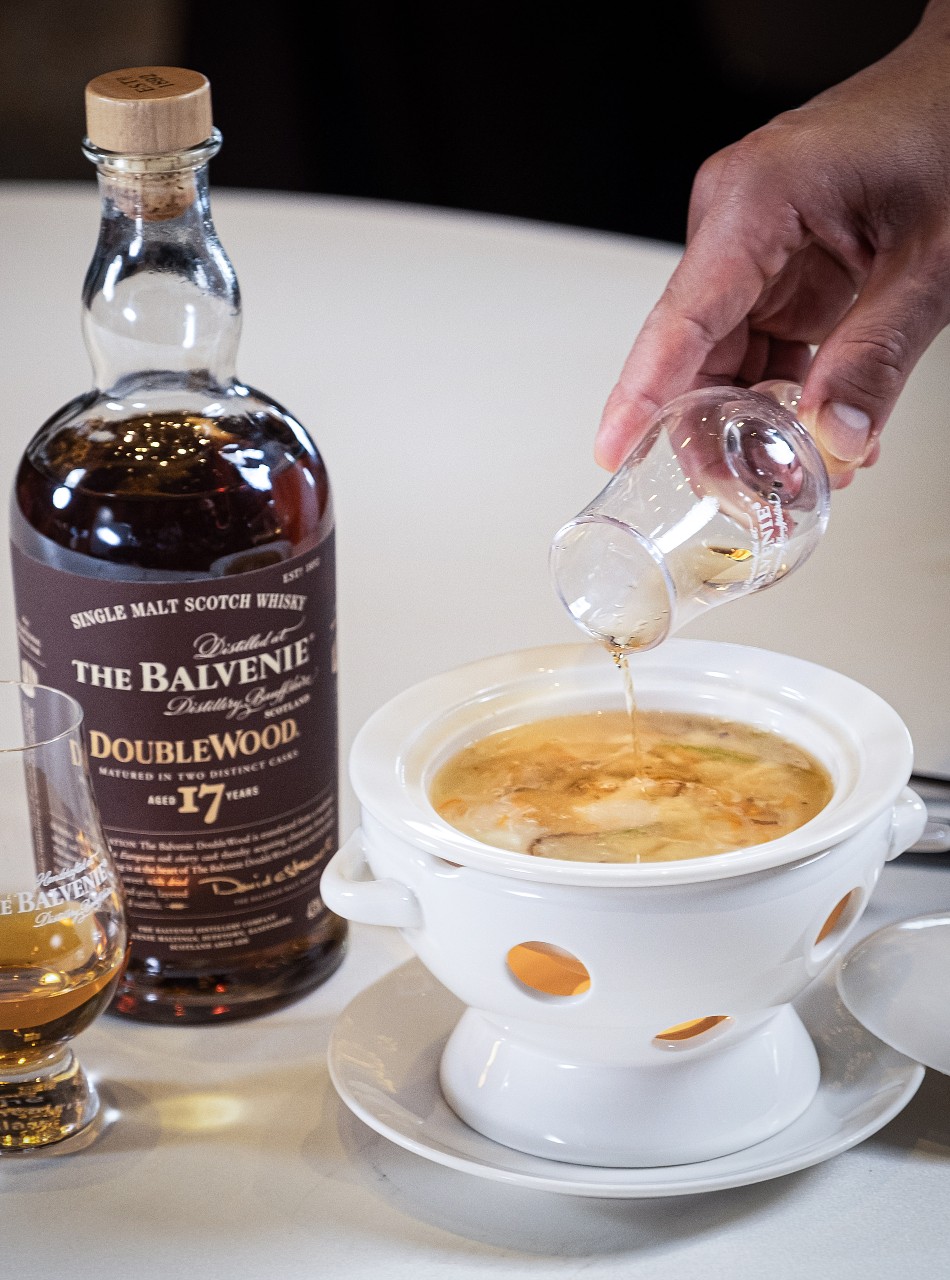 First, Ling steams and deshells meaty Dungeness crab, selected for its natural sweetness and firm texture. Then, he prepares a broth of free-range chicken stock, dried scallop, hairy gourd and wood ear fungus and adds in the crab meat.

The soup is served with a dram of 17 Year Old DoubleWood on the side and guests are encouraged to sip the soup and the whisky alternately, or pour in some of the whisky into the soup before enjoying it together.

“As you’re enjoying the soup, you’ll be able to taste the sweet flavours of the crab meat, as well as the dried fruit, honey and vanilla notes in the whisky—they elevate each other,” he explains.

“Here at Shisen Hanten, we hold fast to traditions, but we also embrace creativity boldly. Sichuan cuisine is not just about mala, or numbing spice, it is about balancing layers upon layers of complex flavours perfectly on each plate,” Ling says. “What we serve is not just Sichuan cuisine, but a philosophy and know-how that have been passed down through three generations. A meal at Shisen Hanten is filled with the warmth of home and family—it is just like coming home.”