At this one-MICHELIN Star-restaurant, you will not find any flavours that are not naturally found in Italian culture. Founder and chef Roberto Galetti will not allow it. After all, in 2003 he named his restaurant Garibaldi, after the decorated general who fought from south to north to put Italy in one piece. “Likewise, we unify the flavours of Italy,” explains Galetti.

Galetti arrived in Singapore in 1999, after starting his career in culinary school and travelling the world to further his craft. Leaving his hometown of Brescia, he worked in London, Salzburg, Buenos Aires, Tokyo and finally Singapore, where he has made his home and even taken up Singaporean citizenship. “I dreamed of a restaurant that could stay open 20 years or more, to give stability to my team and respect to the customers that support us,” says the skilled chef, whose conviction has earned Garibaldi a MICHELIN Star every year since 2017.

“Balvenie has the Five Rare Crafts of whisky making, similar to elements that we have in the Garibaldi kitchen.”

Passionate craftsmanship
Creating exciting new dishes is an endeavour that requires all the skills, experience and imagination of the chef. Pairing these dishes with The Balvenie single malts then takes it to another level. Galetti describes, “When I taste The Balvenie whiskies, I try to identify the taste, the flavour, and the perfume. I visualise the ingredients it brought to my mind, such as the creaminess that reminded me of burrata, the fruitiness that recalled figs, and also nuttiness, which seemed to resonate with oven roasted flavours. I then use these perceptions to guide the creation of the dishes.”

After finding out The Balvenie’s Five Rare Crafts of whisky making, Galetti realised that these elements were very similar to elements in the kitchen. “They carefully select the malt, just as we select quality ingredients. The way we treat our ingredients, is how they treat their cask. And I recognise in my role as a chef, the role of the malt master, where I combine ingredients, find the philosophy behind the product, put everything together, and make sure there’s balance.” 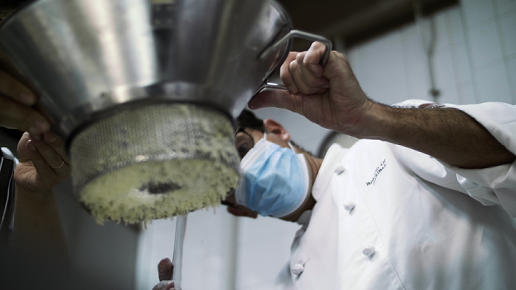 Galetti is referring to The Balvenie’s handcrafted ethos, as the only distillery in the Scottish Highlands that still maintains the Five Rare Crafts of whisky making. These encompass its home-grown barley, the traditional maltings, in-house maintenance of its copper stills, in-house cooper, and its malt master, David Stewart. 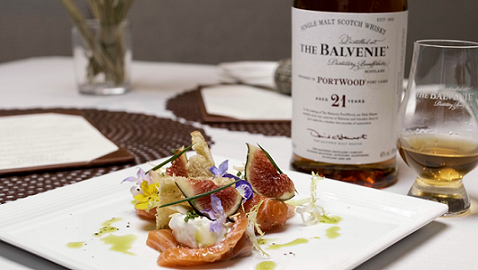 A complex appetiser
The first dish is a symphony of hardworking ingredients: the freshness of burrata cheese made in Singapore, Scottish salmon lightly smoked with a touch of whisky, lemon zest for a touch of acidity, toasted almond that brings out the nuttiness of the whisky, fresh figs that echo the fruitiness of the whisky’s palate, and made-from-scratch focaccia bread. The chosen whisky is Galetti’s favourite, The Balvenie 21 Year Old PortWood. “I really hope that the customer that will taste my dish will find what I found when I tasted this whisky. To be able to feel it, all the flavour that’s inside, on my plate,” says Galetti.

The vibrant salmon is filleted from a whole fish, which Galetti demonstrates. He removes the skin, then expertly carves a fillet by keeping the knife close to the spine bones, minimising waste. Further small bones have to be picked out one by one. A portion of fillet is then lightly smoked and marinated for 10 minutes with drops of The Balvenie 21 Year Old PortWood, with some grated lemon zest and olive oil. “I also found that I needed to add something toasty, to bring the flavour of the oven, so we use our own toasted focaccia bread,” he adds.

The Singaporean-made burrata is a joint project between Galetti and an Italian partner. “Burrata is a typical Italian starter eaten fresh, that complements the start of the meal,” he says, noting that it’s combined with another fresh element, the lightly smoked but still raw salmon. “Whisky is not something you drink like a big glass of water,” laughs Galetti, which gave him the idea of presenting this dish as a combination of small bites, to enjoy as you sip and eat alternately. 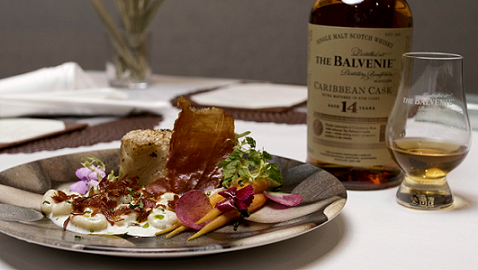 The Perfect Pairing “Italy is a peninsula, it’s surrounded by sea. A variety of fish and crustacean bring value to Italian cuisine, with a lot of ways that dishes can be cooked,” expounds Galetti. While he wouldn’t serve a fish not found in Italy, for instance parrotfish, he is receptive to sourcing for ingredients from around the world when they are in season or more convenient. For instance, salmon and seabass are both part of the Italian diet, and he’s chosen Scottish salmon to honour The Balvenie’s Scotch roots, and Chilean seabass for its distinct fattiness.

In this dish, the gnocchi is made from scratch from potato, flour, egg, Parmesan, nutmeg and chef’s special touch – vanilla, which he’s evenly folded into the mix. It’s a flavour which he particularly enjoyed in The Balvenie 14 Year Old Caribbean Cask, and here it gives a fragrance to the soft and melt-in-the-mouth gnocchi.

The seabass is first pan-fried, then brushed with a mixture of honey and some of that Caribbean Cask single malt. The mixture helps the hazelnut and breadcrumb crust stick to the fish as its oven roasted to perfection. A mascarpone sauce adds creaminess that cuts through the fattiness of the seabass, while a crisp oven-roasted sprinkle of San Daniele ham is the secret ingredient that pulls together the dish with each sip of whisky. 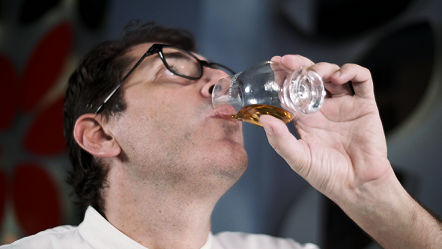 Pushing yourself to the limit
“We constantly have to apply craft to our job to grow and gain in experience,” Galetti says of the competitive F&B industry. He maintains an open door for his staff to speak to him, as he grooms the next generation to step up. He concludes with the encouragement, “If you are determined to learn, there is nothing that can stop you, and your craft will improve day by day. There’s nothing more rewarding than the challenge to improve yourself. Keep going.”

Garibaldi x The Balvenie
From 20 November to 20 December, the whisky pairing dishes will be available at Garibaldi by prior reservations. Contact them by phone: 6837 1468 or online here.