In Madame Fan’s kitchens, the woks roar while the dim sum baskets glisten with hot steam rising briskly. It is through these fiery processes that the most delicate and finessed Chinese cuisine is forged, from the clearest soups to the most intricate dumplings. “Chinese cuisine has thousands of years of history, and the traditions of Cantonese cuisine have been preserved till today. I feel it is my responsibility to continue passing them on,” says the restaurant’s executive Chinese chef Mike Tan Wen Sian, who counts more than 30 years in this profession.

Tan started his career in Singapore as a kitchen helper at just 17 years old, and his dedication to his craft has since brought him around the world. In 2009, he was selected to join Hong Kong restaurateur Alan Yau’s team for the opening of Hakkasan Miami as its chef de cuisine. In 2018, when Yau first envisioned the modern Chinese restaurant for his bold multi-concept lifestyle destination, NCO Club, in Singapore, he again sought out Tan to turn his dream into reality. At Madame Fan, the cuisine is a juxtaposition of the traditional and the progressive, earning it a MICHELIN Plate recognition in 2019.

Creativity Through Craftsmanship
Tan’s dishes strike a delicate balance: he uses ingredients that keep to the Cantonese heritage and stay true to the recipe’s flavour profile even while giving creations a modern take. He explains: “After being a chef for 30 years, the most important thing for me is to have strict control over the ingredients you select, because ingredients are the soul of the dish.”

“I enjoy working with The Balvenie because we share similarities in our respect for craftsmanship.”

It is in this spirit that Tan was introduced to The Balvenie, the only distillery in the Scottish Highlands that still maintains the Five Rare Crafts of whisky making. These encompass its home-grown barley, the traditional maltings, in-house maintenance of its copper stills, in-house cooper, and its malt master, David Stewart.

“The Balvenie celebrates the heart and passion that Chef Mike Tan puts in his dishes the same way our Malt Master David Stewart does with our whisky expressions. At The Balvenie we believe that it takes more than functional skill and expertise to create something extraordinary, it is the heart that goes into every dish and Balvenie expression that makes it truly special,” says Nigel Ng, head of brand marketing, Southeast Asia at William Grant & Sons.

“I enjoy working with The Balvenie because we share similarities in our respect for craftsmanship,” says Tan. “The Balvenie has a strong emphasis on Five Rare Crafts, which I relate to handmade dim sum, in that only handcrafted dim sum can achieve the delicate quality through the rigorous selection of the cut and freshness of meat, seafood and vegetables.”

RELATED: How Garibaldi's Roberto Galetti Unites the Ingredients of Italy with The Balvenie Whisky 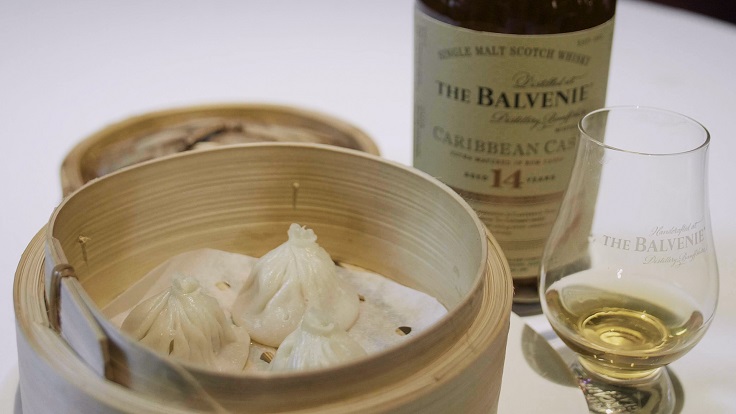 His first dish, Whisky Xiao Long Bao, doesn’t just pair perfectly with the fruitiness of The Balvenie 14 Year Old  Caribbean Cask; it also contains a small measure of the single malt that was used to marinade the pork  within the soup dumpling.

To prepare this dish, his team of experienced dim sum chefs use a hot water dough technique to create the  dough that will roll out into thin yet elastic, soft and almost semi-translucent skin that’s strong enough to  hold the hot soupy fillings. Notes Tan, “All of our dim sum at Madame Fan is handmade by our chefs to control the thickness of the skins. Our chefs put in all their skills and spirit into this, it is something that cannot be replaced by machines.”

The Perfect Pairing
Once the dough is rolled into the ideal size, the whisky-infused pork filling and congealed stock is encased  into the dumpling using 18 to 20 folds for the ideal texture. After that, it just takes a few minutes of steaming on a lined bamboo basket to perfect the dish. A few sips of the well-rounded flavour of the 14 Year  Old Caribbean Cask works well to extend the lingering flavours of the dish, Tan recommends. 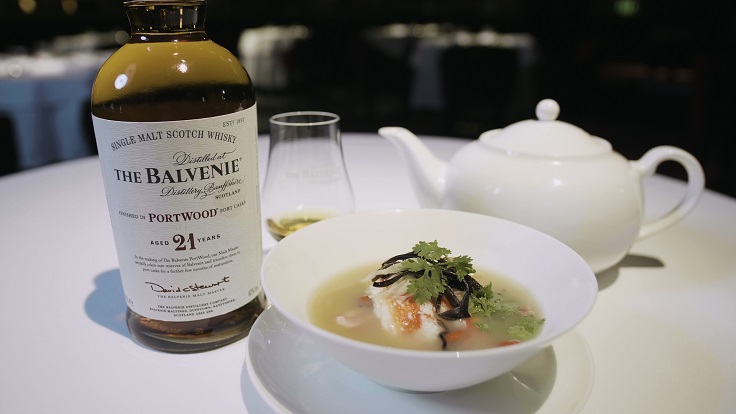 In the second dish, he was again inspired by the intricate art of Cantonese soup-making to create a  compatible match for The Balvenie 21 Year Old PortWood single malt whisky. Having tasted the whisky, Tan found its silky texture and refined honeyed spice notes a foil for the sweetness and freshness of Alaskan King  Crab. By gently poaching the crab meat in a stock that is also accented by the same whisky, he’s created a subtle yet complex, full-bodied dish that is enhanced by aerating it from a teapot. He named the dish  Bridges, as it marries the worlds of Chinese cuisine and Scottish whisky. “It is best if you take alternative sips  of the soup and the whisky for the best experience,” he adds. 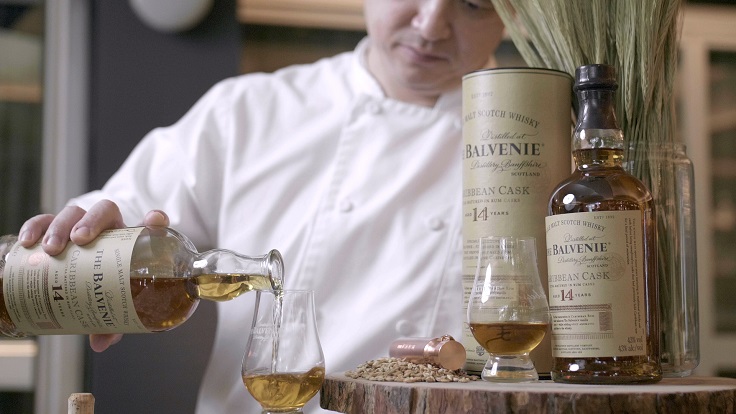 At the end of the day, Tan looks back with pride at what he’s achieved at Madame Fan. “When all our chefs work together to create a good dish; when our customers are happy; when we see that we have met or even exceeded our own standards; that’s when the sense of fulfilment comes and the motivation for us to continue giving our best.”

Madame Fan x The Balvenie
From 1 to 30 November, the whisky pairing dishes will be available at Madame Fan by prior reservations. Contact them by phone: 6818 1921, email: dining.reservations@thencoclub.com or online here.