It’s probably every foodie’s dream to be able to walk into a famous restaurant’s kitchen and witness the culinary magic firsthand. But among the chaotic hustle and bustle brimming with unfamiliar ingredients and new techniques, conversations may seem to not make any sense, as the chefs and kitchen team have their own vocabulary. You may have heard these words and phrases before on a celebrity chef’s cooking or reality show, but do you know what they mean?

Now here’s your chance to learn some cooking slang as they use it in international kitchens to give your restaurant meal a little more flavour. See if you can spice up your conversations with some of these terms! 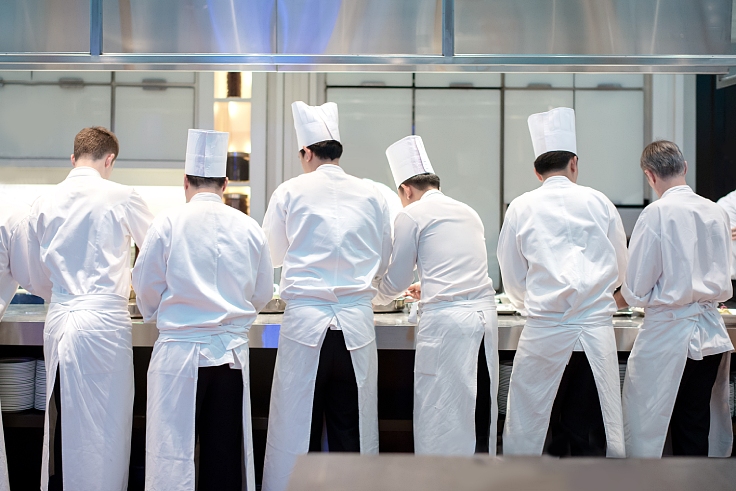 A la minute
This French phrase (say “minute” like it rhymes with “tea boot”) describes a dish that must be made fresh, right at that moment. These items are not prepared in advance, such as sauces pre-made and ready to be poured over a dish.

Behind/ Hot
These are terms you’ve probably heard many times in cooking shows as you watch the chefs rush from station to station. “Behind” and “hot” are warnings to avoid accidents. There are a lot of sharp knives, hot dishes, and heavy pans in a busy kitchen. So, it’s no surprise that Chef Sujira “Aom” Pongmorn of Saawaan, the One MICHELIN Starred Thai restaurant, admits to shouting “behind” or “hot” quite a bit in her kitchen.

Pick up
This is another term you’ll hear frequently in the kitchen. It means that an order is ready to be served. Wait staff who hears “Pick up Table 4!” knows their dishes for Table 4 are ready. This could also be used to describe a deadline. So, “Pick up 8:30 for 100” would mean dishes would need to be ready to serve 100 diners at 8:30 pm. 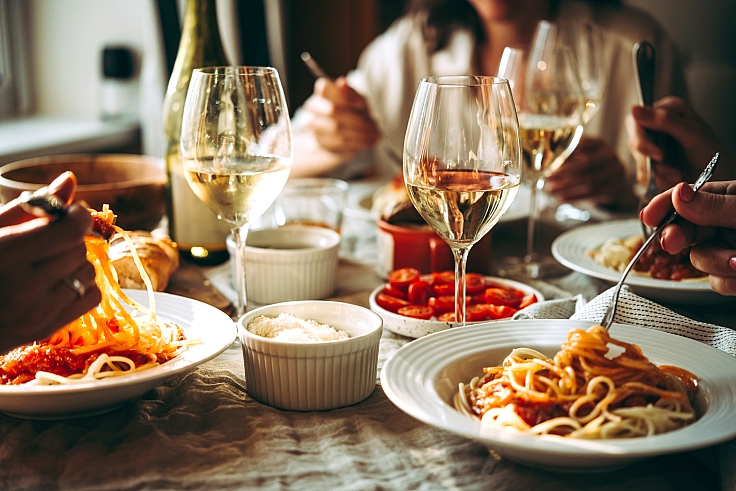 So, did it take "all day" for this to be served to you? (© Shutterstock)

86
Chefs use this when they need to remove something from the menu, usually because they ran out of an ingredient. “86 the salmon special”, for example, if they ran out of salmon. This is an essential communication between the kitchen and the wait staff, making sure the menu is updated. Head chefs will also “86”, or cancel or reject, a dish or preparation that doesn’t meet their exacting standards. The term originated in the Prohibition era in the US, when serving alcohol was illegal. Police officers were paid off to warn the bartenders at Chumley’s in downtown Manhattan to “86” their customers before a raid. That meant to get rid of their clientele by sneaking everyone out through the rear exit at 86 Bedford Street.

SOS
This is kitchen shorthand for “sauce on the side”, either written with an order or said aloud, such as, “I need that salad SOS”. Not a cry to Save Our Ship, but a call for a different kind of help.

All day
No, this is not like Captain America’s “I can do this all day”. In the kitchen, “all day” means how many total orders of a certain dish are needed from the kitchen at that moment. Steve Doucakis, the American chef at MICHELIN Plate recipient Quince explains that saying “3 duck, 8 chicken, 6 pork, and 7 sea bass all day” is not a to-do list for that entire day. It’s how many of each dish must be made at that point in the evening when he calls those numbers out. 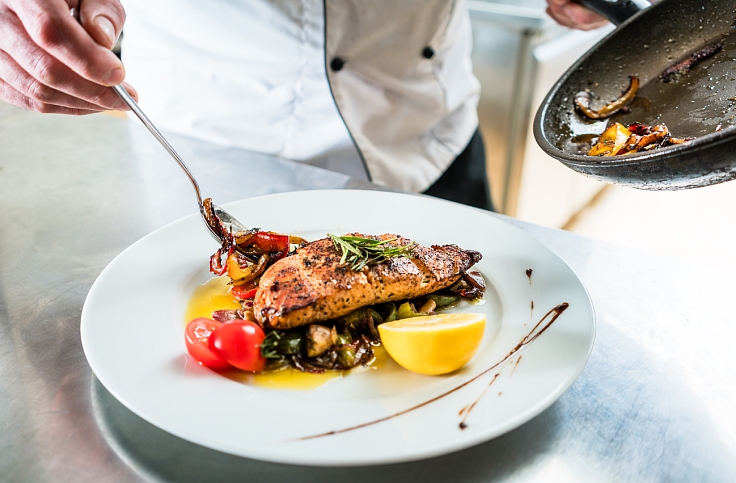 Your dish right before it's time for "pick up"! (© Shutterstock)

On the fly
This is the kitchen’s way of demanding immediate action, usually when it’s discovered that wait staff forgot to hand over an order or the kitchen missed an item. Then they have to make the order “on the fly” to ensure the table gets their order as soon as possible!

Trail
If you guessed this has something to do with going on a hike to shed a few pounds or secretly following someone, you’d be wrong. Well, maybe a little like following someone. It’s more like a second interview. Or an audition. To “trail” in the kitchen is when a chef checks out a potential new cook’s skills in action. You wouldn’t be wrong to think it should be “trial”, as in “trial by fire”.

Kill it
No murder scene to be found here, although some chefs may think so. A chef will say “Kill it” when a customer wants a dish, usually steak, well done. “Kill that tenderloin” is the example US Chef Riley Sanders from One MICHELIN-Starred Canvas gives. But he explains that this term isn’t really used in Thai kitchens, so when someone does say it, most of the time there are just puzzled looks in response. 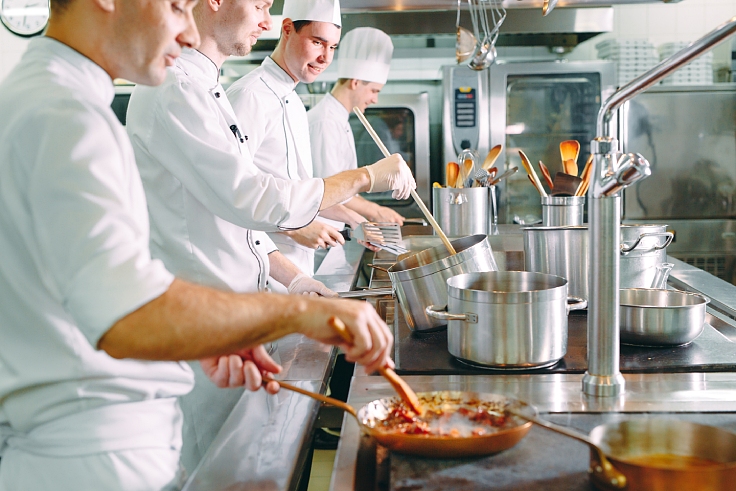 Chefs may not be as cool, calm and collected as shown on a stock image photo... (© Shutterstock)

On deck
This phrase lets others know that an order is being prepared. A chef may call this out so the rest of the kitchen is ready to do their part when the time comes. Or they might say this to the wait staff to let them know their order is almost done, as in “Don’t go on your smoke break now, your order is on deck!”

Mise
Short for “Mise en place”, which means “everything in its place” in French, this refers to the preparation of ingredients and setting up of equipment at a station so that orders can be efficiently expedited. It is believed that this practice began with the legendary Auguste Escoffier, who not only pioneered fine French cuisine but also the modern kitchen brigade system found in restaurants all over the world.

Ticket
This is a ticket to dine, on which wait staff takes a table’s orders and sends to the kitchen to fulfill. Thai kitchens may call this a “ticket” or a “table”, whatever makes most sense to the team.

Flash
If meat isn’t fully cooked properly, a chef may say this to order the meat cooked for another minute or two. Possibly using a culinary butane torch to “flash that scallop!”, which is something Vincent Thierry might say to his team at Chef’s Table, his Two MICHELIN Starred restaurant in Bangkok. 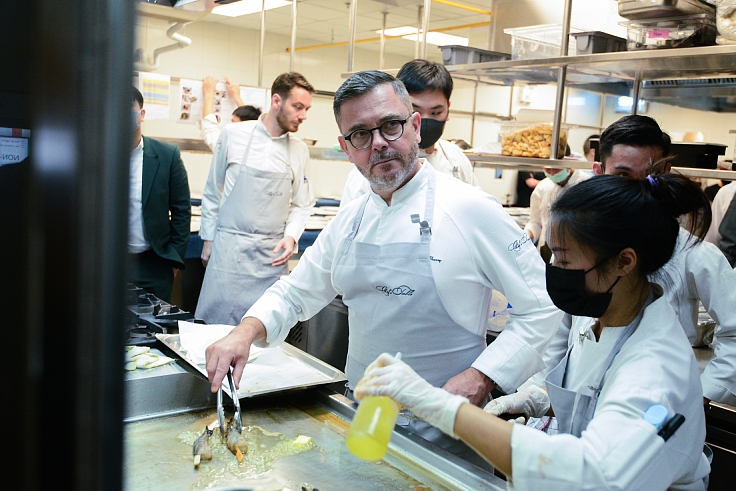 Yes, chef!
This phrase reverberated near and far in the kitchens of Gordon Ramsay’s hit television cooking competitions. It’s how team members acknowledge the head chef’s orders and requests. In strict kitchens, this may be all they’re expected to say -- questions should be asked before things get busy so as to not interrupt the head chef’s flow. Nowadays, many think this is an obsolete way of doing things, insisting that a two-way communication in the kitchen is better. Head chefs who listen to their teams’ opinions and suggestions will get better results.

Stage
Don’t expect a theatre performance when you hear this term in the kitchen. Apparently from the French word “stagiaire”, meaning apprentice or trainee, a stage is an unpaid internship during which a student chef can hone their skills with hands-on experience in the kitchen and the restaurant can get free labour.

Waxing a table
Why would anyone want to wax a table? Wouldn’t the plates slide off? Why indeed. Here in the kitchens, “waxing a table” means to give a table the VIP treatment, as in “Go wax table 4, that’s the owner’s wife there.”

LOOKING FOR DINING OUT IDEAS?: MICHELIN Movers And Shakers: Updates From Sorn, Cadence By Dan Bark, Alain Ducasse, And More In Thailand