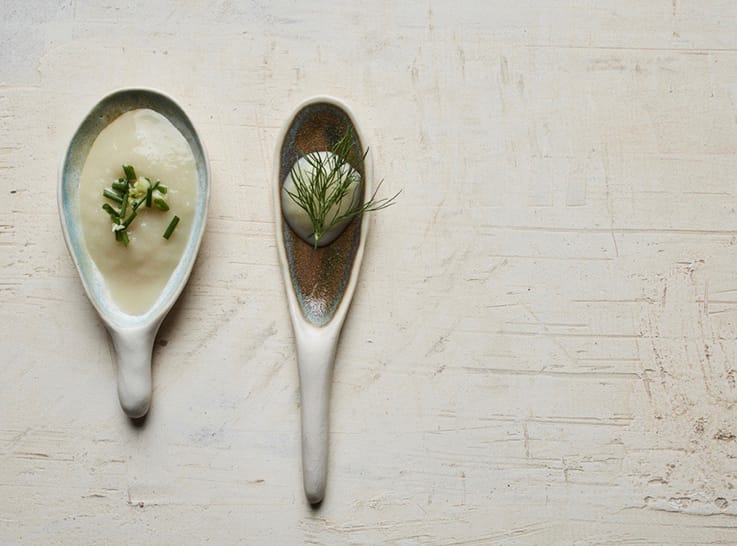 “Earlier this year, Pakta reopened and Albert Adrià came by the studio to select the new tableware for the new menu,” Janelle says. “Some of the designs we drew out together, others were selected from my current collection. He was very specific about the form of the pieces, but he left me with a color palette and let me decide most of the glazes.”

Janelle often works with chefs on unexpected timeframes. “Last summer Grant Achatz and Simon Davies were in Barcelona for a few days and they came by my studio for a tour,” she says. “We had arranged the visit so I had every imaginable piece and color and sample test displayed on any horizontal surface I could find. I hid some of the tests that were maybe a little more difficult to make for a large scale production. They found them, and they ordered them.” 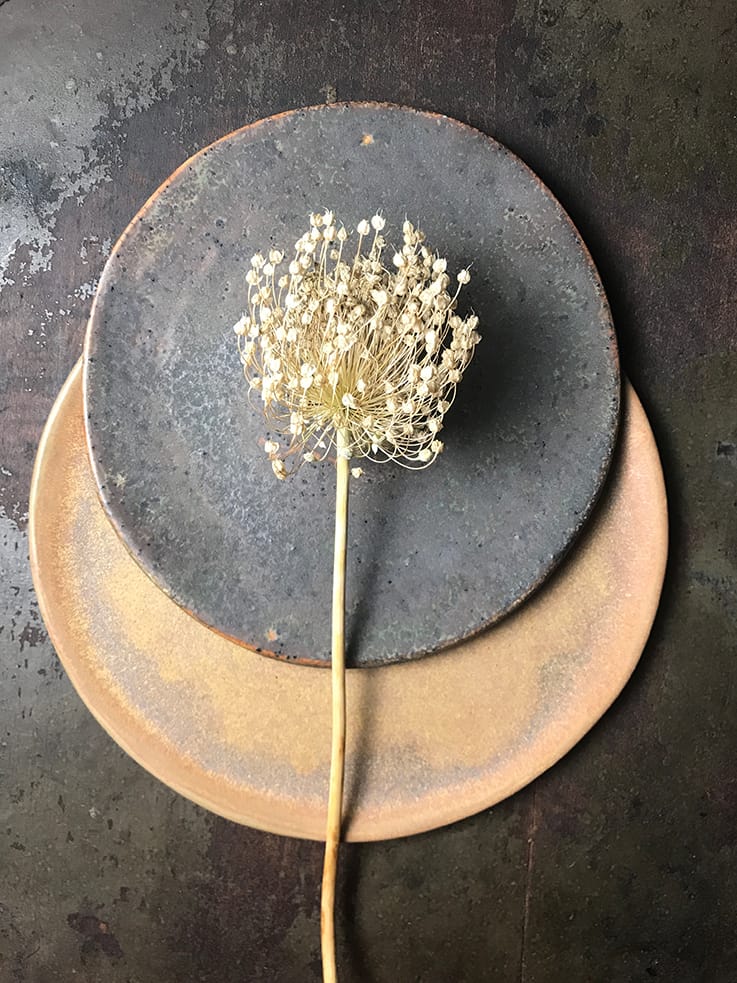 Chef Davies is integrally engaged with Janelle’s process. “Last year, we began a collaboration with her for a dish that was centered around using palo santo as a flavor and pulling from other ingredients found in Central America,” he says. “She made raku plates, using many of the same components found in the food to burn designs onto the ceramics. She created matching copitas and carafes that we place on a burning palo santo log as an accompaniment to the course.”

Spontaneity has proven critical to Janelle’s output as an artist. “My favorite ritual at the end of a big order is to use the last bit of clay that is left over to make a random experiment, with no expectations,” she says. “It is how I come up with many of my new designs. Instead of designing something for a particular use or with a specific dimension, I just make something for myself, my hands deciding.”

Janelle is currently partnering with chefs in London and Barcelona on a pop-up dinner series, and is actively seeking partners for collaboration. Her ceramics will be featured at the much-anticipated Pernoi outside of Detroit slated to open in August.

5 Appliances That Will Make Your Kitchen Smarter

Cooking at home gets breezier with these nifty cooking gadgets that use technology to whip up dishes and drinks in a jiffy.

These new releases from our favourite celeb chefs and food blogs are all for easy everyday meals and won’t just be sitting pretty on your coffee table.

It's time to get started on that Christmas shopping list.

Things to consider for a kitchen you’ll love to cook in for years to come.

Essential herbs for every edible garden

Get on the farm-to-table bandwagon with these 4 essential - and very delicious - culinary herbs.

The Origins of Your Mooncake

Most of the mooncakes you’ve eaten were probably made by this factory in eastern Singapore - but you may never even know it.

The head chef of three-Michelin-starred Osteria Francescana is feeding Rio de Janeiro (and he hopes, the world) one bowl of soup at a time.

Find out what some of these familiar names have to say about their special day.