The executive chef of three-Michelin-starred Alinea in Chicago says his new role is pure happenstance.

When Simon Davies landed the role as executive chef at Chicago’s Alinea after Mike Bagale stepped down in May, it wasn’t a complete shock. “I’d been training for [the position] for such a long time, so it didn’t come as a surprise to anyone at Alinea,” he says. Having worked as chef de cuisine at the three-Michelin-starred restaurant for almost five years, Davies had been adopting more responsibilities in anticipation for what would one day be his role.

It’s a role that wasn’t always in the cards for Davies. Growing up as an aspiring musician in California, he found his love for food through cooking for his friends at house parties. “I was known to cook late night snacks for everyone, using whatever ingredients I could find. There was always a moment when the chaos of the party would stop and everyone would come together to enjoy what was made,” he says. His decision to try his knife skills at culinary school was arguably one of the best he’s ever made. “I’ve always had an affinity for the kitchen but I really chose to start cooking towards the end of high school. When I commit to something, I do it to the best of my ability, so when I chose to enter the world of cooking as a profession, I sought to learn from the best,” he says. And ‘the best’ was Alinea. “When the Alinea cookbook landed in my lap I knew where I wanted to be. So I sent [Grant Achatz] an email and I was invited to go to Chicago to do a two day trail.” The rest is history. 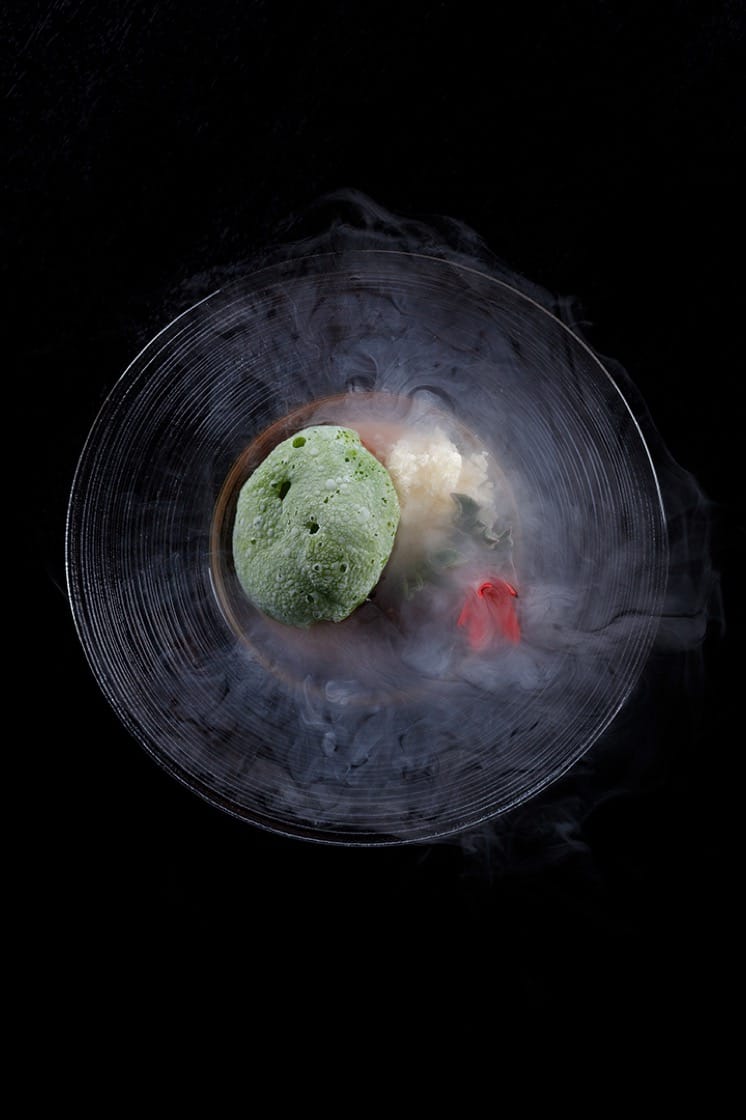 Having started at Alinea as an intern in 2009, Davies’s new position is, if anything, well-deserved. And although it’s bittersweet to accept the position of an old colleague who has chosen to move on (Bagale and Davies started in the same year), the opportunity is certainly more sweet than bitter. “I’m grateful for the opportunity to step into the role after [Mike Bagale],” says Davies. With many years of training under his belt, it’s a role he won’t need much easing into.

Under Davies’s guidance, there have been and will continue to be some shifts. As a new dish is developed, the restaurant evolves. “With each new dish comes a new thought process, technique or ingredient. That drives the change of the restaurant,” says Davies. Some additions to the menu include a scallop dish with noodles manufactured from rice and scallops served with a southern Thai-inspired curry, another is a black octopus dish that utilizes Korean flavors and techniques. “There is also a course in which we revisit a French classic—Rossini (named after the composer Gioachino Rossini). We present and carve wagyu beef table-side, while playing the overture from his final opera for the Gallery and KT experience,” he says.

@ahemberger captured some scenes from an homage to a classical dish and composer Gioachino Rossini.

Two of the biggest developments in the pipeline focus more on the experience and less on the actual food. The first expansion is to incorporate music into the dining experience—unsurprising for a once-aspiring musician. Another project they are working on is with ceramic artist Cara Janelle. “We are working with Janelle to combine the food and service pieces beautifully,” says Davies. The plates Janelle has designed for the pastry course (which is inspired by flavors of Mexico) are fired with some of the same ingredients as the actual dish. In true Alinea style, the changes being implemented are smart and surprising. As Davies says, “The whole philosophy that [Achatz] has created at Alinea is based on change.”