Thai food has become a global phenomenon, adorning the tables of restaurants from Auckland to Zurich. Little do food lovers know the hard work that once went into cooking a traditional Thai meal. Below are the tools once (and in most cases, still) considered essential to the traditional Thai kitchen.

1. Mortar and pestle (khrok sak)
Considered the most important tool in the Thai kitchen, the mortar and pestle play a central role in pounding paste, a mash of fresh herbs, chillies and aromatics forming the base of almost every Thai dish. Unlike the food processor, this tool is ideal for smashing ingredients so that their essential oils are released. The best mortars and pestles in central Thai cuisine are made of granite, although the north and northeastern regions favour those made of wood, which are gentler on ingredients like green papaya for making the all-time favourite som tum Thai salad. 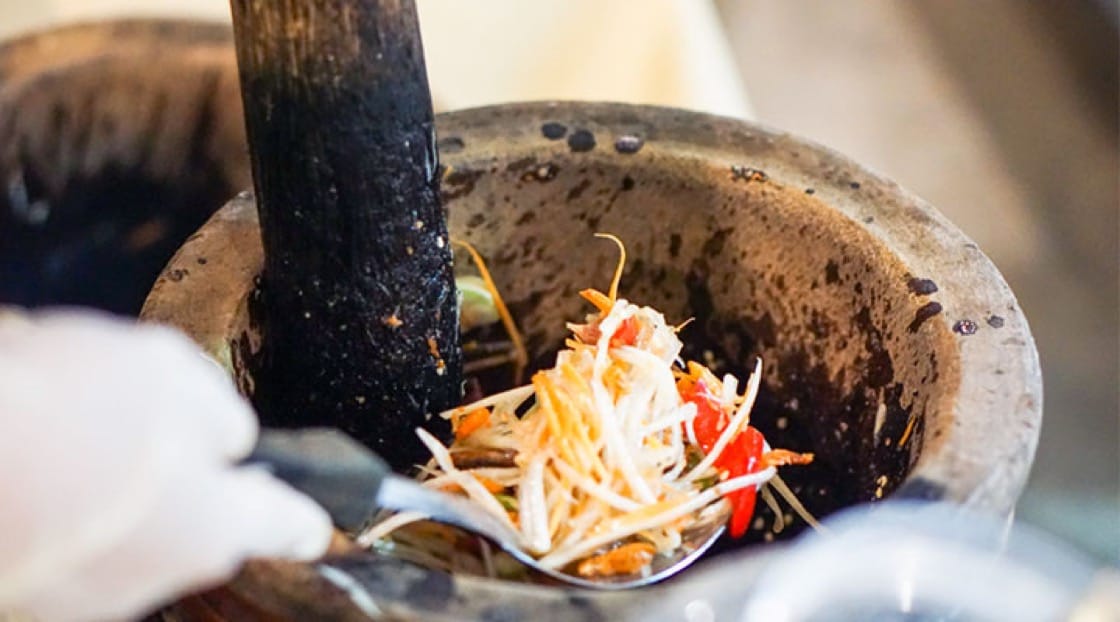 In Northern Thailand the wooden pestle and mortar is favoured because its gentler on ingredients.

2. Coconut shredder (kratai kood maprao)
Named after the Thai word for “rabbit”, the kratai — a metal blade set on the edge of a wooden seat — was once essential to producing coconut milk. The blade, which was angled upwards, resembled a rabbit, hence its name. The meat was then squeezed together with water to form the coconut milk. Although the kratai was invented for easier coconut shredding, female cooks were still expected to sit “politely” with both legs pressed together on one side of the seat. 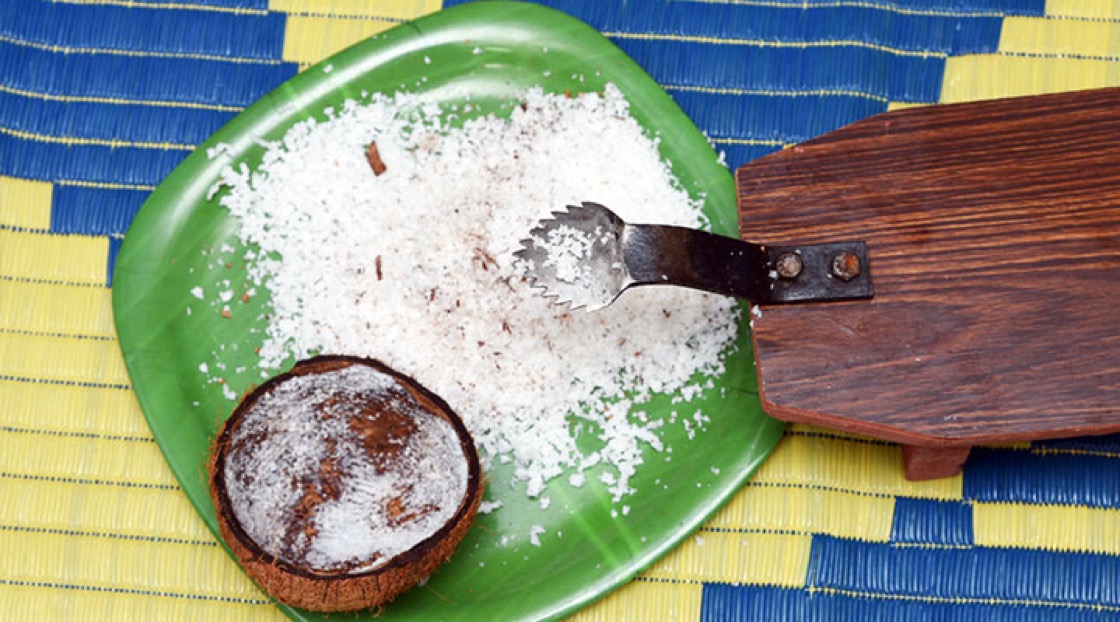 Named after the Thai word for “rabbit”, this was once essential for coconut milk production.

3. Sticky rice basket (gratib)
These woven straw baskets were created to keep sticky rice grains warm and fresh on the table after steaming. Often accented with bright colours, they still play a big role in northern and Northeastern Thai meals. 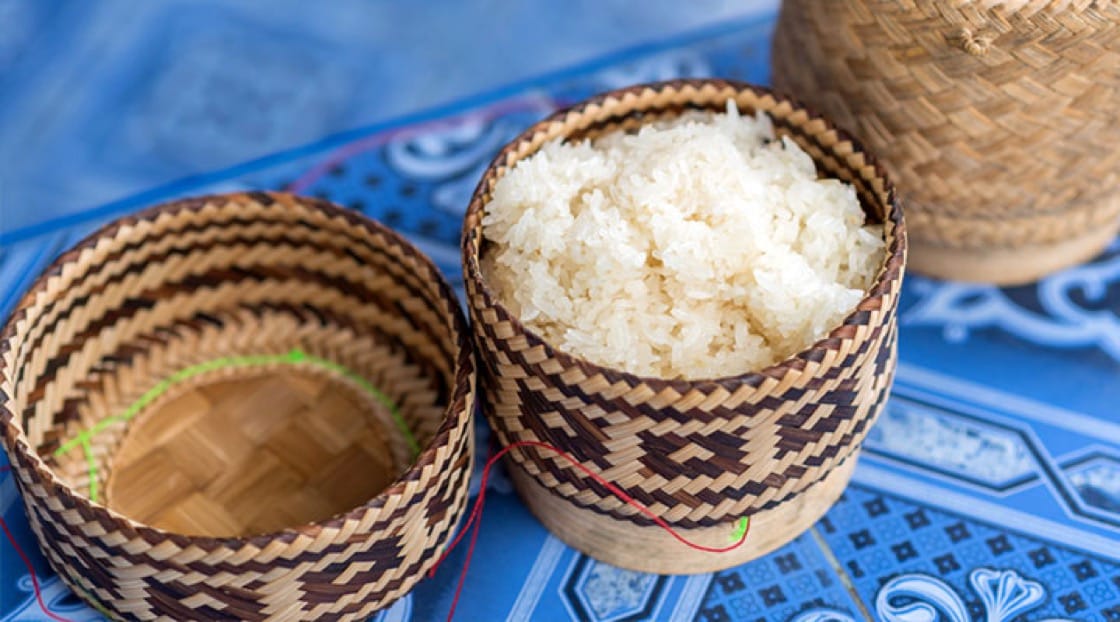 Often accented with bright colours in the north of Thailand, woven baskets keep the rice warm and fresh.

4. Wok (grata)
Brought to Thailand by Chinese immigrants in the 1800s, the wok is now considered an integral part of Thai cooking, ideal for both frying and deep-frying. 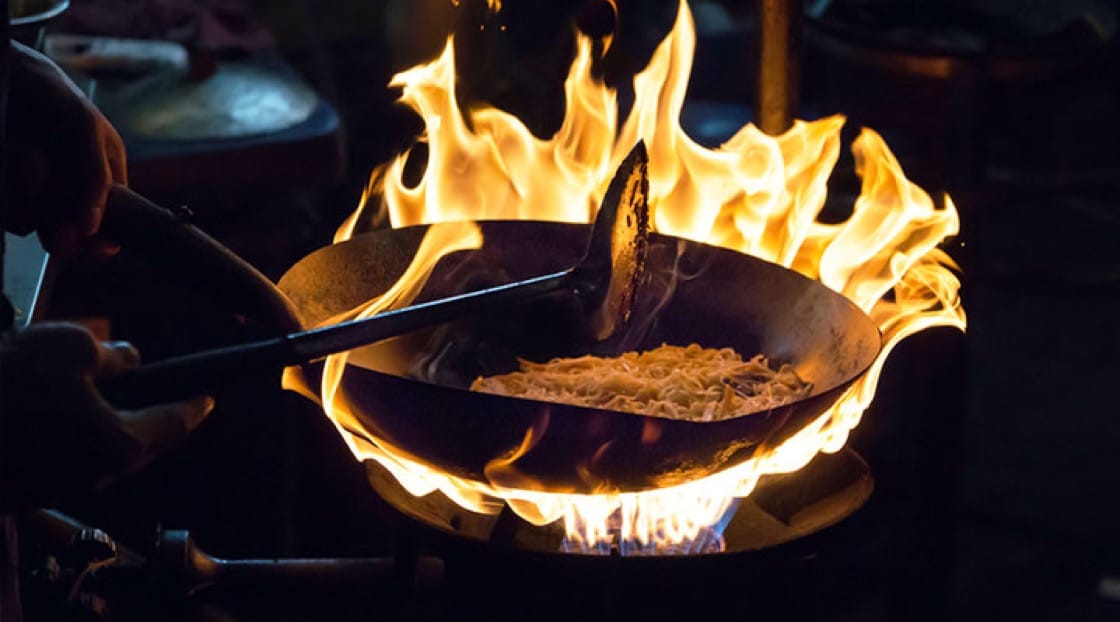 Woks are able to withstand high temperatures and can be used for deep frying, stir-frying, steaming and boiling. 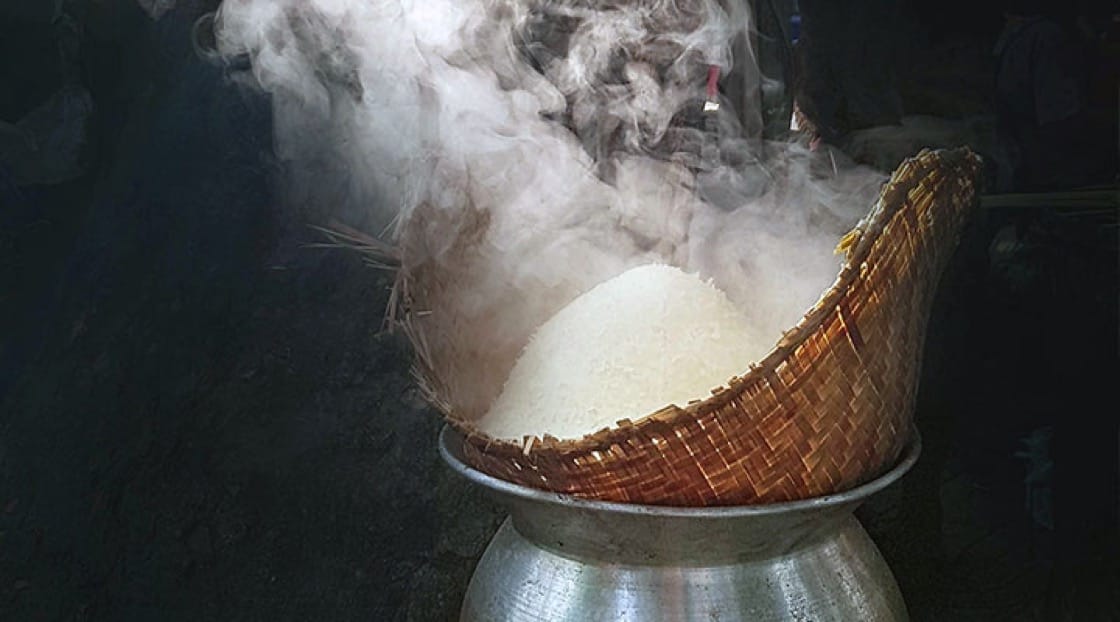 6. Cleaver (ee-to)
Because metal was typically reserved for weaponry in the old days, many traditional Thai kitchens made do with just one knife. Usually, that knife was a Chinese-style cleaver, perfect for everything from chopping herbs to cutting through bones. 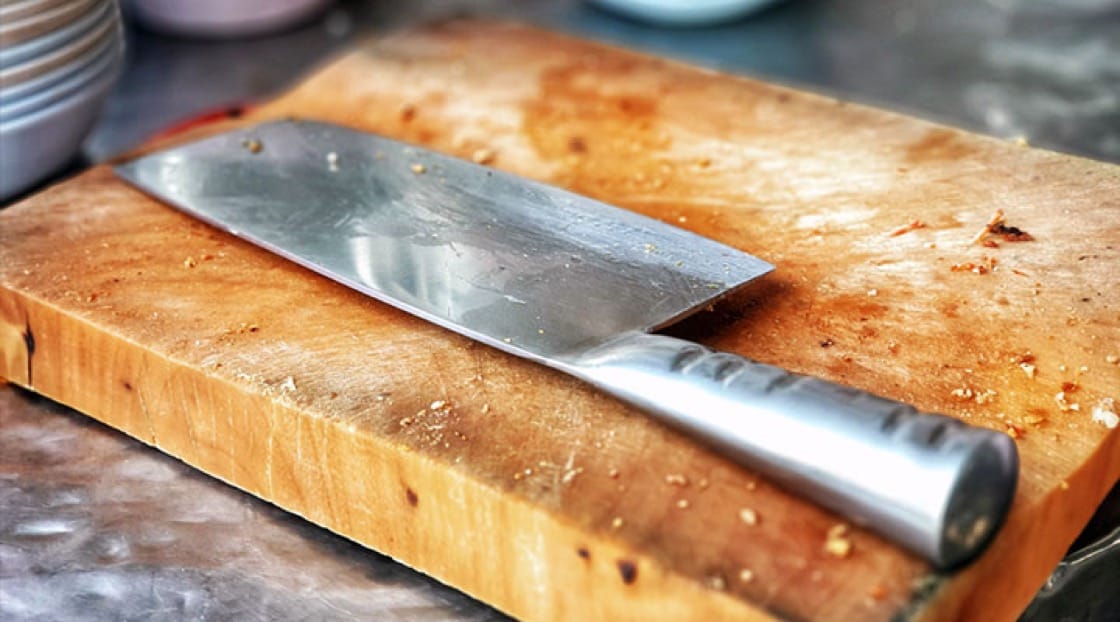 The Chinese-style cleaver is perfect for everything from chopping herbs to cutting through bones.

7. Chopping block (kieng)
Accompanying every cleaver was the chopping block, ideally made from tamarind wood, considered the sturdiest wood available. 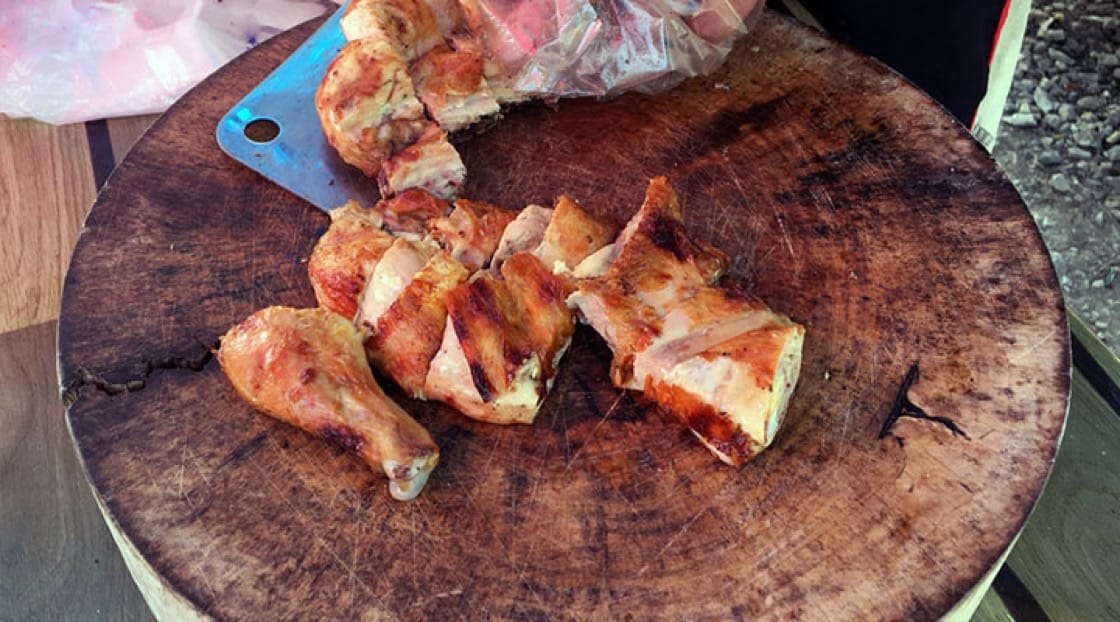 8. Steamer (maw neung)
The steamer was (and still is) one of the most used tools in the Thai kitchen, playing a part in everything from spicy salads to desserts. 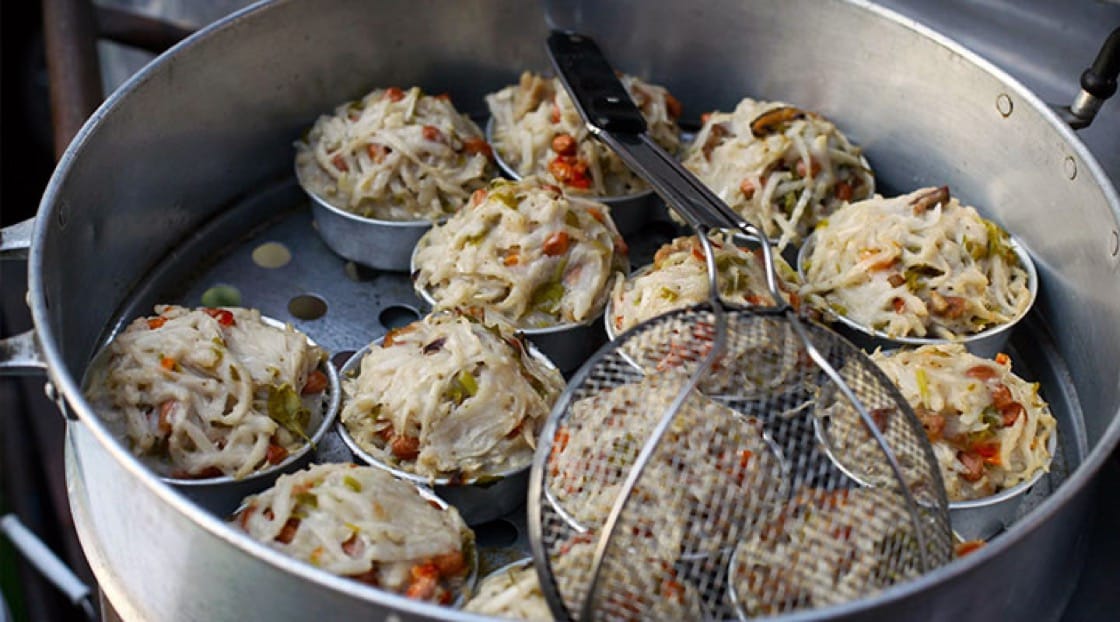 Thai snacks served in a steamer streetside in Chinatown Bangkok.

9. Brass pot for desserts (mor tong luang)
Brass (tong luang) once loomed large in the Thai kitchen. Shaped like a wok with handles on each side, these pots or bowls were used for the laborious work of making Thai desserts, which usually involved long periods of stirring over heat. Unlike the kratai, these pots are still used, and their production has actually increased over the years. 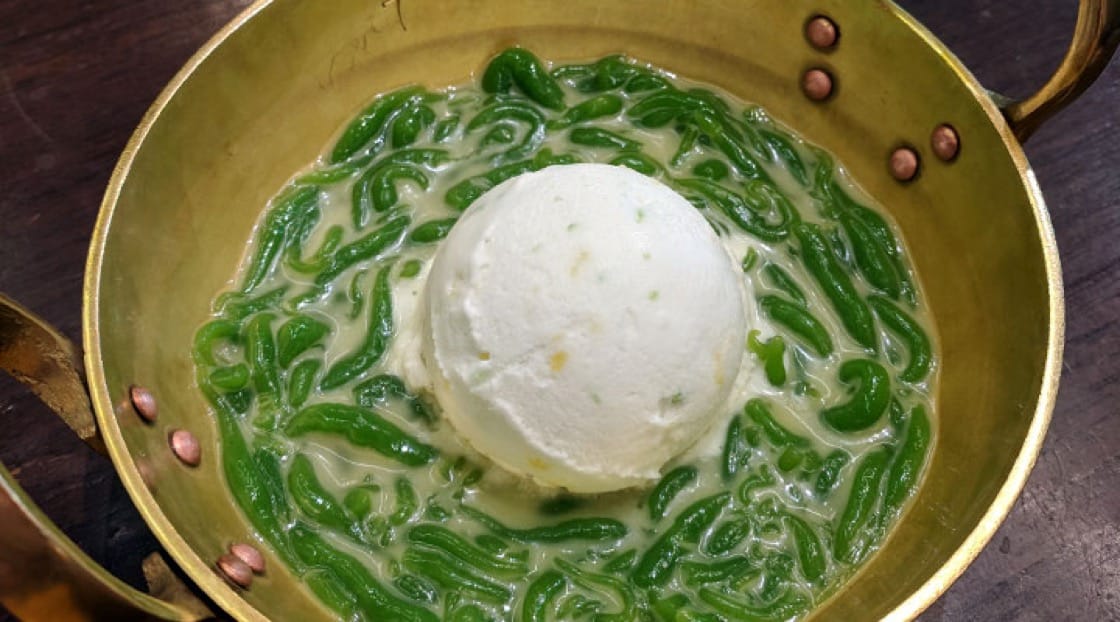 A modern rendition of lod chong served in a brass bowl.