“We toiled in the kitchens of cruel and capricious monarchs, sweated in the cellars of grand hotels, bounced from restaurant to restaurant. Those in our clan prepare pho in makeshift food stalls at night markets, peel chicken from the bone to roll in freshly fried tortillas in mercados, flip eggs behind lunch counters. Through guile and persistence and desperation, using the knowledge passed down to us by those who came before, we turn tough, unlovely bits of meat and scrap, produce and legume, into beloved national dishes. This thing of ours was always about transformation, about the strategic application of heat to make what was available somehow better."

- Anthony Bourdain, The Nasty Bits
It seems so natural, in the present moment, to think of a chef as a creator, a visionary. All one has to do is turn on the television to see a smiling figure in whites and toque artfully drizzling basil oil across an immaculate plate for evidence.

However, this was not always the case. For centuries, chefs were servants. They worked in the kitchens of kings and dukes. They were janissaries in the armies of the Ottoman Empire. And the credit and acclaim for culinary innovations by a lowly cook would go to their households and masters. This is the story of how we got from there to here. 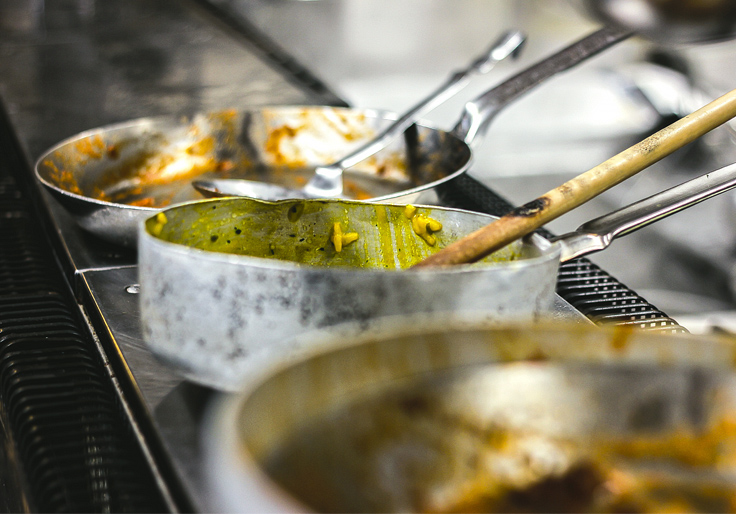 A caveat: this is, specifically, the story of how the role of the chef evolved in what can vaguely be called the “Western” culinary tradition, as ill-defined a term as that is. India, China, Japan, and Iran (to name just a few examples) can claim their own uniquely rich culinary traditions and classical cuisines. Here, we are discussing the modern notion of the individual chef as creator which arose simultaneously with the transition to modern economic systems in Europe.

So how did that transition occur? 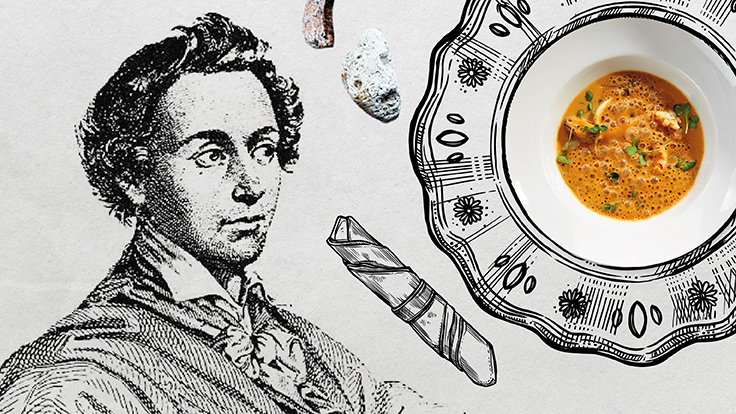 Marie-Antoine Carême, a French chef and an early practitioner and exponent of the elaborate style of cooking known as grande cuisine, the "high art" of French cooking. (© www.franceculture.fr / Shutterstock)

The story really starts in the wake of the French Revolution. It is no coincidence that one of Europe's first “celebrity chefs,” Marie-Antoine Carême, earned his fame through his service to the Prince of Talleyrand. A father of modern diplomacy, Talleyrand knew that diplomacy was a lot easier over a good dinner. Carême codified the mother sauces, helped usher in the concept of courses (rather than presenting every dish at once), and advocated a cooking style that showcased the ingredients themselves and not Medieval spice blends. Yet, he still worked for an individual aristocrat and did not offer his inventions to the public at large.

As the economy changed from the mercantilist to the capitalist mode of production, and the middle-class expanded, fewer and fewer chefs worked for wealthy private individuals, and more and more began opening up their own restaurants to serve a growing bourgeois demand. 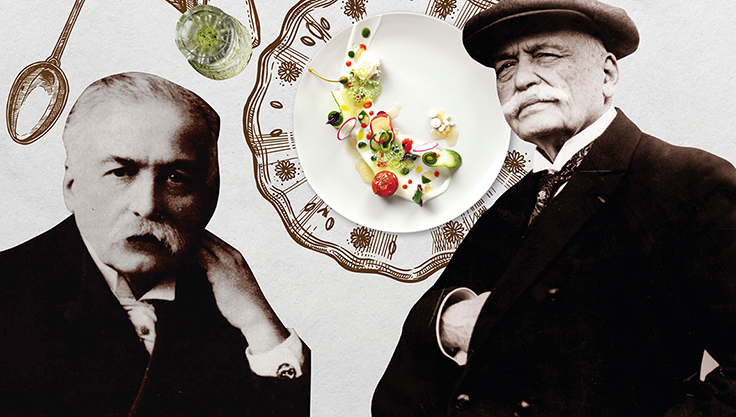 Into this world stepped Auguste Escoffier, the chef who helped the hotelier César Ritz build his reputation and who transformed the kitchens of the Savoy Hotel in London. This first of luxury hotels attracted the newly rich, bringing aristocrats out of their parlours and into the dining public as never before. Escoffier was one of the first chefs not to be regarded just as a master craftsman, but as a pioneer. His 1903 cookbook Le Guide Culinaire is still a common reference for culinary students, chefs, and talented amateurs looking to master French cuisine. It established Escoffier's recipes as a standard and confirmed French techniques as the way to cook in the Western world. He refined how people cook and eat, advocating canning tomatoes and cultivating mushrooms, as well as a la carte dining, the brigade system for kitchen staff, and (kidding you not) actually allowing women into European restaurants. After Escoffier, nothing was the same in French dining, and his disciples spread far and wide, carrying with them one of his core messages: “A cook is a man with a can opener, a chef is an artist.”

However, it was only a matter of time before Escoffier’s revolutionary methods that reached far and wide became outdated. By the 1960s, something new was needed, and as that decade saw its revolutions in music, cinema, and fashion, it saw a revolution in cuisine as well.

READ: Northern Thai Food And Nature: The Role Of Natural Materials Inside The Kitchen 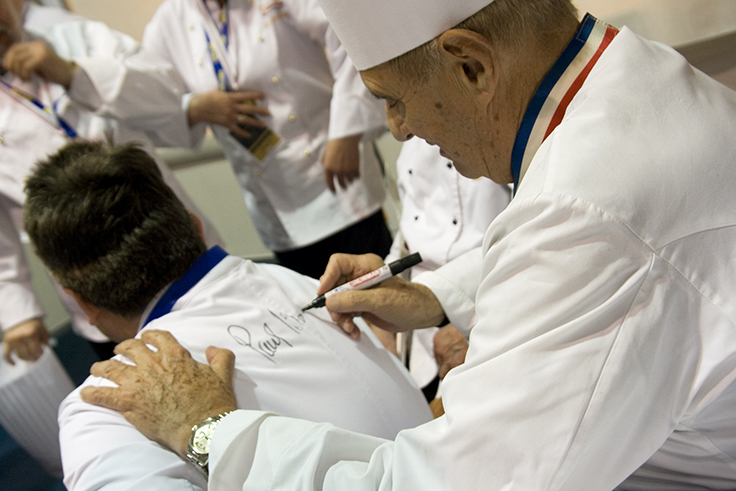 Paul Bocuse, one of the most prominent chefs associated with the nouvelle cuisine. (© Gaborturcsi / Shutterstock)

Enter two stubborn, iconoclastic food writers, Henri Gault and Christian Millau, determined to turn the world of French cuisine (which, largely thanks to Escoffier, had become the world's cuisine by this point) on its head. To mirror the nouvelle vague in French cinema and the nouveau roman in French literature at the time, they coined the term nouvelle cuisine to describe the cooking of Paul Bocuse and others. This new, or nouvelle, generation of chefs threw out many of the old “Escoffier” rules, and emphasised fresh, seasonal ingredients, a respect for regional traditions, and – most immediately obvious to the diner – modern, innovative presentations.

A quick look at some of these innovations also shows, for the first time in the Francocentric fine dining tradition, influences from around the world. Some photos of the classical nouvelle cuisine presentations suggest some influence from Japanese kaiseki dining. At first, this may have been subtle, but by the 1990s, nouvelle cuisine chefs like Joël Robuchon and Pierre Gagnaire were frequently discussing their Japanese inspirations. 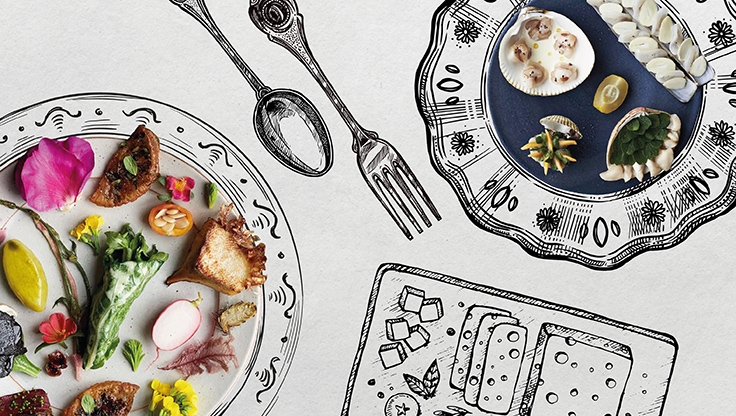 This new, international way of cooking found fertile soil to take seed far and wide. In France, Joël Robuchon used these techniques to honour classic working-class French bistro cuisine, and in Spain, it gave Juan Mari Arzak the opportunity to elevate the traditions of the Basque Country. Alain Passard dug deep into the terroir of Western France, and across the world in Hong Kong, Alvin Leung used the same inspirations to parse apart and deconstruct the classics of China.

Since then, a proliferation of schools and approaches can trace their DNA back to Escoffier and Carême. Modern Spanish chefs like Ferran Adrià at El Bulli have pressed the boundaries of what food is, bringing scientific and medical equipment into the kitchen in pursuit of new flavours and textures. Meanwhile, in the Nordic countries, chefs like Magnus Nilsson in Sweden and René Redzepi in Denmark have developed an intellectually rigorous style of cuisine that puts foraged wild ingredients and an almost bonsai-like presentation front and centre. And in multicultural, cosmopolitan New York, David Chang combines high- and low-culture, with classical French techniques running headlong into Chang's memories of growing up in a Korean immigrant home along with desserts inspired by McDonald's apple pie or by the taste of the milk from a bowl of cereal.

What ties all these chefs from such different backgrounds together is the fact that they took the simple question of “what to eat?” and answered with an ingenuity borne out of their own experiences and craft. 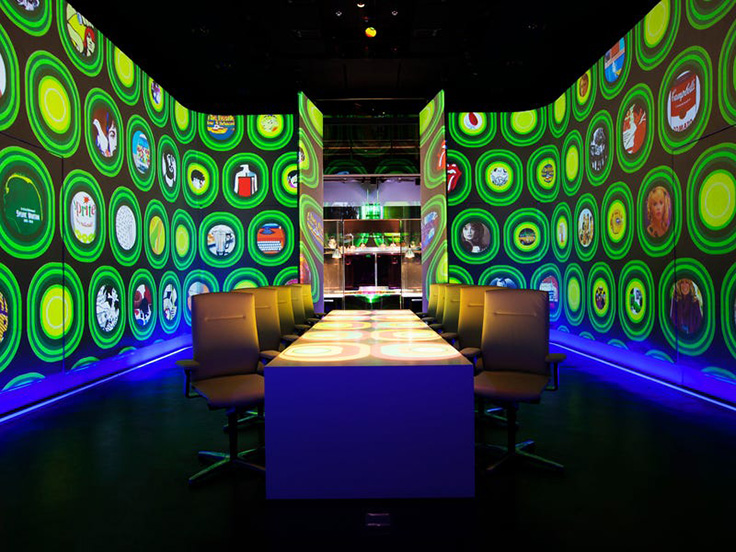 So, more than 200 years on, where has this voyage taken us, and where will it take us in the future?

“Sustainability” has regrettably become something of a buzzword. However, in a world in which many of the most popular fish species are disappearing towards extinction due to overexploitation and ocean acidification, in which arable land is becoming scarcer, and in which extreme weather events are becoming more and more likely to disrupt food supplies, it's a hard concept to forget. Around the world, chefs are taking note, turning the concept of sustainability into a source of creativity.

There is also the wealth of Asian traditions to consider. While the foodways of Asia have long developed along a different trajectory than those of the Western world, more and more chefs across the continent are proudly and effortlessly presenting their own traditions to the world. It is indicative that most of the recent territorial expansions of the MICHELIN Guide – Beijing, Shanghai, Guangzhou, Taipei, Seoul, Thailand, Singapore – have been in East Asia. It seems inevitable – especially given the rise of the middle class throughout the region – that thousands of years of Asian kitchen artistry is slowly becoming more and more known for global cuisine.

All of that being said, a crystal-ball prediction is impossible. What can be said is that, at the end of the day, what we eat, such a fundamental necessity for a living being, will rest with individuals armed with ingredients, utensils, and perhaps above all else, a vision.

Meet 6 Malaysians Who Lead MICHELIN-Starred Restaurants Around The World