Chef Vincent Thierry said that with a friendly smile when he didn’t hear his restaurant name – Chef’s Table – among the One MICHELIN Star list. In 2019, it received its first MICHELIN Star after only seven months of operation.

At the very back row in the Grand Ballroom where the MICHELIN Star Revelation Thailand 2021 took place, sitting calmly next to him was Guillaume Barray, Chef’s Table’s manager. He was soon presented with Thailand’s first-ever MICHELIN Guide Service Award, although he didn’t know it at the time.

It’s not that they didn’t know. Receiving an invitation to attend the Stars Revelation often means success. However, you are never really sure until your name is called, and the red plaque is placed in your hands.

Chef Thierry recalled a conversation with his team the day before. “I told them, ‘Guys, tomorrow I’ll go there, and there are a few possibilities. It’s possible that we lose the Star, maintain [the Star], or we gain more. If that’s the case, everybody’s happy.”

And everybody’s indeed very happy, because on the very next day, Thailand welcomed Chef’s Table to her Two MICHELIN Star league. 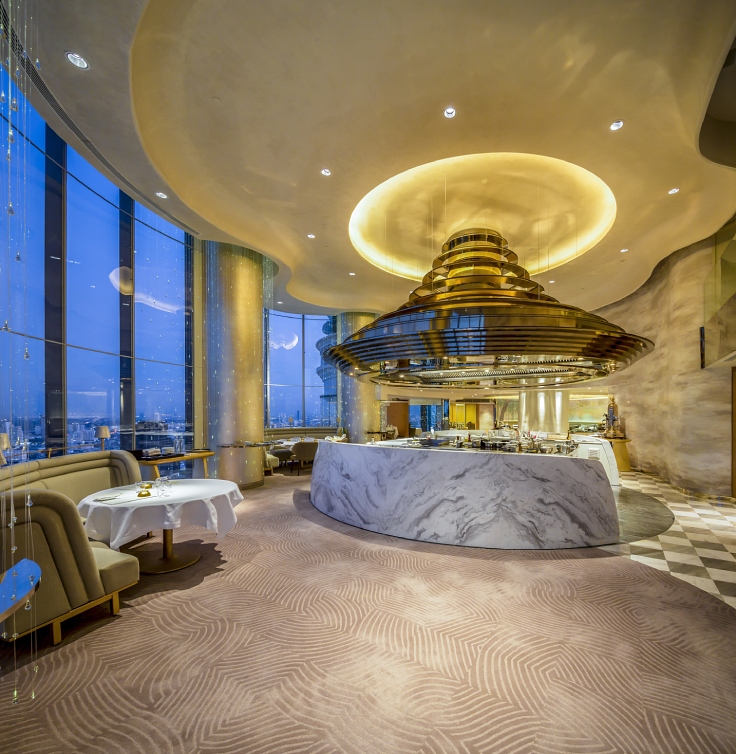 It’s all about the kitchen in the centre of the room – and the Molteni stove. (© Chef's Table)

Being promoted is definitely a joy, but this is not the first time for the French native. In 2005, Chef Thierry was picked to head prestigious French haute cuisine restaurant Caprice in Hong Kong, winning the highly coveted Three MICHELIN Stars. He continued there for four full years, then he decided to settle in Thailand.

Though he mentioned he never imagined going back to the world of fine dining when moving to Bangkok, it seems fated to be. Chef Thierry took on leadership of the kitchen team at Chef’s Table, a gorgeous dining destination on the 61st floor of The Dome at Lebua at State Tower.

Right off the stage at the 2021 Star Revelation and still holding the beautiful plaque adorned with Two MICHELIN Stars, the chef spared time for a short interview, which began with a classic question.

“How do I feel? I feel proud. I think it’s the same words that I said last year,” the chef smiled. “The MICHELIN Guide is one of the most highly trusted judges of what we are doing in fine dining. It’s the mark of quality. To be recognised by the MICHELIN Guide is, well, an honour. We always expect the best. When you get One MICHELIN Star, you want Two. When you get Two, of course you want Three Stars. I think it’s normal and natural. Doing sport, or any competition, you want to win.”

The French chef continued, “But you never know the value of what you’re doing, how you are going to be judged, how or when you are going to be recognised by the MICHELIN Guide or the others. What you do is you listen to your guests. This is the most important.”

“Today is MICHELIN day, but tomorrow, we go back on the track. We start again.” 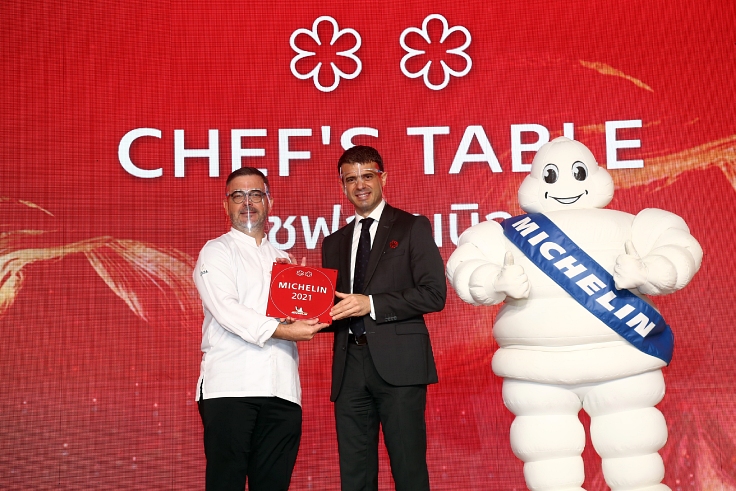 To Chef Thierry, winning is an achievement, but obviously not everything. His sincere response to the honour implies how his guests stay at the forefront in an industry that values hospitality and impressive experiences.

“Today is MICHELIN day, but tomorrow, we go back on the track. We start again. More customers will come in. We are going to be busier. Their expectation will be higher as now they are coming to a Two MICHELIN Star restaurant,” he smiled.

“Nothing’s wrong with the Guide,” the chef quickly added.

“It’s just that to me, customers are more important. It’s been over thirty years that I worked in the kitchen. The best thing that can happen is when we see customers coming back. So, from tomorrow onwards, we are going to be different, definitely more focused on our guests.”

“In my mind it’s the same as yesterday. We continue doing our job,” he elaborated. “I mean MICHELIN never gave us ‘recipes’ of things like: now you have Two Stars, what to do to get three. What you can do is just keep going and trying to do it even better.

“There must be something you can always do to improve,” he insisted.

Moving from One to Two Stars, he shared with us if he did anything differently compared to the first year.

“No. The thing is that you make a difference every day. At this level, you have to always try to improve. This is the only way you can grow. If you don’t have the discipline and the mentality to do it better, you cannot go up,” he said matter-of-factly.

READ: Chef’s Table At Lebua Makes Its Debut In the MICHELIN Guide Thailand 2020 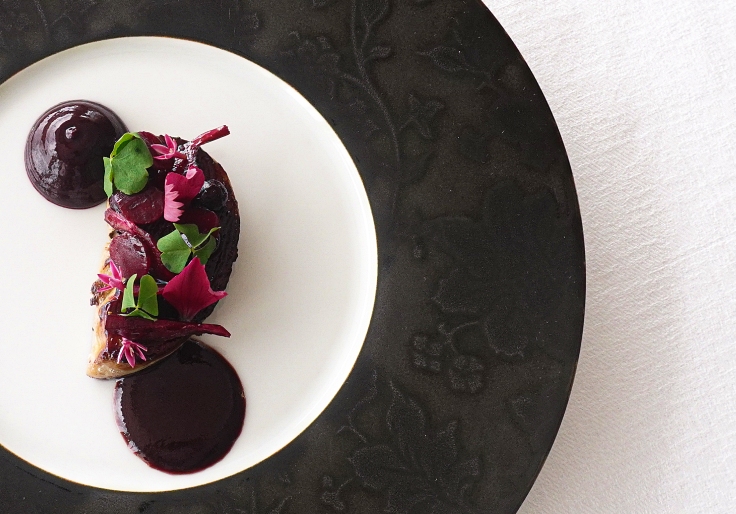 Born and raised in France’s lush Loire Valley, known for its beautiful produce, the future chef grew up on a family farm eating simple, homemade meals made from scratch by his mother and grandmother.

Young Vincent watched his grandmama clean rabbit and chicken and make her own sausage, ham, and pâté. The childhood experience became part of his cooking style today, as he still makes his own bread and butter using quality milk and cream from Khao Yai.

The tiger prawn dish he cooked later that night at the MICHELIN Star Revelation 2021 Gala Dinner was titled “The Celebration of Thai Land”, as it combined exquisite, 100% locally sourced ingredients from the sea and the earth. The dish was served with, et voilà, house-made brioche.

Chef Thierry described his cooking philosophy as very simple and highly ingredient focused. Almost all items used at Chef’s Table are house-made. “Definitely, we try. Also, we try to source the ingredients from the best and proper local suppliers, that’s important. I think this is also very difficult to do, to have high quality ingredients. Compared to Hong Kong, to import things is a nightmare in Thailand. I mean the whole procedure. It’s quite challenging,” he grinned.

It would seem he was seeking a challenge when deciding to move to Thailand’s capital. After eight highly successful years in Hong Kong, he chose to leave, despite the fact that business was thriving, and his family was happy.

“I never imagined getting Three MICHELIN Stars and holding it for four years in Hong Kong. Then I decided to move to Bangkok. You don’t give the Stars back because they belong to the restaurant on top of me. It was not for doing more fine dining. For that, I could stay in Hong Kong.

“At that time, I wanted to do a different cuisine. I never expected to come back to fine dining. I can tell you I never imagined one day I’ll get back to this and receive Two Stars all over again,” he noted.

Happy to see his accomplishment, we said, “But you made it today.”

“Well, WE made it,” the Frenchman immediately responded. “We are a team. There are quite many things behind all this. A lot of people, a lot of hard work and training, working with new team members, and, of course, new recipes.”

“I never imagined one day I’ll get back to this and receive Two Stars all over again.” 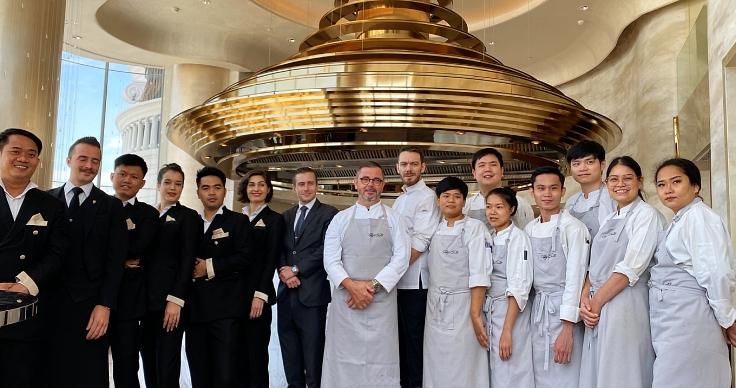 Chef Thierry reached for his phone to show us a picture of his team, all smiling brightly in the champagne-gold, spaceship-like kitchen. “Behind the plate, it takes many people. There's a lot of involvement behind the scene. The maid. The dishwasher guys. I’m on top of that, on creativity, making discipline. I’m the one who’s managing and bringing people this way.

“So today is important for all of us, especially for me. As a Frenchman, you are used to the MICHELIN Guide. I have always known MICHELIN Starred restaurants since I started working. We always had conversations about MICHELIN,” he recalled.

“However, for the young people I have around me, what we received today is going to show them that if you push yourselves and work hard enough, you can be recognised.”

As Vincent Thierry previously said, tomorrow he’s back to the kitchen and the work begins again.

“It’s about consistency. You always try to make things better and keep it that way. Day after day.” 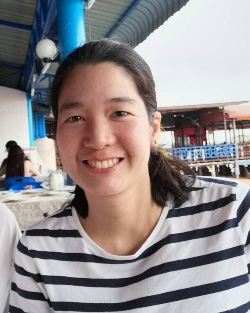 After finishing a degree in Culinary Arts in San Francisco, USA, Sue trained under several proficient sushi chefs and went on to work as their junior. She’s a museumgoer, local markets frequenter, and sushi lover. Sue completed her MA in Anthropology of Food from SOAS, University of London. She also has a soft spot for two things: beautiful hardcover books and kitchen people. On most Sundays you’ll find her at a tennis court.

“Do your best every day. Learn how to be a better chef every day. Make your guests happy. These are my motivations as a chef.”

Have You Met Uthit Songtho, This Year's Service Award Winner In Thailand?

Talking Thai-style service with the winner of the 2023 MICHELIN Thailand Service Award.

SAVE THE DATE: The MICHELIN Guide Thailand Star Revelation 2023 press conference and gala dinner event will take place on 24 November 2022. A magnificent five-course dinner will be presented, celebrating the diversity of the local gastronomy scene while paying tribute to local Thai ingredients.