Elliott Ferguson is the President and CEO of Destination DC, the District’s leading tourism agency. With thirty-plus years in the hospitality industry, Ferguson has a deep understanding of how issues like financial equity have been barriers to achieving real, representative diversity in business ownership. In a recent interview, he explains some of the systemic barriers Black people in particular have to deal with along with the power of mentorship and being a force for change.

Do you feel that business ownership in DC is as diverse as the city itself?

When I moved to DC nearly 19 years ago, DC was known as 'Chocolate City.' DC has remained a Black community. The Black population lives in specific areas of Washington and in those areas, you will find more restaurants that cater towards the Black community. You don't see that diversity as much throughout the city as a whole. That's indicative of a lot of American cities. The racial divide is associated with Jim Crow laws and segregation. You see populations segmented by race and therefore more businesses in those neighborhoods are owned by Black people catering to those communities.

You're starting to see a change, but it ebbs and flows. In DC, the Black community is not just represented by African Americans, but by Black people that came from Africa, the Caribbean, and other parts of the world. So you do see diversity within Black-owned restaurants.

The barriers are tied to opportunities to get loans for new businesses and owning real estate. As the US has been coming to grips with the racial divide, this lack of opportunity has become more of a topic of conversation. Wells Fargo recently committed resources to Black communities as a way of taking responsibility for things they've done in the past that have, unfortunately, hurt those communities.

And it's been specific to the Black community. Redlining [occurred when] districts were drawn [by Congress] and financial opportunities were not given to those districts, which was really referencing the Black community. This hampered economic development and the adverse effect is food deserts and lack of growth and opportunity within these communities. Some of that is changing as gentrification is happening. In a city like Washington, the areas that offer the most affordability are primarily Black communities, so that is going to change the dynamics of the community. But it's not necessarily beneficial to the communities that have been there for decades.


Are there barriers for Black people hoping to own a business in the hospitality industry in particular?

Sometimes it's perception and that is tied to systemic bias and systemic racism. In some cases, the perception is you can't possibly be an amazing chef if you're Black. Some of those barriers are slowly being torn down thanks to MICHELIN and other opportunities, and to television shows that allow us to celebrate the attributes of Black chefs. But the economics are still difficult for these chefs to get the funding to open restaurants. I'm optimistic that now, more than ever, we have a chance to see some changes.


Are there other agents in the industry who need to be involved in breaking down the barriers?

Aside from lack of funding opportunities, the real estate developers. Without them you'll never be able to realize a dream of being a chef on your own. The thing I will say about DC is you've got so much diversity, but you also have a very intellectual community as well. We want to learn from each other's differences and appreciate each other's likenesses. I think that's what is so unique that perhaps does not exist in other major cities. So, landlords are changing their mentality in terms of doing business with Black people, which leads to the flexibility of not necessarily doing something in Chinatown or near the White House — where rent will be significantly higher. 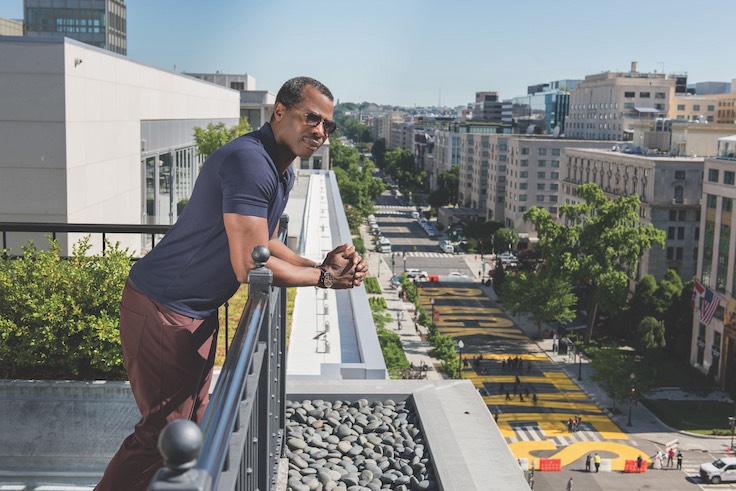 From your own experiences, can you pinpoint some moments that were pivotal in helping you progress your career?

I was very fortunate coming into this industry. There was a gentleman at my first job who helped me understand what this industry was all about. I didn't understand the dynamics and the fact that there were opportunities within [the tourism] industry. For six months, which would never happen today, he worked to convince me that this was a good opportunity.

I've had the fortune of learning a lot of positive things from people. I joke that sometimes you learn what to do, but equally, you learn what not to do. I've had those opportunities, by being a victim of some degree of racism, that allowed me to be the leader that I am today.

The most important individuals that helped guide me through the most difficult times professionally were not in the industry. They were people in my family that gave me feedback. My minister who would give me spiritual guidance over things happening to me that could be perceived as racist. I always say it's important that you have people that work within the industry, but equally, you need to have a nucleus of people you can count on to help guide you through.

I was born on the West Coast, my dad was from the Caribbean, and for the most part, we had a pretty decent lifestyle. But my grandparents were married for 20 years before they had children and to hear these stories of the racism they had to deal with in the south, especially my grandmother, was just absolutely shocking to me. These stories helped mold me into a person that wanted to do better and wanted to make them proud. I wanted to be able to look back and say that what we're doing now, what I'm doing in the industry, will perhaps help others to get involved.

We have a foundation called the American Experience Foundation, which was created right after 9/11. When I became CEO, I wanted the foundation to give back to the youth and help them understand that there are opportunities within this industry. There's nothing wrong with starting as a cook. Most people start at that level and there are great opportunities as you move within the industry. I want to be able to say that we were able to give back more than just bringing tourists to the city. We will give back to the local community and the youth, especially minorities, within this community.

Visit www.washington.org to discover the monuments, memorials, museums and, of course, the world-class dining scene, that make Washington DC one of America’s most important and exciting cities to explore.