With diners becoming more health-conscious and more mindful towards environmental issues, it comes as no surprise that vegetarianism has been an increasing global trend.

These days, MICHELIN-starred restaurants in Singapore have also shifted towards a more produce-driven direction, highlighting the ingredients’ freshness and flavours, while thoughtfully curating more plant-forward options for diners who request it.

Shining the spotlight on a bounty of artisanal, heirloom, and organic fruits and vegetables, these seven MICHELIN-starred restaurants are challenging creative boundaries and culinary norms by elevating the humble vegetable and turning it into the star of their tasting menus. 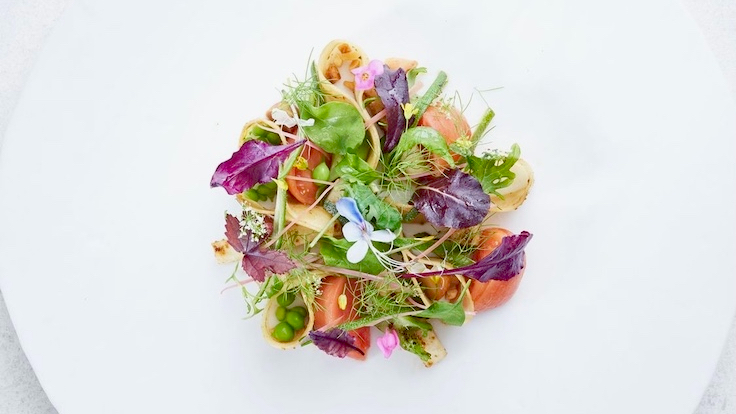 Three-MICHELIN-starred Odette is a reflection of chef Julien Royer’s lifelong respect for seasonality and terroir, evident in dishes such as the Promenade à Singapour. (Photo by Odette)

Recently awarded three MICHELIN Stars, the highest accolade in the MICHELIN Guide, Odette is an ode to chef Julien Royer’s grandmother, who, according to him, “showed me how the most remarkable dishes can come from the purest ingredients.” The modern French restaurant also reflects Royer’s lifelong respect for seasonality and terroir by sourcing produce from boutique suppliers and artisans all around the world. At Odette, Royer takes pride in treating the ingredients with utmost care to bring out their purest flavours. Some of the restaurant's vegetarian highlights of the season are the Promenade à Singapour, which features a selection of over 20 vegetables including shio kombu, spring leaves, green oxalis, and tarragon flower, all foraged and farmed right in Singapore, and Fleurs de Courgette Farcies 'Provençale', which is a dish of zucchini flowers filled with ricotta, confit bell pepper, and fragrant Menton lemon.

What Our MICHELIN Inspectors Say About Odette: Chef Julien Royer earned unanimous acclaim with Odette, a fine dining concept that emphasises a comprehensive experience. The interior in muted pink and grey makes a lovely prelude to a graceful meal that unfolds with culinary and artistic vision. Unique combinations and exquisite plating are matched by precise balance and contrasting flavours with occasional Japanese touches. 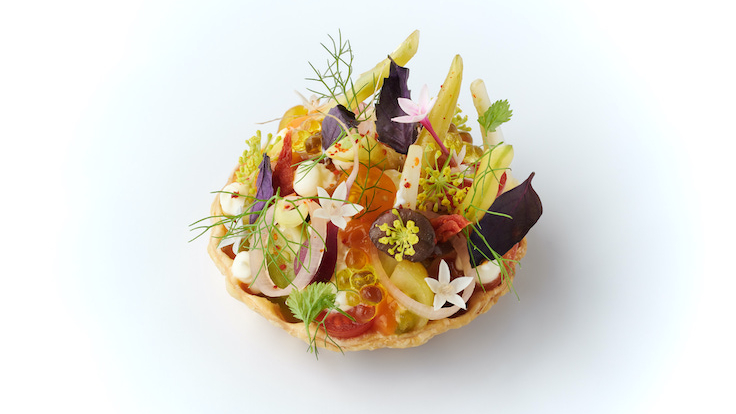 The newly awarded two-MICHELIN-starred restaurant by British chef Kirk Westaway pays homage to natural flavours with modern touches. Westaway, who personally prefers to consume vegetables over meats, draws inspiration from his childhood in Devon, where picking vegetables with his mother and sisters in their family farm remains one of his fondest memories. At JAAN by Kirk Westaway, vegetarian menus are offered in line with Westaway's "Reinventing British" culinary philosophy and comprise of dishes starring humble farmers' market hauls such as Cucumber Meringue, Sweet Summer Tomato with Basil and Olive, and Violin Courgette with Goat's Curd and Lemon.

What Our MICHELIN Inspectors Say About JAAN By Kirk Westaway: Embodying the quintessence of fine dining, this romantic restaurant has it all – food, service, ambiance and spectacular views. Chef Westaway makes good use of top-notch British produce and inspirations to turn out modern culinary creations that never fail to impress. 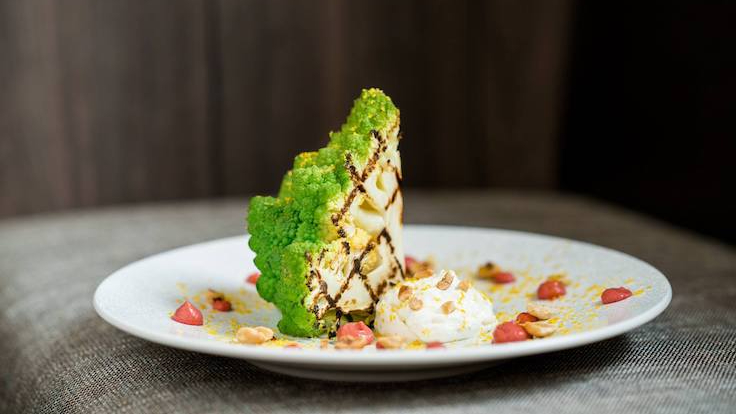 Braci means “embers” in Italian, and its cuisine revolves around the use of wood and fire in Italian cooking. (Photo by Braci)

This one-MICHELIN-starred restaurant’s namesake alludes to “embers” in Italian, and Braci’s cuisine fittingly revolves around the use of wood and fire in cooking, specifically through the Josper oven and the shichirin grill. At Braci, one can experience vegetable dishes prepared in the style of meat such as the Josper-grilled romanesco, which is accompanied by artisan-made Pugliese burrata mousse, toasted IGP hazelnuts from Piedmont, and a pesto that is made giardiniera-style (using a medley of pickled Italian vegetables).

What Our MICHELIN Inspectors Say About Braci: With his degustation menu, Beppe De Vito takes diners on a culinary journey across Italy and Asia with quality produce from around the world. Without a doubt, the centrepiece of the open kitchen is the Josper Grill, where most dishes are prepared, including the bread that’s made in Italy but baked in-house. The simply furnished room affords gorgeous river views. So does the charming rooftop terrace, best for a pre- or post-dinner drink. 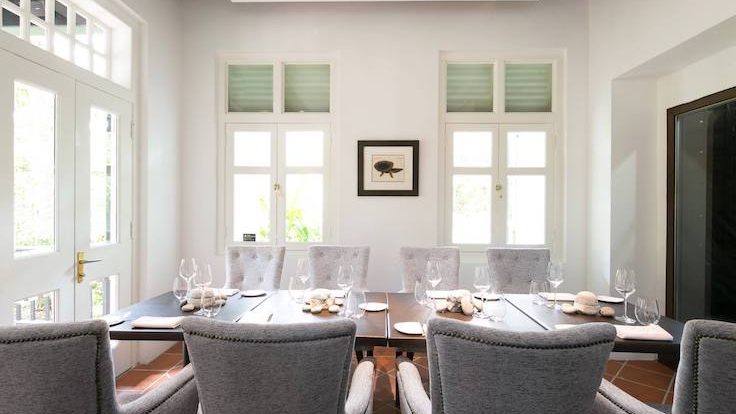 Corner House at the Singapore Botanic Gardens is committed to sustainable gastronomy practices through its waste-minimising initiatives. (Photo by Corner House)

One-MICHELIN-starred Corner House at the Singapore Botanic Gardens features French-Asian fare with a commitment to sustainable gastronomy through its waste-minimising initiatives. Developed by chef David Thien, the omakase-style menus adapt according to the seasons and availability of produce. At Corner House, a meat-free experience is offered with combinations such as truffled carrots with pickled shallots and watercress. Each plate is accompanied by a card that talks about Thien's personal stories that have inspired the dish's components. Thien confesses he was not always a champion of vegetables, but became a convert thanks to a dish called White Page Syndrome created by his sous chef, wherein root crops such as carrots, turnips, and radishes are prepared in varying textures.

What Our MICHELIN Inspectors Say About Corner House: Set in a colonial house circa 1910 on the grounds of the Botanic Gardens, this multi-course menu reflects the chef’s roots and global culinary experiences. Before the wittily named courses are served, such as ‘an ugly brother’ or ‘tea gastronomy’, diners are presented with a card that explains the inspirations behind each creation. There are three rooms to choose from, and Whispering Corner overlooking the patio is your best bet for a romantic dinner. 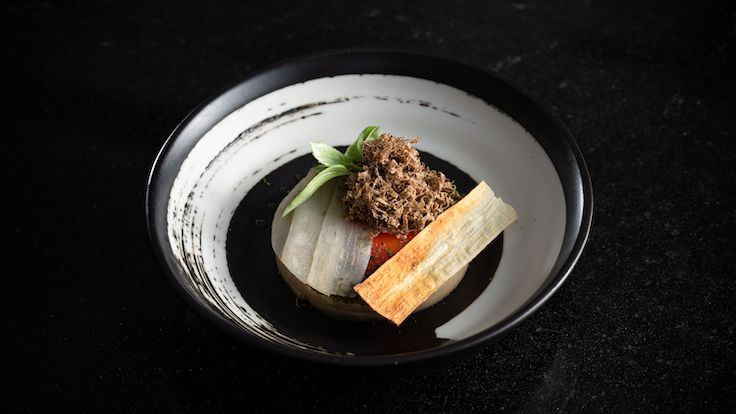 Restaurant JAG along Duxton Road features a “No Menu” approach, with vegetables of the season taking centerstage. (Photo by JAG)

Boasting “an experience as unique as the diner themselves”, one-MICHELIN-starred Restaurant JAG along Duxton Road features a “No Menu” approach, with vegetables of the season taking centerstage. Here, chef Jeremy Gillon takes pride in using seasonal produce and foraged herbs from Savoie, France, with help from his personal “herb whisperer.” His produce-forward culinary philosophy champions vegetables and includes interesting choices such as celtuce juiced with apple and mint oil, carrots that are brewed into tea, and Japanese tonburi, or edible cypress tree seeds also known as the "caviar of the fields", which is paired with romanesco.

What Our Inspectors Say About JAG: In his cooking, Chef Jeremy Gillon uses dried herbs from the Savoie region of the French Alps, where he spent most of his career. But unlike typical Savoyard food that is heavy and greasy, his preparations are light in flavours, strong in creative flair. Sip herby cocktails and well selected wines at the lounge area on the upper floor, before embarking on an Alps-inspired culinary adventure in the dining room on the ground floor. 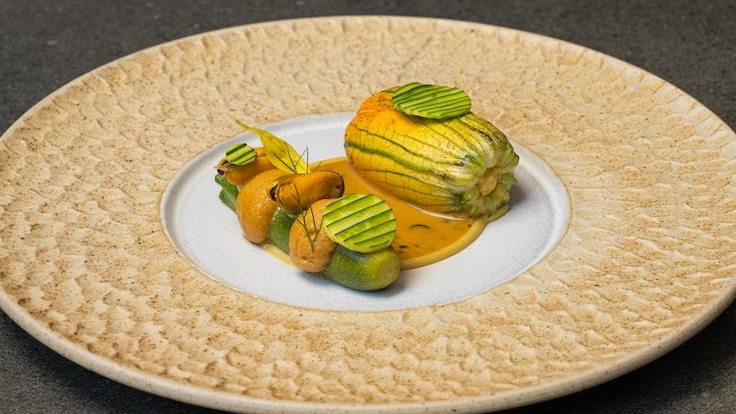 At Sommer, menus are designed according to the seasons, with vegetables such as zucchini flowers as part of the entrées. (Photo by Sommer)

Newly minted one-MICHELIN-starred Sommer at Marina Boulevard offers contemporary European cuisine that’s ingredient-driven with produce flown in from Japan. At Sommer, 28-year-old chef Lewis Barker designs menus according to the seasons. In its vegetarian offerings, the foundation of the menu remains the same, but with minor swaps, such as the use of pearl onion stuffing and zucchini vichyssoise in place of sea urchin and mussel mousse in a dish that stars zucchini flower.

RELATED: The First Day We Got Our Stars: Lewis Barker of Sommer 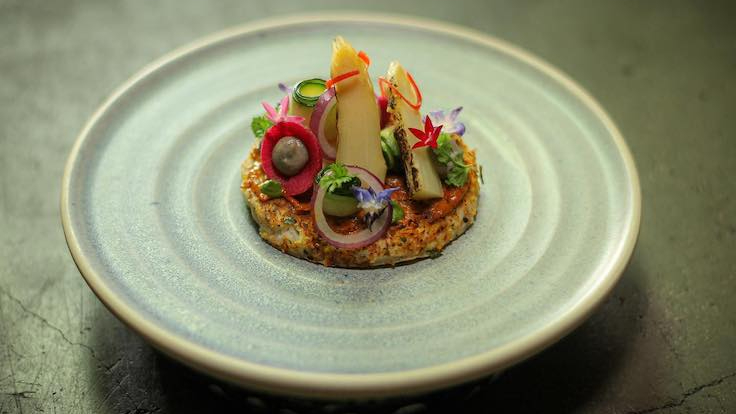 At Thevar, a Vegetarian Chef’s Menu is available for diners who prefer a more plant-forward experience. (Photo by Thevar)

Chef Mano Thevar offers Indian cuisine with a contemporary twist at Thevar. With vegetables making up a huge part of Indian cuisine, the newly awarded MICHELIN restaurant along Keong Saik Road offers a Vegetarian Chef’s Menu for diners who prefer a more plant-forward experience. In this menu, flavours remain classic while vegetables are reimagined with the use of trending culinary techniques such as dehydration and fermentation in dishes such as the Pani Puri made with dehydrated carrots and are bursting with fermented buttermilk, Tandoori Celeriac with Wild Asparagus and Cashew Salan, and Poriyal Mille-feuille served with Sambar.

What Our MICHELIN Inspectors Say About Thevar: Chef Mano Thevar serves a creative multi-course menu rooted in Indian traditions and crafted with European techniques. Signature dishes maintain a fine balance with mindful touches. Amuse-bouches and snacks between courses are especially fun and a vegetarian version of the menu is also available. The bustling and lively vibe makes for a great experience.