Step into any restaurant kitchen and you are likely to find a notice board full of reminders: duty rosters, supplier schedules, daily menus and group reservations. But aside from these, you might be surprised to find slogans and motivational quotes tucked among the sheets of paper or taking pride of place in the centre of the board. Often placed there by the head chef who leads the kitchen team, these pearls of wisdom reflect the kitchen culture and boost morale during busy seasons. Three top chefs of MICHELIN star restaurants in Singapore share their kitchen rules and motivational practices that set the tone for success. 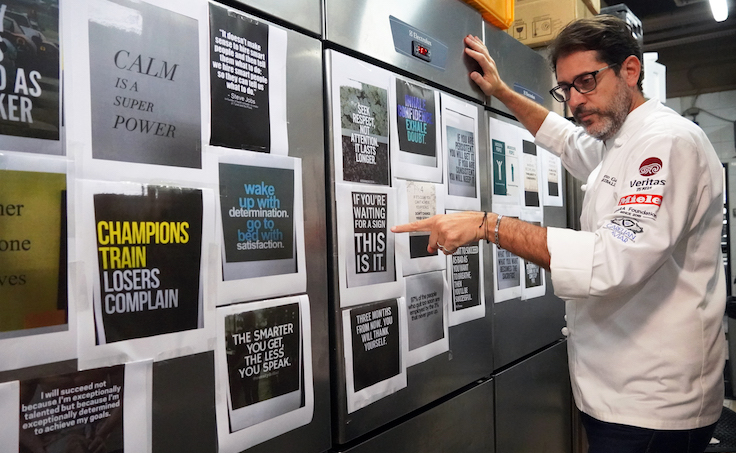 While our fridges at home may feature a mish mash of magnets and post-it notes, the sleek stainless-steel refrigerators that line a wall in the kitchen of one MICHELIN star Garibaldi have become a gallery for chef Roberto Galetti’s many motivational posters. He shares that he began putting up these quotes in the restaurant kitchen and in his office in 2011 after a business setback. “I was in need of motivation, searching for a push and I realised this was having a positive effect on me,” he says, adding that as his attitude began to shift, he saw a positive impact on his kitchen team.

Galetti recalls an episode in 2015 when the restaurant was struggling and morale was low. “We realised we had only reached the breakeven point, not having earned a single dollar in 9 months of working. Therefore, I had to do something and I found these two quotes that said: “Three months from now, you will thank yourself” and “May the next few months be a period of magnificent transformation”. Using these motivational statements, the chef rallied the team towards the same goal, encouraging each member to take the future of the restaurant into their own hands. “I couldn’t believe what happened, it was like a supercar that was driving 50km per hour, stuck in second gear and suddenly, it was able to engage in third, fourth and fifth gear. We managed to reach our budget for the year in the next three months and achieved the MICHELIN star in 2017.” 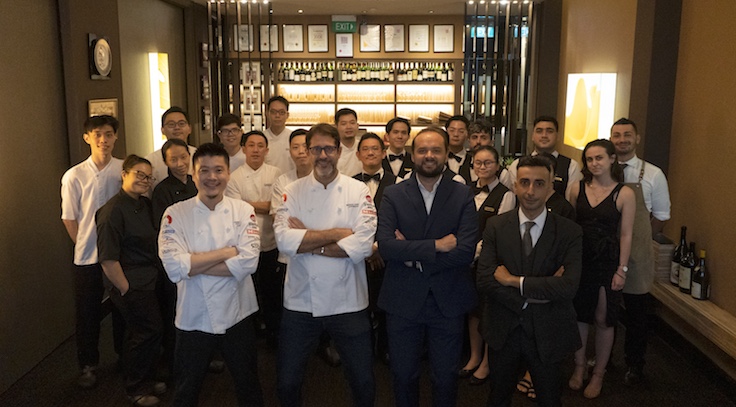 The chef attributes the strength of his team which has remained unchanged today to the principles pasted on the kitchen walls. “I want every single person that works with me to succeed and to be recognised as a good person. By doing this, I also hope to achieve an atmosphere in my kitchen where people are happy to come to work because, when the staff is happy, the environment is happy, the customer is happy and then everything works smoothly. Sometimes I do not need to talk, I can just point to one of the quotes and the guys understand what I want to say.” 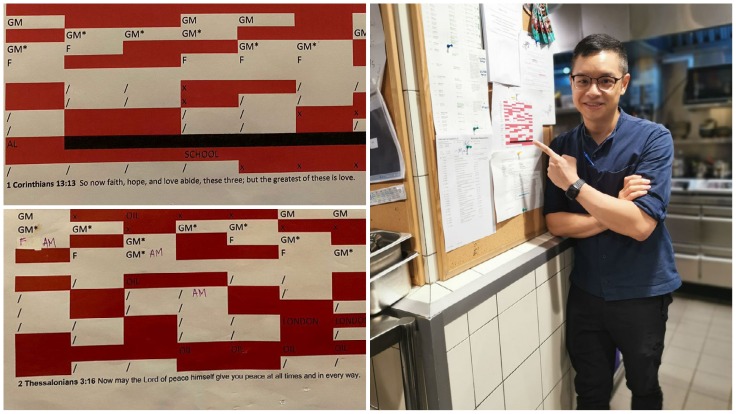 Encouraging verses from the Bible footnote the restaurant roster in Candlenut (Photo: Candlenut)

When the staff at MICHELIN-star Peranakan restaurant Candlenut check their schedules for the week on the roster, they don’t just see their names and duties—on the bottom, they also get an encouragement in the form of a Bible verse picked out by head chef and founder Malcolm Lee.

“Now may the Lord of peace himself give you peace at all times and in every way (2 Thessalonians 3:16)”, reads a quote from the first week of June, while the festive season of December extols the importance of love. “So now faith, hope and love abide, these three; but the greatest of these is love (1 Corinthians 13:13).”

“What I pick depends on what I read in my daily bread that morning,” shares Lee, a Christian who starts his day by doing devotions. “Whatever I feel that could give a boost of encouragement to the team during different seasons.” This includes motivational verses when he senses that the mood is low in the kitchen, inspiration when the team is facing certain difficulties and once, even words of comfort when a team member lost a loved one.

One of the restaurant’s core values, the chef shares, is family. “Here we support and encourage each other. We respect one another as though we are a real family. Whether it’s a work matter or personal, care and concern should always be shown.”

Having struggled with balancing work and life himself and overcoming a bout of depression, Lee is empathetic to the challenges of working in the F&B industry, seeing himself as not just a boss to his team, but a mentor and family member. “Working long hours can cause a lot of stress leads easily to arguments and squabbles. I leave these motivational Bible verses on the rosters as a reminder, so that they can be guided in the right direction, back on track.” 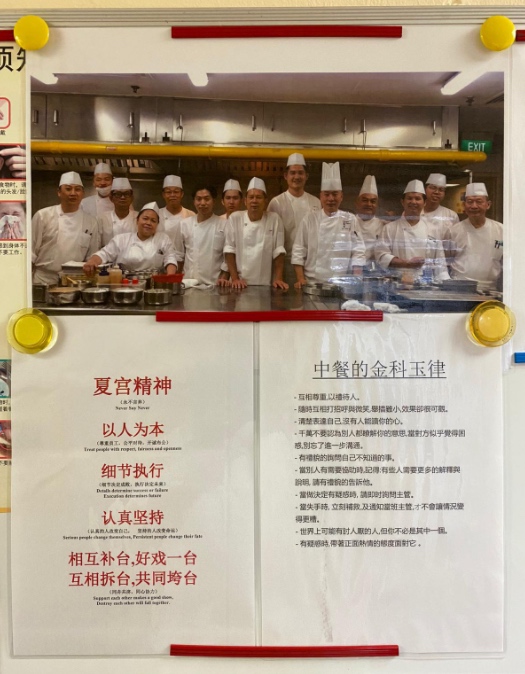 The “spirit” of Summer Palace takes pride of place on the kitchen notice board, under a picture of the MICHELIN-starred Chinese restaurant’s team, next to a list of golden rules. Written in Chinese rhythm and rhyme, the slogan expounds on the importance of excellence, perseverance, mutual respect and teamwork:

"Put people first,
Be meticulous in execution,
Be sincere and persistent.
Work together and put on a good show,
Work against each other and fail together."

“I developed this more than 10 years ago, in my early days at Summer Palace,” says executive chef Liu Ching Hai. “We all know the kitchen can be an extremely challenging working environment – fast paced and constantly amid high temperatures. Add a little bit of pressure and inevitably, friction and disagreements are bound to happen. I’ve seen it happen and just like hotels have brand pillars that they hold on and adhere to, I developed this slogan as a reminder for the kitchen team to stick it out and let the little things go. To also never forget where they all started – right at the beginning. Humility in the kitchen is a vital trait too.”

Communication and transparency are cornerstones in Liu’s kitchen as well. The restaurant’s golden rules remind staff never to assume that the other party has understood what was said and to always communicate well and clearly; to be quick to admit it when mistakes are made so corrective action can be taken, and most importantly to treat each other with respect with mutual support.

“It’s important to me because my previous mentors did this for me and I know the profound effect it can have in the long term,” explains Liu. “Every day’s work is full of challenges and hardships and without a guiding light, we can take our eye off the prize. I want my chefs to know they will always be supported and they should in turn support each other – it’s the only way we can accomplish our goals collectively. Some chefs find that fear and militant leadership is the motivator but that has never been my intent. It helps me and my team when the mood is light and everyone is cheerful – only then is real team spirit fostered and next levels attained.”