When Ernest Toh travelled to Taiwan to visit a friend in 2016, he did not expect that his week-long trip would turn into a four-year overseas career that would see him take the reins of a MICHELIN-starred restaurant.

Today, Toh is the head chef of MUME, one of Taipei's leading fine-dining restaurants. He met the restaurant's founder, Richie Lin, over a few games of badminton. Prior to that, Toh was the executive chef of the city's MICHELIN-recommended restaurant nku, which stands for "Nordic Keep Unique", a nod to the restaurant's inspiration.

A Backpack Full of Dreams

Armed with a passion for food and adventure, Toh’s growing interest for the culinary arts matured as he completed his Nutrition studies at Singapore Polytechnic. Despite his loss in a local cooking contest, he caught the eye of esteemed chef Emmanuel Stroobant. Under his mentorship, Toh was offered an apprentice position at Stroobant’s two-MICHELIN-starred restaurant Saint Pierre. This was the beginning of Toh’s culinary journey, and it wasn’t long until he found himself hungry for more, honing his talent at other restaurants in Singapore such as Nouri, which has one MICHELIN star.

After fulfilling his reservist duties, Toh followed his wanderlust, took all of his savings and his trusty backpack, and traveled to Northern Europe, where he stayed for six months working at now-defunct Relæ (a former one-MICHELIN-starred restaurant) and Danish MICHELIN-recommended restaurant Amass.

It was at Amass where Toh met nku's David Lee. Lee was the one who invited Toh over to Taiwan to simply have fun in the kitchen and design a few dishes together, but the two men got along so well that Toh, who was only 25 years old at the time, ended up staying on to work at nku. 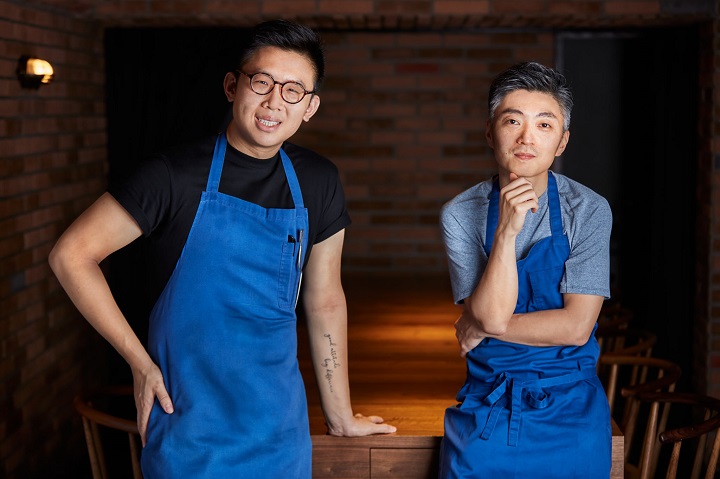 “Just like falling in love, it’s all about meeting the right person.”

Lin describes the process of inviting the young Singaporean chef to join the MUME team as “just like falling in love, it’s all about meeting the right person.”

Both men have developed a deep friendship and are well-acquainted with each other’s cooking. “I’ve always paid keen attention to Ernest’s dishes. His preferences and styles are similar to those in MUME’s. For example, Ernest is so good at discovering underrated ingredients and applying new cooking techniques. Although he may be young, he has a very mature experience in the kitchen and in leading the team,” adds Lin.

Toh, on the other hand, has long-admired Lin's ways of leading the MUME team and the MMHG hospitality group, and is eager to learn not only how to create dishes, but also how to build a group from scratch.

Where East and West Meet

Toh’s breadth and depth of experience in various gastronomic regions around the world has given him a strong culinary artillery. Both his Scandinavian and Singaporean experiences have influenced how he runs MUME’s kitchen.

"When I left Singapore years ago, I decided I wanted to spend my youth on experiences and character development. I dropped the safe route of tertiary education," he shares.

Singapore may have limited local ingredients to work with; however, the Lion City has taught him invaluable wisdom such as how to apply a strong business acumen to a restaurant, including developing a sustainable business model. The Nordic experience, on the other hand, focuses more on the process and philosophy, especially one that involves sustainability and zero-waste.

“The greater impact from my experiences is that I have learned to pay attention to both the work and the food; both customers and chefs; from infield to outfield. MUME pays more attention to the atmosphere and whether the diners enjoy themselves. It’s all about value,” shares Toh. “Therefore, I also hope to further that ‘value’ experience to diners; and by ‘value’, I don’t mean just the ‘price’.” 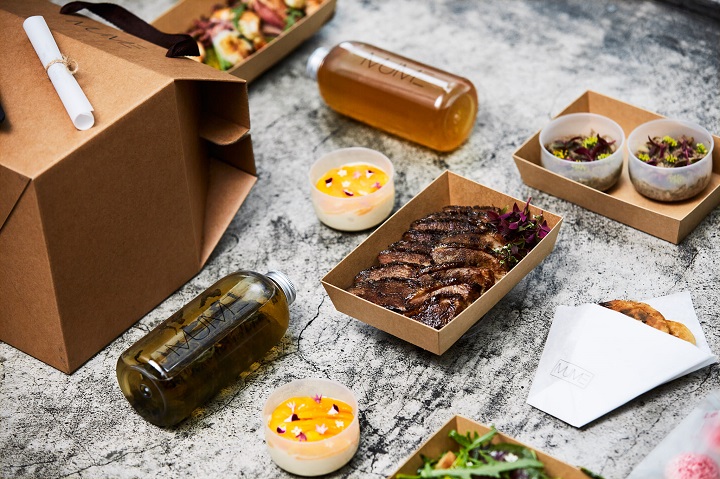 MUME launches take-away meals for the first time. Each set includes two playlists, along with the details of the chef's food, hoping to complete the dining experience of patrons at home.

Managing a MICHELIN-starred Restaurant in the Middle of a Pandemic

“After Taiwan entered the Level 3 epidemic alert, there was no choice. There was so much uncertainty looming; we didn’t know how long it would last. So, we decided to respond quickly, but the approach had to be bright. Although this take-away MUME experience cannot be compared to dining in the restaurant, the delivery concept still had to be different,” says Lin.

“When COVID-19 was on the rise here in Taipei, I started my new job at MUME, and the first task I had to do was to come up with a food delivery concept that the restaurant had never done before,” Toh shares. “I looked forward to it,” he adds brightly. “I think it could reset the way restaurants do things.”

Exercising lots of grace and finesse despite the challenging situation, Toh, along with the MUME team, developed a take-away menu that embodied the style of MUME in its dishes and gave diners-at-home something close to the restaurant experience. Accompanied by two song playlists and a butler to serve the meals upon arrival, a lot of intention and discernment was exercised in Toh’s first project.

“Apart from taking into account the food's characteristics, it had to be ensured that the taste and flavour was delivery-friendly; meaning, it could stand being transported without compromise,” explains Toh. 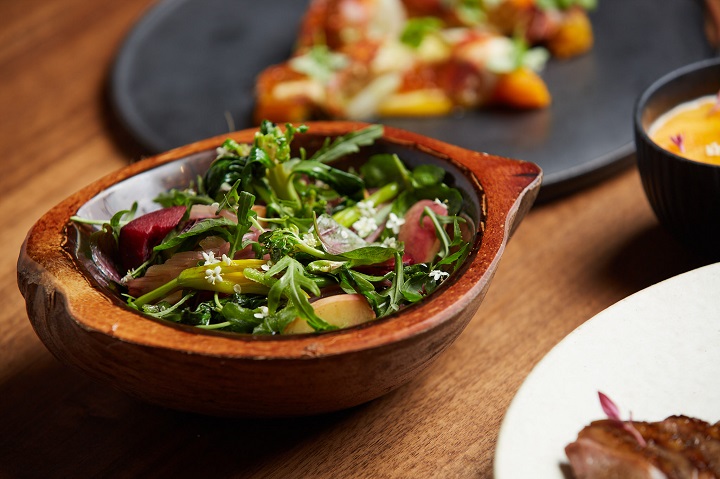 A Marriage of Flavour and Sustainability

In MUME's takeaway menu, there is a warm salad featuring seasonal vegetables, passionfruit, and kombucha where one can delight in red amaranth and golden needle flowers, which are rare on Western tables. A dish of pumpkin, white asparagus, and trout roe is delicate yet is filled with character thanks to the sauce that’s made from the components’ grilled parts.

Taking on the original style of MUME that makes use of rich Taiwanese ingredients such as plump flowers and vegetables, Toh weaves in his own touch by creating a take-away menu that focuses on maintaining the food’s nutritional value without compromising its flavour. With a penchant for using fruits and vegetables, Toh also strives to implement the concept of sustainability by practicing zero waste, an influence from his time in Scandinavia. 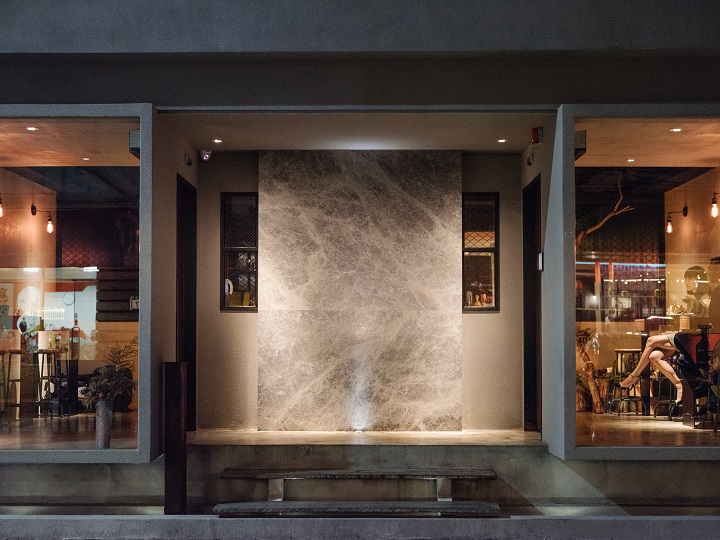 MUME welcomes a new chef and enters a new stage.

Focused on the Future

In addition to Toh's continued focus on nutrition, local ingredients, and sustainability as the pillars of his cooking style, he also hopes to continue pursuing and exploring the origins and evolutions of various traditional cuisines and elements of food culture.

“I think when it comes to fine dining restaurants, good food and good service are all fundamentals. We also need to provide customers with more valuable experiences. This will be part of my focus moving forward,” he says.

As Toh is in his early days, he and Lin will design a menu together before Toh completely takes the reins. Lin will shift his focus to ensure the growth and sustainability of MMHG, including new overseas plans that have been deployed prior to the pandemic, such as a cloud kitchen concept and possible dessert brands. “I don’t want to make MMHG the largest and most profitable restaurant group; rather, I want it to be fun, interesting, and international. My goal is for it to become one of the best and most special creative culinary groups in Taiwan,” says Lin.

Although many plans have been paused due to the epidemic, the future will still be the core focus of the group. Lin says: “In the future, no matter what form it takes, may it be a restaurant or something else, it will be the spiritual axis and the group’s mission to find more opportunities and create more interesting concepts."

This article was written by Hsieh Ming Ling and translated and adapted by Mikka Wee. You can read the original text here.

Asia Chefs and the Community COVID-19