After months of dining in at home, many customers have been raring to dine out again, and restaurants have been equally eager to welcome them back. Some have resumed their regular bill of fare, such as at CUT by Wolfgang Puck and Table65, while others have turned to a fully revamped menu or seasonal change for inspiration. Check out what’s currently cooking at these reopened MICHELIN-recommended restaurants.

We broke the news of Corner House’s new executive chef in March, but Circuit Breaker postponed David Thien’s debut menu till now. The French-Mauritian-Chinese chef has released an omakase style ‘East meets West menu without shackles’, which is what he dubs his multi-layered creations. The completely new menu is organised into three, five and seven course sets, along with a chef’s course launching later. Guests are not told what the dishes are, and will be served ‘chapters’ authored by the chef with each course detailing the thought and inspiration behind its creation. 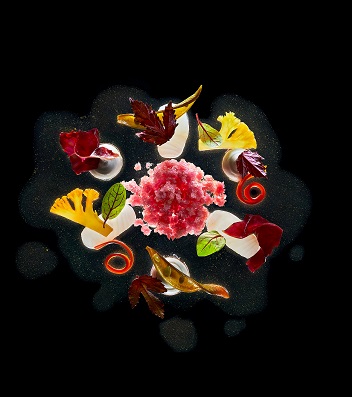 The surprises begin from the bread plate, with sambal belachan butter serving as the perfect foil for a squid ink you tiao (fried fritter). Sambal or Meuniere plays on the hawker favourite sambal stingray, using Japanese flounder and tomato to evoke the dish, while Achards is a Mauritian variation of Southeast Asian achar (right image, courtesy Corner House).

He elevates the humble condiment by serving the pickled vegetables with burrata and cured Hamachi, topped with frozen achards in refreshing granite form. The twists continue in the texturally perfect uni risotto dish (banner image, courtesy Corner House) , all the way to the Mont Blanc-inspired dessert. 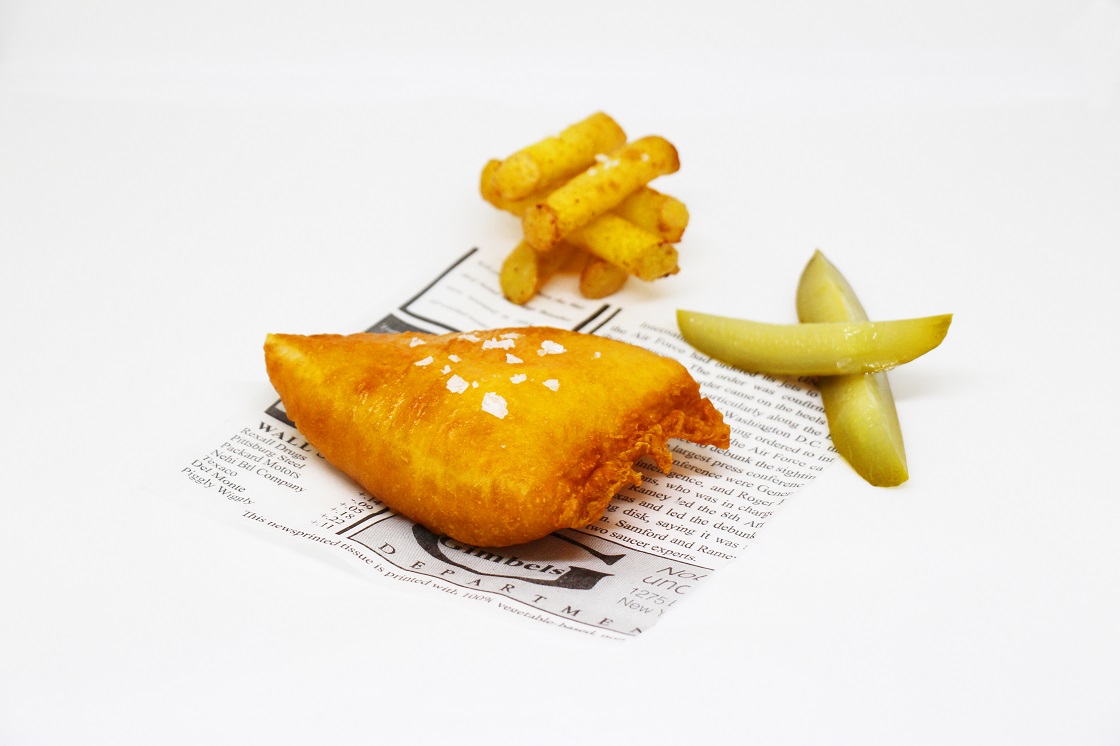 For those who miss JAAN by Kirk Westaway, you’ll be pleased to know that the restaurant will be reopening “in a few weeks”, says the executive chef. In the meantime, he has been mulling over the lighter side of JAAN for a pop-up called A: Casual British: Summer, running from 13 July for two months at Anti:dote. With the familiar faces of the JAAN team decamped to the ground floor space, it feels familiar and fun to revisit Something Light, From The Sea, From The Land, From The Garden and Something Sweet, along with a selection of quick snacks, from the short but sharp menu.

Rye Sourdough Bread with Devonshire Butter is a must to start the proceedings, paying tribute to chef’s hometown. Summery fresh dishes such as Marinated Heirloom Tomato with green basil sorbet keep things light, or you can dive into Grilled Scallop served with roasted and braised hispi cabbage, delightfully accompanied by a decadent caviar gravy. Don’t pass up the Fish and Chips, the dish that took multiple tries before chef Westaway finally nailed the texture of the London Pride Ale batter for the cod fillet and crunch of the golden fried fat Maris Piper chips. “This was the hardest dish on the menu,” says Westaway, who finally hit on the secret recipe – to brine the chips for 10 hours to remove as much moisture as possible, and also, cutting it "the uglier the better" to get broken bits for maximal crunch. 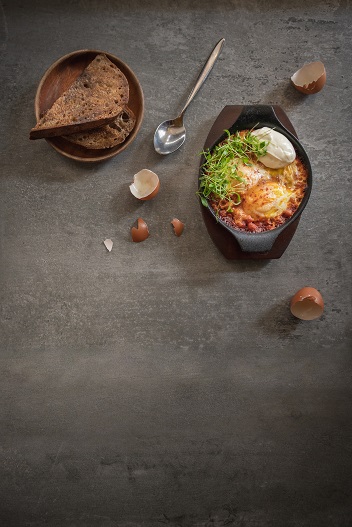 Mushrooms on Toast takes the Australian staple, Vegemite, and turns it into a custard with blue foot mushrooms and soft eggs in mushroom consommé. More eggy goodness comes in a Shakshuka (pictured, left), comprising tomato, red peppers and chickpeas. Beef Cheek and Steak Frites complete the protein quotients. The brunch menu is available on Saturdays and Sundays from 10am to 4pm.

READ MORE: Rishi Naleendra On Launching A New Restaurant During A Pandemic 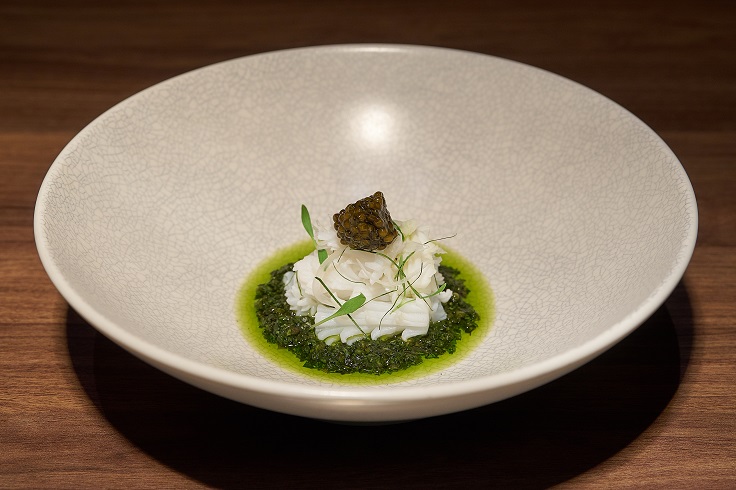 Lawyer-turned-chef Woo Wai Leong’s Restaurant Ibid stayed opened for deliveries and takeaway during Circuit Breaker, but is now purely focused on dine in. He says. “Going into Phase 2, we decided to rework everything so that we could present a much fuller experience to all our guests.” They’ve developed new dishes for the dinner tasting menu while also reintroducing some favourites from menus past, while lunch service is temporarily on hold.

The contemporary Chinese cuisine menu means that you’ll see dishes like a warm appetiser of local squid that has been cut in a traditional Chinese style then poached rapidly in dashi. Served with a Chinese-inspired sauce vierge, highlighting Taiwanese basil and coriander, it is topped with a briny dollop of Royal Oscietra caviar which adds salt to the dish when mixed together.

The main course features Australian Wagyu, cooked low and slow for three days before finishing over charcoal, and plated with garlic and Sarawak white pepper puree. Shaobing, which proved popular for takeaways as well, is back, but instead of the previous version filled with cheeses and scallions, it’s now a pan-fried bao filled with pork and foie gras, glazed with an aged Zhenjiang vinegar and pickled ginger. Shares Woo, “We are extremely proud of the latest iteration of the Restaurant Ibid tasting menu, it has been a culmination of many prior months of development, discussion and most importantly, team collaboration." 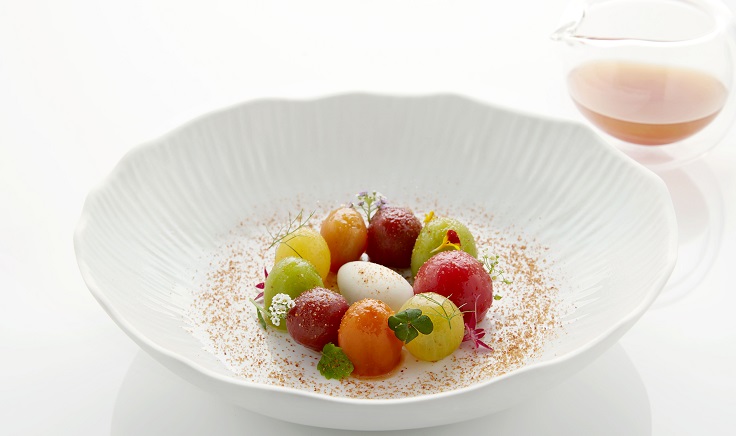 Hailing from one-MICHELIN-star Le Dame de Pic in Paris, Anne Sophie Pic’s debut in Asia at the Raffles Hotel Singapore has brought the elegance and sophistication of the chef’s cuisine to our shores. The newly launched summer menu coincides with the restaurant’s reopening in Phase 2, with Singapore chef de cuisine Kevin Gatin finessing the menu via video conference with Pic as he could not visit her in France this year as planned.

The signature Berlingots have received a summery makeover in vivid colours of heirloom beetroot, finished with a pea broth infused with herb of grace. Before that, you may receive a textures of carrot amuse bouche, with fragrant osmanthus taking the limelight. Small Asian touches anchor the sense of place, especially seen in the blue fin otoro which is accompanied by Chinese broccoli in different textures, made more complex and earthy with watercress juice and matcha butter.

The wine and sake pairings are superbly thought out, particularly when gems from Rhône are pulled out. Request for the Mas Saint-Louis Chateauneuf-du-Pape, which is aged only in cement tanks for a highly focused flavour, or head further north for the Anne Sophie Pic-Michel Chapoutier Syrah collaboration from Cornas as contrast. Both pairings work well with either the signature Saga Wagyu Beef – updated with butter roasted celeriac and black garlic mayonnaise for summer – or the new main of Pigeon from Bresse, served with a lightly smoked broth infused with Madagascan vanilla, roasted barley and kumquat.

Carpe diem – enjoy the flavours of summer while they last.