The season for feasting and get-togethers has officially begun! And while Singapore awaits with bated breath for restrictions to hopefully ease later this month, the local dining scene is prepared to wow and delight with an array of new restaurants opening this November, along with refreshed menus that offer a nod to the seasons. Here's the latest food news from our MICHELIN community. 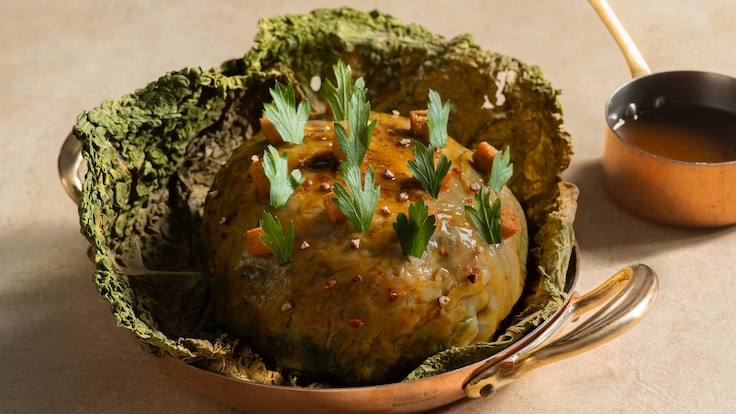 The Chou Farci at Claudine retains Royer's mother's recipe, along with his own personal touch of foie gras.

On Nov. 16, 2021, Julien Royer's second restaurant in Singapore, Claudine, will open its doors for lunch and dinner. Compared to his three-MICHELIN-starred restaurant, Odette, Claudine's concept focuses on French cuisine inspired by honest home cooking, as it is said to be a personal expression of what Royer sees as French cuisine for the present-day. Nestled in Dempsey Hill, Claudine will serve dishes that strike a balance between quintessential French classics and Royer's personal recipes, along with a few from his mother's. She is, after all, the namesake of this new restaurant. Book a table at Claudine here. 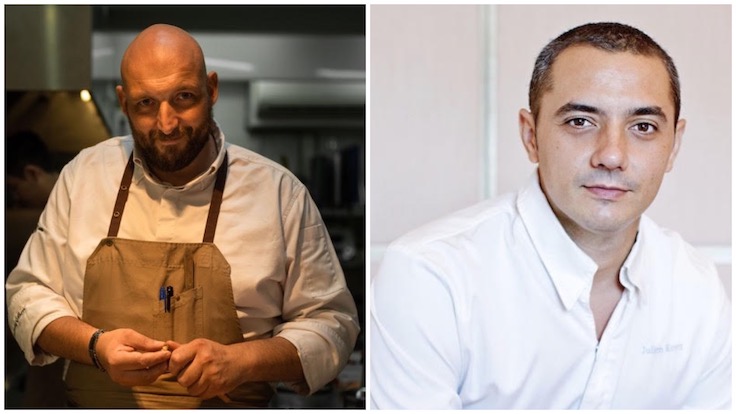 On Nov. 29, 2021, Odette's Julien Royer and JAG's Jeremy Gillon come together in a one-night-only dinner.

On Monday, Nov. 29, 2021, chef Julien Royer of three-MICHELIN-Starred Odette joins hands with 1 Star JAG's Jeremy Gillon in a very special dinner event at JAG, located at Duxton Road. This dinner event was originally slated to happen earlier this year in May, but was duly postponed because of dining restrictions.

According to Gillon: "The past year has been exceptionally challenging, with unimagined disruption to our way of life and what we love. After months of planning, regrouping, and carefully manoeuvring our diaries, we are able to make this dinner finally happen. Julien is a great friend, a remarkable chef, and an inspiring person. I am honoured to have him in JAG’s kitchen."

A celebration of heritage and friendship, Royer shares that he likewise looks forward to cooking alongside his good friend Gillon, who shares the same passion and belief as he does when it comes to cooking. "It’s wonderful to be able to come together with friends in the industry to create such unique experiences for our guests,” says Royer.

RELATED: 7 Must-Have Herbs According to JAG's Jeremy Gillon and His Herb Whisperer 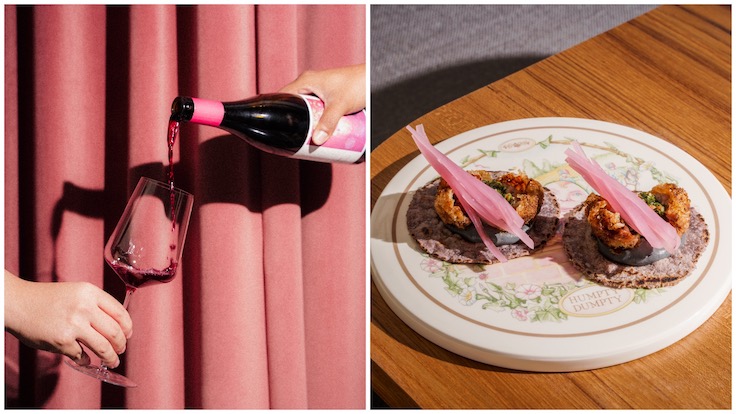 Rishi Naleendra of 1 Star Cloudstreet and Bib Gourmand recommended Kotuwa is slated to open his first wine bar, Fool, on the latter half of November 2021. An idea brought into fruition with his restaurant group's beverage manager, Vinodhan Veloo, Fool's concept is said to be "all about challenging the status quo, debunking the stigma of stuffiness around wines by presenting them in a fun, refreshing, and engaging way". The wine bar's cheeky namesake, according to Naleendra and Veloo, was aptly chosen as a reminder to not take oneself, and the wines that one drinks, too seriously.

At Fool, guests can expect a diverse selection of wines from different producers around the world, spanning a mix of styles from classic to modern. According to the Naleendra and Veloo, the wine bar aims to bring a refreshing approach to wine exploration by incorporating pop-culture references to its thematic categories such as "Lost in Translation", which features wines with unique grape varietals, whose names might not roll off the tongue quite easily.

Fool's beverage service will be led by Wolfhart Knipp, who used to be assistant sommelier at Cloudstreet for over two years, and at the helm of the wine bar's kitchen is chef Marcus Tan, who has worked with Naleendra for several years. The food menu at Fool boasts dishes, which, according to the restaurant, have been designed to complement the wines. Diners can look forward to plates such as chicken liver prepared in the form of éclair with dates and madeira, as well as veal sweetbreads that are served with burnt eggplant and chimichurri on house-made blue corn soft tacos. 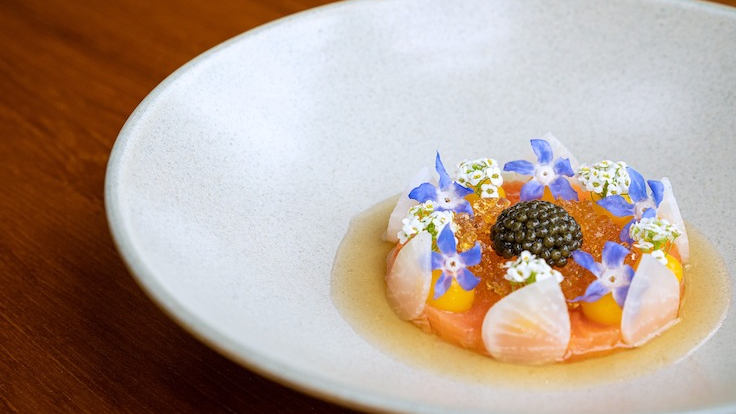 4. Autumn has Arrived at Sommer

Praised by our Michelin inspectors for dishes that exhibit acumen, finesse, and harmony, one-MICHELIN-Starred Sommer located at Singapore's banking district swaps its summer menu for a seasonal autumn selection. Giving way to produce that shines in colder weather, a line-up of dishes that include root crops and fall fare such as Jerusalem artichokes, Tokyo turnips, salsify, chestnuts, and figs give diners a glimpse of autumn in the midst of Singapore's eternal summer. Book a table at Sommer here.

RELATED: The First Day We Got Our Stars: Lewis Barker of Sommer 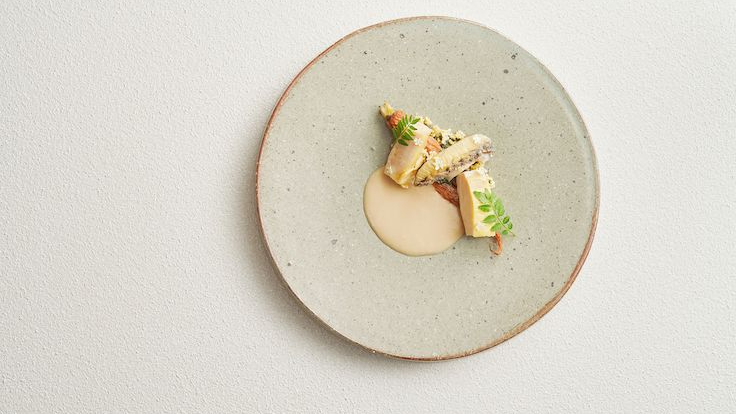 In Korean, the word naeum referes to a fragrance that evokes memories. Helmed by chef/owner Louis Han, NAE:UM in Telok Ayer focuses on gastronomy inspired by Han's hometown of Seoul. Part of the opening team and former sous chef of 1 Star Meta, Han also worked as the sous chef of two-MICHELIN-Starred Mosu in Seoul before coming back to Singapore to open his inaugural restaurant, NAE:UM.

At NAE:UM, the seasonal menus are presented in chapters, or "episodes", as the chef calls them. With the first one coming to a close, which featured Han's favourite ingredients, NAE:UM's second episode called "Mountain Lodge" is inspired by the mountains of Korea. The new menu is reminiscent of his memories at his grandmother’s home, sitting at the foot of Mount Cheonggye, hiking to discover great food, which is a perennial activity for Han and his family. According to Han, this particular menu imbues a feeling of reawakening and reconnecting, which is befitting for these current times as the world adapts and reopens.

NAE:UM's Mountain Lodge menu comprises dishes that make use of autumn and winter ingredients such as sea bream with acorn jelly, winter mushrooms with daikon, and Iberico pork with burdock. Make a reservation at Naeum here. 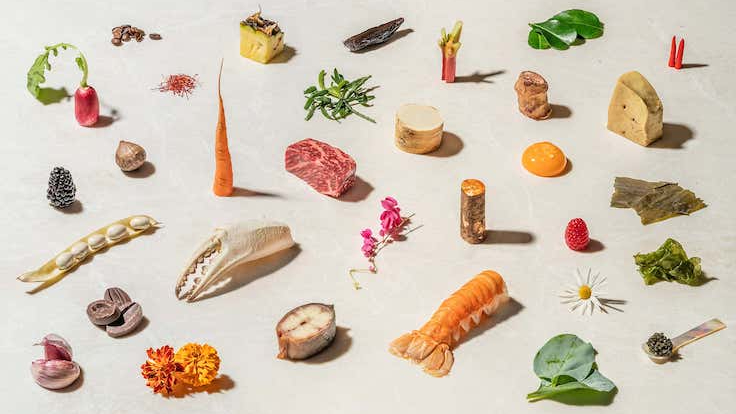 Marguerite opened its doors this early November and is located at Pollen's former space at Gardens by the Bay.

6. New Restaurant Marguerite Replaces Pollen at Gardens by the Bay

Formerly from one-MICHELIN-Starred Phénix in Shanghai, Melbourne-born chef/owner Michael Wilson has opened restaurant Marguerite at what was once the premises of Pollen at the scenic Gardens by the Bay. According to Wilson, Marguerite is his expression of his evolution and growth as a chef, and his 7-course menu featuring contemporary cuisine displays his personal celebration of craft and provenance. Diners can expect dishes such as heirloom carrots paired with marigolds, wild red kangaroo with blackberry and macadamia, as well as home-made fermented temperance beverages that are served pre-dessert. Book a table at Marguerite here. 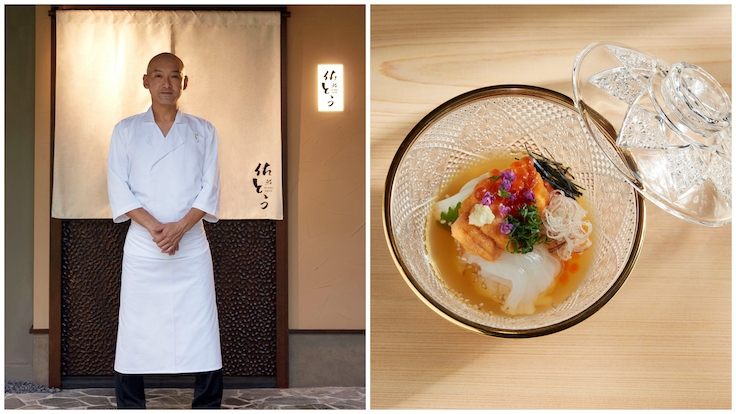 Born and raised in Hokkaido and with over 26 years of experience, Sato may be a familiar face to sushi enthusiasts in Singapore as he was once part of the team of chefs at formerly MICHELIN-listed Hashida. Now with his own venture at Dempsey Hill, Sushi Sato, which officially opened this Nov. 1, 2021, is the first namesake restaurant of the chef, who is well-known for his knife skills.

At Sushi Sato, diners can expect his omakase menu to be punctuated by small grilled fishes or sashimi in between. Sato exhibits a self-coined approach that he refers to as "hot is hot, and cold is cold", where every fish is cut only during serving time, and each hot dish is prepared in the same room and served immediately to keep its inherent qualities as intended by Sato. Seafood is delivered four times a week from the Toyosu and Sapporo markets in Japan, and Sato serves his signature ika somen on Tuesday and Friday dinners. In this signature dish, squid is sliced into thin, noodle-like strands and is served with a dashi, mountain yam, ikura, and uni. His sushi creations also feature a special Tsuyahime rice from the Yamagata Prefecture, and is combined with three distinct Japanese red vinegars. Make a booking at Sushi Sato here.