Fourth generation of a line of remarkable chefs, Anne-Sophie Pic is France’s only female chef to hold the ultimate triple-star rating of the MICHELIN Guide. Since taking over the stoves of Maison Pic in Valence, France, in 1997, this diminutive woman with a Mona Lisa smile and an iron will has carved out a place for herself at the summit of a male-dominated profession.

With the collaboration of her husband David Sinapian, she has modernised and expanded the 130-year-old family establishment. What began as a modest auberge, opened by another Sophie, Anne-Sophie’s grandmother, in 1889, the Pic enclave in Valence now includes an elegantly remodelled hotel and restaurant, a bistro, an epicerie fine, a cooking school and a fast-casual concept based on gourmet verrines, called Daily Pic.

In addition, Pic has taken the family name both nationally and internationally, first with the opening of a restaurant in Paris, La Dame de Pic, followed by two other Dame de Pic restaurants, one in London and the most recent in Singapore, which opened in the newly-refurbished Raffles Hotel in July of this year. She is also the talent behind the two-MICHELIN-starred restaurant of the Beau Rivage Palace in Lausanne, Switzerland. 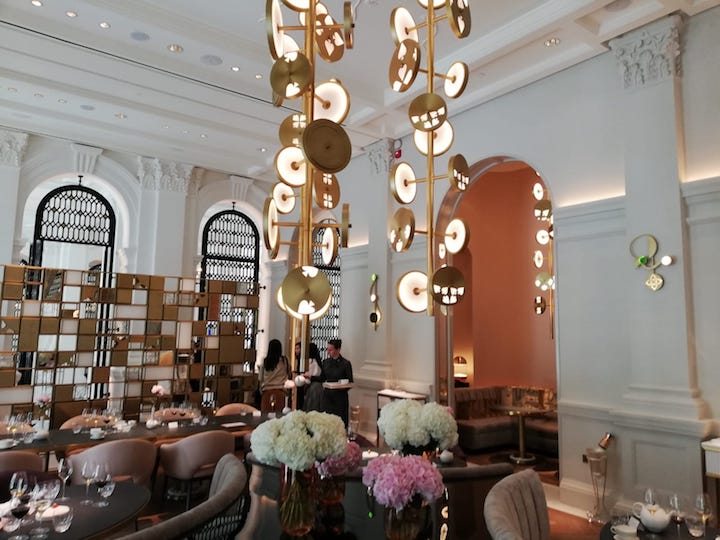 The interior of the new Dame de Pic in Singapore. (Photo by Kenneth Goh.)

Despite her family legacy, Pic’s success was far from a given. After a childhood in Valence bathed in the fragrances and flavours of her father’s kitchen, the young girl categorically rejected the idea of a culinary career, opting for international studies in a management school where her path crossed that of her future husband. After traveling and working in the United States and Japan, Pic realised that haute cuisine was her passion and calling. She returned to Valance to put her destiny in the hands of her father, Jacques, the third generation of Pic’s at the helm of the now famous address. By a cruel twist of fate, Jacques died suddenly shortly after his daughter’s return, leaving his apprentice without her mentor at just 23 years old.

Challenging years followed when the young woman was often relegated to administrative tasks before finally asserting her will to take her place in the kitchen. Pic trained with relentless determination, following the family tradition, while forging her own style. “The first dish that signalled my emancipation,” she recalls, “was my pigeon with walnut crust, a personal creation [that] echoed a family classic”—her father’s pigeon Florentine.

Her efforts were compensated: In 2007, Pic won back the third MICHELIN star, lost after her father’s death, and became the first woman chef since 1951 to run a kitchen with the esteemed rating, and only the fourth woman in the history of the red guide to have this honour.

In this lighthearted chat, we find out where and what this celebrated chef eats outside her kitchen.

What was the last thing you ate?
A praline tart.

It's your day off. What do you order for breakfast and where? (Outside of your own restaurants.)
I’m in Corsica, on a terrace, taking advantage of the last rays of summer sun. And I’m [enjoying a breakfast of] green tea and a madeleine.

What is your 2:00 a.m. food order or favorite spot?
At 2:00 in the morning, I’m hungry for something savory. I’d order a piece of boutefas, a smoked sausage from the canton of Vaud in Switzerland, accompanied by a piece of sheep’s cheese.

What is your local coffee shop and what do you order?
I go to Hippolyte Courty’s L'Arbe à Cafe in Paris. And I ask him for a Geisha au Chemex, because I love coffee infusions.

Where do you go when you travel to your favourite city?
At the moment this would be in Singapore, in one of the hawker centers of the city, which are fascinating places for observing and tasting street food.

What is the "laziest" meal you put together for yourself this past week?
A tomato with fleur de sel, and a few drops of Baume de Bouteville, an extraordinary French balsamic vinegar.

What is your favourite snack food and why?
A good tarama with rye gressins (breadsticks), because this is a simple and harmonious combination.

What do you like to eat when you want to treat yourself?
Chocolate! It’s gourmand, it gives me energy. I’ve loved chocolate since childhood, undoubtedly because I grew up very near the home of Valrhona chocolate.