As the mid-point of autumn falls on 21 September this year, preparations are underway for one of the most loved Chinese celebrations in the lunar calendar. Mid-Autumn Festival, also known as Mooncake Festival, was traditionally a Chinese end of harvest festival, taking place on the day of the brightest full moon. Baked mooncakes representing the moon were eaten by families to symbolise unity and togetherness, while washing down its sweetness with a cup of tea. Modern snowskin mooncakes, invented in Hong Kong, came much later in the 1960s, with fillings that veer into dessert territory.

While the mooncake remains outwardly the same, it has proven to be a popular vessel for chefs to practice their creativity. From alcohol-filled creations to savoury ones loaded with luxury ingredients, the moon is the limit for imaginative flavours and cross-cultural inspiration. The pairings, too, have evolved, from tea to wine and cocktails. Regardless which camp you’re on, this year’s MICHELIN restaurant and Tablet hotel-listed mooncakes will encourage you to have a taste of this delicacy with their wide range of creations. 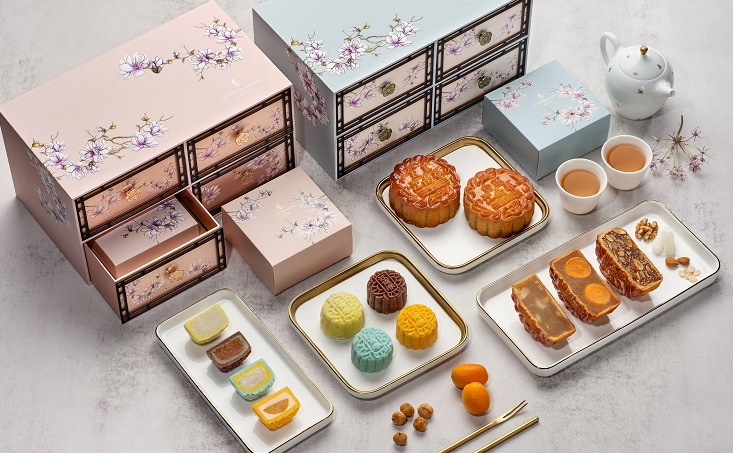 Four Seasons Hotel Singapore introduces limited edition snowskin mooncake flavours, under the purview of executive Chinese chef Albert Au from the hotel’s one-MICHELIN starred Jiang-Nan Chun. The new kumquat and lemon ($82/box of 4) combination recalls traditional Chinese customs, with the sweet-sour zing tempered by a charming vanilla-lemon pastry cream. Appealing to everyone in the family are the bird’s nest with custard ($92/box of 4), and hazelnut royaltine chocolate ($82/box of 4) snowskins, a take on the Four Season’s hazelnut royaltine cake. Long-time fans know to book the baked mooncake with smoked duck and assorted nuts and lime ($80/box of 4), a perennial favourite inspired by Jiang-Nan Chun’s wood-fired Peking duck.

Pairing: An intriguing suggestion comes in the form of Copenhagen organic sparkling tea ($88), containing Silver Needle tea in the Lyserod, or jasmine and chamomile in the Bla. An alcoholic version, Gron ($98) at 5% gives a gentle buzz with green tea and citrus notes. 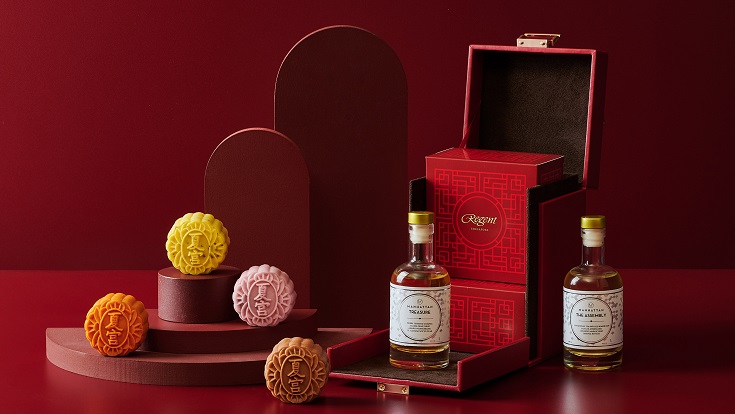 At one-MICHELIN star Summer Palace at Regent Singapore, dim sum chef Leong Kwok Sing creates notable snowskin classics such as the signature black sesame paste ($85/box of 8), amply filled with rich, finely ground sesame. This year's new creation — filled with goji berries with osmanthus and dried strawberries ($87/box of 8) — steals the limelight with its lighter, floral notes. Since 2018, chef Leong has also worked with Regent Singapore’s outlets to create a Snowskin Collection ($90/box of all 8 flavours). Meanwhile, Basilico's Amalfi limoncello & basil mooncake marries Italian flavours with smooth white chocolate – a well thought out combination. The hotel's Manhattan bar gets in the game too with a mooncake that features Ki No Bi dry gin with the sweet fruitiness of Kyoho grape, encased in a jelly-like centre.

Pairing: Manhattan has once again crafted bottled cocktails that match the flavours of the snowskins. Treasure ($24.30) has a cognac base with jujube pear syrup and spiced pear liqueur, while The Assembly ($24.30) echoes the notes of the Kyoho grape mooncake with an osmanthus tea-infused Ki No Bi gin with maraschino and orange bitters. 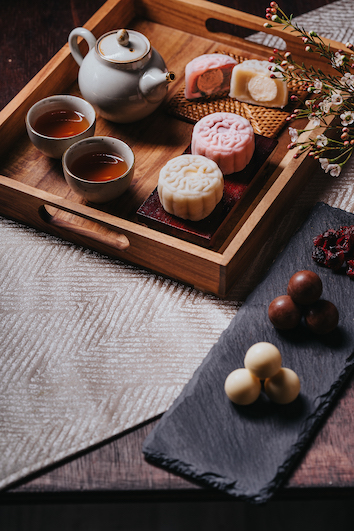 An ode to Chef Chen Kentaro’s hometown of Yokohama during autumn, two-MICHELIN-starred Shisen Hanten’s mooncake collection comes in an intricately illustrated midnight-blue box that showcases the full moon of the mid-autumn festival.

Each box holds either your choice of four baked mooncakes or eight snowskin ones. A new addition to their baked mooncake selection is the Japanese Pumpkin and Sakura Petals with Low Sugar White Lotus Paste ($79nett/4 pieces), which is an embodiment of Japanese culture. The pastel snowskin mooncakes come in charming combinations such as Yam and White Chocolate, Red Wine Cranberry with Oolong Tea, Green Tea and Azuki Red Bean, and Lychee Martini and Chocolate. Get eight pieces of a single flavour or two of each for $75nett.

Various early bird promotions are available for those who purchase from today until 21 September 2021. Order online here. 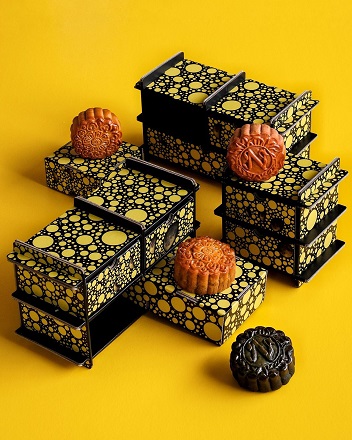 One-MICHELIN Star Nouri is back with unique mooncake creations for the second year. Borne of chef Ivan Brehm and team’s research and respect for local food traditions, Moonlight ($78 for 2 or $138 for 4) comprises four different festive baked mooncakes in collaboration between Nouri/Appetite and Minerva Passion. The packaging reflects aboriginal art on a fully bio-compostable and sustainable box, a welcomed change from the typical.

Of the four flavours, the dark burnished Long Night Moon presents the most intriguing blend of Longjing green tea and nori powder, with pops of French candied chestnuts and egg yolk, for a sense of the familiar yet not. Complementary umami notes are echoed between the nori powder and the fragrant wok-fried green tea, adding more complexity to the lotus paste. 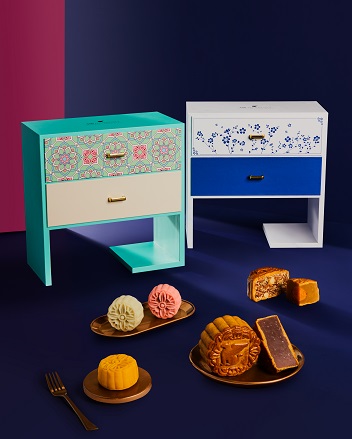 Creating a stir with their packaging this year is MICHELIN Plate listed Madame Fan at JW Marriott Singapore. Available in Blue Blossom or Peranakan Teal, the striking gift boxes are shaped in the Mandarin character for moon, and hold either four baked mooncakes or eight snowskin ones. The baked options come in low sugar form, including the single yolk lychee lotus paste ($82/box of 4) and double yolk lotus paste ($88/box of 4), while the blueberry paste with chia seeds ($80/box of 4) makes a welcomed return. 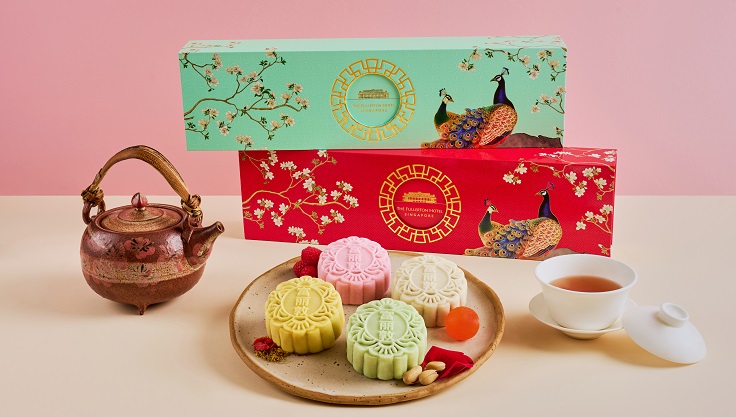 Executive Chef Leong Chee Yeng at MICHELIN Plate Jade Restaurant never fails to exercise his poetic license when it comes to Mid-Autumn. Snowksin creations this year from Fullerton Hotel Singapore play on blossoms, berries and brewed tea, and are carefully crafted to contain lower sugar. The highly recommended Treasures set ($72/box of 4) contains one each of the raspberry Hokkaido milk; rose green tea with pistachio; osmanthus with wolfberry; and white lotus seed paste with single yolk, for a combination of modern and traditional. From the baked selection, two new flavours enchant: oolong tea with dried cranberries ($74/box of 4) and rose coconut ($72/box of 4). The latter is inspired by chef Leong’s signature rose coconut shaved ice dish at Jade, and makes for a memorable dessert in baked form. 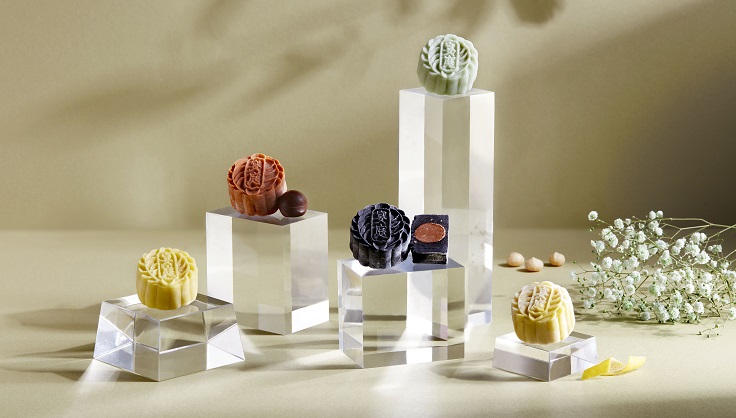 The St Regis Singapore’s Yan Ting, a MICHELIN Plate-rated restaurant, brings back its collectible glass boxes in three colours this year: arctic blue for the single tier boxes and sapphire pink or "King Cole red" for the two-tier boxes. Just as striking is what’s inside the boxes. Snowskin lovers will find the new royal milk tea paste with gula melaka truffle ($83/box of 8), a sophisticated play on brown sugar milk tea, as well as refreshing yuzu paste with lemon citrus ($81/box of 8) and a winning combination of pandan paste with macadamia nuts ($81/box of 8). These are also available in an assorted selection box containing two of each flavour, so that you can enjoy the signature black and white sesame with salted peanut truffle snowksin ($83/box of 8) as well.

Order online here or call 6506 6852. Savings of 20% for St Regis Supper Club and Marriott Bonvoy members, and 15% + 5% for purchases with American Express, UOB, Mayband and Standard Chartered cardholders before 31 Aug (collection from 6 Aug). 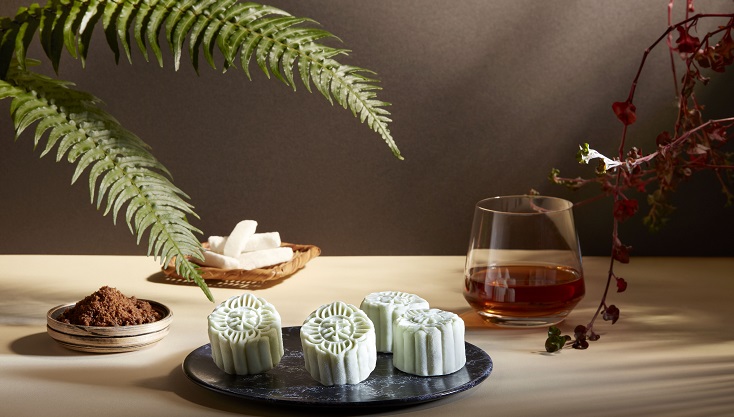 Raffles Hotel Singapore, a Tablet hotel, is long associated with their legendary Champagne truffle snowskin ($79/box of 8), a delicately encased lotus paste creation. This year, they have taken inspiration from Jereme Leung’s Yi restaurant to debut the Da Li rose and strawberry chocolate snowskin and Yunnan dark brown sugar and rum truffle snowskin (each $78/box of 8). The Da Li rose is known for its sweet aromatic verve, and here it is layered with chocolate and strawberry for full effect. Lovers of Yunnan brown sugar will find its caramelised notes well paired with rum and candied winter melon, giving an earthy aftertaste.

Pairing: Aside from a Raffles Signature like the jasmine ($32), head bartender Nicholas Alexandar of Writers Bar has also created two cocktails. Mid-Autumn Dream ($28) blends gin and vermouth with pickled winter melon and cocoa butter, while the Lunar Glow ($28) takes inspiration from pu’er for a Scotch and chocolate combination. When in doubt, you can’t go wrong with serving the Raffles-exclusive Billecart-Salmon Champagne Brut Réserve ($98) and Champagne truffle snowskin together. 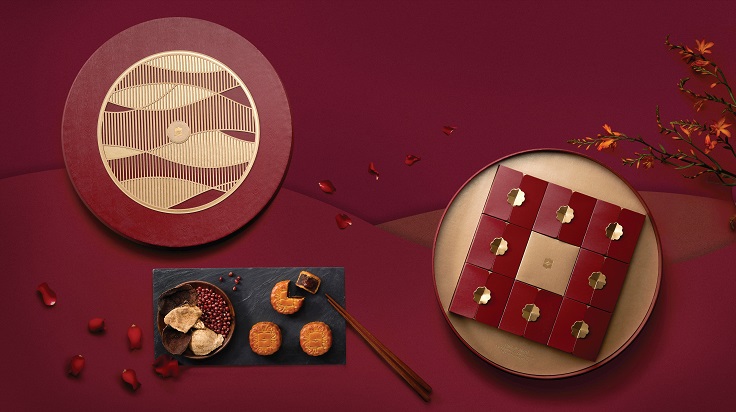