At the heart of the kitchen in Jiang-Nan Chun is a roaring mesquite wood-fired oven, a fixture perhaps more at home in a rustic pizzeria or a boisterous Australian barbecue—but at the one-MICHELIN-starred fine dining Cantonese restaurant in Four Seasons Hotel Singapore, it finds its place turning out beautifully burnished Peking roast duck under the careful hands of newly appointed Chinese executive chef Albert Au.

With almost three decades of culinary experience under his belt, 42-year-old Au is also famous for becoming the world’s youngest Chinese chef to obtain the coveted three-MICHELIN-star status in 2014 for The Eight in the Grand Lisboa Hotel in Macau. He was most recently the executive chef for the Hong Kong Lai Sun dining group, managing its luxury Chinese restaurants such as China Tang, Island Tang and Chiu Tang.

The Hong Kong-bred chef now finds himself helming Singapore Cantonese stalwart Jiang-Nan Chun, where he has just launched a new dining concept based on xiang le zhu yi, or “the principle of enjoyment and happiness”. Au’s refined Cantonese cuisine embraces seasonal ingredients and special cooking methods to espouse wellness and nutrition with an element of surprise—take for example, the wood-fired roast duck, served both Peking- and Cantonese-style with a modern touch of Avruga caviar, or the nourishing double-boiled soups such chicken with fish maw, Matsutake mushroom and Chinese cabbage, painstakingly boiled for eight hours. 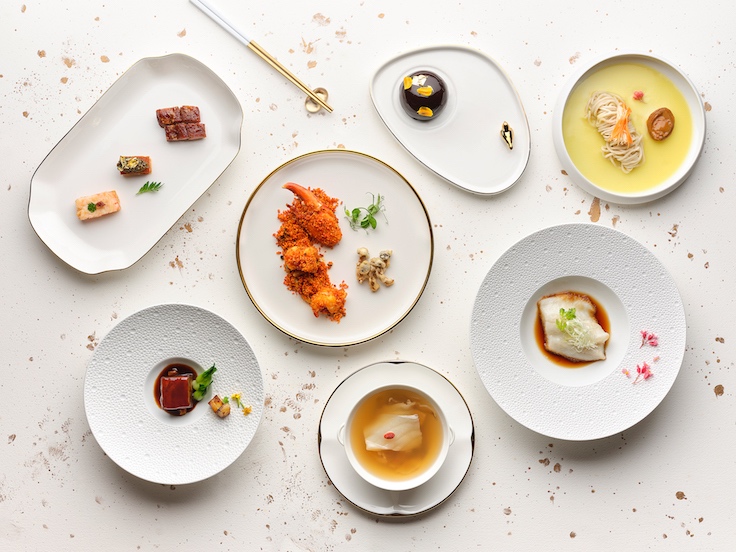 “The kitchen has always been my calling as it allows me to constantly dream and create new dining experiences based on sound culinary techniques,” he says. “I am especially excited for this new chapter with Jiang-Nan Chun as its principles of refined pleasures through culinary mastery resonates with me.” Here, the chef shares why he has moved to Singapore and what else he is looking forward to here.

How did it feel when you received three MICHELIN stars for The Eight in Macau back in 2014?
I was 36 years old and I was elated to become the youngest Chinese chef to receive three stars. Achieving the MICHELIN stars was a notable achievement and acknowledgement for myself and my culinary team as it is only possible because of all the team’s work and efforts.

Since receiving the MICHELIN stars, my career has also taken me to different parts of the world with many great experiences along the way – one of these led me to Singapore for an exclusive dining event at Jiang-Nan Chun in 2017.

Why have you decided to relocate to Singapore now?
There are a lot of similarities between Singapore and Hong Kong yet there are many differences as well. It’s a well-known fact that Singaporeans love their food and enjoy trying new cuisines, very much like in Hong Kong too. What gets me excited is being able to share Chinese and Cantonese food and culture with people.

What are you most looking forward to exploring in Singapore?
I have visited most of the MICHELIN-starred Chinese and Cantonese restaurants in Singapore and now I’m looking forward to explore every nook and cranny in Singapore – from fine dining establishments to food courts and hawker centres. Next on my list is Candlenut for Peranakan cuisine. I’m intrigued by the spectrum of spices and flavours in Peranakan cuisine! I also want to check out all the hawker stalls at the Old Airport Food Centre if possible.

How would you describe your cooking philosophy?
I focus on authentic Cantonese cuisine and cooking techniques using only quality ingredients. I appreciate and have a sincere respect for fresh, seasonal produce, and as such, I make it my passion to bring these unadulterated flavours and textures to the fore through imaginative yet classic culinary techniques that celebrate traditional dishes in a fresh perspective.

What changes can diners look forward to at Jiang-Nan Chun?
We will be presenting freshly-sourced seasonal produce in curated menus that feature culinary artistry and a sharp focus on the holistic dining experience with each visit to Jiang-Nan Chun.

New in Food: Where to Get Crab and New Menus at MICHELIN Restaurants