The names Julien Royer, Rishi Naleendra or Han Liguang may not ring a bell to them, but workers lodging at the Goldmine Energy Tuas Factory-Converted Dormitory (FCD) will be getting a taste of the food from these chefs of MICHELIN star restaurants in Singapore.

Starting this week, a network of local chefs such as Royer of three-MICHELIN-star Odette, Han of MICHELIN-star Labyrinth, Naleendra of one-star Cheek Bistro and Cloudstreet, along with Shigeru Koizumi of Esora, Jason Tan formerly of Corner House, and Willin Low of Relish and Roketto and many more, have come together to contribute their recipes and expertise to the Straits Clan Community Kitchen.

The initiative put together by The Lo & Behold Group (TLBG) — the restaurant group behind Odette and private members club Straits Clan — is committed to preparing 450 meals per day, seven days a week to the migrant workers in critical need of food support at the Goldmine Energy Tuas FCD. This initiative will last throughout the duration of the coronavirus "circuit breaker" measures put in place by the Singapore government till next month, with the possibility to extend depending on available funds and resources.

Daniel Sia, culinary director of TLBG, and Damian D’Silva, executive chef of the group's Singaporean restaurant Kin, lead the effort out of the Straits Clan kitchen together with volunteer staff members of the Straits Clan. The chefs and volunteers will be working within guidelines on the current restrictions of movement to honour the commitment of 450 meals a day, says Sia.

“We feel incredibly fortunate to continue serving and feeding our community in any way we can. The migrant worker community has quickly emerged as a group in critical need of food support. We can't forget that we owe it to their back-breaking labour for the restaurants we cook in, the homes we live in, and for the ecosystem they helped build,” he adds. 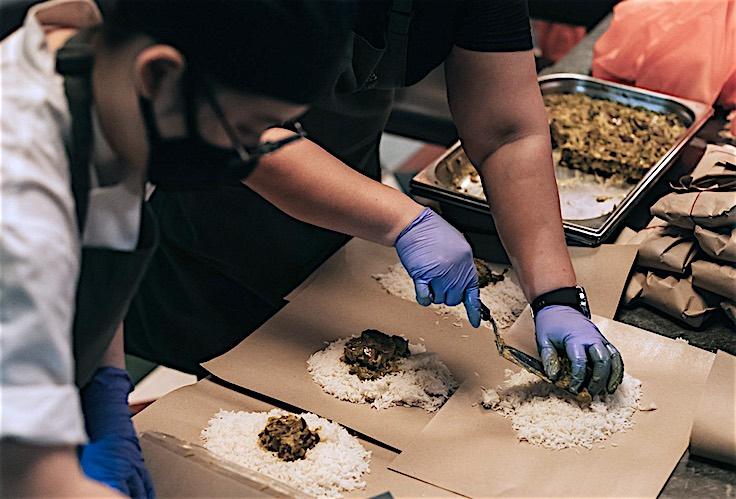 “Now more than ever, we want to give back and show our gratitude by preparing quality, nutritious meals to feed them, and hopefully bring them some comfort and food security in times of uncertainty,” says D’Silva. The daily changing menus will cater to the tastes and preferences of the migrant workers who are largely South Asian, he adds.

The recipe contributions from the participating chefs include rasam, a nutritious and comforting South Indian soup, vegetable kheema, as well as an assortment of familiar chutneys and condiments. The dishes will be made from fresh produce supplied at subsidised rates by local sustainability-focussed start-up Ugly Food.

This effort is fully funded by generous contributions from the community and with support from the #HOMEFORALL fundraiser led by Collective of Migrant Efforts (COME), which joins hands with the Alliance of Guest Workers Outreach (AGWO) and more than 10 other NGOs and government agencies.

“The strain on resources will be especially acute during the Ramadan fasting month. It is gratifying that Straits Clan is not just doing its best to feed the migrant workers, but to prepare quality meals that will bring them familiarity and comfort in this difficult time,” says Kari Tamura Chua, spokesperson for the #HOMEFORALL campaign and founder of Sama-Sama, a migrant worker welfare group also involved in the initiative. Chua adds that members of the public can support the efforts by continuing to donate to the #HOMEFORALL campaign to help frontline NGOs and caterers to prepare to meet the needs of migrant workers that will emerge in the circuit breaker extension.