TAIWAN, 25 August 2021 – Michelin is pleased to present today its full list of restaurants in the 2021 edition of the MICHELIN Guide Taipei & Taichung, together with the Bib Gourmand and MICHELIN Plate highlights. In this latest edition, a total of 177 venues in Taipei and 69 venues in Taichung have been selected by the MICHELIN inspectors.

“It has been yet another extraordinary year for everyone, especially for the food industry. In spite of the challenges, the chefs and restaurants in Taipei and Taichung have never ceased to impress our teams. By imagining new concepts, launching new initiatives, and creating means of preserving the link with their diners, both cities have shown agility, resilience, and creativity. These two destinations have also succeeded in maintaining their culinary skill at the highest level. We are so proud, and with this 2021 edition, we highlight and pay tribute to their talent while unveiling new gastronomic gems,” says Gwendal Poullennec, International Director of MICHELIN Guides. “I am also particularly delighted that the MICHELIN Green Star is making its entry into the MICHELIN Guide Taipei & Taichung, highlighting the sustainable commitments of two pioneer restaurants. May this distinction encourage and inspire not only other restaurants, but also every keen gourmet.” 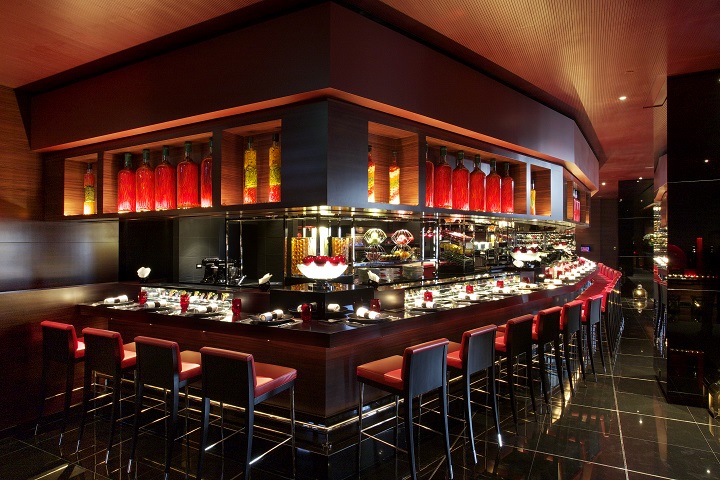 L'Atelier de Joël Robuchon, helmed by Chef Florence Dalia, has been been promoted to Two MICHELIN Stars this year.

L'Atelier de Joël Robuchon, which has been awarded a MICHELIN Star for the past three years, has been promoted to Two MICHELIN Stars this year. Chef Florence Dalia, who has helmed the kitchen since 2019, is the first female head chef in the group’s Asian bases. She adds an ethereal touch to the restaurant’s distinctive cooking and re-invents French classics with skill, care, and a plenty of aplomb.

In the 2021 selection, there are a total of 7 Two MICHELIN Starred restaurants in Taipei, including Logy, RAW, Shoun RyuGin, Sushi Amamoto, Taïrroir, and The Guest House, all of which maintain their Two MICHELIN Stars. 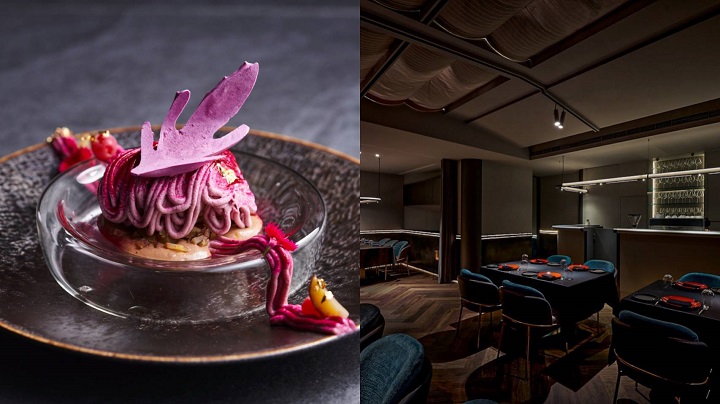 The interiors of De Nuit are low-key and elegant, with a calming design that evokes the night-time. The young kitchen team is professional and combines the essence of French cuisine with seasonal and local ingredients to present unique and ingenious dishes.

Three restaurants debut in the MICHELIN Guide Taipei & Taichung 2021 selection with One MICHELIN Star. Christened “By Night” in French, De Nuit’s décor is aptly furnished according to its name. The young kitchen team layers textures and flavors in every dish, while respecting the French traditions and the seasonality of ingredients.

T+T, whose name is an abbreviation of “Tapas Tasting”, provides a creative take on Spanish tapas. The small plates display strong Asian roots, and its eclectic wine list carries some interesting choices. 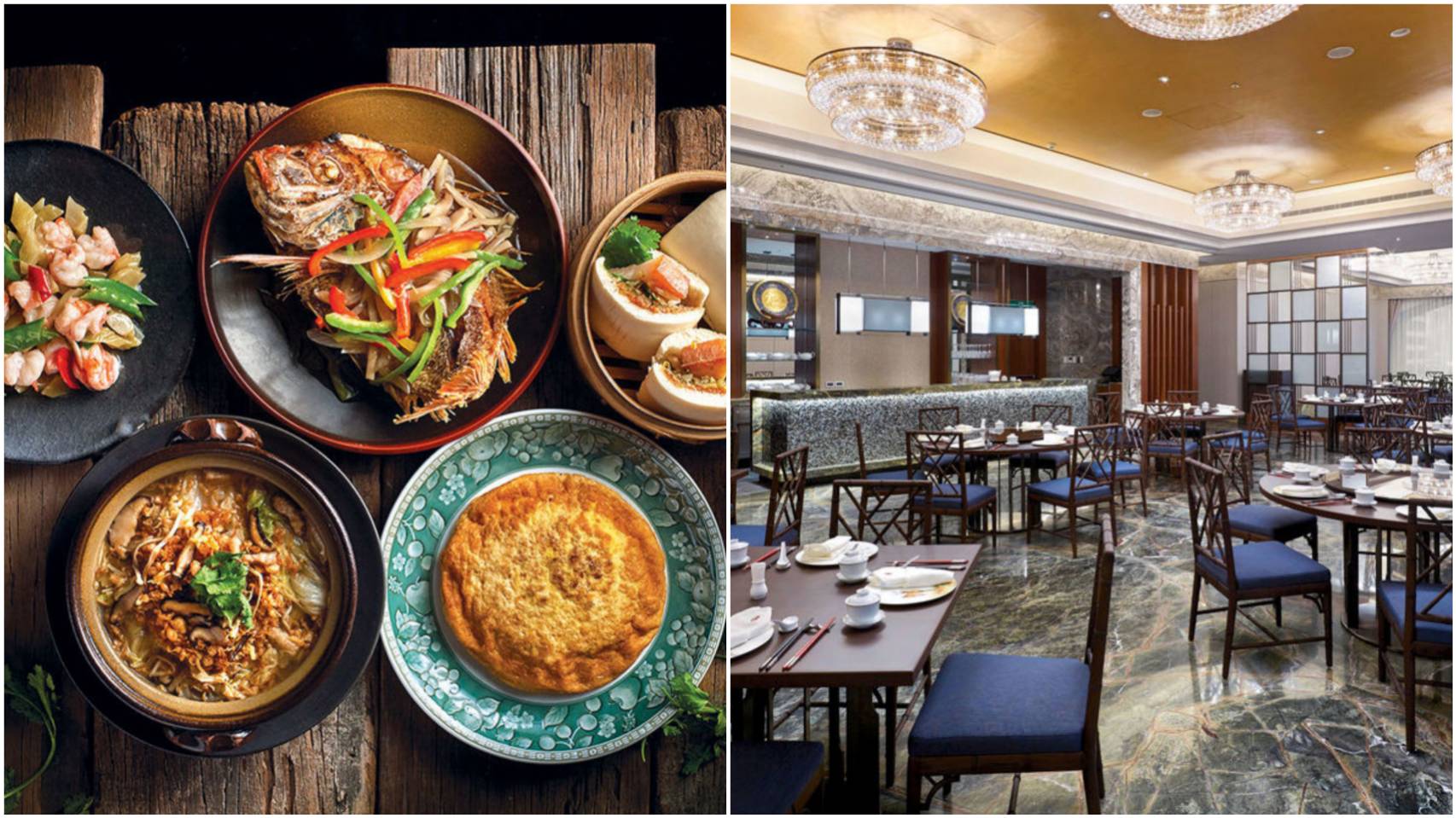 Two restaurants were promoted to a 1-Star rating from a MICHELIN Plate distinction. Taiwanese restaurant Mipon specializes in refined home-style Taiwanese cooking that boasts intricate details and modern twists. At Mudan, seasonal ingredients from Taiwan and Japan are coated in a delicate batter and deep-fried to perfection.

With these new additions, Taipei has a total of 21 One MICHELIN Star restaurants.

Cantonese restaurant Le Palais maintains its standing as the only 3-Star restaurant in Taipei and Taichung. In total, the 2021 edition of the MICHELIN Guide Taipei & Taichung recognizes 29 MICHELIN Star restaurants in Taipei.

In addition to the six newly starred restaurants, there are 14 restaurants in Taipei that have newly entered the selection with a MICHELIN Plate distinction. They span a diverse range of cuisines, from contemporary European (CEO 1950), innovative (Embers, Holt, and MU:), Italian (Artbrosia), French (Bistro le Jardin), Taiwanese (44 SV and Sinchao Rice Shoppe), and Japanese (Tsuki Yo Iwa and Uke); as well as various styles that include yakiniku (Baho), steak (Fresh & Aged), sushi (Shan Chiu), and vegetarian (Yangming Spring Shilin) — proving that Taipei is indeed a dynamic and exciting gastronomic center that gathers culinary talents from all over the world. 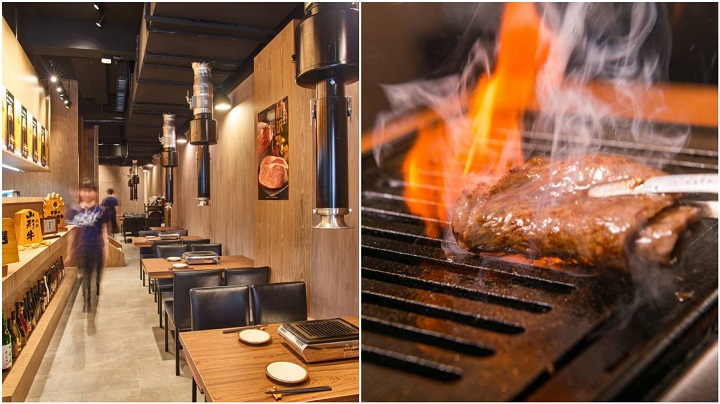 Oretachi No Nikuya, which received a 1-Star rating in the 2020 selection, relocated to a new venue just 15 steps away from its old store. It was again selected as a One MICHELIN Star restaurant this year.

In the second year of the selection for the city of Taichung, Oretachi No Nikuya has yet again received a MICHELIN Star. The restaurant relocated in late March to a new venue just 15 paces away from its previous address and the awarding of a MICHELIN Star is recognition of the yakiniku restaurant’s continued high standards in its offer of prized Hida beef cuts and rare breeds, along with a secret menu for those-in-the-know. 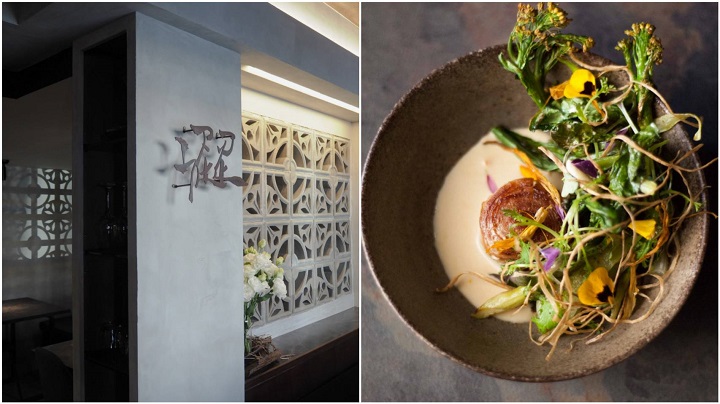 Sur is promoted to One MICHELIN Star from its Plate distinction. The prix fixe menu showcases the changing of the seasons and everyday life.

Receiving a promotion to 1-Star from its MICHELIN Plate distinction is Sur, named for the young chef-owner’s vision to elevate everyday Taiwanese ingredients to haute cuisine through the use of modern techniques and a prix fixe menu that changes every season.

Besides Oretachi No Nikuya and Sur, Fleur de Sel and Forchetta both maintain their One MICHELIN Star rating, bringing the total number of 1-Star restaurants in Taichung to four. Meanwhile, JL Studio maintains its distinction as the only restaurant in Taichung with Two MICHELIN Stars.

READ MORE: The First Day We Got Our Stars: Jimmy Lim of JL Studio 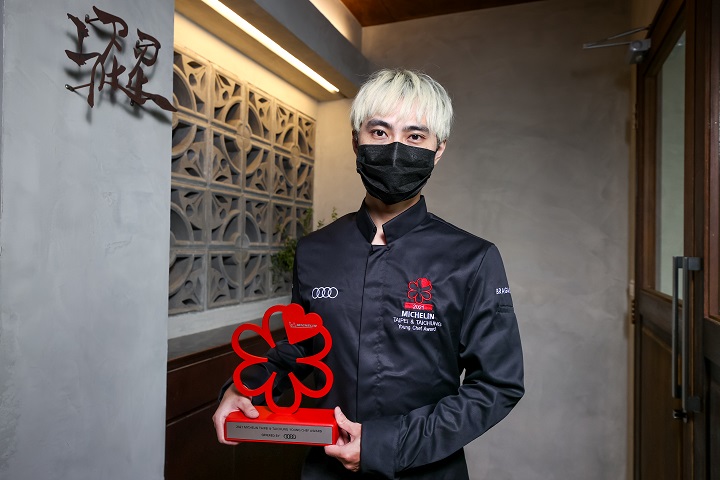 Chef Yi Hua LIN 林佾華 of Sur in Taichung is the winner of this year’s MICHELIN Young Chef Award.

Chef Yi Hua LIN 林佾華 of Sur in Taichung is the winner of this year’s MICHELIN Young Chef Award. Born in 1991, he graduated from a professional culinary university in Taiwan and shows an expert hand in designing a menu that reinterprets local culinary habits in each season. Weaving his own personal daily and childhood experiences, he uses commonly and locally sourced ingredients to both embody and reinterpret the Taiwanese culinary culture. 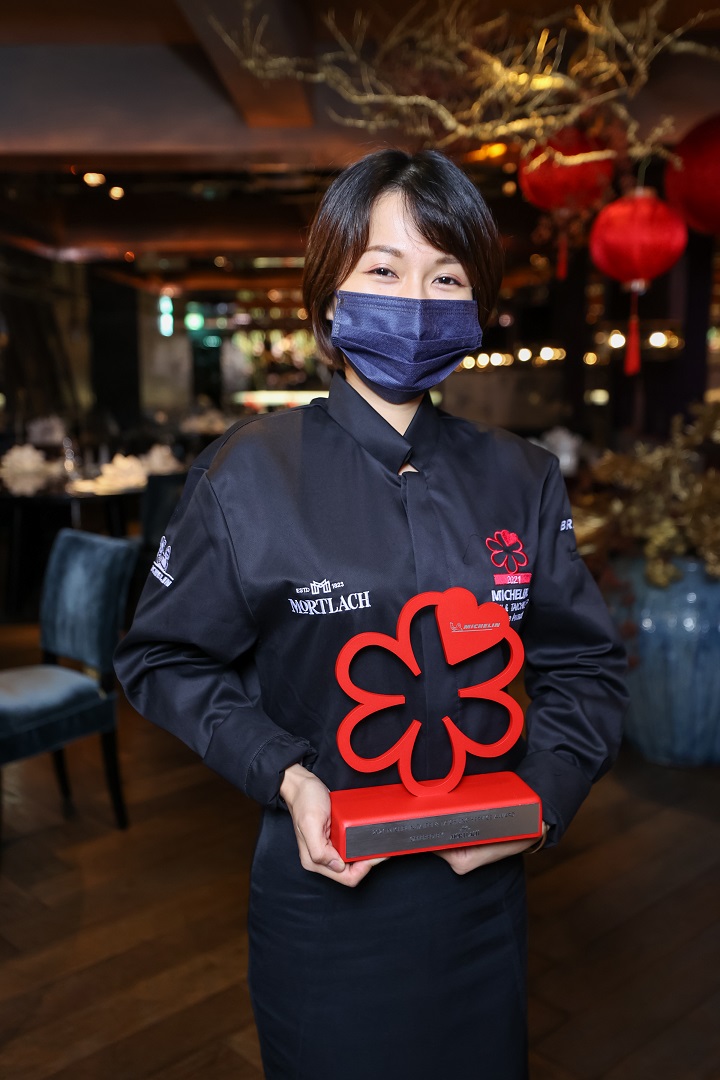 The MICHELIN Guide Taipei & Taichung 2021 also includes a new MICHELIN Service Award, which aims to highlight a skillful and talented professional within the industry. This year’s winner is Jennifer, Wan Chen Ou 歐宛臻 of Le Palais in Taipei (pictured on the right).

With almost 10 years’ experience in Le Palais, she is passionate and enthusiastic in her work and is devoted to providing impeccable service to guests with a professional, thoughtful attitude and smile, which makes the whole dining service memorable. 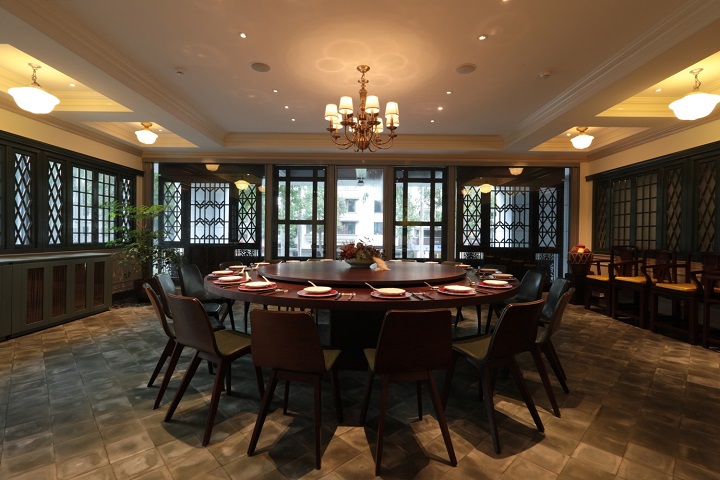 The 1-Star Taipei restaurant Mountain and Sea House, where “farm-to-table” is the restaurant’s core concept, was awarded the MICHELIN Green Star this year.

The MICHELIN Green Star is awarded to restaurants in the MICHELIN Guide selections, which are at the forefront when it comes to commendable practices in sustainability. These restaurants propose to their customers gourmet experiences that combine both gastronomic and eco-friendly excellence, and are a source of inspiration for all food lovers and the whole industry.

In Mountain and Sea House, “farm-to-table” is the restaurant’s core concept. Its acumen revolves around the belief that heirloom local produce is the key to making delicious dishes. In addition to growing vegetables organically, the high-quality meat and seafood served are obtained only from farmers and fishermen who practice sustainable production methods.

Yangming Spring (Shilin) believes that vegetarianism is a culinary practice as well as a lifestyle to respect the environment. The restaurant applies a “cherish food” philosophy and practices sustainable habits such as recycling to reduce the amount of waste. They also hope to further promote this concept through publishing books, organizing talks, and running a concept retail shop.

READ MORE: What is a MICHELIN Green Star?

Two weeks ago, the MICHELIN Guide Taipei Taichung 2021 also announced its annual Bib Gourmand selection. A total of 91 restaurants in Taipei and Taichung were highlighted for providing a value-for-money gourmet experience. In Taipei and Taichung, this means that guests can enjoy three high-quality dishes (excluding drinks) for less than 1,000 Taiwan dollars. 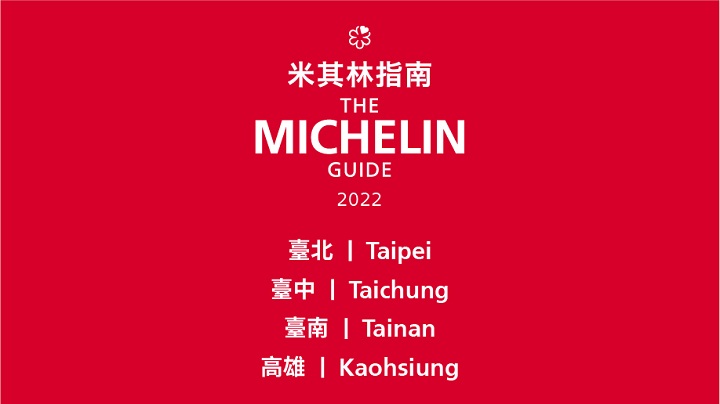 In 2022, the MICHELIN Guide will be expanded to Tainan and Kaohsiung.

MICHELIN also announced today that the guidebook selection will be expanded to include the cities of Tainan and Kaohsiung in the 2022 edition. Known as a city of culture, Tainan is famous for offering a plethora of small bites and seafood dishes. Simple shops and street vendors run by third and fourth generation owners often draw long queues with their local delicacies.
International port and industrial city Kaohsiung, on the other hand, is a popular gastronomic destination for chefs and investors and offers a diversity of cuisines. The city is particularly well known for its animal husbandry, so dishes made with lamb and beef form the backbone of its culinary traditions.

READ MORE: The MICHELIN Guide Extends to Tainan and Kaohsiung in 2022
The full selection of the MICHELIN Guide Taipei & Taichung 2021, including its Starred restaurant selection, was announced online via a digital ceremony on August 25, 2021. Watch the replay.