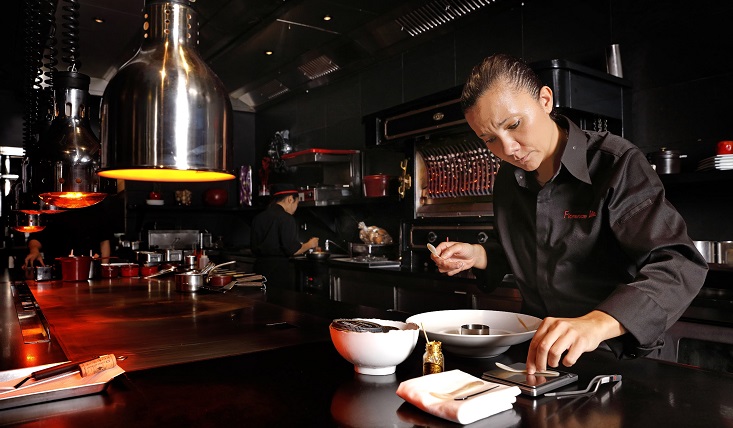 Subsequently, she left the group and furthered her career in Shanghai, where she served as chef de cuisine at top French restaurants such as Sofitel Shanghai Sheshan Oriental, Laris Shanghai and New Heights Shanghai for six years. The most memorable experience in Shanghai and her greatest challenge, she shares, was managing a team of over 40 chefs at New Heights. But it was there as well that she fell in love with the dynamism of Asia. 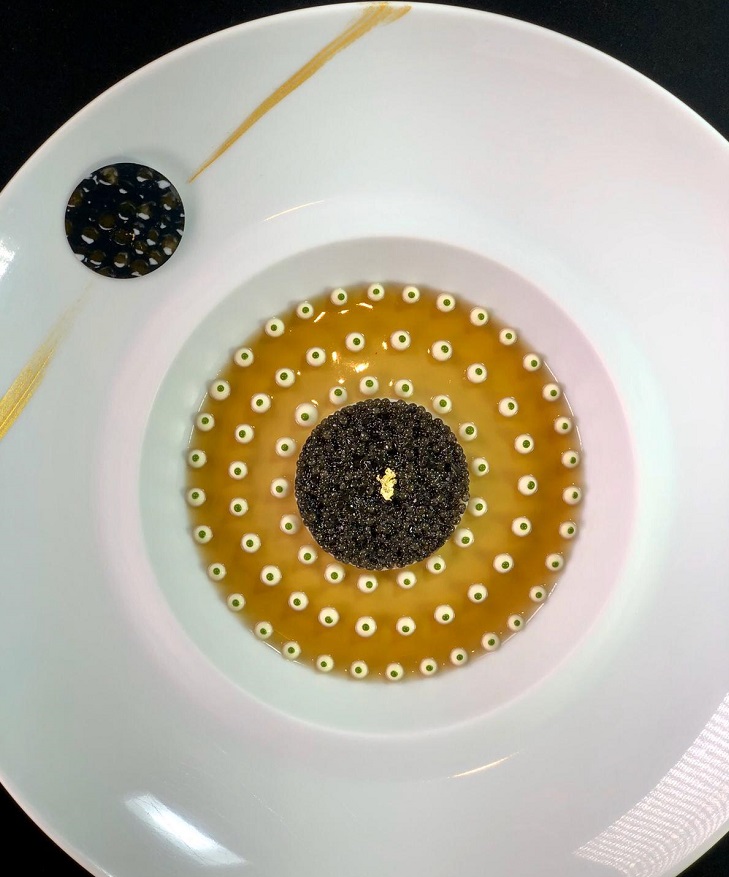 It was only natural for Dalia then, to join Mandarin Oriental Taipei’s Cafe Un Deux Trois as its chef de cuisine, where she continued serving modern French classics in Asia. She worked at Hong Kong’s two-MICHELIN-starred Amber at Landmark Mandarin Oriental as sous chef to Richard Ekkebus for three years before finally returning to Taipei’s L'Atelier de Joël Robuchon.

“I wanted to return to the kitchen. I was sous chef at Amber and Cafe Un Deux Trois and if I wanted to return to the kitchen, it had to be the best kitchen, in terms of culinary fundamentals, such as the style of cuisine, the ingredients and sauces and the flavours presented in the plate. When L'Atelier de Joël Robuchon Taipei approached me to be their next chef de cuisine, I thought: ‘this is it’,” she recalls.

2019 marked the 10th Anniversary of L'Atelier de Joël Robuchon Taipei and in November, a group of top chefs from the Robuchon group, including Eric Bouchenoire, who heads research and development; Philippe Braun and Tomonori Danzaki, the group’s Chef Conseil; and François Benot, Chef Patissier Conseil from Joël Robuchon International France, teamed up for Robuchon Week in Taipei.

Having inherited the legendary chef’s legacy, Dalia believes that the fundamentals of Robuchon's creations lie in premium ingredients, adept techniques and the eternal pursuit of true flavours, rather than following the trend. “Diners will never get tired of classic flavours. There might be a time for adventure and novelties but there’s nothing like a well-executed classic French dish.” She says.

Before coming to Taipei, Dalia decided to take a two-month break, returning to Burgundy to spend time with her family before embarking on an adventure across seven South-American countries. She took apprenticeships in famous restaurants in the region during her trip and experimented with local ingredients and techniques. “The schedule was tight, but it was great,” she shares. When asked about her favourite part of working in the kitchen, she replies: “There is no fixed routine, and new challenges await every day. Whether it is the ingredients or the techniques, there are always new things to learn.” 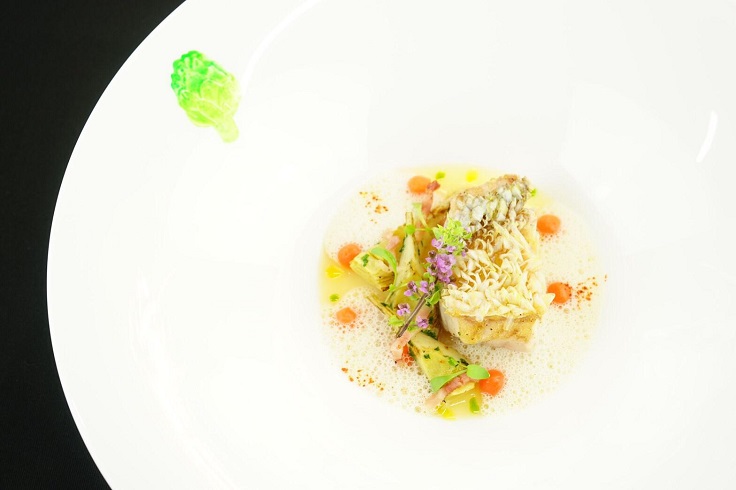 During her 14 years in Asia, Dalia has accumulated a wealth of experience and has an outstanding portfolio, from working in top kitchens across Hong Kong, Shanghai and Taipei. We invited her to share her thoughts on returning to Taipei and her observations on the fast-growing Asian dining scene.

How do you feel being back in Taipei after three years? What were some of the biggest changes for you?

I am, of course, extremely happy to be back, I love Taiwan. It is a great opportunity and a great challenge at the same time for me to be chef de cuisine of L'Atelier de Joël Robuchon Taipei. Time flies and I still remember when I debuted at the kitchen of Joël Robuchon Monte-Carlo 14 years ago and subsequently L'Atelier de Joël Robuchon Hong Kong. Now that I’m back, I hope I have improved in terms of techniques, knowledge and management skills, compared to when I first started.

One of the biggest changes that I've observed is that many young talents are now helming kitchens here in Taipei. Furthermore, there was no MICHELIN Guide three years ago. The guide definitely has brought pressure for chefs and at the same time, a sense achievement when you get selected.

What do you love about Taiwan? What was the first thing you did when you came back?

Taipei is very peaceful and people here are friendly. I want to enjoy my time here and gain a deeper understanding of the local produce this time round. And of course, I aspire to meet the expectations of our restaurant’s patrons and myself in this new role.

When I came back, I visited my chef friends and tried new restaurants which opened during the three years I was away, such as Chefs Club by Aisha Ibrahim and Samantha Beaird, as well as MICHELIN Plate restaurant, nkṵ.

I had long discussions with my sous chef to understand the operations protocol in the kitchen, our key suppliers and prices of ingredients. I've started preparing new menus as well. It is a pity that I haven't got the chance to visit the local markets. I will definitely pay a visit to the market and meet our producers after this busy period. 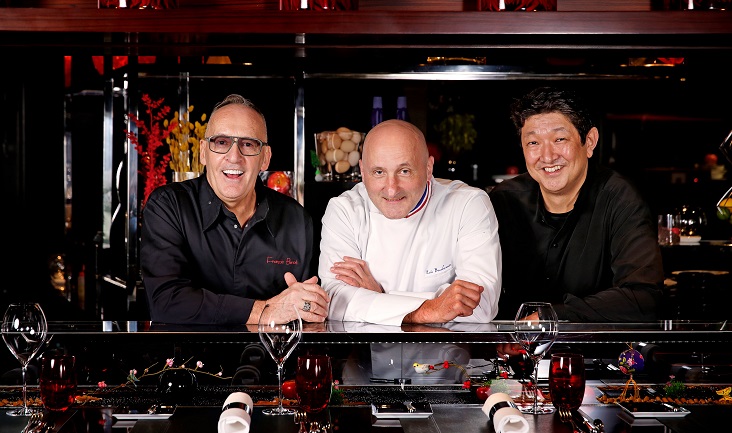 Since 2006, you've spent 14 years in Asia, including fast-growing food capitals such as Hong Kong, Shanghai and Taipei. What are the biggest changes you’ve observed in the region?

As an industry, we are very concerned about climate change, and many industry leaders have been actively participating in environmental conferences. I believe that we should constantly re-examine our everyday dining habits. In recent years, more chefs have started to look at the diversity of local produce rather than relying on imports.

Meanwhile, I’ve seen more foreign chefs coming to Asia, especially French chefs, for instance, at the one-MICHELIN-starred Lameloise in Shanghai and Le Comptoir de Pierre Gagnaire. This is a positive change, as competition will significantly improve the standard here, bringing more diversity and choice to the Asian dining scene in terms of produce, technique and culinary styles.

What is unique about working as a female chef in the kitchen?

I am happy to be in charge of an L’Atelier under the Robuchon group. I might not be the only female chef in the group, but I was extremely touched when I received messages from my fellow female chefs saying that I am their inspiration and benchmark. I am glad to have achieved one of my initial resolutions, which is to inspire the younger generation of chefs.

Everybody is equal in the kitchen in the sense that we all play our parts and perform our best to satisfy our guests.

2019 marks the 10th anniversary of L'Atelier de Joël Robuchon Taipei. With many new restaurants sprouting up during the past 10 years, what makes L'Atelier stand out amongst the rest? What are your goals and plans for the restaurant?

I am glad to be back. To me, the fundamentals of Robuchon's creations lie in premium ingredients, adept techniques and the eternal pursuit of true flavours, rather than following the trends. Diners will never get tired of classic flavours. There might be a time for adventure and novelties but there’s nothing like a well-executed classic French dish. My plan is to lead my team and motivate myself to do the best and work hard towards our next milestone.

This article was written by Hsieh Ming-ling and translated by Tang Jie. To read the original story, click here.