There are exciting new names and old favourites alike in the star selection of the MICHELIN Guide Hong Kong Macau 2020 guide unveiled on 17 December. In its 12th edition this year, the guide awarded three stars to 10 restaurants in Hong Kong and Macau, two stars to 19 restaurants and one star to 61 restaurants.

Of the total of 90 MICHELIN-starred establishments, 16 restaurants received new stars this year. The numerous star additions in the MICHELIN Guide Hong Kong Macau 2020 are testament to the high level of talent in the two cities, and their creativity and passion for gastronomy, MICHELIN Guides International Director Gwendal Poullennec told the audience at the MICHELIN Guide Star Revelation and Gala Dinner.

The MICHELIN Guide’s stable of inspectors — all full-time employees of the Michelin Group — paid for their independent and anonymous restaurant visits across Hong Kong and Macau and made their selection according to the same five criteria used by MICHELIN inspectors around the world:

Here are some excerpts of what our inspectors have to say about Hong Kong and Macau’s 16 new starred restaurants:

Forum, Hong Kong
Promoted
The iconic dish here, Ah Yat braised abalone, has become as famous as Forum’s owner-chef after whom it is named. Indeed, its international fame is such that some even travel from abroad just to taste it – tender and flavoursome abalone slow-cooked in a gourmet broth for days. Try also the braised oxtail, crispy fried chicken and stuffed crab shell with dried scallops. The dining room is spacious and comfortable.

Sushi Shikon, Hong Kong
New
The famous sushi-ya moved to this prestigious address in 2019 and had the best Japanese designers and artisans pitching in on every detail, including the karatsu dinnerware. But one thing hasn’t changed: the long-standing executive chef Kakinuma still leads the same team to deliver the best food with the best skills. The signature Shimane abalone is steamed in sake for seven hours and served with an abalone liver sauce made with a secret recipe. 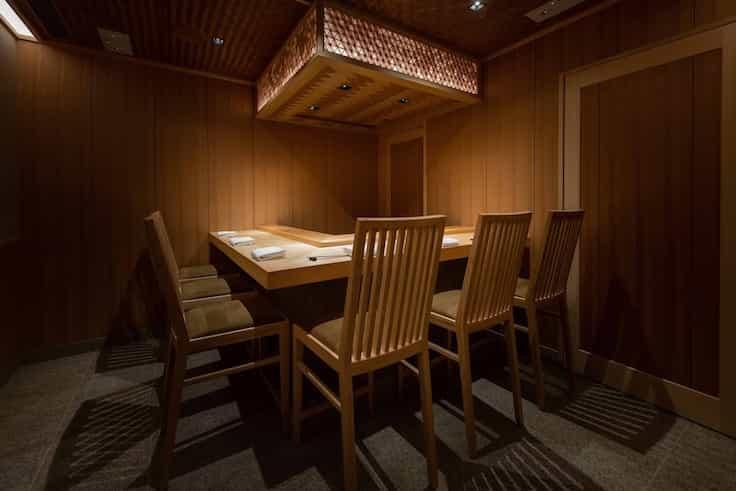 Arbor, Hong Kong
Promoted
Its calming Mediterranean colours make this something of an oasis from the bustle of Central. The experienced chef hails from Finland; he uses mostly French techniques in his cooking and sources quality ingredients, mainly from Japan. His sophisticated dishes exhibit typical Nordic precision and deliver intense natural flavours. The service style is quite formal and there’s an impressive wine list.

Sichuan Moon, Macau
New
Supervised by celebrity chef André Chiang, Sichuan Moon is the total package – theatrical décor, detailed service, and creative cooking. The Malaysian head chef subverts all pre-conceptions about Sichuanese food with his 15-course tasting menu that never fails to surprise. The exquisite appetiser platter and Ma Po tofu in a bay leaf basket qualify as works of art. Hot and sour soup assembled at the table is as spectacular as it is tasty. 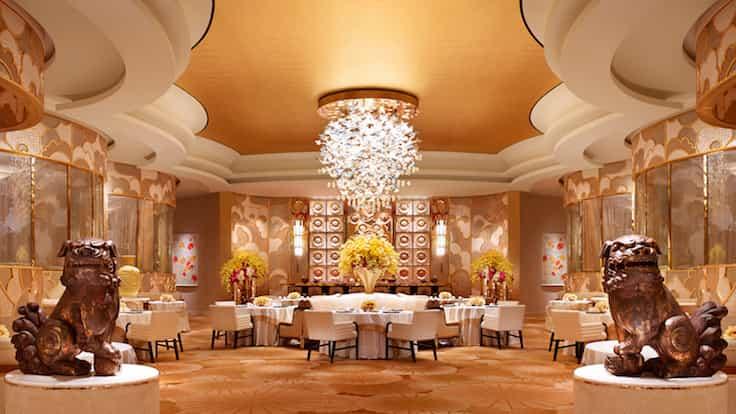 New One MICHELIN Star Restaurants – What Our Inspectors Said

Aaharn, Hong Kong
New
The bright yellow walls and contemporary art may not say much about the historic police armoury building Aaharn occupies, but its name cannot be more revealing – it means “food” in Thai. The Australian chef David Thompson oversees the operation and his short but very sweet menu changes seasonally to feature the best ingredients from Thailand. Don’t miss their desserts, such as the Thai cupcakes – and on balmy nights ask for a table on the terrace.

Fook Lam Moon (Wan Chai), Hong Kong
Promoted
Thanks to 70 years of glorious history, Fook Lam Moon is held dear by its faithful regulars as an institution in classic Cantonese cuisine. Thanks to a stable kitchen team, the food has always been consistently good. Seasonal ingredients – including live seafood that is shipped daily – are cooked in traditional ways. Standouts such as deep-fried crispy chicken, baked stuffed crab shell, and gourmet soup in whole winter melon, are true delights.

Gaddi's, Hong Kong
Promoted
This grand restaurant opened in 1953 and now occupies what was once The Peninsula’s ballroom – it even has its own dedicated entrance on Nathan Road. The well-versed team looks after the guests so well here you may find yourself loathed to leave. Top quality European and Japanese produce are well prepared in a modern French style. Classics such as dover sole meunière are not to be missed. For those wanting something a little different book the Chef’s Table in the kitchen. 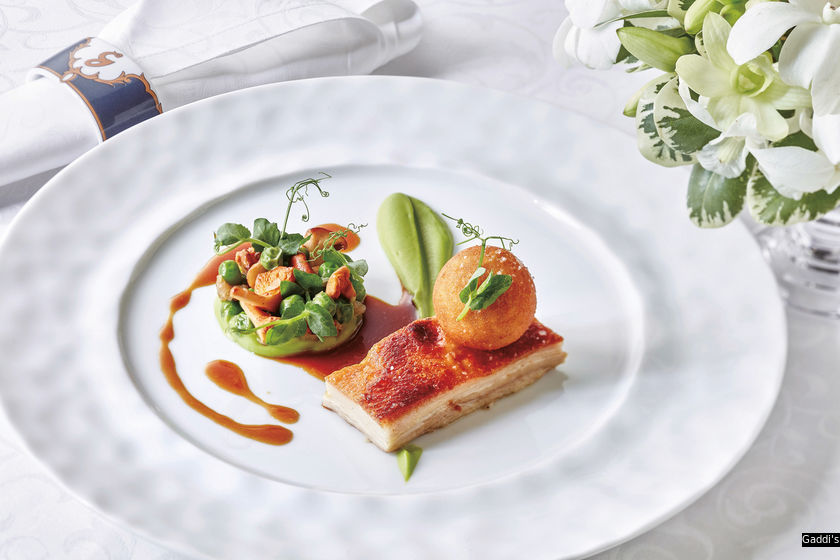 L'Envol, Hong Kong
New
Managed by Chef Olivier Elzer, who once worked with celebrity chefs Gagnaire and Robuchon, this restaurant comes elegantly furnished in light-coloured marble and wood. The food is meticulously prepared and presented in a modern aesthetic. Signatures include tomato salad with smoked mozzarella ice cream, and Burgundy snails with pastis and mushrooms. The interesting wine list with 100 different champagnes complements the fine cheese selection.

Liu Yuan Pavilion, Hong Kong
Promoted
Authentic Shanghainese specialities served in a room where you’ll hear plenty of Shanghainese speakers really will make you think you’re in Shanghai. You shouldn’t miss the stir-fried shrimps, braised meatballs with vegetables and braised pig knuckle. The braised abalone with pork belly is worth pre-ordering. The renovation in 2018 gave the restaurant a look of understated elegance; the booths are the prized seats. 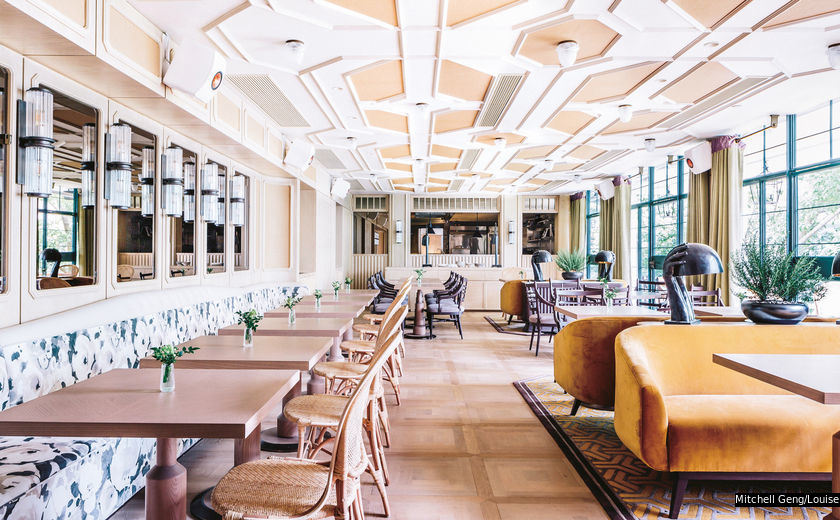 Petrus, Hong Kong
Promoted
Heavy drapes at the windows, thick carpets and elegantly laid tables give this restaurant the look of a grand Parisian salon – but here you also get fabulous harbour views. The French cooking, however, shows a certain modernity; the menu is ingredient-led with the luxury ingredients coming from as far as France or sometimes no further than Hong Kong Island. The wine cellar is notable too and includes 45 vintages of Château Pétrus dating back to 1928.

Roganic, Hong Kong
New
A sister establishment to its namesake in London, Roganic is the brainchild of British chef Simon Rogan. The low-ceilinged room is spacious, with plants on the shelves and fridges to grow micro-herbs. The chefs make seemingly simple dishes that burst with flavours and amazing textures, a nod to their philosophy and ethos. The lunch menu offers great value, while the 6- and 9-course tasting menus come with choices of mains and dessert.

Rùn, Hong Kong
New
Chef Hung has worked in many 5-star hotel restaurants and values food quality and shrewd techniques more than anything else. Seasonal ingredients from around the world are painstakingly prepared the traditional way and then plated with modern refinement. Alongside classic Cantonese fare, vegan and non-gluten set menus take care of different dietary needs. Ask the wine and tea sommeliers for their advice; be sure to try their custom-brewed floral tea. 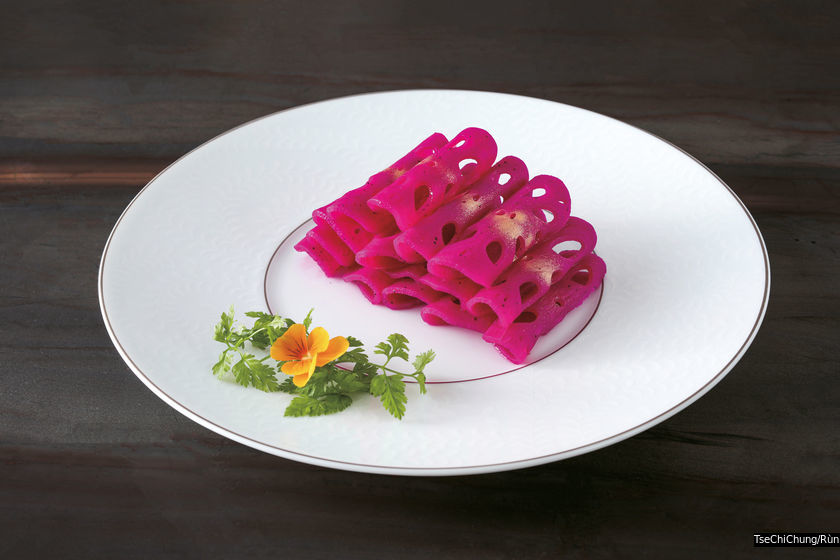 Ryota Kappou Modern, Hong Kong
New
Floor-to-ceiling windows let in natural light and allow expansive views, while designer furniture and artisan tableware exude style. Only seasonal kappo-style set menus are offered. Donabe, hot pot for one cooked à la minute, features only ingredients in season. The chef’s favourite Omi Wagyu Katsu with black truffle and egg confit was inspired by sukiyaki and its flavours are in perfect harmony. Ask for the counter seats to see the kitchen in action.

Zest by Konishi, Hong Kong
New
With a name that embodies freshness and seasonality, this restaurant extends across two levels, with a bar and reception on the upper, and soothing and intimate dining room on the lower. The colour scheme is soft and muted, juxtaposing neutrals with occasional popping hues. Featuring mostly Japanese and some French ingredients, the prix-fixe menu changes every fortnight, usually with both seafood and meat as the main course.

Hong Kong plant-based Vegetarian
All articles of Dining Out