When I arrived early in the morning at Russian River Brewing Company, the line for the pub already stretched as far as I could see down 4th Street in downtown Santa Rosa. It was the annual release of Pliny the Younger, the pub’s triple IPA. (In 2017, the Younger release saw visitors from 40 different countries.) It’s released once a year and is only available to enjoy in the pub.

Russian River Brewing Company has become one of the most famous brew pubs in the country. Originally opened by Korbel in 1997, it was purchased in 2003 by husband-and-wife team Vinnie and Natalie Cilurzo, who opened the Santa Rosa location in 2004. It’s known for aggressively hopped California ales, Belgian styles and barrel-aged beers, with quirky names like Supplication, Rejection and STS Pils (named after Sonoma County’s airport).

While Natalie briefed the staff on what was going to be a very busy day, I spoke with Vinnie to learn more about the art of brewing beer, the role of hops and any up-and-coming projects at the brewery. 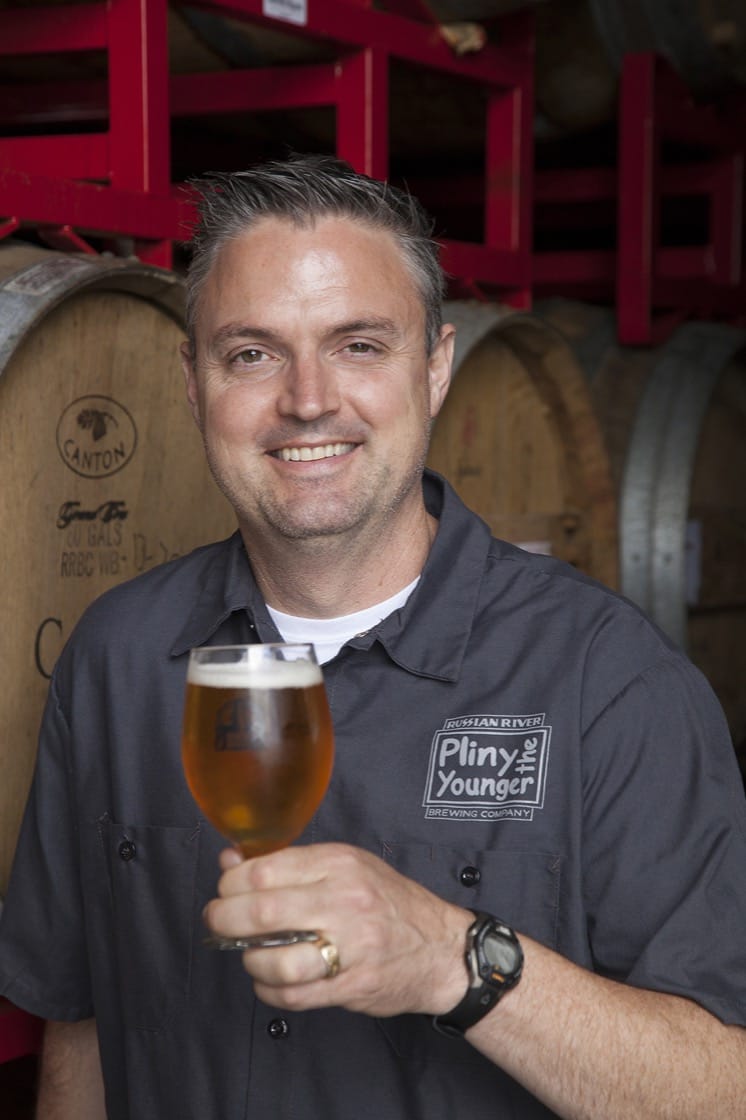 Although he grew up in a winemaking family—his father planted the first vineyard in Temecula Valley in 1968—Vinnie Cilurzo was destined to make beer. He started homebrewing when he was in college. “Almost immediately I knew I wanted to brew professionally,” he tells me over a flight of samples. “IPA was my first interest. It was a big flavor and a distinctive style. At the time there were no American IPAs. It was a style that really interested me, but I wanted to put an American twist on it by using American hops.” Vinnie made a double IPA at his first brewery, Blind Pig, in the mid-1990s. “Looking back, it’s considered the first double IPA made in America.”

Beer is one of the oldest alcoholic beverages in the world, and is made from water, starch, yeast and hops. Unlike grapes, which already contain plenty of fermentable sugar, the starch from grains must be converted into sugar before fermentation can begin. The grains (usually barley) are soaked in water to promote germination, which produces enzymes that break down the starch into fermentable sugar. It’s then roasted to arrest germination and ground to create malt, which is then fermented into beer. Hops, a type of flower, gives beer its characteristic bitterness and acts as an antiseptic.

Although the raw ingredients for beer are simple, the list of beers available at Russian River’s pub is long, with almost 20 selections and new brews being added all the time. So how, I ask Vinnie, do brewers create so many different styles of beer from so few basic ingredients?

“You have the flexibility to make so many flavors of beer because there are so many variations of malt and hops and they all impart different flavors,” he explained. “The same barley can be used to make 20 different types of malt with varying colors and flavors.” The same is true for hops. There are many different breeds, which all impart different characteristics—sort of like different types of grapes in winemaking. “Hops grown in the US are a lot more forward in flavor and aroma than European hops,” Vinnie said. “About 95% of our hops comes from the US, and you get different flavors from different breeds of hops. Some give citrus notes, floral notes and woody qualities. Others give more fruity character. English hops are more earthy and herbal, while German hops can impart a certain grassiness.” 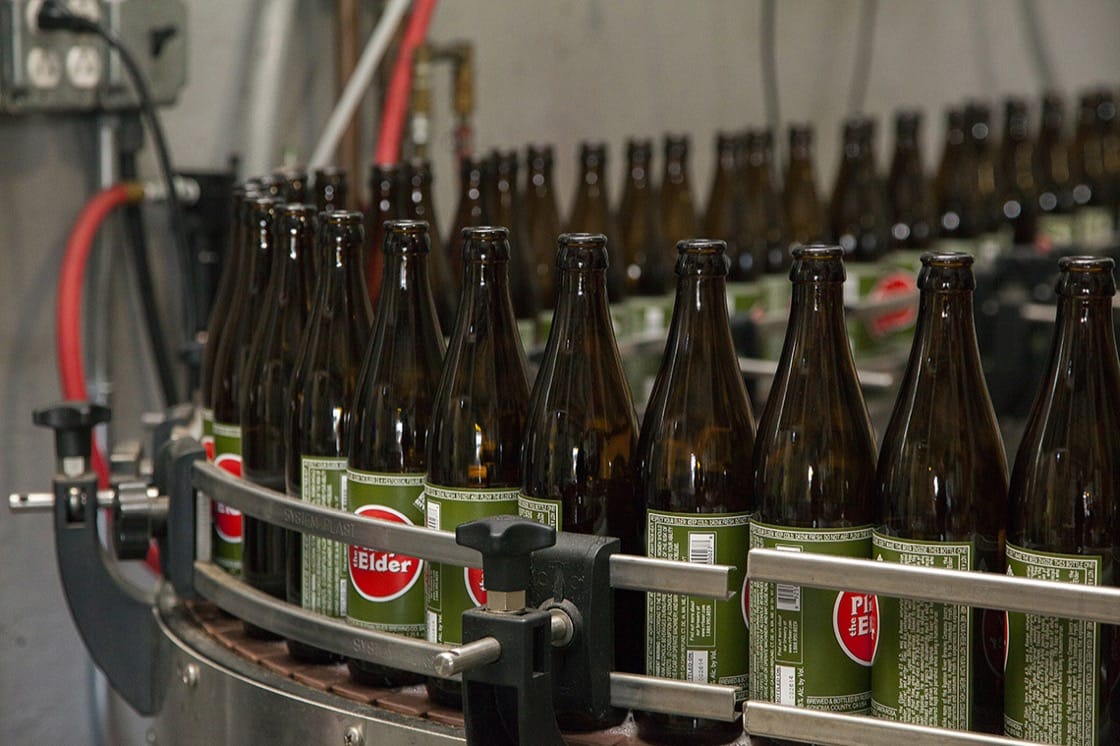 A fan of Lambic beers, Vinnie became interested in the roles of yeast and bacteria in beermaking and began experimenting with barrel-aged sour beers. “I wanted to work with my favorite component of Lambic beers—those funky, earthy, leathery notes,” he explains. “In 1997 I had two wine barrels and I put a blonde ale in them and pitched them with some brettanomyces. I kept making barrel-aged beers and began incorporating bacteria: lactobacillus, pediococcus, brettanomyces. The flavors were good and unique and it was challenging—there were no books at the time on how to use brettanomyces in beer.”

Vinnie pours a sample of Sancitifcation for me to try, his 100% brettanomyces-fermented beer. Contrary to what a wine-lover might expect of something fermented with the brettanomyces yeast (the culprit of barnyard, horse sweat and manure notes in some wines), this was fruity, spicy and refreshing with just a hint of pleasant funkiness underneath. “When brettanomyces are used in the primary fermentation, it’s incredible how neutral the resulting beer is. It doesn’t taste like brett, because the yeast has been given a healthy environment in which to ferment the beer,” Vinnie explains. “It’s only in bottle that you really capture those bretty flavors.”

“There is a lot the beer industry can learn from the wine industry,” he continues. “We bottle condition our sour beers with saccharomyces, the winemaking yeast, because it’s more tolerant of the higher alcohol and acidity of those beers. That’s how we get natural carbonation in the bottle.” Vinnie also regularly uses barrels from local wineries. “We’re fortunate to be in wine country, because we can go directly to winemakers to get barrels instead of having to use a broker. Winemakers can teach us how to take care of barrels, like how to fix a barrel with a leak, or what kinds of flavors aren’t fixable in a barrel—acetic acid, for example. If one of your barrels develops volatile acidity, you may as well throw it out.” 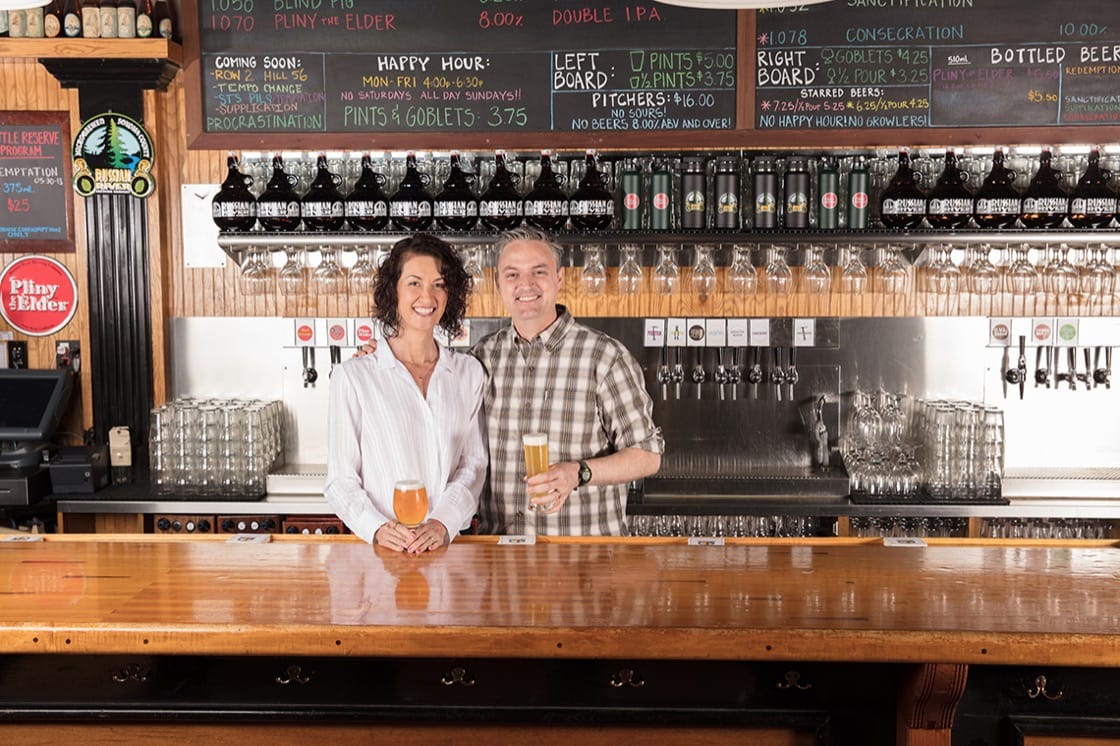 Vinnie and Natalie are particularly forthcoming about their methods and recipes. “Our mentor was Ken Grossman, the founder of Sierra Nevada Brewing Co. He always had a giving, open approach. Now we’re 20-plus year veterans of the industry and we try to do the same and give back where we can,” he says. “For example, think about sour, funky beers. If someone has a bad barrel-aged beer, they may never have another one. We need to be an open book for the industry because this affects us as much as it affects other breweries.”

The popularity of barrel-aged beers is on the rise and super-hoppy brews continue to be in high demand. “Consumers can’t get enough IPA right now,” Vinnie said. “It’s hard to be in the beer industry and not make one IPA or several.” Although Russian River Brewing Company has seen huge success with its Pliny the Elder double IPA and Pliny the Younger triple IPA, Vinnie continues to experiment constantly with new brews. “We don’t want to rest on our laurels with Pliny. We always run the business with that paranoid sense that we need to continue to make new beers, whatever they may be.”

With the Santa Rosa location running at capacity, the couple have broken ground on a new facility in Windsor that will allow them to increase production and continue experimenting, which will open later this year. “The new brewery can technically almost quadruple production, but we will only double production over time,” he says. “It will allow us to make more of our beers more regularly and give us the flexibility to continue making our sour barrel-aged beers.” Vinnie and Natalie designed the new state-of-the-art facility themselves, adding touches like fermenters with yeast collectors so they can crop their own yeasts and a coolship, a large open-top fermentation tank which they’ll use to make Lambic-style beers.

“We just got some Petite Sirah barrels and in the future, we plan to create a brew using Merlot barrels,” he says, excitedly. “In the past we made a Pilsner in Sauvignon Blanc barrels, retaining some of the Sauvignon Blanc juice, so that’s something we’ll make again this coming harvest.” He pours a sample of his latest brew, Apical Dominance, a 5.75% alcohol hoppy blonde ale with refreshing citrus and grapefruit flavors. “For Apical, we used 692, an experimental new breed of hops,” he says, smiling. “We’ve been looking at this breed for years and finally someone grew an acre of it.”

Like wine lovers waiting to see how the year’s harvest shapes up, beer lovers can expect great things from Russian River this fall.