The craft brewery movement is a locomotive engine that refuses to slow down. And when it comes to high-content beers, it appears that the sky’s the limit. On a personal level, I’ve had many discussions with family and friends about just how high that ABV number has reached, and the conversation goes in one of two directions, stating they could only drink one or that they would either A.) get a headache or B.) be instantly intoxicated. So why are we pushing the envelope?

The answer is simple: taste. “Brewing is a beautiful mix of both science and art,” states Victory Brewing Company co-founder Bill Covaleski. “It’s for the artist who wants to express himself with flavor and the scientist who wants to push himself to the limit to see what tastes good and what doesn’t. As brewers, we found a curious fascination; high alcohol and low alcohol become very interesting polar ends of experimentation.”
“We produce high ABV beers because they are, all else being constant, the most flavourful,” says Matt Dunn, director of brewing and quality at Southern Tier Brewing Company in Lakewood, New York. “They are bigger, more complex beers, which is definitely one of the driving forces of craft beer in general. There are specific flavour active compounds that tend to be associated with high ABV beers that would not be desirable in lower ABV beers. There are ways to mitigate the production of these compounds in high gravity fermentations using temperature, O2, pitching regimen and pressure manipulations.”

Brewers who have this curious fascination go through experiment after experiment, and countless trials and errors, to get something they love. For their second anniversary celebration, San Diego’s Duck Foot Brewing Company produced a triple IPA entitled Mega Duckzilla. It tops out at almost 9% ABV and was created as something special and unique for Duck Foot fans. “It wasn’t brewed to be a booze-bomb,” says founder Matt Del Vecchio. “It was purposefully crafted to be a balanced beer—incredibly drinkable, yet still complex and flavourful." For Del Vecchio and his team of brewers, the challenge was about finding hop varieties that wouldn't overwhelm the drinker with too much bitterness. "We used Azacca and Galaxy hops, which both bring distinct flavour elements that play well with each other, giving the beer a pineapple nose up front with a citrusy, almost resiny experience on the palate.” 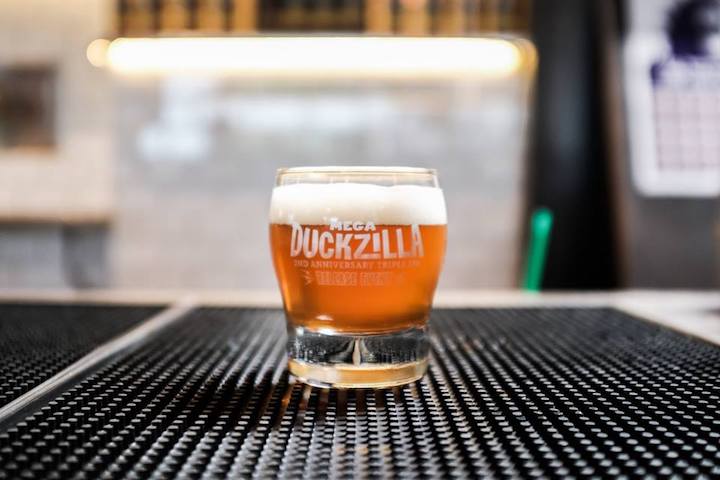 The Mega Duckzilla is a triple IPA entitled that tops out at almost 9% ABV. Image Source: Duck Foot Brewing Company Facebook page.
Barrel-aging is a great method of producing high content beers, though it should be worth noting that it is technically illegal to use any remnants from the barrel to fortify the beer. “Clean barrel-aging—not intentionally wild-fermented or inoculated,” says brewmaster Hollie Stephenson of Highland Brewing Company in Asheville, North Carolina. “The higher alcohol provides the beer with inherent defences and gives it a higher likelihood of coming out of a Bourbon barrel without wild yeast off-flavours or bacterial infection that a low alcohol beer would.”

Southern Tier’s highest ABV beer is their Barrel Series: Manhattan Ale, an American strong ale with 14.1% ABV. Victory produces a 14.3% coffee Bourbon stout—the Java Cask—with flavours of dark chocolate and vanilla, which is released prior to Thanksgiving. “Just before the holiday, we open our brewery and have a beer brunch and do bottle signings,” says Covaleski. “It’s not the strength of the beer that determines the higher profit margin—it’s the uniqueness of the beer and the presentation.” After such great success over the last two years, Java Cask will now be released in 12-ounce bottles this fall.

Though lower ABV session ales are making headway, it doesn’t mean we’ve reached a turning point for higher content beers like double IPAs and barrel-aged stouts and porters. “The trend towards session-able beers and the trend towards high ABV beers is happening simultaneously,” says Dunn. “And that’s what makes craft beer awesome—there’s room for both and everything in between.”

SEE ALSO: Orange Wine, Not Just A Trendy Brunch Tipple
“Both styles will probably always be a little bit of a trend in that the pipeline for them is only so big,” adds Stephenson.

Dunn loves making high ABV beers: “They are challenging from a recipe formulation perspective and in terms of fermentation management. It’s hard to get yeast to complete the last bit of fermentation in a 10%+ ABV beer,” he states. “You need to set them up for success with great yeast health, over pitching and lots of oxygen. I also love drinking high ABV beers for the same reason that most people do: they tend to be the most flavourful and complex beers available. And you can catch a buzz in a hurry!”

“It’s the best — I love them,” says Del Vecchio. “The only reason we create lower ABV beers is so we can downshift every once in a while.”
This article was written by Abbe Baker and first appeared on Robert Parker Wine Advocate in July 2017. Click here for more stories from Wine Journal.

Heading to the Big Apple? Check out these Michelin-recognized restaurants serving up some the best fried chicken in the city.