Wednesday morning, half past eleven. About twenty people have gathered in the minuscule space in front of the open kitchen of the Twins Garden restaurant: waiters and runners, sommeliers, maître d’s, the manager, and, of course, the chefs – thirty-six-year-old twin brothers Ivan and Sergey Berezutsky. The team members have half an hour left before the service to tell each other about the previous day, discuss the guests’ feedback and share ideas, as well as get to know a little bit more about those who have reservations for lunch and dinner, including their allergies, intolerances, preferences, and what brought them to the restaurant.

It’s easier with regulars since waiters already know when to serve gluten-free bread and who should not be offered meat, and sommeliers can prepare bottles of their favourite wine. But with new Twins Garden guests, it’s a lot harder because they do not always realize what kind of place they’re going to. One demanded a salad made according to “his recipe” the other day, another brought steaks from a “butcher he trusts” and tried to send them to the kitchen “to have cook grill them”.

The fine-dining concept is quite new for Russia. Not everyone understands why there is any need for a restaurant if “it’s way better at home” and they “can do the same”, and it’s mostly the waiters and sommeliers who are in the firing line and have to remain sober and manage the image of the restaurant. For example, the waiter listened to the person who wanted a salad made his own way very attentively and then explained how the local Garden salad was made. It turned out that the Garden salad perfectly suited the guest with one tiny exception. The process took a little longer, but the guest – who hadn’t even started to eat yet – already had a feeling that his wishes were fulfilled and that the menu was tailored to his taste. After all, a restaurant like Twins Garden can and should give the guests a little more than they expect. 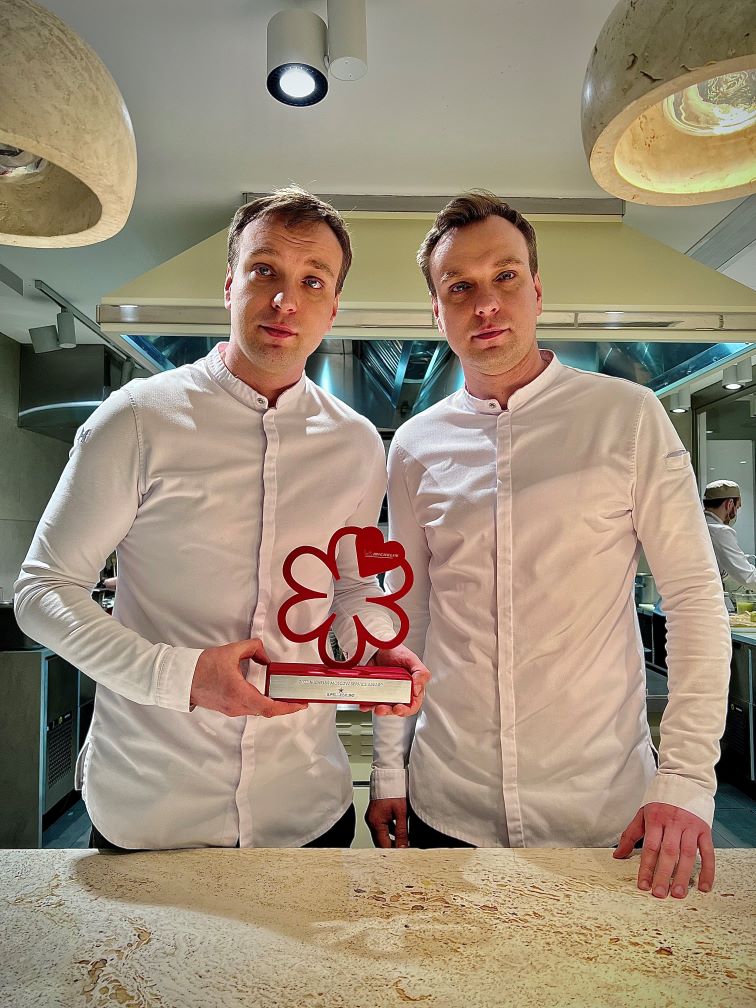 At the daily morning meetings, the waiters may suggest any changes, including those in the menu. Thus, if a reasonable idea to remove some dish from the menu or to change something in the plate service gets a few votes, the Berezutskys will at least take it into consideration. There were many cases when the guests’ wishes communicated through the waiters were accepted and prompted a change. For example, a few accurate comments led to a change of the caviar supplier and total immersion in the process of its production. Now, sturgeon caviar is salted with selected black salt (called “Thursday-made” because traditionally it was blackened in the Russian stove every last Thursday before the Easter Sunday) exclusively for Twins Garden at one of the aqua farms. The reason to reconsider the approach was the guests’ comments delivered by the waiters, with a new bespoke product as a result.

All innovations – products, dishes, and combinations – are primarily tested by those who will have to implement them: waiters, sommeliers, and maitre d’s. Tastings are arranged for them, and their opinion is valued. But there is another side to it. Every waiter, sommelier, and maitre d’ has to know the menu inside out: what products are used, where they came from, how each dish is made, and why it’s done this way and not another. Twins Garden even has exams as if it were not a restaurant but a university where the waiters are future bachelors and even masters (as most of them work here for five or six years) of the fine-dining industry. 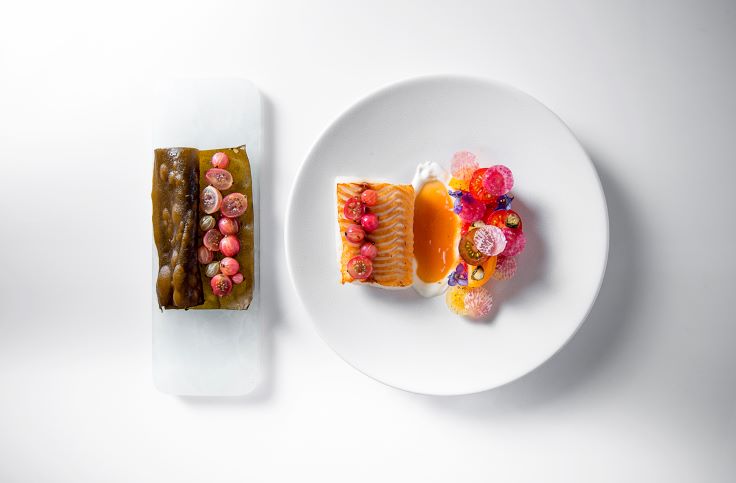 Is there a lot of staff or not enough? Judge for yourself: forty-four seats at tables in the main room and sixteen seats in the “aquarium” in the mezzanine (that’s the room for big groups) are served by nine waiters with three runners to assist, three sommeliers, two maitre d’s, and the manager. All in all, that’s eighteen people per shift for sixty guests, assuming that all seats are taken. Before the drastic reduction of seats in Twins Garden – which happened after the announcement of the MICHELIN Guide coming to Moscow – there were one hundred and ten couverts, and fifteen people served them. The reduction did not lead to firings. On the contrary, more sommeliers and waiters were added to each shift.

By the way, being a sommelier here is not easy. First of all, Twins Garden has the largest wine list in the country with more than a thousand positions, and a sommelier must know literally each of them. Secondly, besides conventional wines, the restaurant offers unique vegetable and mushroom wines invented and produced by the Berezutskys’ team. Thirdly, you can order not one but several kinds of wine pairings: “Round the world” (that is cosmopolitan and not constrained by location), “Travel to the Russia” (the most interesting local wines), vegetable (wines to accompany the Vegetable set-menu and made from vegetables which are produced by the brothers), and “150 years ago”, when you are served wines that are expressly old-fashioned, like they served a century and a half ago (like nice Riesling Kabinett, claret or non modernised Puligny-Montrachet). And then, you need to keep an eye on the wine cellar and replenish it in time. 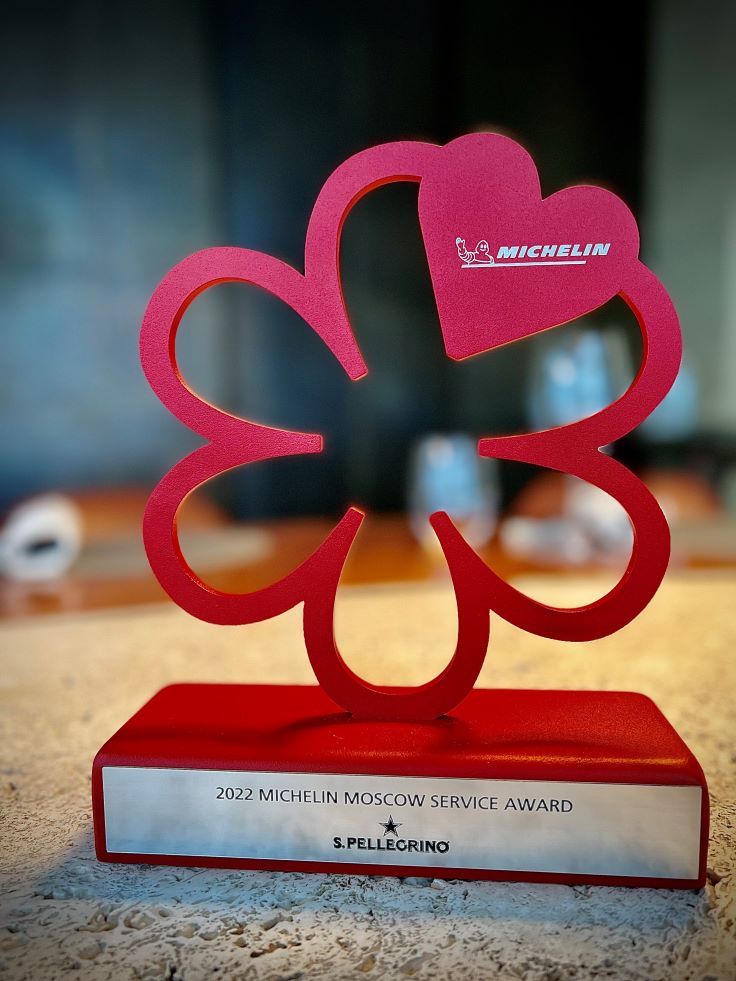 Recently, the restaurant’s sommeliers were searching all over Moscow for bottles of Petrus 2000: their stock had run out, and the guest who usually ordered this Merlot for dinner had a table reservation for next Friday. The wine was found, and this guest indeed asked for it to be served. The Petrus wine had to be bought from fellow restaurateurs so the restaurant earned nothing except for, maybe, karmic points from this, but after all, everything is done for the guest, and the guest got exactly what he had hoped for. For this aspiration and, most importantly, for the ability to give the guests what they expect and even a little more, Twins Garden won the Service Award, the MICHELIN Guide’s Moscow 2022 special prize. There is no going back for the restaurant now since the Guide chose it as an example to follow. And, by the way, some Moscow restaurants now book tables in Twins Garden for their employees: colleagues should learn from each other.

This post is brought to you in partnership with S. PELLEGRINO