Nikita came to Moscow from the small town of Blagodarny in Krasnodar Krai in the south of Russia. He set out to conquer the capital armed with a degree in cooking and confectionery. On his quest, he came across an ad that called for "true Vikings" to work at a new restaurant's kitchen. That was the way the Bjorn restaurant was recruiting personnel. Intrigued by the ad, "the oddest of them all," Nikita submitted his CV. His application was accepted on the second try, and ever since then, his life has been linked to Nordic cuisine and the small restaurant on Pyatnitskaya Street that has brought some Hygge coziness to the Zamoskvorechye neighborhood, the former realm of Russian merchants.

Bjorn was launched in collaboration with the Danish chef Kasper Gaard, who created the menu (the sourdough he imported from Denmark is still used here to bake bread from spelt and wheat flour) and set the restaurant on course for its future growth. Kasper was succeeded by another chef, a Russian native this time. Then, Bjorn dared to stage a rather unorthodox experiment by removing the chef's role altogether; instead, the entire kitchen staff was now contributing to management, and the menu resulted from a joint effort. The experiment lasted for several months, and while it cannot be written off as a failure, at the end of the day, the restaurant's team realized it did need a chef. In 2017, Bjorn's owners took a gamble by offering the position to Nikita, who was merely 22 at the time. But they were probably quite pleased with their hire, as four years later, they got to congratulate Nikita on winning the MICHELIN Guide's Young Chef award. 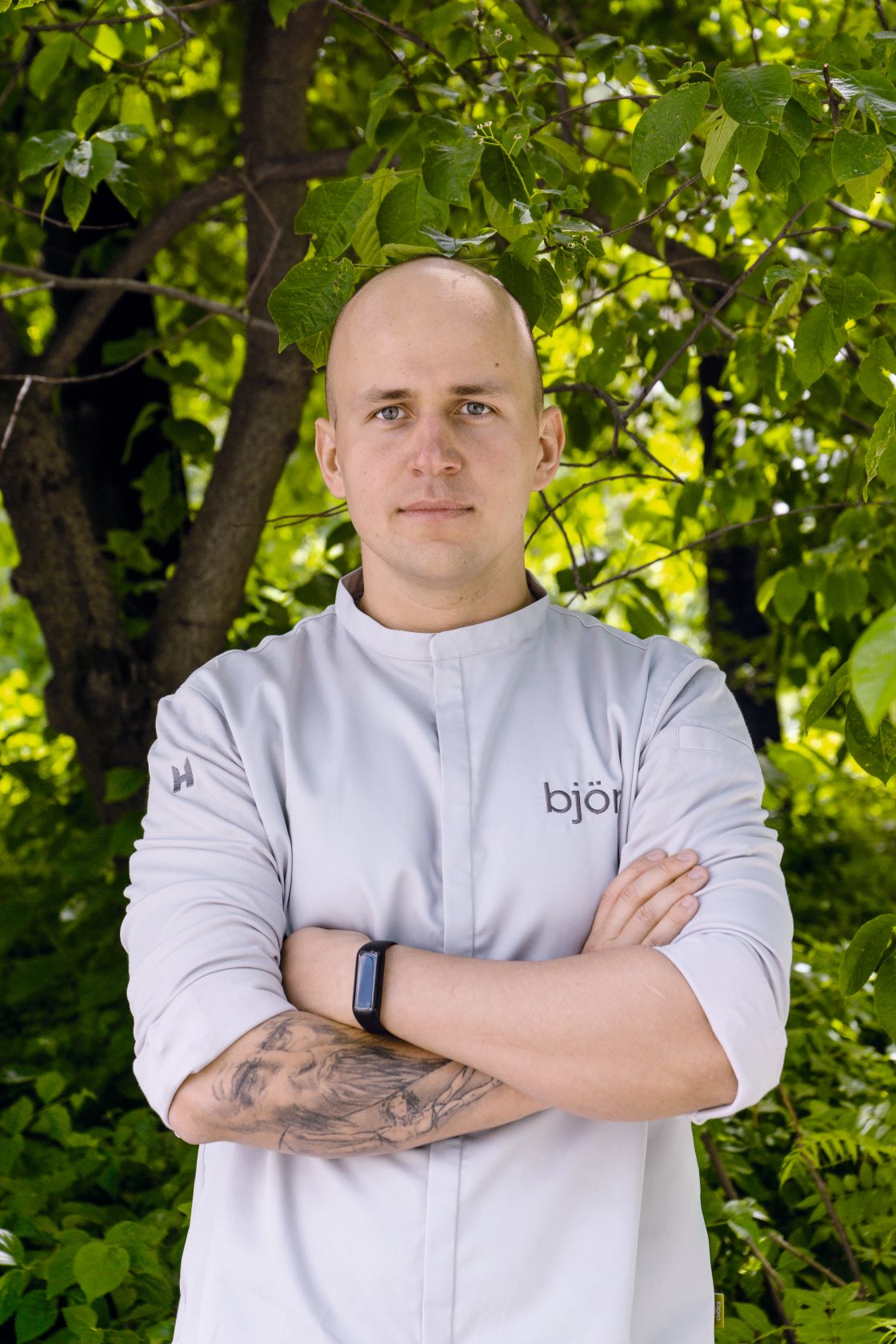 The main takeaway from those few months of democracy was an overall awareness of how important teamwork is. According to Nikita, "the best way to control something is to set up frames where things can develop; the frames themselves need to be dynamic, though. The worst thing of all is when the frames are rigid and no one even remembers where they came from. But if people do understand the backstory behind these frames, any team member can shift them a little, while having a clear vision of what they are doing, why, and to what end." Thanks to this team-centric approach, Bjorn has both waiters and chefs that have been here since day one for an impressive seven years—a track record not very common for Moscow.

When asked to name his most successful dishes over these years, Nikita struggles with an answer. "On the day you change the menu, there still may be something you like. But a couple of weeks later, any and all dishes start vexing you, and you want to tweak the menu again. The restaurant is, in a way, inert, and you can't change things within one day. Which is good, because otherwise, I would have kept making changes everywhere!" he concludes. But even when doing business as usual, Bjorn updates its menu fairly often: about seven or eight times a year, not to mention small seasonal offers with ingredients that are available only for a short time, like wild strawberries or freshly grown nettles. Quite naturally, the dishes are based on typical Nordic produce, from venison, salmon, and herring to root vegetables, different types of cabbage, or northern berries, and the menu has a whole section dedicated to custom smørrebrød set-ups. But this Nordic cuisine comes with a twist, so sometimes you will get served products that are much more common for Russia than Scandinavia, like quince or nutria meat. 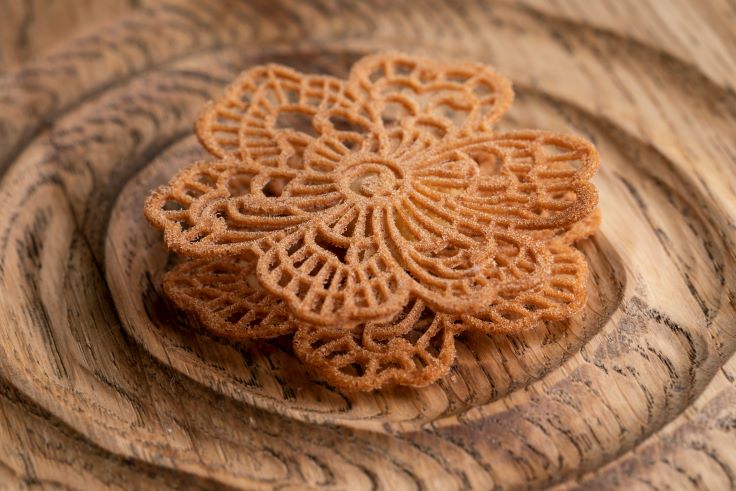 In addition to the menu, the restaurant offers tasting sets. The current set is called Familiar Exotics and uses Russian products to recreate the taste of exotic fruits. Nikita is convinced that it is "entirely possible to split tropical fragrances into separate elements and then mirror these elements by using produce from a different region." Some of these "local" recreations on the Familiar Exotics set include "kiwis" made from green apples, unripe gooseberries, and basil seeds; "mangoes" made from stewed pumpkins, baked apples, anise sage, and juniper oil; "coconuts" from parsnips and pine nut; and even "chocolate" that is actually fermented barley. The tableware for the set was created by master ceramics artists, based on the chef's sketches. 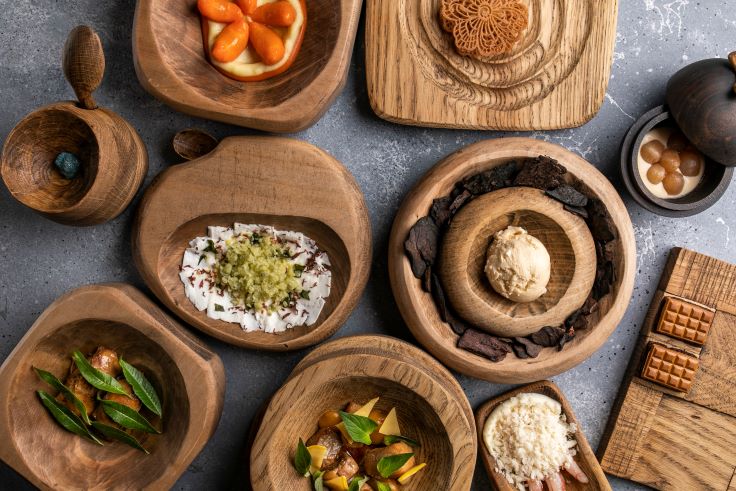 Bjorn adopts an equally thorough approach to its "Wild Dinner" series. These events are essentially field trips for a small number of people (typically, up to 12), with a purpose-designed hyper-seasonal picnic menu, which is served personally by the chef. Each Wild Dinner features a unique new location, like a forest or a riverbank, whose specifics help shape the menu. Generally speaking, Chef Poderyagin actively uses wild herbs in a lot of his cooking and consults with biologists to make sure that only safe-to-eat plants make it into his kitchen. Last year, for example, he researched all species of ferns growing in Russia, so the odds are, we will see them on the menu really soon. 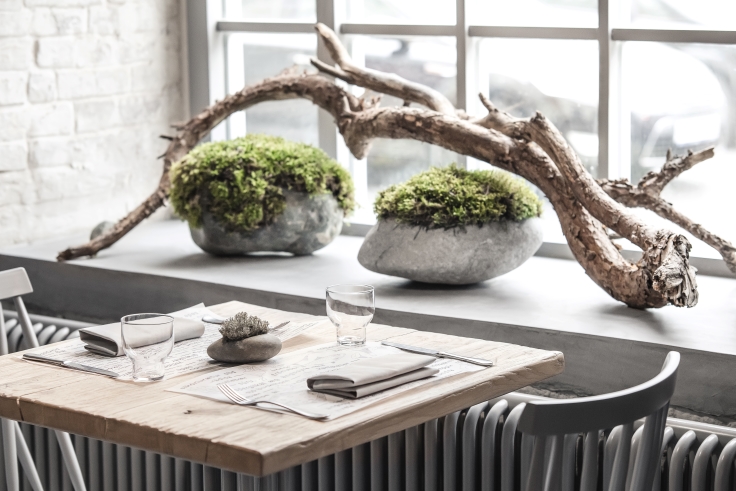 Aside from MICHELIN's Bib Gourmand award, Bjorn has earned a Green Star for its environmental conformity and sustainable development, on which it has put an emphasis since the outset. Energy-efficient lighting and equipment along with water conservation systems were incorporated into the restaurant's design from the get-go. While not all of the relevant services were readily available in Moscow seven years ago, they did emerge by the time Poderyagin took the helm at Bjorn, helping him gradually implement his concept of a restaurant that does almost no damage to the environment. Bjorn's chef genuinely cares about his environmental mission, and that is why today, waste in his kitchen gets sorted into as many as 14 fractions: organic waste is sent off to be turned into compost, while coffee dregs and citrus peels are supplied to skin care manufacturers. In addition, Nikita is dedicated to the zero-waste campaign (it even inspired one of his previous tasting sets) and actively uses those parts of fruits and vegetables that less environmentally conscious chefs would have tossed into the bin.

“A restaurant is only as strong as its weakest employee”

At the age of 26, Nikita Poderyagin has already achieved much more than many other chefs, and judging by the extensive and elaborate plans he has for the further development of his restaurant, he is only just getting started.

The Michelin Green Star is an annual award which highlights restaurants at the forefront of the industry when it comes to their sustainable practices.