A Taste Of Thailand At Art At Curate

The 12th installation of the Art at Curate dining series continues to shine the spotlight on the world’s top female chefs, this time in the form of Bongkoch “Bee” Satongun, chef and co-owner of the lauded Paste Bangkok Thai Restaurant. From 2 to 8 November, she will be joining hands with resident chef Benjamin Halat to present the flavours of long-forgotten Thai classics at CURATE.

Journey through time with Satongun as she presents Paste Bangkok’s most popular dishes like the Wild Seabass With Turmeric, Fennel And “Lon” Sauce, which was inspired by the Sai Yaowapa royal palace cookbook written in 1935. Lon is a traditional coconut-based herb relish that is typically served with raw vegetables like white turmeric, eggplant and wing beans. 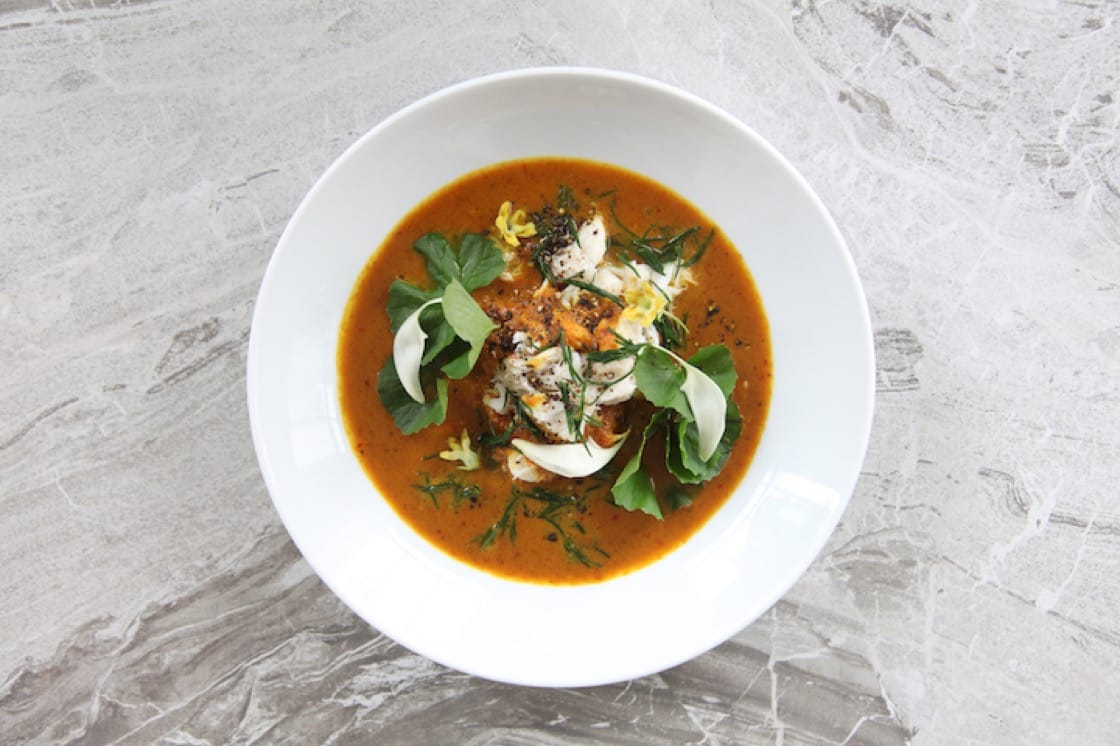 Smoky southern yellow curry of Gulf of Thailand red spanner crab, hummingbird flowers, Thai samphire & turmeric by Paste Bangkok.
“The smells and tastes of Thai food I grew up with are very different from the Thai flavours of today. I find this taste of my childhood through the use of rare ingredients and going back to the basics of Thai cooking. It is only after knowing what traditional Thai cuisine is like can we innovate it,” says the chef. She exercises a firm grasp on the intricacies of Thai cuisine to create a dish of Panang Beef Curry With Toasted Peanuts And Sweet Basil, a play on the well-known Thai curry. 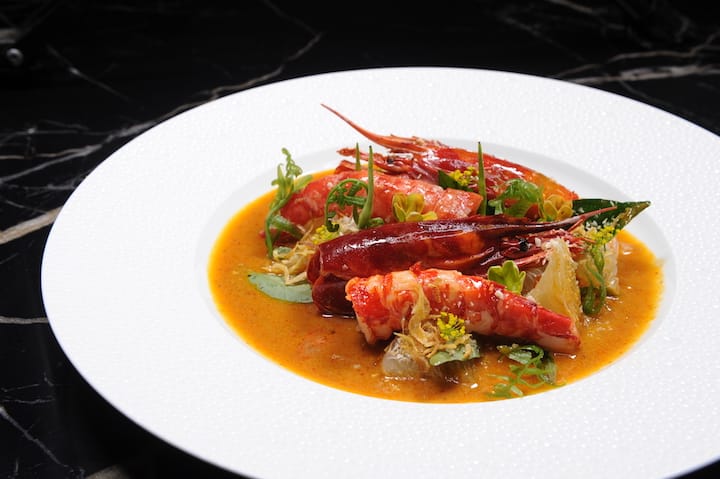 Paste Bangkok's Carabineros Prawn with pomelo, gapi khoei and chilli jam.
In an exciting exchange of cultures, Halat has taken the cue from the visiting chef and incorporated some light and bright touches to his modern German cuisine to complement her elegant Thai cuisine. Highlights include Breton Lobster With Chamomile, Buckwheat And Mandarin, Pork Knuckle With Sauerkraut And Dark Beer, Sanddorn, a palate cleanser of Seabuckthorn sherbet and German gin, and for dessert, Bombe Alaska infused with exotic coconut and kaffir lime flavours. 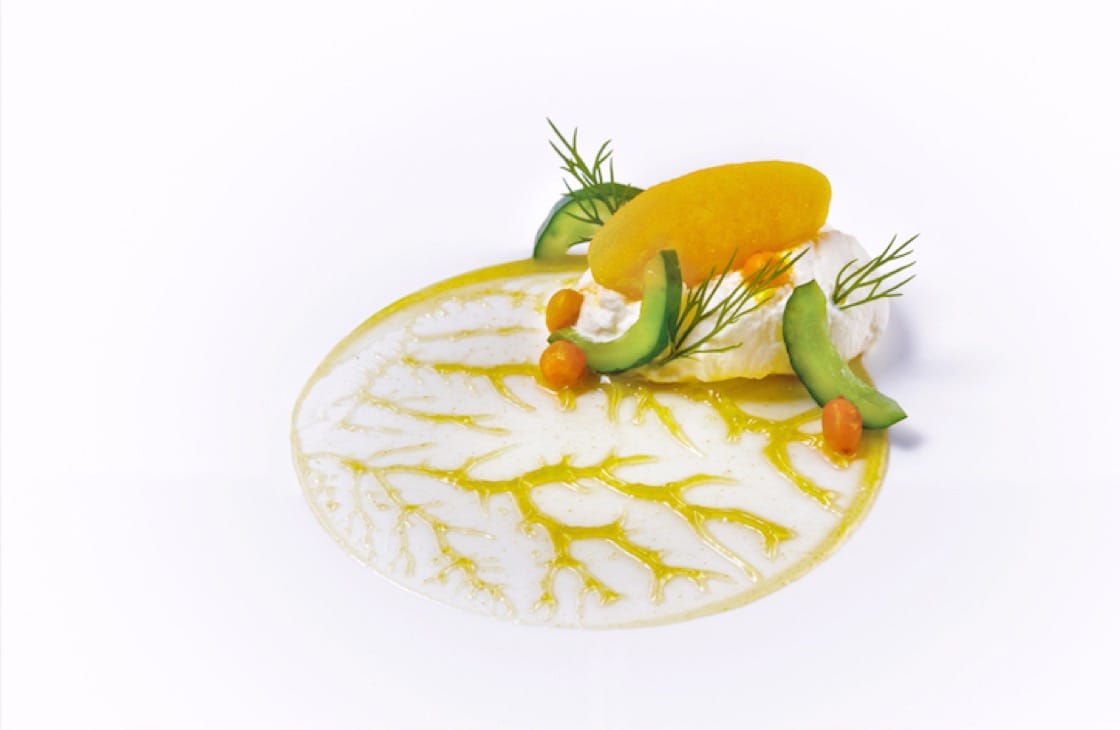 Sanddorn, a palate cleanser of Seabuckthorn sherbet and German Gin, by chef Benjamin Halat.
The menu will be paired with exquisite wines, each highly rated above 90 Robert Parker points. Sip on the 2009 Peay Vineyard Syrah Les Titans, a wine of textural elegance that explodes with generous and radiant red fruit, and the 2010 La Valle Franciacorta Millesimato Naturalis Extra Brut that begins citrusy and tart, leading to the flavours of apricot, exotic fruit, toasted nut and fragrant saffron. 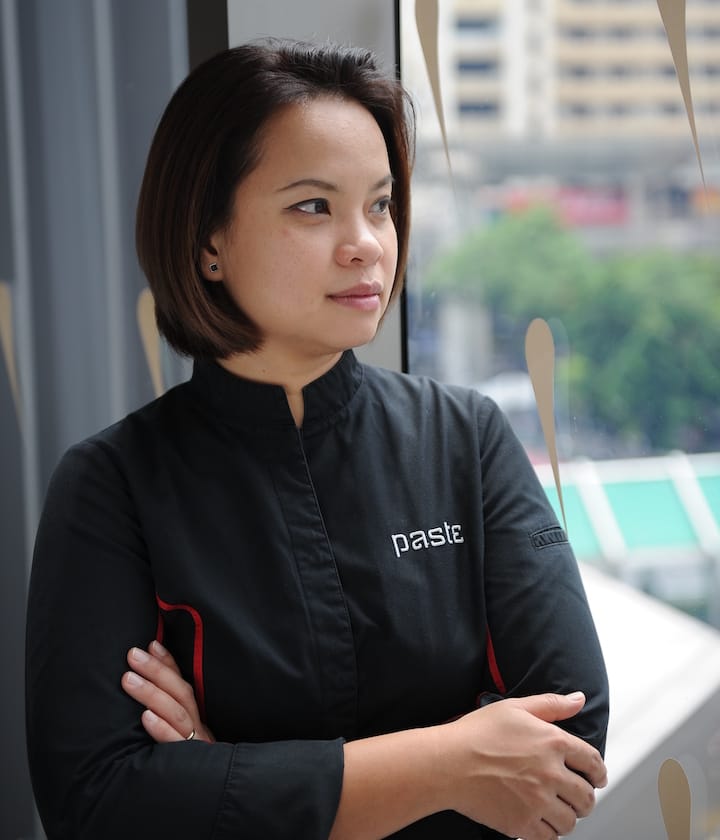 Satongun grew up in her family’s small eatery in Bangkok, helping her mother prepare classic Thai dishes, but didn’t pursue a culinary career till she met and married Australian chef Jason Bailey at the age of 28.

Her husband’s passion for Thai food was infectious and Satongun trained under him to learn to recreate the flavours of her childhood. She has since dedicated her career to exploring and breathing new life into classic Thai cuisine, going so far as to digging deep into historical cookbooks and reviving forgotten recipes.
Together, the couple opened Paste Bangkok in 2015 which quickly gained renown for its “heirloom Thai cuisine” and earned a Michelin star in the inaugural MICHELIN Guide Bangkok 2018.
Art at Curate 12 will be held at CURATE, located at Resorts World Sentosa (The Forum, Level 1) from 2 to 8 November. The four-course lunch is available at $108++ or $158++ with wine pairings, and the eight-course dinner is available at $188++ or $308++ with wine pairings.