We find out more about these talented chefs and discover recipes for two of the dishes they cooked at this exciting event. 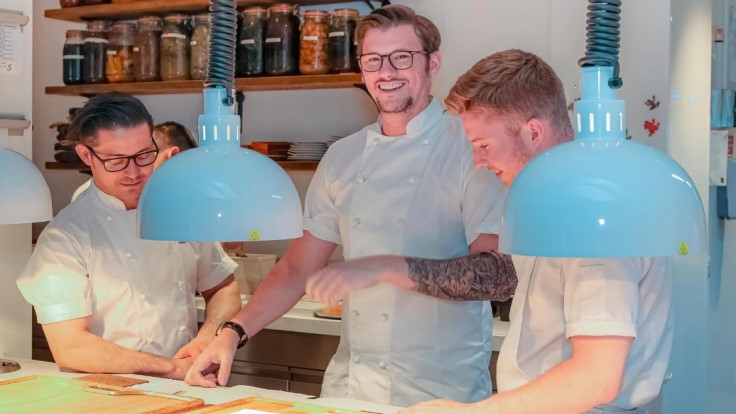 Adam Handling started his career at Gleneagles Hotel in Scotland in 2006, as their first ever apprentice chef. He went on – via roles in London and Newcastle – to become the youngest ever Head Chef at the Fairmont Hotel in St Andrews.

In 2014, Adam took on the role of Head Chef at the eponymous ‘Adam Handling at Caxton’ in St Ermin's Hotel in London, before opening his own restaurant, ‘The Frog E1’ in 2016.

In 2017, Adam opened his flagship restaurant, ‘Frog by Adam Handling’, in London, offering small plates and tasting menus in a casual environment.

In May 2021 he launched ‘The Loch & The Tyne’: a restaurant and pub with bedrooms in the countryside of Old Windsor. In August of the same year he opened ‘Ugly Butterfly’, at the Carbis Bay Estate in St Ives, offering British food inspired by the county of Cornwall.

Passionate about sustainability and great British produce, Adam’s beautifully presented dishes start with the careful sourcing of seasonal ingredients, which he prepares in creative ways to bring out their true flavour.

‘Frog by Adam Handling’ was awarded a Michelin Star in 2022. 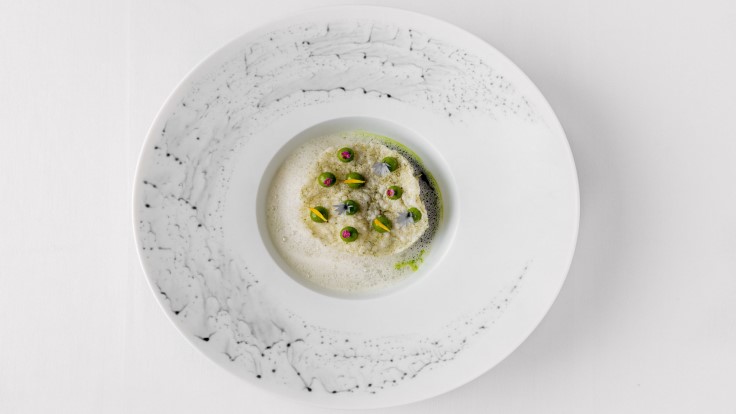 For the cod, brine the cod loin in salted water for 20 minutes. Pat dry and steam for 7 minutes.

For the herb emulsion, blend all ingredients to form an emulsion. Pass through a fine mesh sieve.

For the green grapes, blanche and compress the grapes in equal amounts of dill oil and vinegar. Garnish with brioche discs.

For the celeriac purée, slowly caramelise the celeriac in the butter until deep golden brown. Cover with the cream and apple juice. Bring to a simmer. Purée and pass into a tray over ice. Check seasoning.

For the lemongrass sauce, add the olive oil to a heavy-based pan and put over a medium heat. Add the shallots, garlic, thyme and ginger and cook until translucent. Turn the heat up, add the Noilly Prat and reduce the liquid by half. Pour in the chicken stock and reduce this by a third. Add the cream and bring to the boil. Thinly slice the lemongrass. Remove the sauce from the heat, add the lemongrass and lime leaves and infuse for 20 minutes. Pass the infused sauce through a sieve to ensure a smooth consistency. Add the anzu, and salt to season. On a high heat, reduce the sauce down by a further quarter. Warm in a saucepan and split with chive oil.

For the seaweed cracker, add the tapioca and water to a heavy-based saucepan and bring to the boil. Simmer until the tapioca is cooked through and it releases all the starch, so that the mixture becomes thick. Add the kelp powder and salt and beat vigorously, until the mixture becomes jet black. Spread the mixture, thinly and evenly, across silicon mats. Place into dehydrator at 70°C for 12 hours. Bring a saucepan of vegetable oil up to 220°C and add pieces of the cracker. The cracker should puff up instantly. 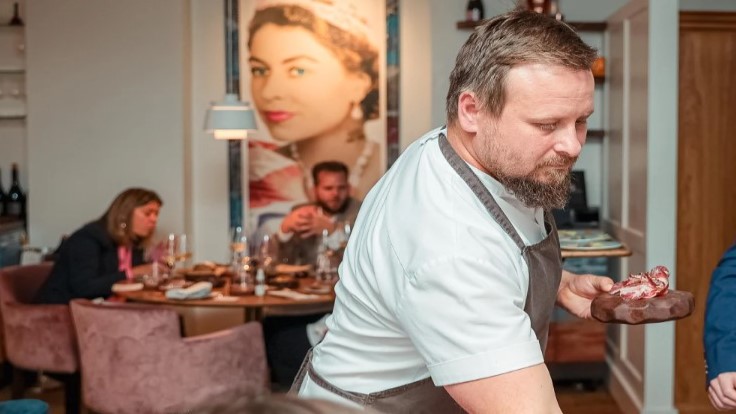 Szilárd Tóth is the chef and co-owner of Salt restaurant in Budapest, a sophisticated spot within a boutique hotel, which was awarded One Michelin Star in 2021.

Szilárd became interested in gastronomy early in childhood. He used to spend a lot of time wandering in nature and was interested in anything edible he could find in the forests and fields. As he grew older, this curiosity only became stronger, and he now forages for all kinds of ingredients with the Salt team.

Szilárd’s cooking is inspired by his birthplace, Szabolcs-Szatmár-Bereg county, and evokes a familial, childhood nostalgia. He believes that Hungarian gastronomy today could not exist without Hungarian traditions. Indeed, many of the dishes on the menu at Salt are updated versions of traditional Hungarian recipes, which use classic ingredient combinations in new ways. 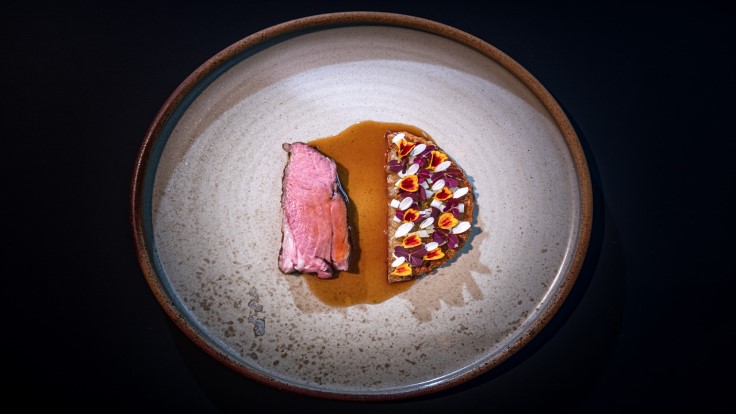 Combine 2 litres of water with the salt and honey to make a marinade. Marinade the rump steaks for 2 hours. Rinse under running water, then pat the meat dry with a clean cloth.
Add the butter to a pan and quickly sear the steak. Be careful not to overcook it. Cook each side on charcoal for another 30 seconds.
Transfer the steak to an oven preheated to 90°C and cook until its internal temperature reaches 56°C. Keep warm until served.

Whip the room-temperature butter and salt in a food processor. Keep whipping while very slowly adding the water to emulsify with the salty butter.
Put the mixture into closed containers and ferment at room temperature for 3-4 weeks.

Mix and bring the ingredients to a boil. Sieve, then leave to firm up. Put the mixture in a Thermomixer to jellify, then transfer to a mixing bowl and remove the air bubbles with a vacuum machine.
Mix with brunoise-cut fresh fennel before serving.

Sauté the onions in melted butter, then add the peeled, grated potatoes.
Cook until tender. Transfer and flatten the mixture on a baking tray and leave to cool.

When cool enough to handle, roll into 100g balls, then flatten the balls into disks with an 8cm circle pan.
Fry the potato disks in a moderately heated pan with rapeseed oil until golden brown, then crisp them up in a salamander broiler.
Cut the disks in half before serving (one half per portion)

Put the crispy half potato cake on a plate then place the fennel gel mixed with the fresh fennel brunoise on top. Garnish with fermented fennel seeds and blackcurrant leaves and finish with edible flowers and seasonal herbs. Finally add the lamb rump steak and the jus. 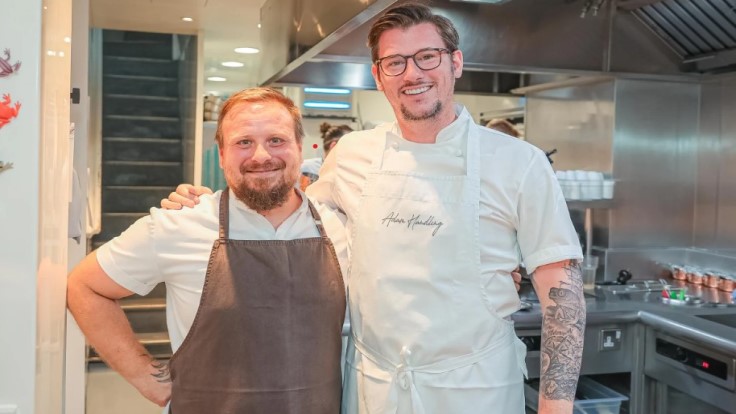 When The Stars Align

Six chefs from the Michelin-starred restaurants of The Ritz-Carlton’s group of hotels shine brightly as they embark on a journey to four Asian cities to collaborate with their peers.

What I Think About My 4-Hands Partner: Chung Yiu Ming & Chan Yung

A Taste Of Thailand At Art At Curate

What I Think About My 4-Hands Partner: Sujatha Asokan & Thi Le