The latest annual restaurant selection of MICHELIN Guide Taipei & Taichung was announced on August 24, including the first-ever expansion of the guidebook’s selections to Taichung. In the highly anticipated selection, four restaurants in the city received MICHELIN stars — with JL Studio, opened by chef Jimmy Lim from Singapore, helming that list with a two-star affirmation.

In addition to JL Studio, Lim also opened a casual spin-off this year Chope Chope Eatery, offering a takes on casual Singaporean "kopitiam" cuisine, which was recognised with a Bib Gourmand in the 2020 guidebook.

READ MORE: These Are The New Bib Gourmand Eateries In The MICHELIN Guide Taipei & Taichung 2020 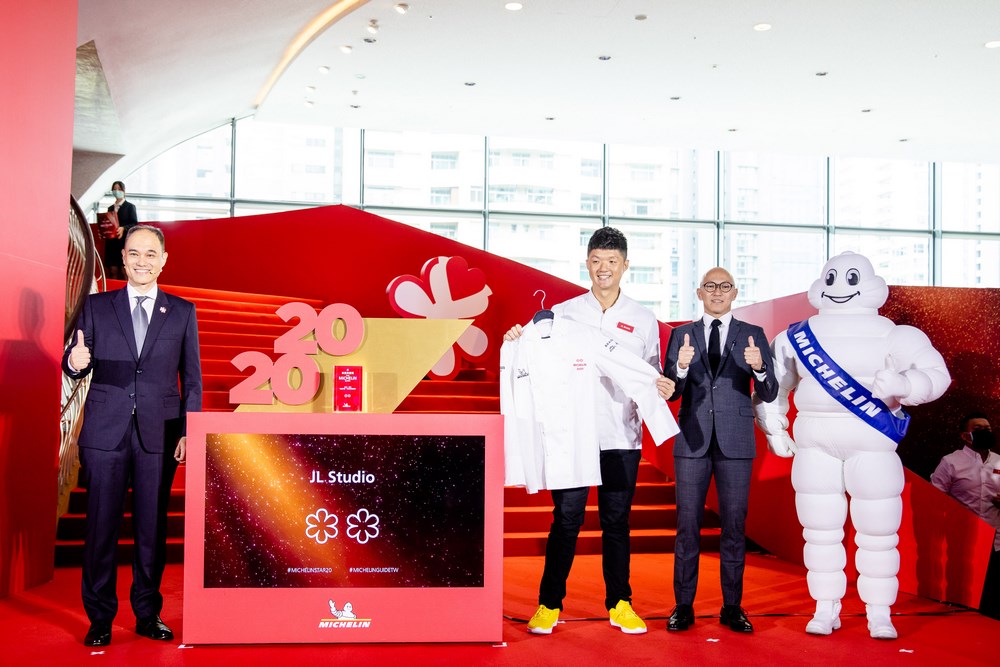 “I didn’t dare to believe it. I was shocked, I really was shocked,” Lim told the MICHELIN Guide in an interview after the press conference when asked how he felt when he heard his name being announced on stage. “I would like to dedicate this award to everyone at JL Studio, past and present. Without their contributions, JL Studio would not be what it is today.”

Growing up in the heat of the kitchen

Born and raised in Singapore, Lim’s father ran a cze char (stir-fry) stall in a Singapore hawker centre, where he turns out familiar flavours such as chilli crab and curry fish. He said that he fell in love with the kitchen at a tender age. “I must have been maybe 7 or 8 years old. My family ran a restaurant, so I was always running around in a kitchen environment. The high heat and hot flames of a restaurant kitchen is something that is very natural for me,” he said.

Kitchen Language: What is Cze Char?

As a teenager, Lim was a member of the Singapore National Youth Basketball Team until a knee injury interrupted his professional sports career. The disruption reignited his passion for cooking and he enrolled in the Singapore Hotel and Tourism Education Centre (SHATEC), and later took home the gold medal when he represented Singapore in the Global Young Chefs Challenge organised by the World Chef Association (WACS). 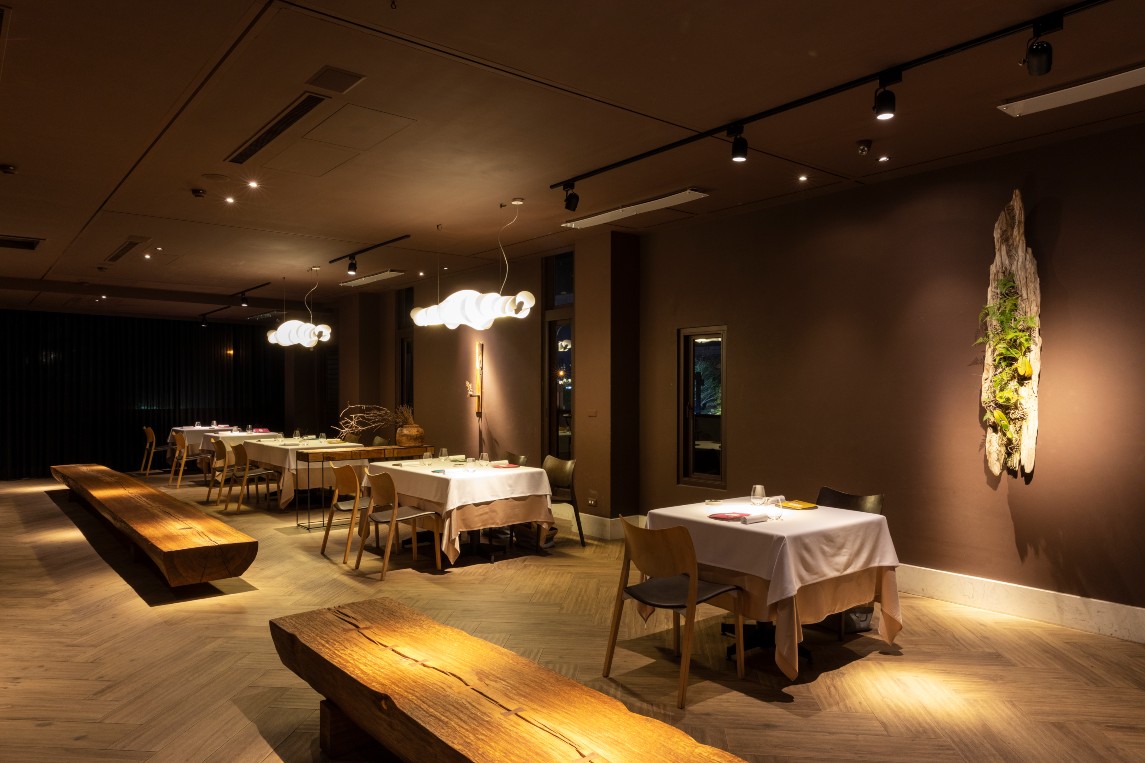 According to Lim, many people were not enthusiastic about his decision to open a Singaporean restaurant in Taichung three years ago. (Photo: JL Studio)

He moved to Taiwan in 2007, where he worked under the tutelage of chef Lanshu Chen at her now-closed French fine-dining restaurant Le Moût until he founded JL Studio in February 2017. During the period, he also completed stages at several acclaimed global restaurants such as three-starred The French Laundry and Per Se in the US, and Denmark’s two-MICHELIN-starred noma.

What sets JL Studio’s cuisine apart is Lim’s drive to use Taiwanese ingredients and modern culinary techniques to re-imagine Singaporean cuisine. “My goal at the moment is to elevate Singapore cuisine, to retain its backbone and keep its structure intact, because it is something that we are losing. However, I use Taiwanese ingredients to make it more interesting, and to translate it into another language so guests who are not from Singapore can get an introduction to Singaporean cuisine,” he explained. 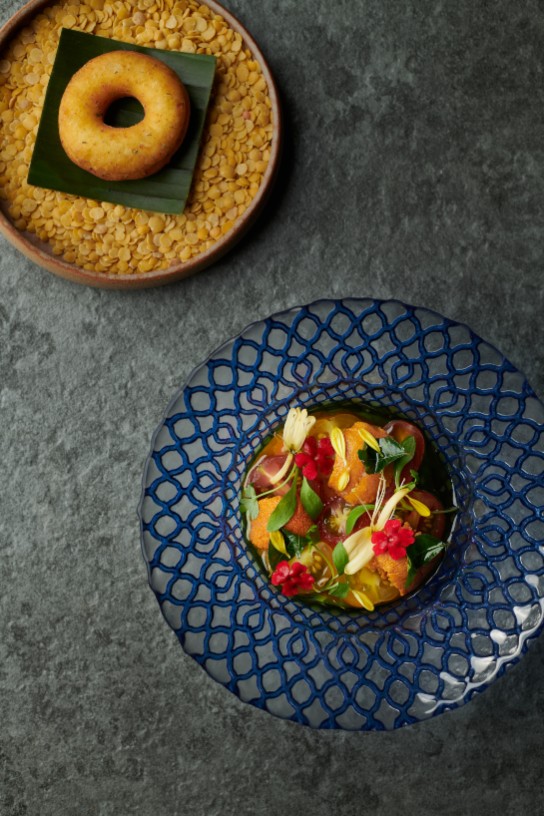 For example, a dish named "Little India" (pictured on the right, provided by JL Studio), on his menu references the vadai, a deep-fried lentil fritter originating from South India and popular in Singapore’s Little India enclave. In Lim’s version, this snack uses a homemade recipe, and then paired with a dipping sauce made with sea urchin, cherry tomatoes, and mozzarella cheese for a fresh new take on both its presentation and taste.

Lim has also playfully re-interpreted Hainanese chicken rice, an emblematic dish of Singapore, many times in different ways. In one instance, he substitutes the chicken with Taiwanese white asparagus that Lim poaches with white bamboo shoots and shredded Chinese pears, and completes it with aromatic chicken oil and warm rice. Despite being chicken-free, his new rendition of Hainanese chicken rice has a taste that remains familiar and comforting.

When he first decided to open a Singaporean restaurant in Taiwan three years ago, not many people were optimistic, according to Lim. But this latest achievement should hopefully set the critics at bay.

We spoke to Lim immediately after the MICHELIN Guide Taipei & Taichung 2020 MICHELIN Star Revelation Ceremony to chat about the joys of receiving a MICHELIN star recognition.

How did you feel when you received the MICHELIN star?
(At the Star Revelation Ceremony) I was feeling very carefree in the beginning but when the results came out, I was very surprised. I didn’t dare to believe it. I was shocked, I really was shocked.

How are you going to celebrate this achievement?
I will go out with my team for a meal in one of the restaurants in our group, and I will properly thank them afterwards.

What are you most thankful for?
I feel that I am very lucky, not because I was born lucky, but because I have been surrounded by many benefactors, and a lot of people who are more capable than me. So I am very thankful and grateful that these people all happen to always be by my side. For this, I am very appreciative.

What is the influence that MICHELIN has had on your career?
It has inspired me to always strive for perfection, always push the boundaries, always make progress everyday, and always push myself.

What is your advice for other chefs who hope to get a MICHELIN star?
I believe you truly have to believe in what you do and then persevere. Put your head down and work hard.

What do you want the world to know about Taiwan’s culinary culture?
I think the advantages that Taiwan has are its ingredients and the enthusiasm of its people. These are things that I often don’t experience in other destinations. Besides coming here to enjoy the cuisine, the warmth of the Taiwanese people and the connection you can get with them is one of the biggest draws.

What inspires you to get out of bed every morning?
To do better each day, which is to say, we must be better than we were yesterday. I always tell my team, your best service is the last service. You have to constantly pursue improvement.

What’s next on the horizon for you?
I am still overwhelmed with emotion. Once everything settles down, my plan is to look for other platforms where I can share more about Singaporean and Southeast Asian cuisine.

This article was originally written in Chinese by Ming Ling Hsieh and translated in English by Debbie Yong. Read the original article here.

The First Day We Got Our Stars: Shigeru Koizumi of Esora

What does it mean to be guided by nature? At newly minted MICHELIN restaurant Esora, chef-owner Shigeru Koizumi answers the question with dishes that embody his fascination for the seasons and abide by his "one-degree" culinary philosophy.