Walk into Guy Savoy’s kitchen in Paris’ sixth arrondissement, located in Quai de Conti, and you will find many pieces of artwork as if in a newly set up art gallery.

First, you are greeted by David Mach’s red-faced Buddha head. In the kitchen, the walls are adorned with many other works. One shows a blue-eyed rooster with a red cockscomb, expressed in the shape of a red hand. The colours and images are visually impactful and arousing to the senses. Further inside, on a length of a wall is a 2m-long canvas artwork of Jean-Pierre Desclozeaux, featuring two chefs and a tuna fish.

In the dining room, artworks abound. In fact, there is one titled "Effervescence"(2015) by Fabrice Hyber hung directly on the ceiling of the restaurant’s Bibliotheque Dining Room. Tables in this restaurant are dressed up for the occasion, showcasing collections from designers like Bruno Moretti, Virginia Mo, Laurent Beyne.

And so when Savoy goes on to explain that cooking is not just about technique and precision, you find yourself subscribing to his logic almost immediately.

He says: “When one has made an effort during training, one would master the technical gestures. But what is important in cooking is to bring your own sensitivity, your heart, to bring out all that makes the uniqueness of each chef. All cooks do not have the same desires or ideas. Their desires and ideas are related to their own sensitivity.”

He stresses: “This is the most important thing. It is the technique everyone can have. For example, when you give 10 plates to 10 different cooks, you are going to have 10 different presentations. Each cook would then act according to his sensitivity or his relationship with aestheticism. Aestheticism is something very personal and that’s what makes the richness of gastronomy all around the planet. Each cook is to have this sensitivity that goes beyond technique to make the dish that will give diners feelings, sensations, pleasure, emotions.”

Savoy goes on to say that the very act of cooking is, to him, a very intimate gesture.

“Cooking is an interference before ingestion. It’s something very strong and very intimate.”

He says: “I count myself lucky to have a mother who cooks very very well, and very quickly. I was touched by the pleasure of eating. When we were young, we did not have any other means of comparison other than the cooking of our mother. In fact, I was quick to realise that her cooking was delicious and has given me immense pleasure in eating. I had the basis of comparison when I had lunch at my schoolmates’ home, that was when I realised that I am really lucky because my mum’s cooking was much better than the other mothers’.

Savoy, who was born in Nevers, France, moved to a town in Isere in Bourgoin-Jallieu, where his father was a gardener and his mother owned a taproom that she later turned into a restaurant. 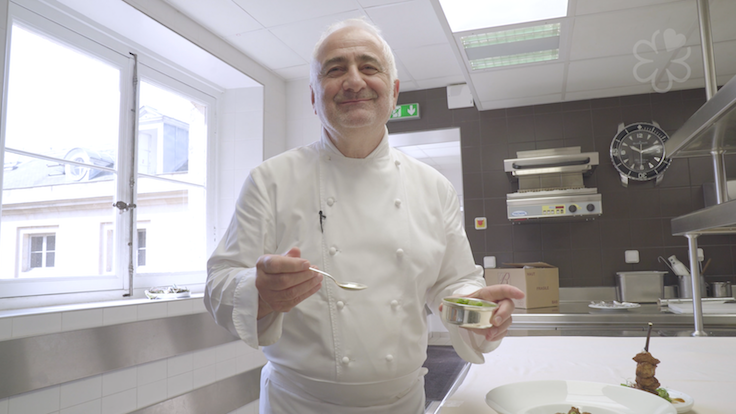 He began his career with three years of apprenticeship under the Troisgros brothers at the famed Troisgros restaurant. He opened his own restaurant in New York, before opening the Guy Savoy in Paris in 1980, which received two MICHELIN stars in 1985.

The defining career moment for Savoy happened when he saw the making of the langue de chat, a simple and common pastry known as Cat’s Tongue.

“Simply put, after mixing salt, sugar, flour, butter and eggs, and after a few minutes of preparation and baking, we have a small biscuit that smells good, that is crispy and delicious. From that day on, I would say, ‘Cooking is magical’. And 50 years later, because it has been 50 years since I started this profession, so 50 years after having tasted this first langue de chat, I am still amazed by the magic of transformation.”

Savoy goes on to explain that the magic of transformation includes cutting, seasoning, cooking and the combination of different products.

“Today, I am even more fascinated by this magic. Good food is magic. You are given a chicken, it is raw and you can't eat it. But 45 minutes later, its skin is golden brown and there is a nice juice at the bottom of the dish, it smells good, the skin is crispy, the meat is tender. You enjoy eating the dish.” 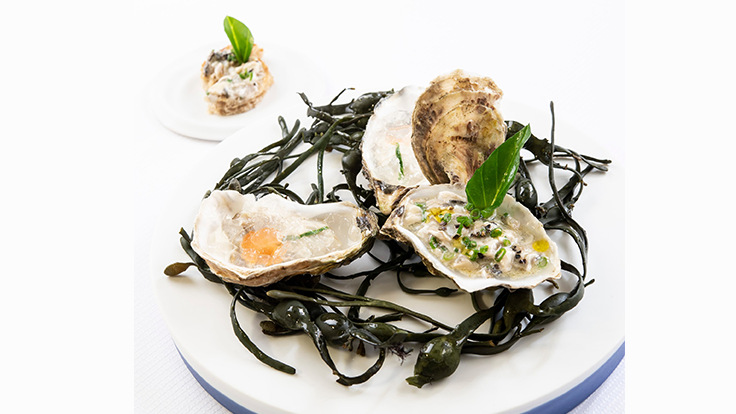 For Savoy, a dish that is visually perfect but lacking in taste due to improper seasoning or incoherence in product combination would not go through the kitchen pass.

“For me, the most important thing is the taste. In principle, the dishes that are well composed would always have an interesting taste. And my DNA remains the same, that is, the respect of the product in its originality, respecting its consistency, the different tastes, this is very important. When I started my job, I wanted to show my technique absolutely. I wanted to know how to do it. Today, I would really have the essence of the product. I want the properties of the products to be displayed in the dish and that this transformation will make the product sublime.”

Take his signature Iced Poached Oysters dish for example. The shell, lined with a lightly creamed puree of oyster has a raw oyster laid on it, this is further covered with a jelly of oyster jus. A strip of sorrel, a touch of pepper and a brunoise of lemon complete the dish. When conceptualising this dish, Savoy had wanted to make a jelly with the water from the oysters to amplify the flavour of the dish. At the same time, remove any “uncomfortable part" could that arise because of the oyster water.

He adds: “Cooking is an ode to life because we work on a product that is from the nature, from the earth and the sea. Our role as a cook is to give these ingredients a second life. This second life in turn will give pleasure to our guests and friends.” 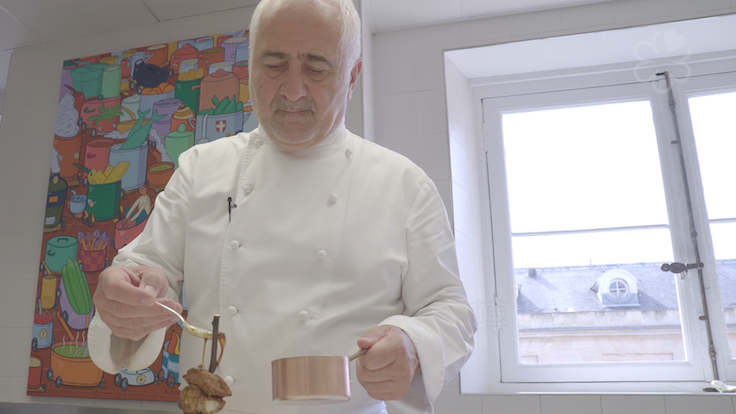 For him, the challenge would always be the next meal.

“The message is very simple. I want the product to be identifiable and I want to bring out its identity, I want to amplify its qualities, I want the guests to remember two or three dishes, of course, and that’s the goal. I do everything for that, I do this for everything so that as a cook, not only am I touched by the recipes but I would also like the guests to feel something on their side.”

So twice a day, he is giving himself the challenge to do his utmost for guests that have come to dine at the restaurant, which has garnered three MICHELIN stars since 2002.

He turns to look at his own MICHELIN guide book collection and recollects the sweet memory of having been awarded the highest accolade.

“I remember how it was like yesterday that I received a phone call on 12 February, it was 10 minutes to 10 o’clock in the morning, the MICHELIN director announced that I have three stars. It’s like an Olympic champion who has won the gold medal. It’s extraordinary! It was, for me, the brightest point that I have felt in my professional life, and in my life.” 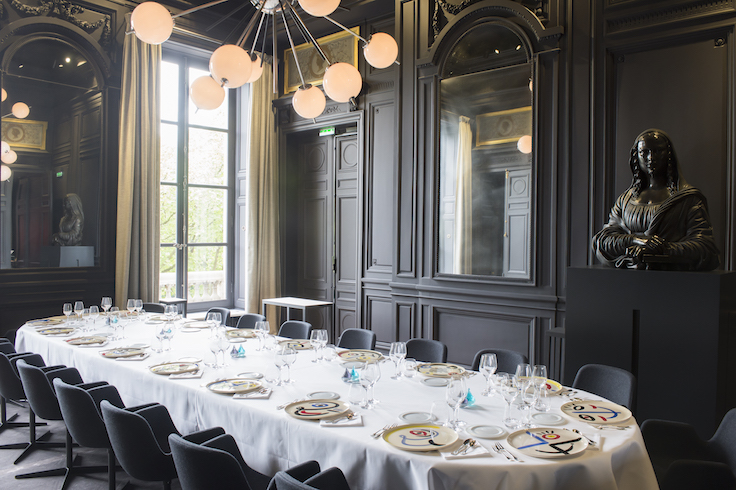 (Pic: Guy Savoy)
But these accolades are not his only measures of success.

“Success, for me, is the opportunity to do my job in the best conditions. Two times a day, at each table and for each guest, I am lucky to be in good health and I am lucky to be nourished by the good feelings that I have in this house. I think my biggest contribution to the gastronomic world is to be myself, to cook what I want, it is to be unique.”

And how does cooking fulfil him as a person?

He says: “The greatest pleasure is to have the opportunity to renew myself two or three times a day, every day of my life. The magic of cooking is so great that if one day you are not feeling good, even if you are sad, just looking at the products makes you want to cook. By being in the kitchen, we are constantly in touch with reality and that’s important. It makes you recover from all the indecent deeds and all the life problems.”