As millions around the world do their part to fight the Covid-19 pandemic by staying home and practising social distancing to slow the spread of the disease, more are picking up their pans and cooking at home before sharing their creations online. Professional chefs, too, are rising to the occasion and doing what they do best — cooking in the time of coronavirus. The top toques of MICHELIN-star restaurants around the world like Eric Ripert, Massimo Bottura and Guy Martin are taking to social media during their restaurant downtime to share recipes and videos from their own home kitchens.

Whether you're a novice just getting started or looking to level up behind the stove, indulge in some feel-good home cooking and find some culinary inspiration here.

A treasure trove of recipes, techniques, tips and tricks from chefs of MICHELIN restaurants around the world are available on the MICHELIN Guide's social media and online websites. Learn to make the traditional Cantonese sweet treat of "smiling" sesame balls from one-MICHELIN-star Shang Palace in Hong Kong, or hand-shaped Tortelli with Pesto Genovese with Marco Manocchio, chef de cuisine of Italian restaurant Dolce Vita at the Mandarin Oriental Singapore. On Instagram, let veteran chef Wolfgang Puck entice you as he demonstrates how his signature Lobster with Truffle is made at his MICHELIN-star Cut in Beverly Hills.

Take a look at how we make Lobster with Truffle at our Michelin Starred restaurnt @cutbeverlyhills. Thank you to @charlotte_collard and @michelinguide! ⭐️ 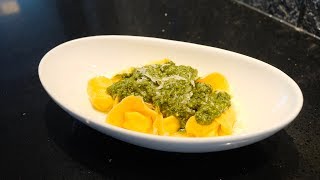 Massimo Bottura’s Instagram Show: Quarantine Kitchen
The celebrated chef of three-MICHELIN-star Osteria Francescana and his family have given people direct access to their home kitchen with a casual nightly cooking series on his Instagram page. Instructions for vegetable Thai curry and tortellini in panna are delivered with the chef’s characteristic panache and the help of his family.

Hey All, here are a couple clips from last nights dinner - we had a first and second course and finished with dessert! See you all tonight for the second edition of Cena Degli Avanzi - Leftover Night!! Tune in at 8pm CET for #kitchenquarantine • Stay Safe and Stay Tuned! • Thank you again: @franceschetta58 @mymenu.it

Ferran Adria’s Family Meals On Twitter
The legendary chef of three-star elBulli fame takes his cookbook The Family Meal online with a series of Spanish-language cooking tutorials on his Twitter account — try your hand at these simple and inexpensive dishes that fed his staff during mealtimes at the now-shuttered restaurant.

Eric Ripert’s Home Cooking On Instagram
From a quick chicken and red wine stew to a “super easy” cheese tortellini meat sauce for pasta, Eric Ripert of three-star Le Bernardin in New York shares his go-to recipes for cooking at home in simple recipes with photos and video clips.

Daniel Boulud’s Cooking Demos On Instagram
His vaunted two-star restaurant Daniel in New York City may be closed, but chef Daniel Boulud has been keeping himself occupied with short cooking demonstrations on Instagram for culinary basics like Hollandaise sauce and French-style scrambled eggs.

It was still my birthday’s week this sunday brunch and i order my own smoked salmon for my birthday and what better than french style scrambled eggs with it ( caviar was a delicious gift and my kids loved it) ! All DB smoked salmon and other wonderful and unique ingredients from SOLEX Fine Food purchased online at www.solexcatsmo.com 20% on all purchase online will be donated to hand in hand by db foundation .thank you @solex_catsmo #markusdraxler Get ready for your next brunch ! Best smoked salmon in America for a good cause . Ship anywhere in the US. @solexfinefood

Dominique Ansel’s Easy Home Cooking On Instagram
Acclaimed NYC baker behind MICHELIN Plate restaurant 189 by Dominique Ansel in Los Angeles may have rocketed to fame for inventing the Cronut, but he’s spending his time at home now sharing easy recipes for banana bread and pork dumplings.

Rainy day today, and if you’re like me, you probably have a bunch of bananas getting too ripe in your kitchen. So let’s make banana bread. Check out the full video, and here’s the recipe (from my book Everyone Can Bake, out on 4/14). Ingredients: 400g (2 cups) sugar 250g (2 cups) All Purpose flour (plus more for dusting) 3g (3/4 tsp) baking soda 2g (3/4 tsp) ground nutmeg 5g (1 tsp) salt 5g (1 tsp) baking powder 150g (3 large) eggs 400g (2 cups, about 3-4) overripe bananas, peeled & mashed 200g (14 tbsp or 1 3/4 sticks) unsalted butter, melted, plus more for greasing Equipment: loaf pan mixing bowl spatula 1. Preheat oven to 350°F (175°C). Butter the bottom, sides, and edges of the loaf pan. Pour in some flour, shake it around until the pan is evenly coated, then tap out any excess flour. (You can also use parchment paper). 2. In a large mixing bowl, mash the bananas with a fork. Add the dry ingredients and the eggs, and mix with a spatula until well combined. Stir in the melted butter until fully incorporated. 3. Pour the batter in the prepared pan, filling it to 3/4 inch (2 cm) from the top (you may have extra batter). Bake until the cake is golden brown (about 1 hour) and a cake tester or paring knife comes out clean. 4. Let the cake cool in the pan for 15 minutes. While the cake is still warm, turn it out of the pan. Slice and enjoy while the cake is still warm. Storage: The banana bread can be wrapped tightly in plastic wrap or placed in an airtight container and stored at room temperature for up to 2 days. For longer storage, wrap it tightly in plastic wrap, place in an airtight container, and freeze for up to 3 weeks. To use the frozen banana bread, remove it from the airtight container and transfer it to the refrigerator (still in the plastic wrap) to thaw for at least 3 hours or up to overnight, until the banana bread is soft again. #EveryoneCanBake

We are sheltering at my house right now … my three daughters and my niece and of course my wife … so we have a big challenge for all of you. We @WCKitchen want to know what you are cooking at home with #RecipesForThePeople! Time to be creative! So here is a video of a quick and easy snack that might not be beautiful but I promise you it tastes amazing. It's very easy, made with seaweed, sushi rice, sumac, and some anchovies (at my house we love tinned fish) Here is my favorite recipe for sushi rice.. I leave the rest up to you! 2 cups sushi rice 1⁄2 cup rice vinegar 1 1⁄2 T sugar 1 t salt Rinse the rice to remove starch, 2 or 3 times & drain it. Put it in a pot with 2 cups water, stir & soak 10 mins. Cover & boil over high, then heat to low and cook for 15min. Remove from the heat and let the rice steam for 5 minutes..while it is cooking, mix the vin/sugar/salt. Spread the rice on a baking sheet to cool, pour the seasoned vinegar over it and stir/fold … don’t smush the grains! Stir until it is cool, and then eat it!

READ MORE: Done cooking? Now learn learn how to plate dishes like a MICHELIN star restaurant
Photos in the banner photo are compiled from the restaurants and chefs' social media accounts.

Asia Chefs and the Community COVID-19
Dining In 3 minutes

Inspectors Michelin Guide Chefs and the Community
Dining In 2 minutes

COVID-19 Chefs and the Community Sustainability