Learn how to whip up this classic Italian pasta dish from chef Marco Manocchio of Dolce Vita.

Making pasta holds an indelible spot in the heart of Marco Manocchio, chef de cuisine of Italian restaurant Dolce Vita at the Mandarin Oriental Singapore. Whenever he returns to his home city of Rome, pasta tops his list of things to cook. And the strapping chef helps his 84-year-old nonna (grandmother in Italian) roll out pasta dough that she insists on making from scratch these days.

His family’s heirloom recipe of doling out dough simply from egg yolk and flour was passed to him by his nonna at the tender age of four. During the summer months of his childhood years, he would live with her for two to three months. Their morning ritual, he recalls fondly, was waking up early in the morning, selecting eggs from a nearby farm before returning home to make pasta for family meals. 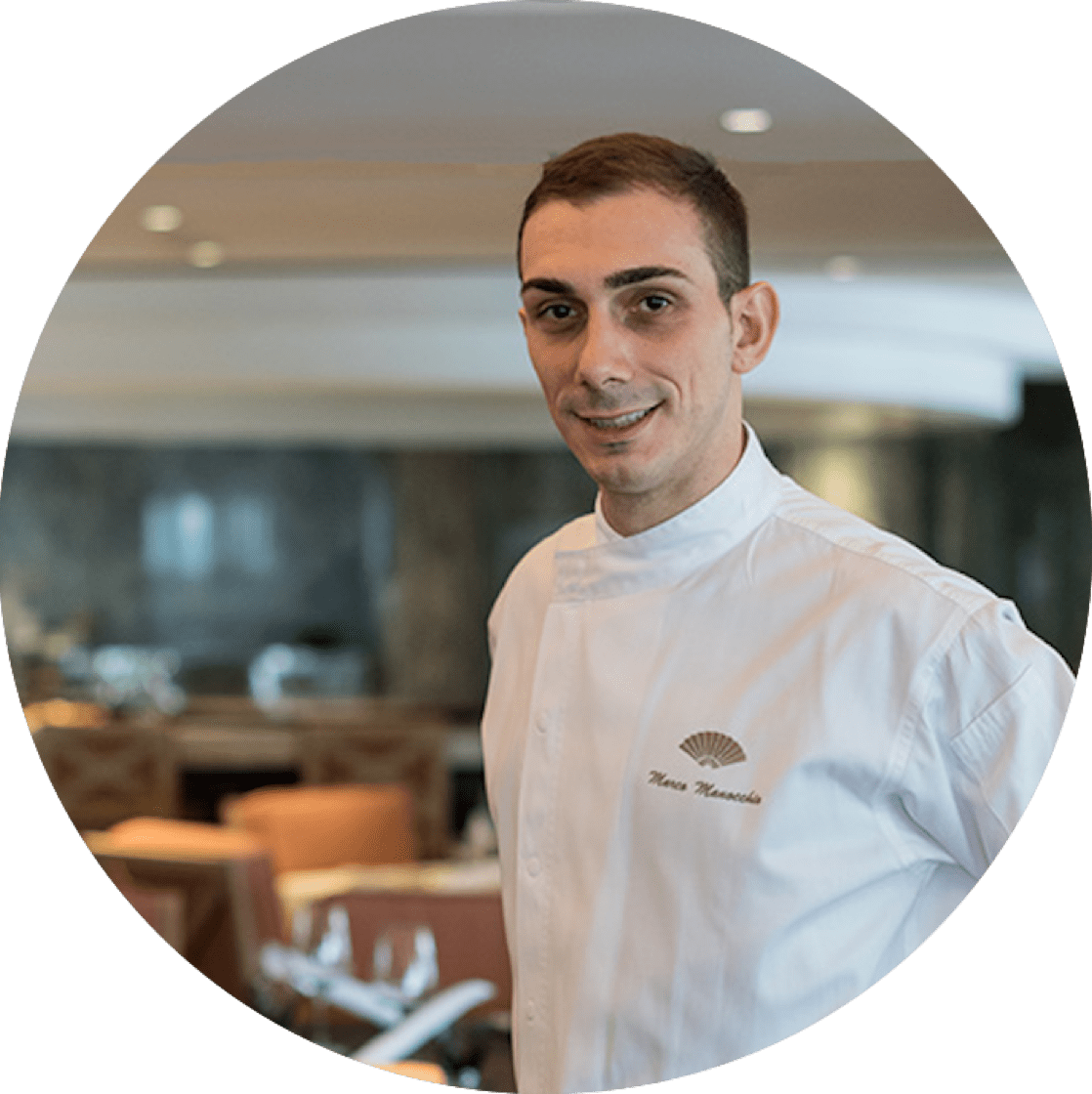 The first pasta he mastered was cavatelli, a thick and chewy shell-like pasta made from an eggless semolina dough that is made by pressing down the dough to create rolled-up ruffled ridges to hold up the pasta sauce—and in his family’s kitchen—cheese sauce with borlotti beans.

Gesticulating the action, he says with a chuckle: “My older sister and I would compete on who can press out more pastas with our fingers in the shortest period of time—the winner changed everyday.” 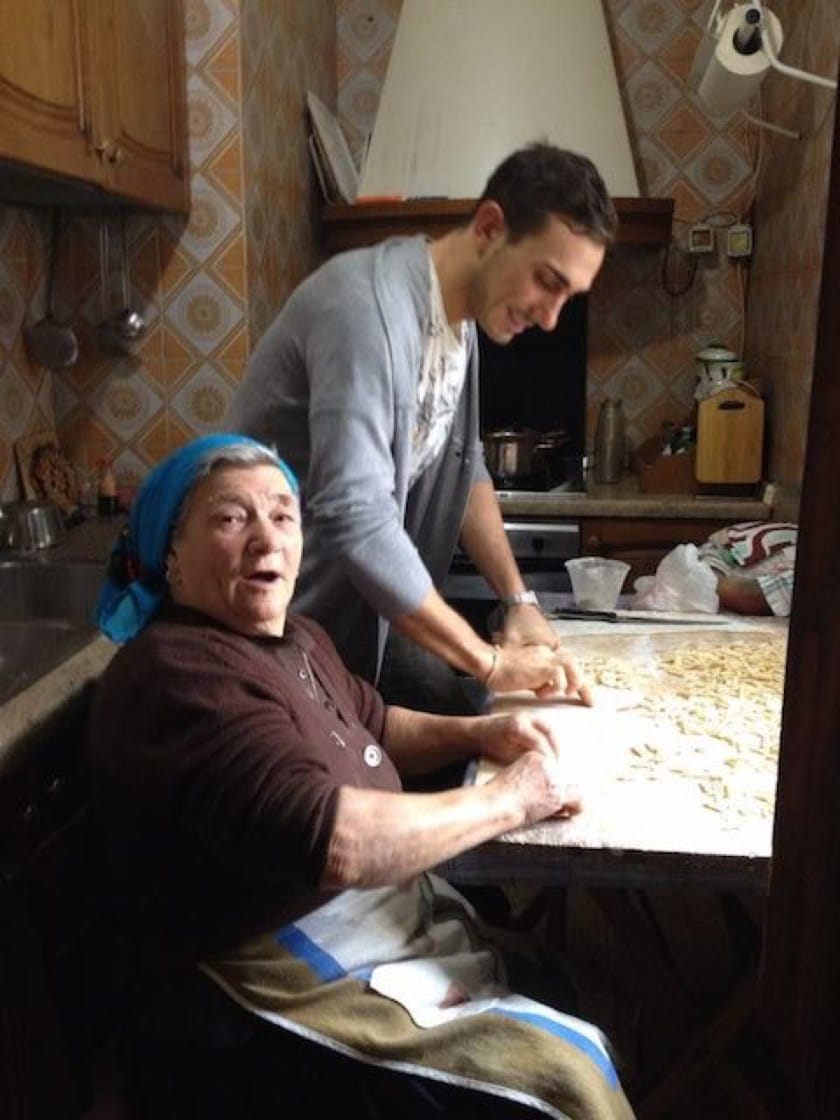 To this day, his nonna (left) holds the fort of making the pasta dough while he assists to cut the pasta dough and prepare the fillings. From tortelli, spaghetti to tagliatelle, chef Marco’s nonna is a pro at rolling them out. He says: “Although she is old, she still has the energy and enjoys making pasta. She doesn’t go out much for shopping and is always in the kitchen.”

Chef Marco has brought over his love for pasta to Dolce Vita with dishes such as norcina, hand-cut tagliolini with Umbria sausage, ricotta, spinach and black truffle, and orecchiette (ear-shaped pasta) with king prawns, Datterini tomatoes and smoked bell pepper coulis.
Another popular dish at Dolce Vita is the Piedmont-style braised beef tortelli drenched in mushroom consommé and topped with pureed and diced chestnut. Here, chef Marco shares a home kitchen-friendly recipe—tortelli with pesto genovese. 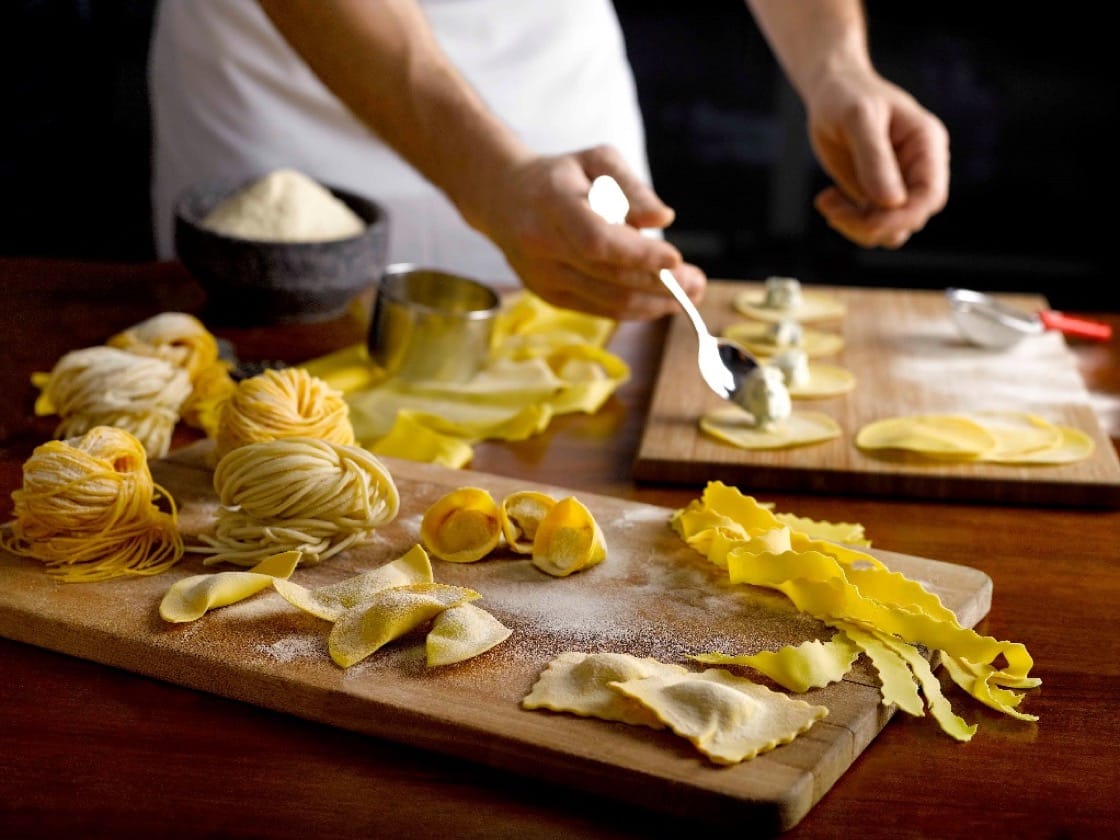 A rich variety of pasta is served at Dolce Vita.
The springy round hat-like pasta stuffed with ricotta cheese and spinach is slathered with a fresh herbaceous sauce made with basil, Parmesan cheese, olive oil and pine nuts. Hailing from Emilia-Romagna, legend has it that tortelli’s dainty shape is inspired by the navel of the Roman goddess of love, Venus.

What makes a good tortelli? Chef Marco says: “You need a good balance of the thickness of the pasta dough and good filling. If the pasta dough is too thick, you cannot really enjoy the filling inside. The reason why we love tortelli is that the filling gives a surprise when we bite into the pasta.” 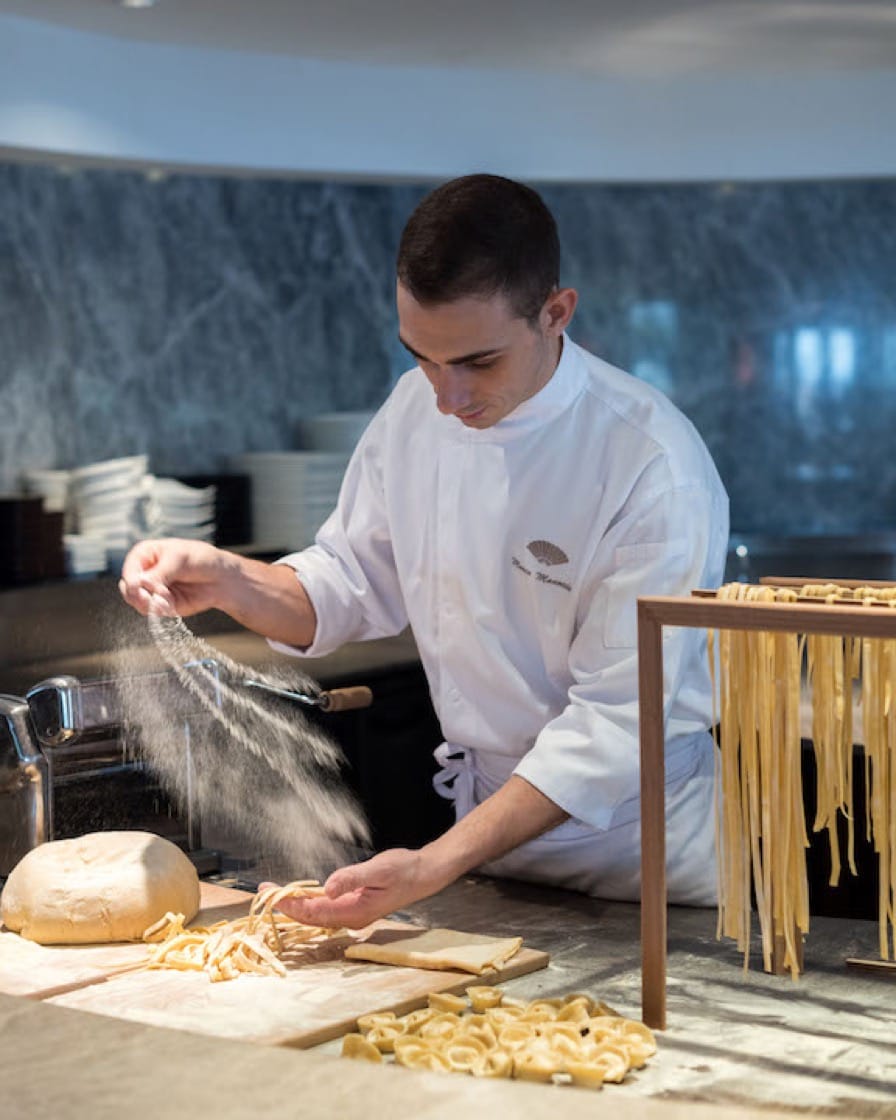 To achieve the right thickness of the pasta dough sheet, he uses a tip that his grandmother has given him—roll the dough until it is thin enough that you can see the outlines of your hands when holding it.

Holding up a thinly-rolled dough that resembles silky soft cloth, he says: “When the dough is almost transparent, it has the right thickness.”

Chef Marco’s eyes light up when he gets asked about his favourite pasta. “Carbonara spaghetti,” he says in a heartbeat. The dish, is after all, the most popular dish in his home city of Rome. He gushes: “I grew up with carbonara and ate it almost everyday. With eggs,
guanciale or pancetta, black pepper, Parmigiano, Pecorino and spaghetti, you can get the best dish.” 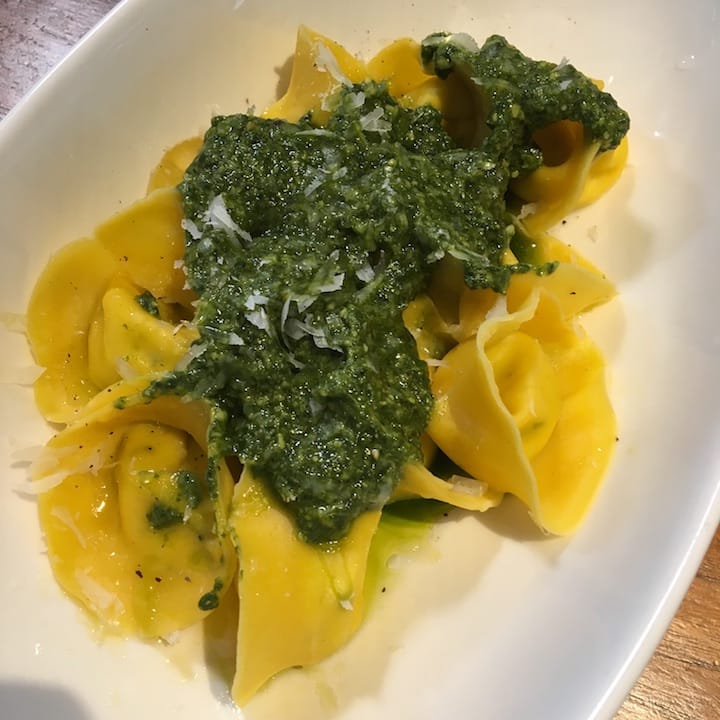 Method 1. For the pasta dough: In a mixing bowl, mix the egg yolk with the semolina and plain flours well until it becomes a dough; wrap in cling wrap and chill in the refrigerator overnight.

2. For the filling: In a pot set over low heat, melt the butter, stir in the flour and cook  for two minutes. Whisk in the milk until a custard-like consistency is achieved. Add the Parmesan, ricotta and spinach; season to taste with salt pepper and nutmeg.

3. When the filling is ready, take the dough out of the refrigerator and set it at room temperature.

5. Brush water on the dough. Cut it with a 8mm ring cutter and place 1 teaspoon of filling in the middle of each pasta dough. Fold the dough into half and press down the sides to seal the parcel. Pinch both ends of the parcel and seal both edges together without pressing the filling downwards. Repeat for the remaining dough and filling.

6. Bring a large pot of water to a rolling boil; add enough salt to make it taste like the ocean. Add tortelli and cook for 2 to 3 minutes till the pasta floats. Strain and place pasta in a bowl.

7. For pesto genovese: Add basil, Parmesan, 50 grams of extra-virgin olive oil, pine nuts, butter and garlic clove to the bowl of a food processor and blend until smooth. Refrain from blending it for too long so that the mixture does not lose its vibrant colour.

RELATED: Technique Thursdays: Pasta-Making Tips and The Texture of Pleasure