Nasi ambeng, pronounced “umm-bng”, experienced a brief moment of notoriety this year when Peranakan restaurant Violet Oon Singapore (MICHELIN Plate 2019) introduced a Nyonya Nasi Ambeng Tray to its menu. The creation, served in a rectangular takeaway box and featuring the typical Peranakan blue pea flower-tinted rice, was duly renamed as family trays, while the restaurant acknowledged and thanked the people who came forward to explain the nuances and origins of the dish.

Mastura Didih, the second-generation director of Bib Gourmand restaurant Hjh Maimunah, is more bemused than bothered by the Peranakan restaurant’s unintended faux pas in restyling the dish when we ask her about it.

“Actually, the dishes included by the restaurant were not wrong to me, but they presented it without the dulang,” she says. Without the round dulang, or tray, the dish can’t be served as it is intended – to gather people in the spirit of community.

So what exactly is nasi ambeng?

Nasi ambeng, sometimes also spelled as nasi ambang, is a traditional Javanese sharing platter in the style of nasi campur, which is steamed rice surrounded by side dishes. Nasi ambeng originated as a communal dish for celebrations and festivals, where a centre mound of steamed rice is served on a round tray lined with banana leaves and surrounded by celebratory meat and vegetable dishes for the occasion. 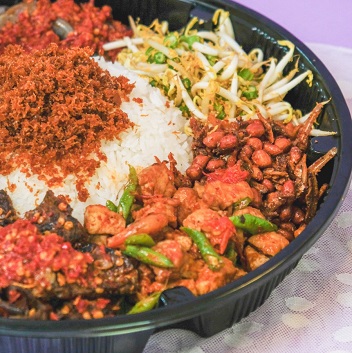 The platter typically holds enough food for four to six people, who sit around the tray and partake in the meal, traditionally eating with their hands.

Nasi ambeng is not to be confused with nasi tumpeng, also from Java, which is considered one of Indonesia’s national dishes. Nasi tumpeng has deeply traditional and spiritual roots, with its cone-shaped yellow rice mound meant to evoke the peak of Mount Semeru in East Java, a holy mountain, and the feast itself as a thanksgiving for harvest blessings and other festivals and official occasions.

Unlike nasi tumpeng, nasi ambeng is also enjoyed for everyday occasions that bring people together, whether a graduation, wedding, birth or reunion. Mastura shares that the tradition of nasi ambeng has stayed strong from kampung days to now, and even became popular in the mid-2010s with multiple options available from Malay and Indonesian restaurants and food stalls.

“We didn’t start offering it before as we didn’t want to be seen as being the same as others,” she explains. However, when dining-in restrictions were lifted after Circuit Breaker, she and her siblings felt it was an appropriate offering to celebrate the ability to get-together once again with family and friends. “Anyone can style and design a nice looking nasi ambeng, but when we do it, we want to make sure it not only looks good but also taste good and not simplify the food,” she emphasises.

HEADING OUT: Dine on exciting new menus from reopened restaurants 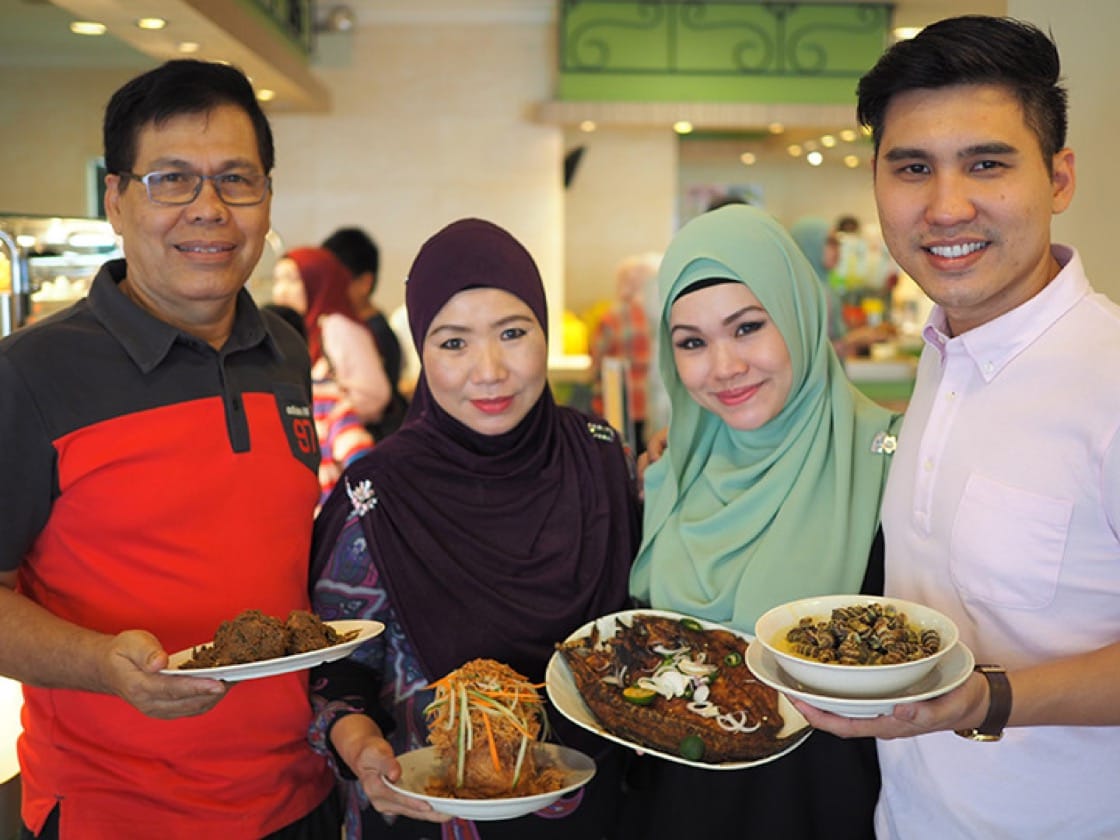 This boils back to their start as a family business named after Mastura’s grandmother, Hajah Maimunah, a feisty entrepreneur in the 1960s who led groups on the Hajj pilgrimage to Mecca. The restaurant was initiated by Hajah Maimunah’s daughter, Mahiran Abdul Rahman, who discovered that she enjoyed feeding and catering to her mother’s customers. Her careful selection of recipes and hard-to-find dishes gained recognition and a loyal following. After building up the business to two outlets and a catering hall, she and her husband Didih Ibrahim have retired and passed on the brand to the next generation. All five siblings – Ismail, Ibrahim, Maria, Mastura and Maryam – are involved in the business.

Hjh Maimunah does not bill itself as a nasi Padang restaurant – which serves traditional dishes from Padang – although these dishes can be part of the bill of fare in a nasi ambeng. Mastura considers their cuisine as “kampung food” from the Nusantara, spanning recipes adapted from Malaysia, Singapore and Indonesia.

Many of the dishes require painstaking labour-intensive processes as well as specially sourced ingredients to preserve the best taste of the recipe – for instance, the beef rendang uses fresh coconut milk, as well as their own bumbu (spice blend) for the flavour of the beef rendang. As much as possible, they make everything from scratch, such as kerisik (toasted grated coconut) for the urap and sambal belachan.

At the end of the day, the spirit of nasi ambeng isn’t just what’s seen on the tray, but the desire to nourish and unite diners over the comfortable flavours of home.

When it comes to flavourful Asian dishes, the secret to wine pairing is in the sauce, shares Wolf Blass Brand Ambassador Catherine C Wong.