The Tourist's Guide To Nasi Padang

Whether you're a tourist from abroad or playing tourist in your own home, here's a guide to nasi padang so you'll be ordering like a seasoned pro in no time.

That’s the number of dishes that Bib Gourmand recipient Hjh Maimunah, a casual nasi padang place produces each day, says Ismail Didih, the second generation family member of the business. It’s a staggering number for any restaurant and if you’re new to the cuisine or are a traveler looking to have a taste, that huge selection could leave you stumped.

How does a beginner order, and what exactly are the dishes?

First, a definition: Nasi padang is literally translated as ‘rice’ from Padang city in Indonesia. It’s a style of eating where the diner is presented with a number of dishes to choose from. In Singapore, the selection often showcases the diversity of dishes from all over Indonesia and Malaysia.

But don’t be fooled for despite the sheer number of dishes on display, ordering is a fairly straight forward affair. Choose between having it two ways: as mixed rice (nasi campur) where all the different dishes are served on your own plate or served family-style (hidang) where each selection is placed on individual plates. The latter is ideal if you’re dining in a larger group. 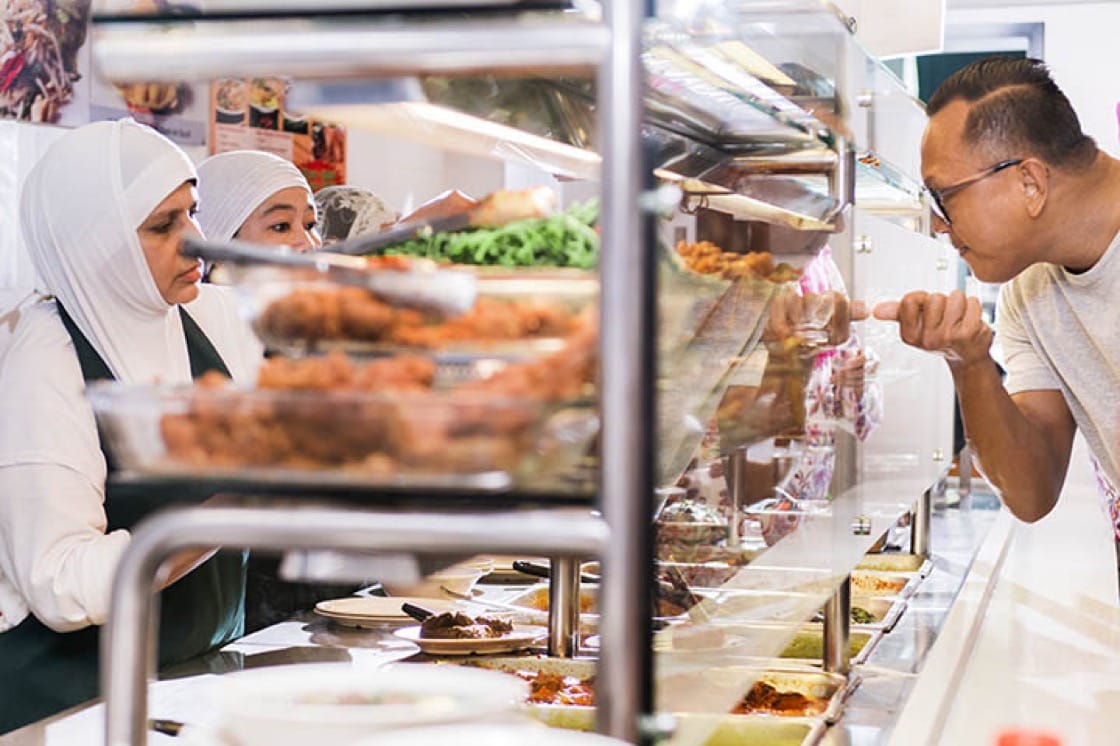 Making the selection from the nasi padang spread. Photo credit: Hjh Maimunah.
“For mixed rice, just point to what you like to have and it will all be in one plate,” says Ismail. “For family style, inform the server on how many people will be sharing with you. The server will dish out the appropriate portion.”

While it's easy to go overboard and order to your heart's content, Ismail advises getting a balanced variety of flavours and textures. This, he says, should consist of a meat-based dish, one side dish and one vegetable dish to accompany the rice.

"One of the dishes should have a coconut based gravy doused over the rice," he says. This not only flavours the rice with an umami kick but also makes sure the meal isn't too dry.

Here are some highlights from the eatery's selection. 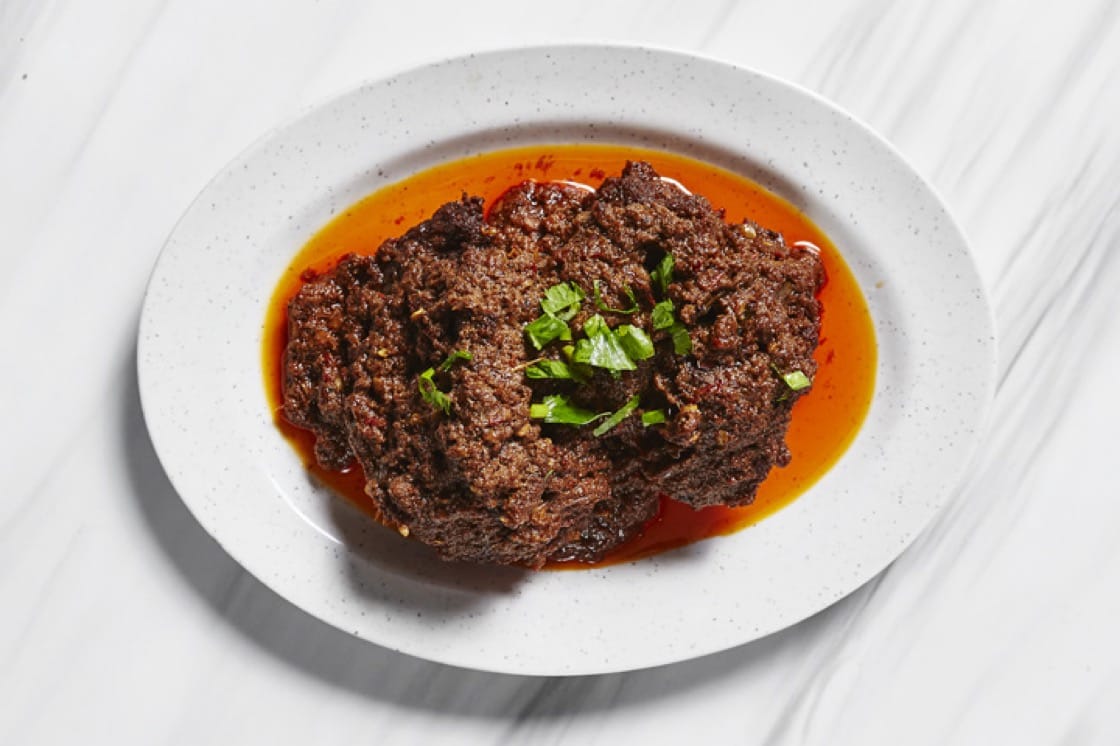 Rendang. Photography by Wong Weiliang.
Rendang
It looks innocuous, being just beef in a nondescript brown gravy but once you’ve had a taste, you’ll realise why this dish is ubiquitous across the region. It’s a slow cooked dish of robust flavours where ingredients like garlic, ginger, galangal and lemongrass are ground into a rempah (spice paste) and then braised in coconut milk until the gravy is somewhat dry and the beef is fork-tender. Some food historians believe that the dish originates from the Minangkabau region of Indonesia. One tip to gauge if the rendang before you is a good version: “Beef Rendang is a dry curry and it’s not supposed to be saucy, the concentrated flavour of the curry should be like a thick paste that coats the beef cubes," says Ismail. 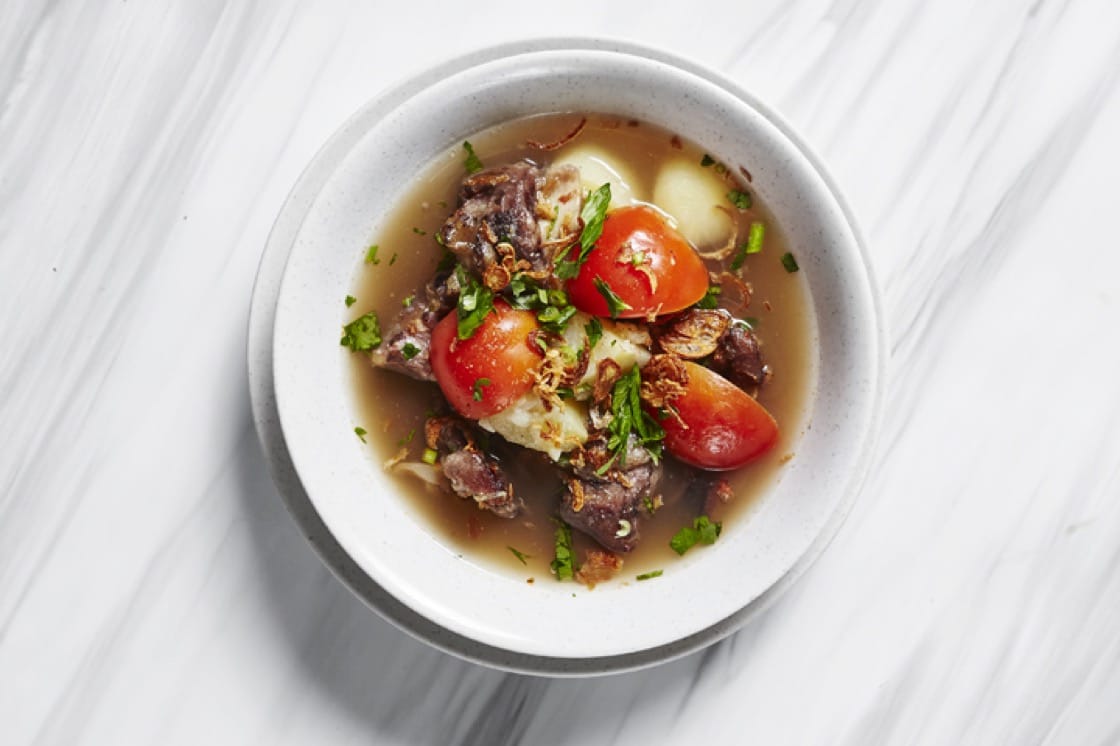 Oxtail soup. Photography by Wong Weiliang.
Sup Buntut (Oxtail Soup)
No Asian meal is complete without soup and it’s no different when you’re tucking into nasi padang. Soups from this region though is spiced, often with by placing ingredients like coriander seeds, cinnamon and aniseed in a cheese cloth and then left to boil in the clear broth. Oxtail soup is popular across Indonesia and stands as a symbol to the spread of Western produce as carrots, tomatoes and potatoes make an appearance in this dish. To serve, it is garnished with fried shallots and chopped Chinese celery. 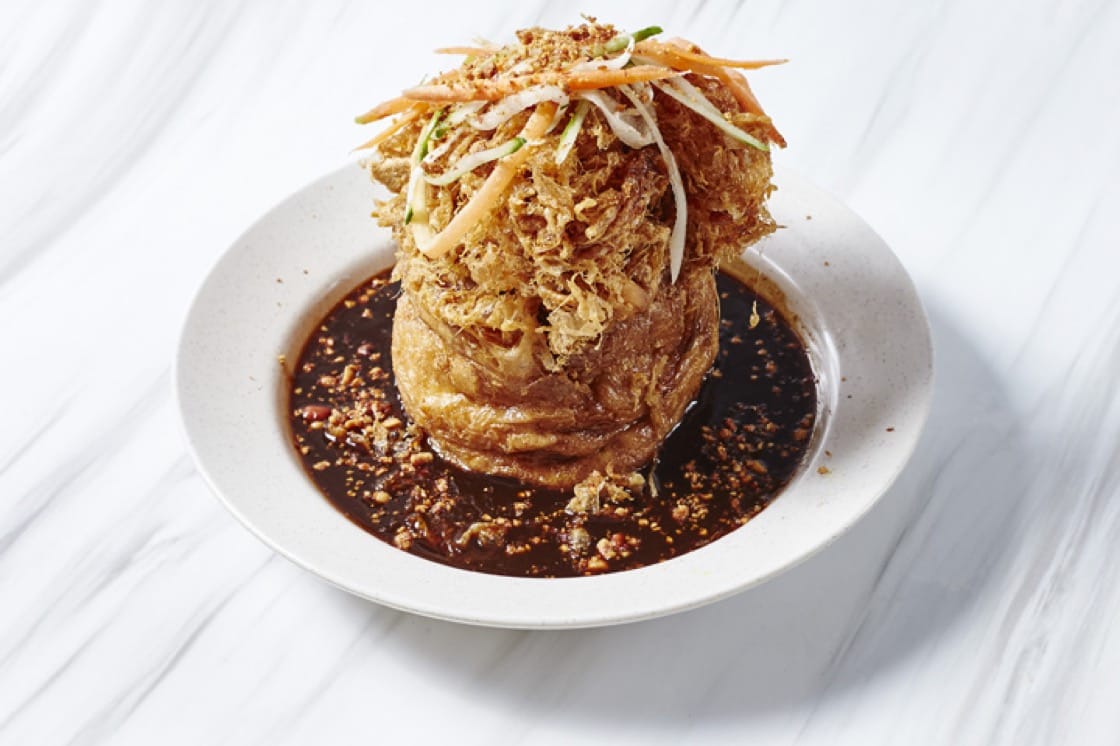 Tahu telur. Photography by Wong Weiliang.
Tahu Telur
It’s sweet, savoury, crispy and crunchy. That just about sums up the pleasures of this tofu dish where bean curd is first cubed then deep fried with beaten eggs. This results in crispy umami bits at the top that’s a joy to nibble on while the centre remains soft and warm. The brown sauce that surrounds the base of the towering creation is made of tomatoes, soy sauce, onions, garlic and sugar. When served, it is showered generously with chopped peanuts and julienned cucumbers and carrots. 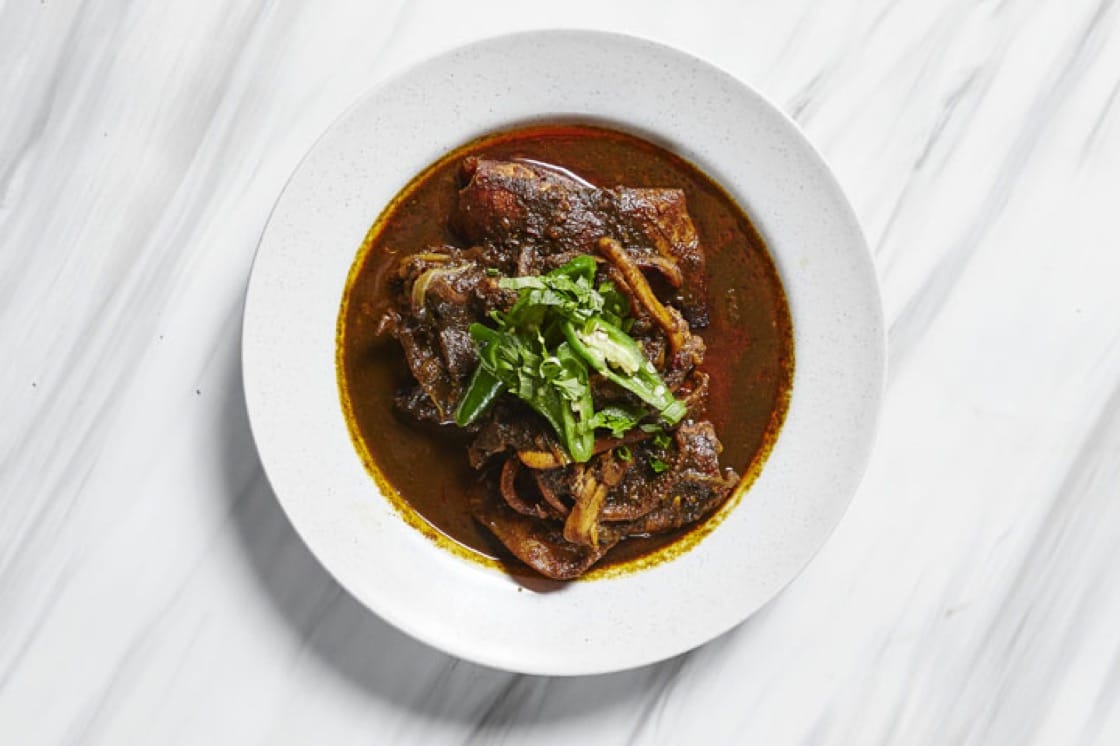 Sotong hitam, or squid cooked in it's own ink. Photography by Wong Weiliang.
Sotong Hitam
The use of squid ink in the culinary world is not limited to the black pastas of Italy but can also be found in Malay and Indonesian cooking where it is used as part of a soupy gravy like this sotong hitam. The name literally means black squid and is made by first sautéing shallots, ginger, garlic and lemongrass before adding tamarind juice and squid ink. It results in flavours that are rambunctious even if the gravy might look nondescript. 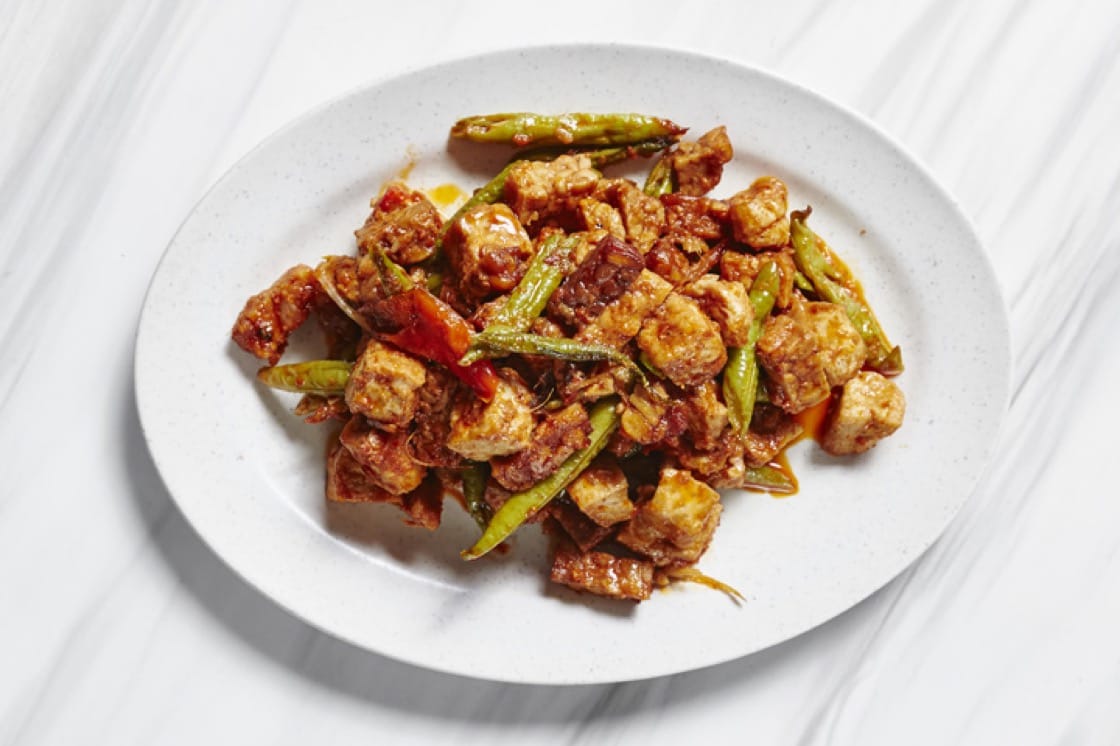 Sambal goreng. Photography by Wong Weiliang.
Sambal Goreng
It might look like a simple stir fry but the steps and ingredients to making this dish might surprise you. What’s most visible is tempeh, tofu, shrimps and long beans but the hidden ingredients are a medley of spices, coconut milk and candlenuts. Here, tempeh and tofu is first fried until golden brown. Next, a spice paste of ginger, galangal, shallots, lemongrass, chillies, candlenuts and garlic is blended and stir fried until fragrant. Shrimp paste is then added, followed by tamarind juice and coconut milk. This mixture is then simmered until the sauce thickens and then tempeh, tofu and long beans are added back into the pan. 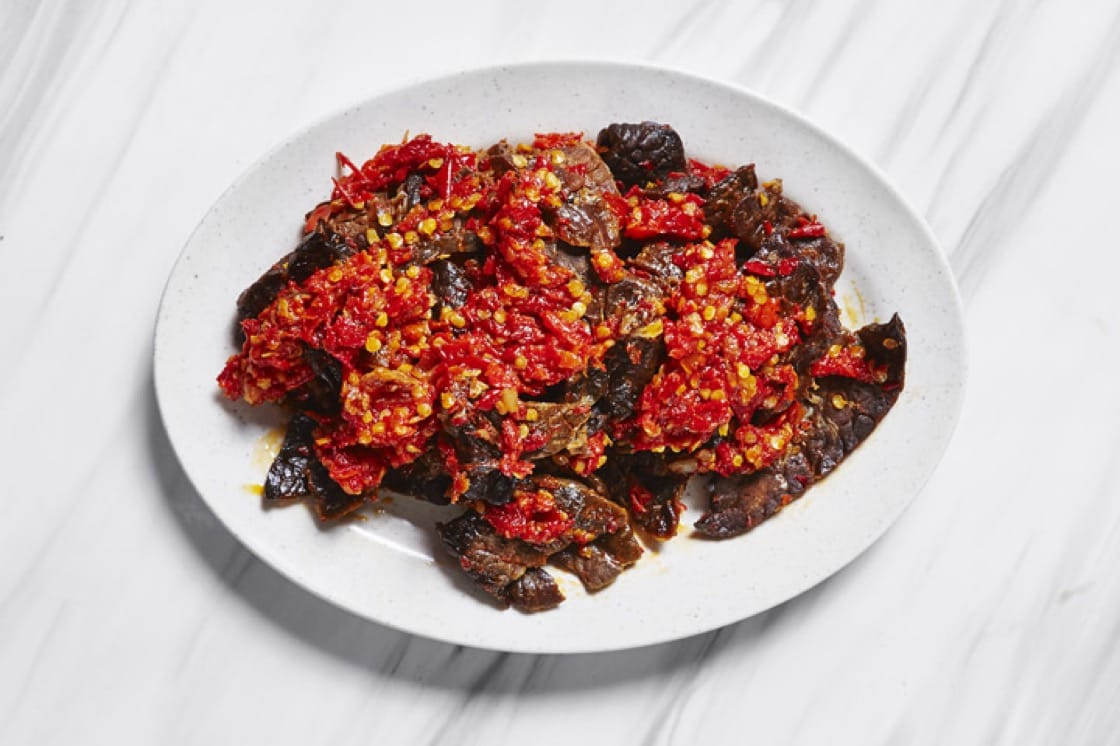 Paru Belado
Beef lungs aren’t the most common part of the cow seen on menus but it’s a fairly popular ingredient when it comes to nasi padang. To cook, it is first braised for long hours until soft. This paru belado dish is really a two parter; once the lungs are tender, they are sliced thinly and then deep fried until crispy. Some eateries coat the lung slices in dried turmeric powder before frying. The second part is the making of sambal belado. It’s a spicy relish made by blending tomatoes, shallots and chilli that’s stir-fried until it turns into a delicious red hue and then slathered all over the meat.

Garden To Table At Tangerine

You don't have to compromise taste for nutrition with this recipe from Hilton Singapore’s wellness-centric restaurant, Verde Kitchen.

Rendangate: 5 Michelin-Listed Eateries To Have Rendang That Is Not Crispy

After a MasterChef UK judge commented that a chicken rendang cooked by an eliminated contestant was "not crispy", a rendang row has erupted.

Top 5 Spots for Ayam Penyet if You're Feeling Peckish

Here's a compiled list for ayam penyet in Singapore so you don't have to wing it.

For the Love of Tang: 5 Spots for Assam Laksa in Singapore

Where to go for the funky, spicy, tangy laksa native to Penang