Every year, pastry chefs of hotels and restaurants flex their creative muscles to concoct mooncakes for the Mid-Autumn Festival, which falls on 24 September this year. These days, mooncakes have evolved a long way from traditional baked ones filled with lotus paste and salted egg yolks. Chefs are pushing the envelope in terms of the ingredients that can be stuffed in baked and snowskin mooncakes to create adventurous flavours.

We round up mooncakes from 22 restaurants and hotels that make foodies go over the moon. 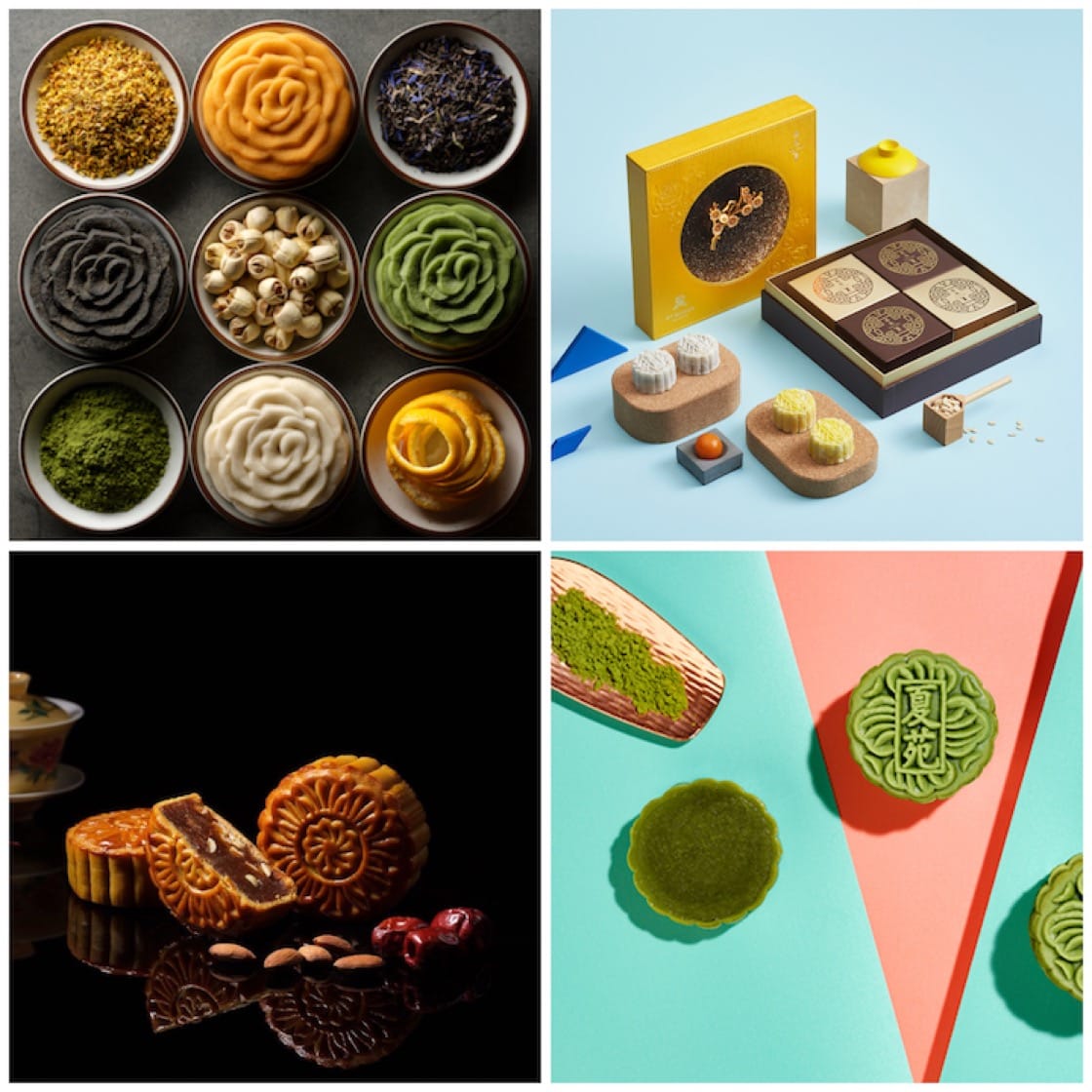 2. Yan Ting: Crafted by pastry chef Melissa Chou of the one Michelin-starred Mister Jiu’s in San Francisco, the Chinese restaurant’s snowskin mooncake addition pits the sweetness of the Jasmine tea paste against the richness of the salted egg yolk and crunchy melon seeds ($76 for a box of eight)

3. Sofitel Singapore City Centre: The Singapour Je T’aime features elements of classic desserts such as red dates and slivered almonds with the hotel’s specialty tea blend ($72 for a box of four).

1. Antoinette: Baked lotus paste salted egg yolk mooncake get a spicy kick with hae bee hiam (dried shrimps) mashed up with a rich and salted egg yolk core ($60 for a box of four).

2. The Fullerton Hotel Singapore: Love Milo Dinosaur, the iced malt chocolate drink topped with heaps of Milo powder? This snowskin mooncake has crunchy pops of Milo encased in a milk-infused lotus paste ($61 for a box of four). 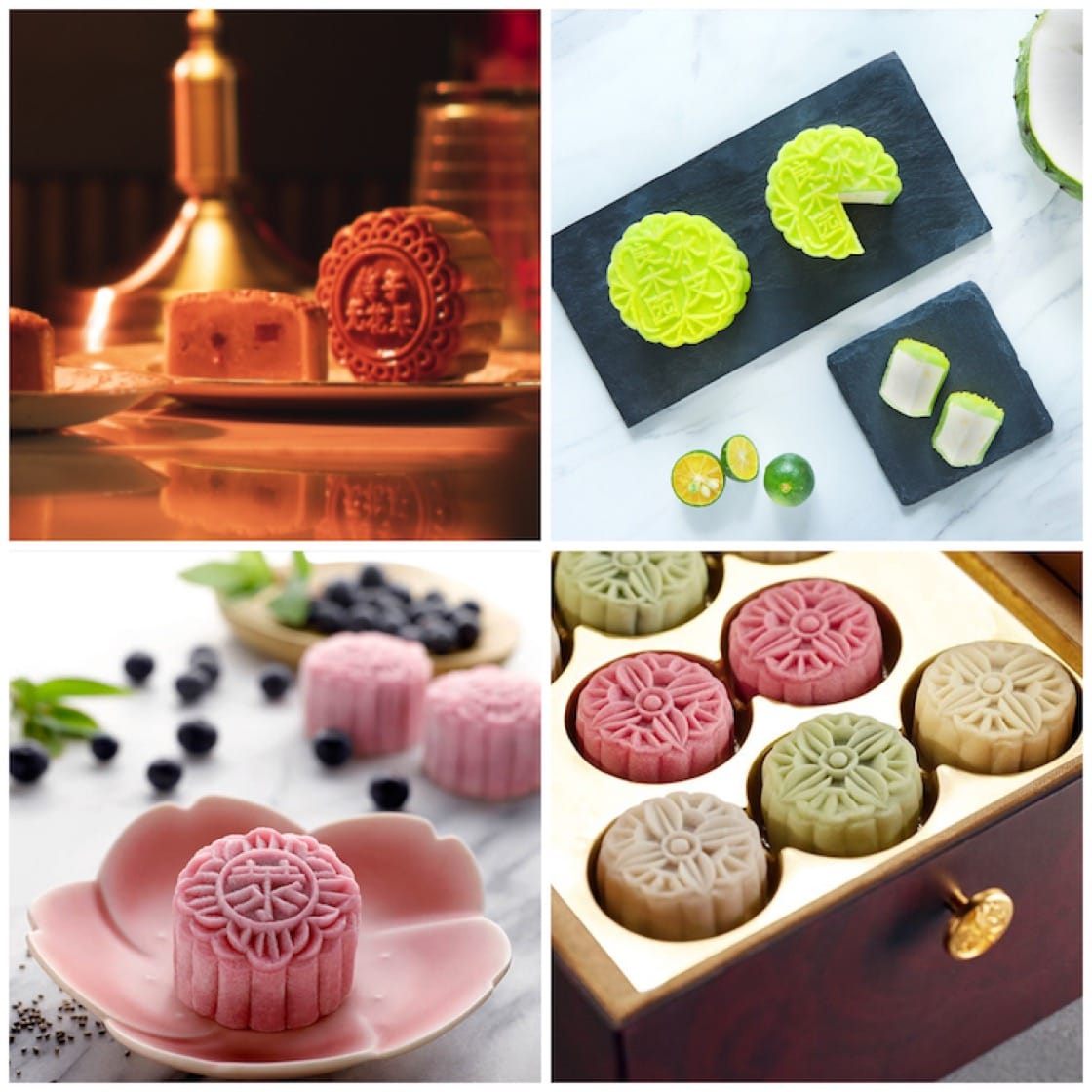 2. Goodwood Park Hotel: Love soursop and calamansi? Get a tropical hit with this lime green-hued snowskin mooncake that is plump with tart calamansi puree and refreshing soursop pulp. ($54 for a box of 4). If you enjoy almond beancurd, enjoy the Chinese dessert in the form of a mooncake stuffed with longan bits ($56 for a box of four).

3. The Ritz-Carlton, Millenia Singapore: Making its debut this year is the baked white lotus seed paste mooncake loaded with red dates and longan — a take on the Cantonese sweet soup, tong shui ($76 for a box of four).

4. Raffles Singapore: Fitness freaks can indulge without guilt with the açaí berry and chia seeds snowskin mooncake, which has the antioxidant-rich Superfood and organic chia seeds in velvety smooth Greek yoghurt ($72 for a box of four).

5. Thye Moh Chan: The time-honoured Teochew confectionery chain has injected durian flavour into its signature flaky mooncakes that are packed with mung bean paste ($43.80 for a box of four). 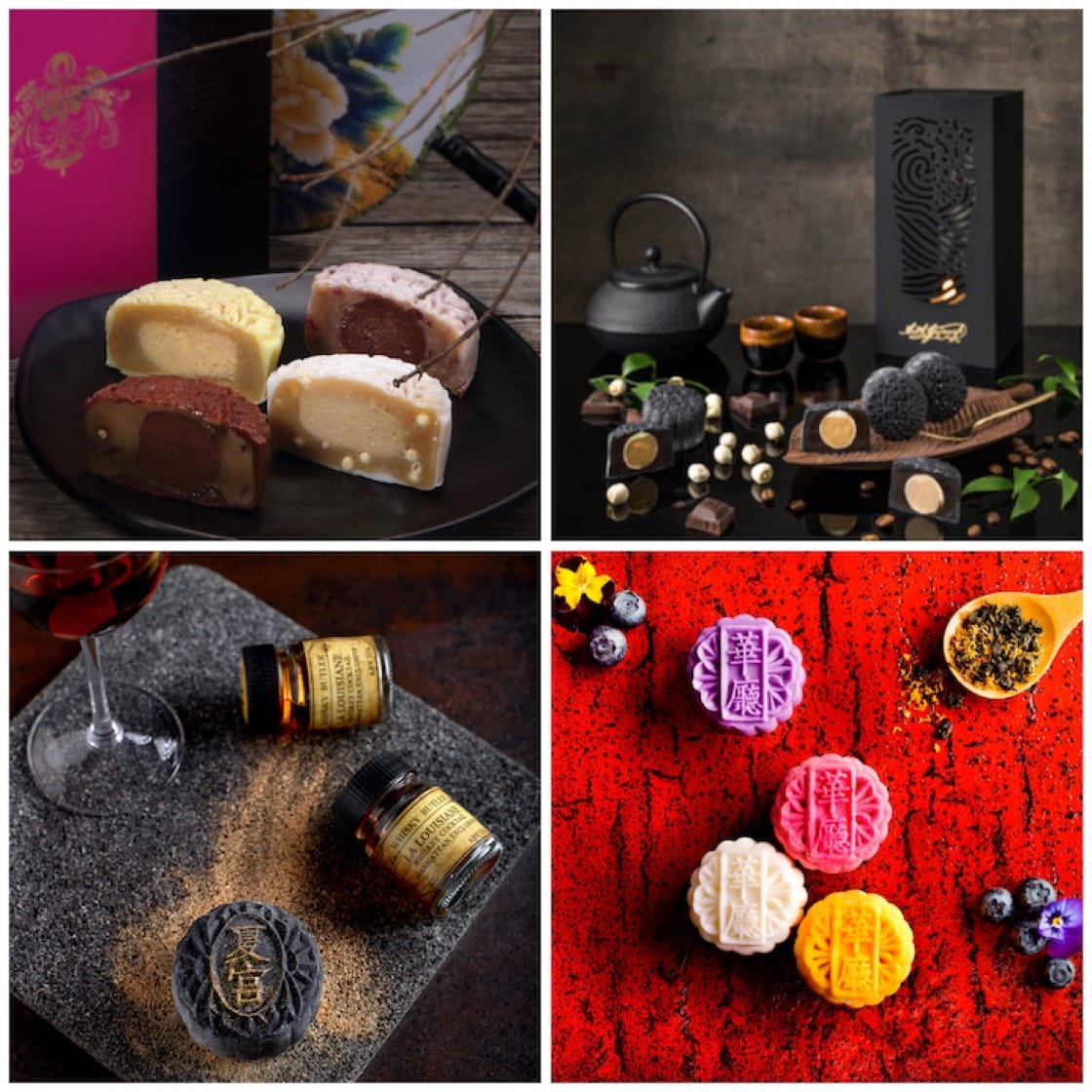 1. Old Seng Choong: Get tipple-happy with the alcoholic Heavenly Beauties Snowskin Mooncakes that is fashioned after popular cocktails — Brandy cherry, yuzu martini, Baileys whiskey with white chocolate pearl and rum and raisin with dark chocolate pearl ($68.80 for a box of four)

2. Guinness: Drink a toast to the moon with Guinness stout-infused mooncakes. The black beauty has a potent stout-infused chocolate ganache cocooned in a white chocolate shell that is nestled in coffee-flavoured lotus paste (Available free with every purchase of four packs of Guinness 4-pack (4 x 400ml) at FairPrice or on Redmart, or with a minimum spend of $90 on Guinness products at leading supermarkets)

3. Hua Ting: These blueberry snowskin mooncakes have an unusual and complex depth of flavour, thanks to the addition of a 30-year aged Chen Nian Hua Tiao Chiew, a Chinese rice wine ($69 for a box of 8). 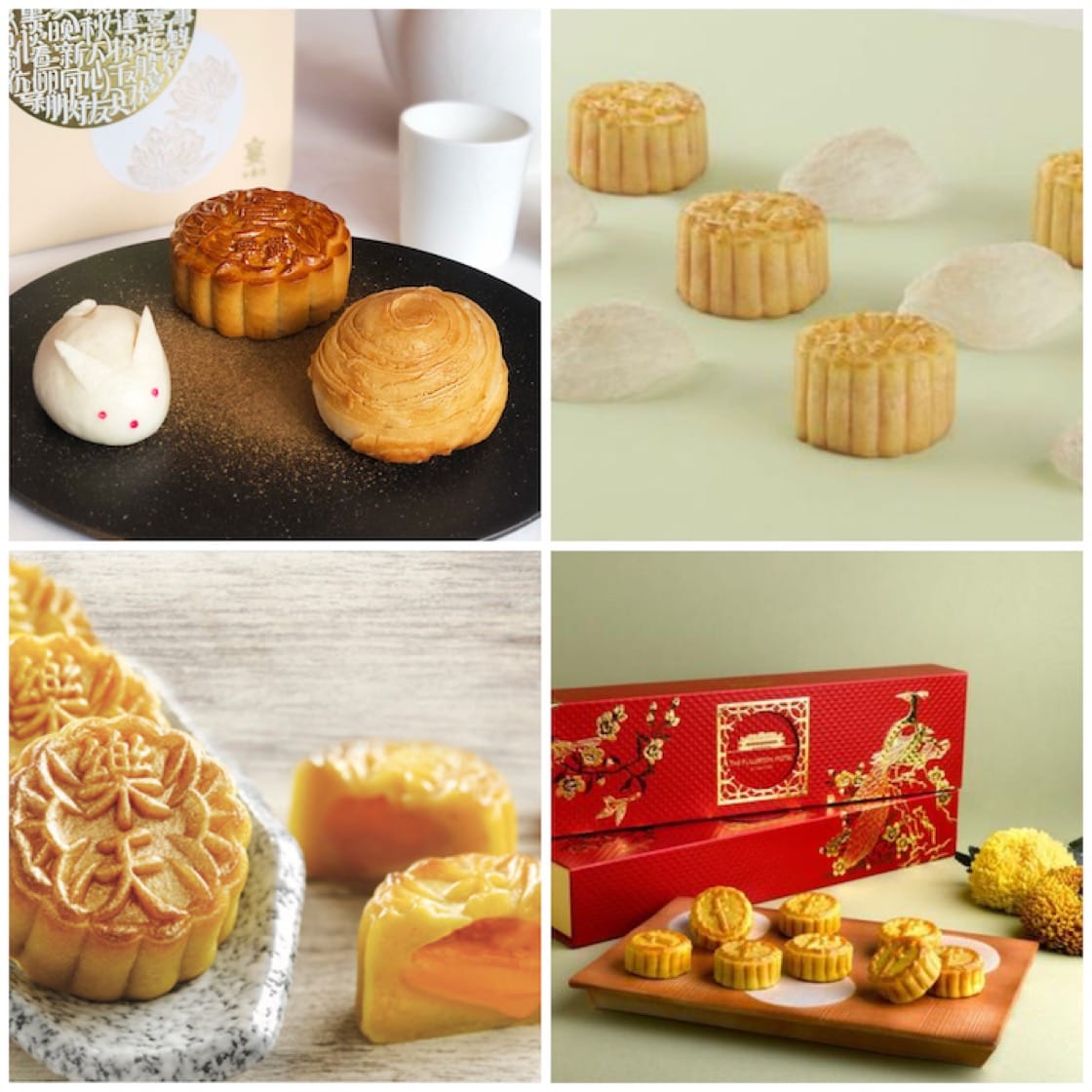 1. YAN: Nibble on the bunny ears of these adorable steamed milk custard rabbit buns that pay homage to the mythical rabbit on the moon in folklores. The bite-sized bun is filled with a creamy milk custard (available for dine-in at $6 for three pieces during lunch hours from12 to 2.30pm).

2. Shang Palace: Baked custard gets the luxe treatment in the Shangri-La Singapore’s signature mini baked custard with bird's nest collection ($118 for a box of eight) 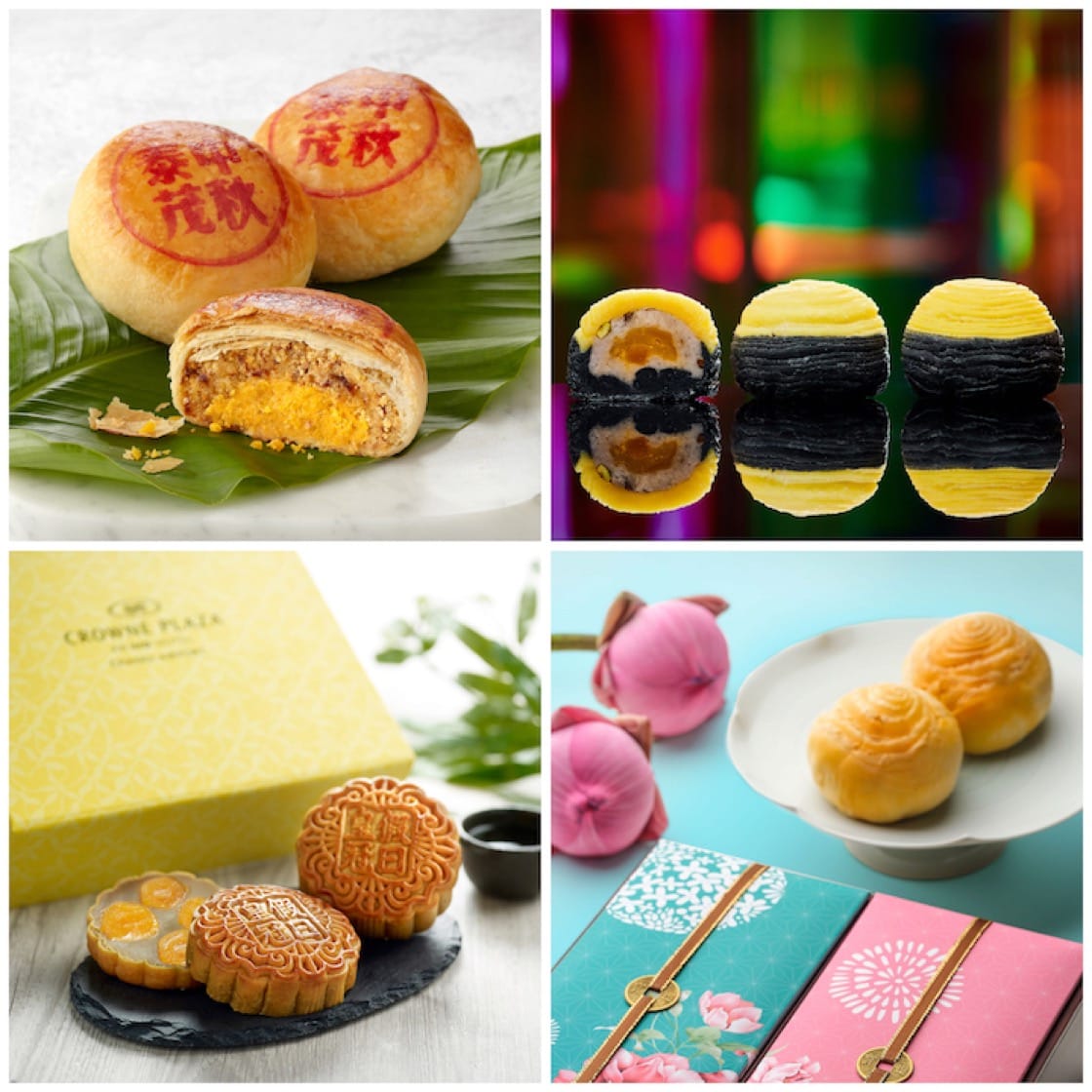 1. Mitzo: The Shanghai-style mooncake is famed for its buttery and flaky crust with a spiral design. Inside, the yam paste and salted egg filling is given more bite with crushed pistachio nuts ($128 for a box of six).

2. Mandarin Oriental Singapore: Love the classic dessert of taro with coconut milk? Get this creamy treat in the form of a baked mooncake stuffed with coconut-infused taro and sea salt caramel ($82 for a box of eight).

3. Si Chuan Dou Hua: Those watching their sugar intake can indulge in these baked filo pastry with yam paste and yolk mooncakes that are made with reduced sugar ($56 per box of four).

4. Crowne Plaza Changi Airport: Traditionalists will feel right at home with the baked white lotus mooncake with four yolks (available exclusively online at $61.60 for a box of four).
Advertisement
Advertisement