Justin Bazdarich is the chef-owner of three Brooklyn restaurants: Bib Gourmand Speedy Romeo in Clinton Hill, One Star Oxomoco in Greenpoint and, joining MICHELIN Guide New York this year, Bib Gourmand Xilonen in Williamsburg (Bib Gourmands in partnership with San Pellegrino). Ahead of the MICHELIN Guide New York star revelation, we chatted with Bazdarich about heirloom corn, climate change, and how chefs have a responsibility to push sustainable foods. 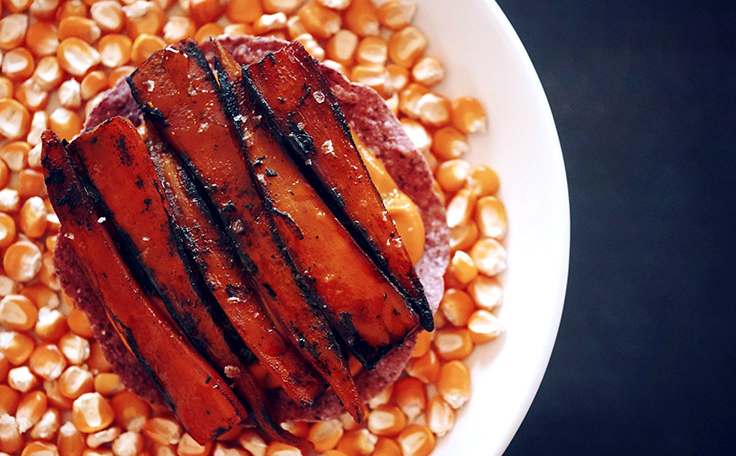 What's your favorite dish that you serve at Xilonen?
It's the carrot tostada. The carrot is the star: we choose a vegetable and then adapt the dish all around that. This carrot tostada dish is carrot three ways on a crispy tortilla. We nixtamalized the corn ourselves, make the tortillas, and fry them. On the base of the tostada is a navy bean purée that’s spiked with some carrot purée as well, and then some serrano peppers and caramelized onions that have been marinated in soy, and that’s topped with a carrot top salsa verde. With what would normally be waste, we’ve made a salsa verde. And on top of that are carrots braised in their own juice, cut them in half lengthwise, then caramelized and glazed with a maple glaze. 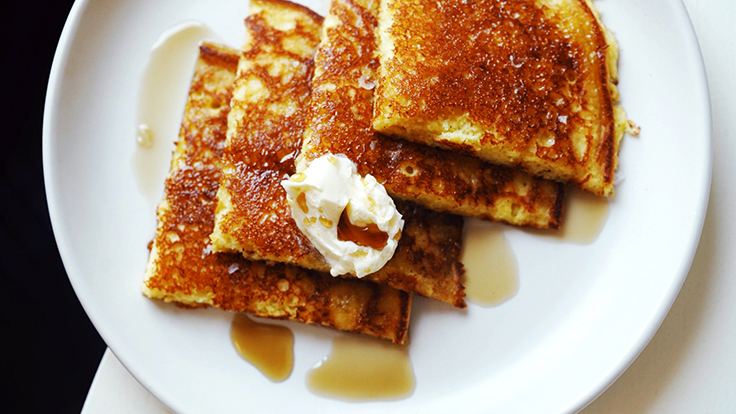 How do you make vegan food more appealing to a wider audience?
One way to make vegan more appealing is not call it vegan. Call it plant-based, or I like plant-rich menu. But it really comes down to flavor, and making sure all the dishes are absolutely delicious and hit as many flavor profiles and textures as you possibly can. I treat vegetables the same way I create a dish for a meat entrée or a dish that had some sort of animal protein in it: it’s spicy, savory, creamy, sour, and it’s got some acid. 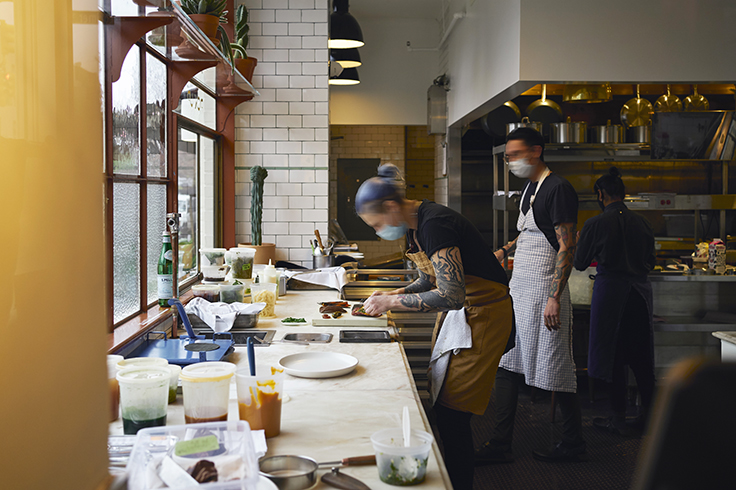 Inside the kitchen at Xilonen. Photo by Emron A Mervin, courtesy of Xilonen

Tell us about sustainability and goals for the future.
Chefs have an incredible virtue to change the way the public sees what’s delicious and craveable. We’re aiming to shift the public’s interest to understand I don’t have to have a four legged animal for lunch or dinner. We want to open people’s minds to see that vegan can be absolutely delicious. Mexican cuisine is a great way to showcase this. The goal is to decrease meat on the menus at Oxomoco and Speedy Romeo. If we open another restaurant, could it be 50% vegan and vegetarian, 25% fish, 25% meat? I’ve been working to create a chef collective or a pledge for chefs—for example, I pledge to do 50% vegan menu items. What would it look like if there are all these restaurants on the planet and 75% of them make their menu 50% vegan? What would that do to the carbon footprint of the restaurant industry? To stop selling and serving so much meat could have a huge impact on the future. I’ve been taking sustainability classes at ASU, and I've learned that if people are link up together that will make a profound outcome on climate change and global warming. That’s the mission to continue with. 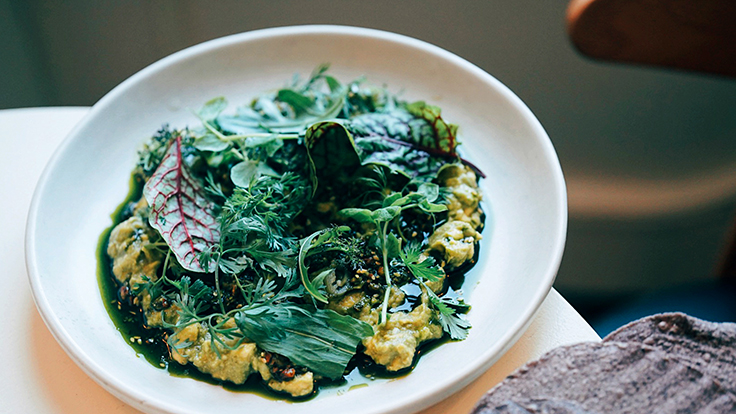 What’s an ingredient you love using?
It’s heirloom corn. We source our corn from a great importer in Mexico City called Tamoa. We started working with them at Oxomoco and from them learned that the price of corn has gone down so much in the US that it affects Mexico greatly. Farmers on mountains outside of Oaxaca or outside of Mexico City have been growing corn for generations, and they’re getting priced out. Tamoa came around, set up a fair trade scenario where we can pay more than the going price and the product is incredible and the people are fantastic. There’s all different varieties, colors, and sizes of corn—purple, pink, gold, white. It’s very special and we’re proud of that.

We use the masa as a base to our pancake, which has incredible corn flavor throughout. We have fresh tortillas, chips for the guacamole, tostadas, tamales, and we’ve made a horchata out of the masa instead of using rice. Now we’re working on dessert. 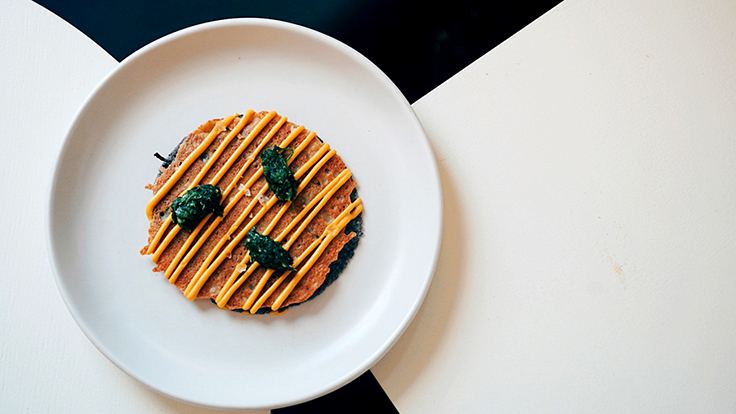 Is there a meal or experience you had that inspires you in the kitchen?
It was always in my DNA to eat well. My dad’s side is Italian-American and my mother’s side grew up in Missouri. My mother’s side grew vegetables in their backyard, canned tomatoes for the winter. Those tomatoes would then go to my dad’s side of the family to make tomato sauce for these Italian feasts. My grandmother would make pizza, pasta, ravioli from scratch. Any family gathering we had was based in the kitchen. That’s where we gravitated. You’re eating lunch and talking about what’s for dinner; you’re eating dinner and talking about what you’re having for breakfast. It’s always been deep in my family to be eating. To always have those smells around the house growing up was important and meaningful.

I had a great aunt, her name was Toot. She’d make this chicken-based noodle dish with a hen boiled for half a day to make this incredibly stock. I’d forgotten about it for years. But I was working at Jean-Georges as a line cook, and when they'd take that chicken stock off and cool it down, it was the  exact same smell as what came out of my great aunt’s kitchen.

What's your favorite thing to cook at home?
Lately it’s been this kale pasta. Chop up a head of kale, boil it in your pasta water, purée it with some pistachio and parmesan cheese and some of the cooking liquid of the pasta water, and make this super green puree. Toss your noodles in that and finish it with some toasted pistachios. I have garlic chips that I always have on hand to sprinkle over the top, plus some more parmesan cheese and olive oil. That’s been sort of our go-to. Our son who’s almost 3 loves it.

Presented in partnership with S.Pellegrino