With a sunny amber hue and a singularly tart kick, cloudberries are unlike any other berry. "As a Swedish people, we say it's the gold of berries," says Emma Bengtsson, executive chef of New York City's two-MICHELIN-starred Aquavit. "You can't get a better berry. They have a freshness and acidity, but still have a natural sweetness to balance that. As soon as you try one, that memory will stick with you for life."

Sometimes referred to as yellowberry, salmonberry or bakeapple, cloudberries (rubus chamaemorus in Latin) grow in boggy areas of Arctic and subarctic regions, appearing for just a few weeks in the summertime. Starting out white and turning red, pickers know they're fully ripe when the berry reaches a golden colour. Prevalent throughout Scandinavia — where they are highly prized — cloudberries can also be found in the upper reaches of Britain and Ireland, the Baltic states, northern Russia, Canada and Alaska. Generally, they only grow in the wild and need to be foraged, though efforts are being made to cultivate them commercially. 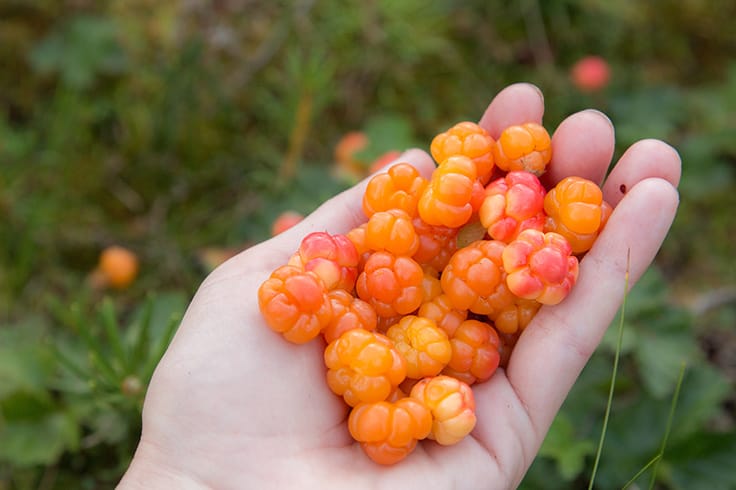 However, cloudberries are a rarity outside of Europe. "I've only seen it in a sweet, sugary jam at IKEA," says Bengtsson. Unable to source fresh cloudberries in the United States, she is forced to settle for frozen fruit. "[It's] an annoyance, but you do the best with what you have."

They arrive in five-pound buckets, which set her back about $400 each. However, the true cost is even more. The fruit has less than a 50% yield due to the fact that the berries have large seeds that need to be removed. Processing the fruit's flesh is a delicate procedure. "If you overturn them in a mixer, it gets very bitter and it takes on a greyish brown colour," she says. "Neither of which is very appealing."

George Mendes, executive chef of one-MICHELIN-starred Aldea in New York, first tasted cloudberries at noma and while visiting food festivals throughout the Nordic region. "They stayed in the back of my mind," he says. "Us chefs are always looking to be surprised, and cloudberries [do just that]." Now he is using a cloudberry jam as a glaze on salt baked Badger Flame beets to go with seared scallops. "The jam contributes a citrusy note," he says, "and adds a tartness, like a lemon or a lime."

Noodles Recipe Macau
All articles of Dining In