The tip-to-tail movement isn’t new, but some chefs have found another oft-overlooked cut to obsess over. Necks and collars from a range of animals of all types—from pork necks to salmon collars and many creatures in between—once simply ended up in charcuterie or were tossed into the stockpot, but now they are being treated with the same creativity and care as well-known prime cuts. No matter what animal they’re sourced from, the meaty cuts are full of flavor and fat, allowing them to be utilized in a variety of creative presentations. And since they have yet to reach the same cult status as cuts such as short ribs or oxtails, they are usually relatively easy for chefs to source—once they convince their butcher or fishmonger that they’re worth setting aside.

“The neck is my favorite part of the pig,” says executive chef Emma Bengtsson of the two-MICHELIN-starred Aquavit in New York City. “It’s such an undervalued piece of pork.”

She doesn’t use necks from just any breed. Hers come from Mangalitsa pigs, dubbed the Kobe of pork by some. “You get great marbling with the fat running through the neck,” Bengtsson says. “It looks like a lot of fat, but it melts in your mouth.”

To prep the unctuous cut—which has been a staple on her menu since she joined the restaurant five years ago—she brines it for five days in a solution packed with pink salt, brown sugar and aromatics. It’s cooked sous vide for anywhere from 12 to 48 hours before getting grilled over charcoal to order. Bengtsson currently complements the hyper-tender meat with rutabaga purée, wine pickled plums, peppery crumble and pearl barley. “Some of our guests have no idea what it is,” she says, “but they trust us, so they’re willing to try it.” 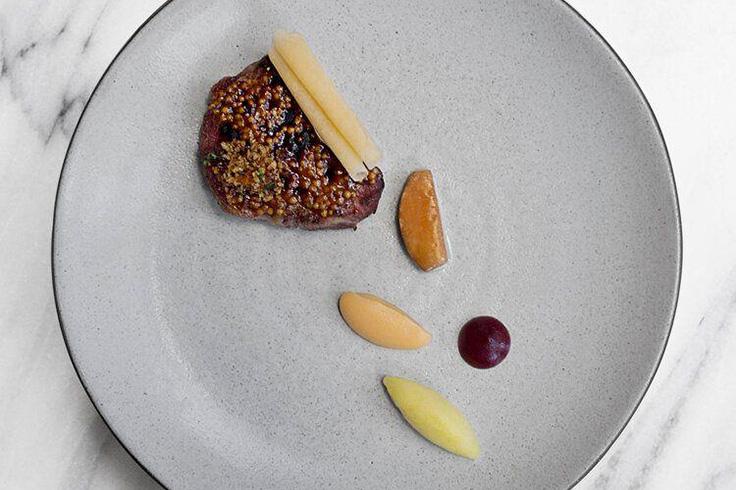 Bengtsson isn't the only chef touting the wonders of pork necks to willing diners. At two-MICHELIN-starred Lazy Bear in San Francisco, chef and owner David Barzelay has served the cut under its Italian name, coppa. “It has the perfect mix of fat and meat, with the fat distributed in striations that keep it tender and juicy when braised,” he says.

For his dish, the meat was cut into smaller pieces, brined, rolled into torchons, braised sous vide, sliced into medallions and then seared hard to finish. Glazed with apricot preserves, the coppa was complemented by spring onion soubise, quick-fried chiffonade collard greens and pork-apricot jus.

Pigs aren’t the only creatures sticking out their necks. The Bay Area’s Village Sake serves grilled yellowtail collar with ponzu for dipping. Bellwether in Long Island City showcases braised lamb neck in a pappardelle preparation with smoked butter and fava beans. And chef/owner Greg Baxtrom of Olmsted in Brooklyn is about to put a lamb neck dish on the menu inspired by a recent trip to Saudi Arabia. The cut is marinated, braised and grilled before being served with smoked freekeh accented with Arabic curry powder, Turkish flatbread, spicy pickled eggplant and lemon labneh.

One of the nicest elements of pork necks that most chefs won’t mention? Their price.

“They’re so cost efficient,” Bengtsson says. “So, I hope they don’t get hyped up too much. I like to think of them as my secret.”