On 14 November 2020, Michelin officially unveiled its restaurant selections for the MICHELIN Guide Seoul 2020 guidebook in a two-part celebration held at the luxurious Walkerhill Vista Hotel Seoul.

For the first time in history, two restaurants serving Korean cuisine received the two-star recognition in the fourth edition of the Seoul guide, bringing the city’s total count of two-star restaurants to seven.

Among the total of 31 restaurants that received star recognition in the MICHELIN Guide Seoul 2020 selection, seven restaurants were bestowed with one star for the first time. The city’s two three-starred restaurants, Gaon and La Yeon, both retained their status again this year.

New to the two-star category of restaurants “worth a detour” are Mosu, an innovative Korean restaurant, where MICHELIN inspectors were particularly impressed by chef Ahn Sung-jae’s signature dehydrated burdock dish, and L’Impression, an innovative restaurant where chef Chef Seo Hyeon-min conducts cross-boundary explorations of flavour while sticking to his Korean roots.

The seven new one-star restaurants represent a wide diversity of cuisines, from the French traditions at Auprès, Votre Maison and Pierre Gagnaire to the modern Spanish fare offered by Terreno and the innovative cuisine by Evett’s Australian chef Joseph Lidgerwood. Finally, Onjium and Myomi put the spotlight on local Korean flavours. 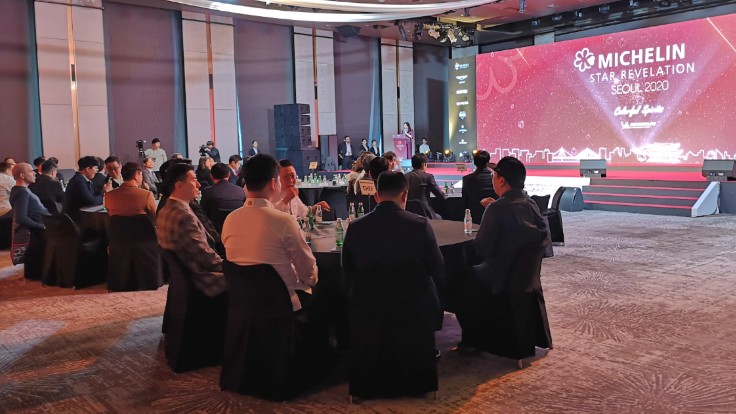 Invited chefs eagerly await their turn to be called up on stage during the Star Revelation Ceremony.

“Seoul is a city like no other,” the MICHELIN Guide’s International Director Gwendal Poullennec noted in his opening speech at the Star Revelation Ceremony. “Year after year, our inspectors are delighted to see an increase in high quality cuisine offered by the establishments of the city, and an evolution in the style of cuisines offered.”

Korean cuisine is harmoniously balanced between ancestral traditions and new innovation, Poullennec said, and MICHELIN inspectors were impressed with how chefs have interpreted their Korean heritage in boundary-breaking new ways. 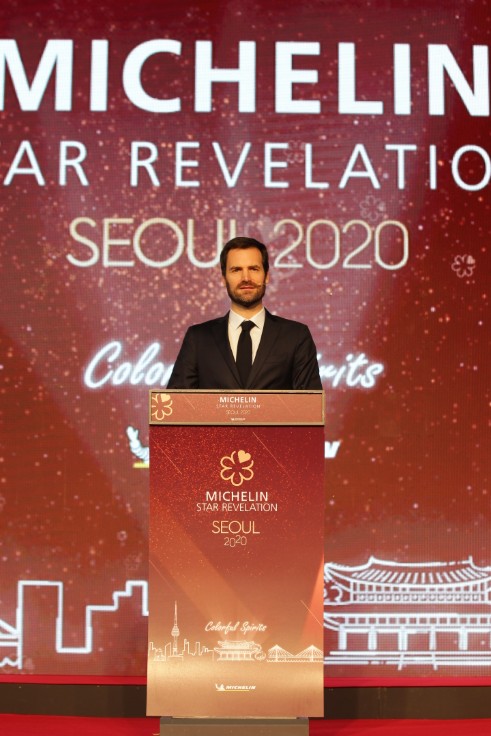 “This creative mix between modernity and tradition seems to be the recipe for the creation of flavourful wonders here in Korea,” he added.

In the four years since the guide’s launch in Seoul, Michelin has “continued to pursue its mission with the same passion and independence as with every other place in the world,” Poullenec said of Michelin’s inspection process, which follows a “unique methodology based on universal criteria and a deep-rooted independence”.

“We do not trust anybody except our inspectors to evaluate restaurants. Awarding a restaurant with one, two or three stars is important and it is never a single-person decision. That is what we owe to the customer who trusts us,” he stated.

Food aficionados around the world were able to catch the entire Star Revelation Ceremony live-streamed in the comfort of their homes thanks to Naver, the Official Digital Partner of the MICHELIN Guide Seoul. This year, global gourmands will also be able to discover all the eateries that make Seoul such a culinary hotspot on the MICHELIN Guide’s online platform. As soon as the Seoul stars were revealed, the full selection was made available for Internet users on the MICHELIN Guide global websites both in Korean language and in English. 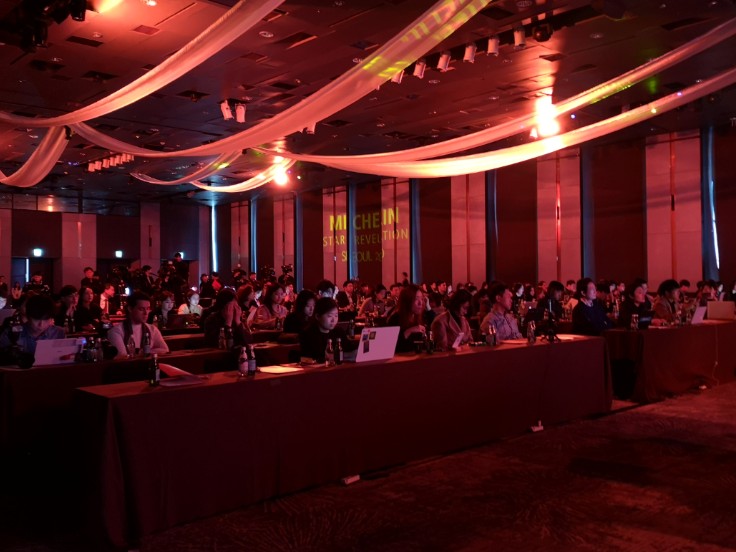 After the anticipation-filled Star Revelation Ceremony, the newly awarded restaurant chefs put on their MICHELIN chefs’ jackets and rejoined the city’s most influential hospitality industry professionals, gourmands and VIPs for part two of the day’s festivities: a lavish celebratory dinner held at the Vista Walkerhill Seoul’s Vista Hall ballroom. 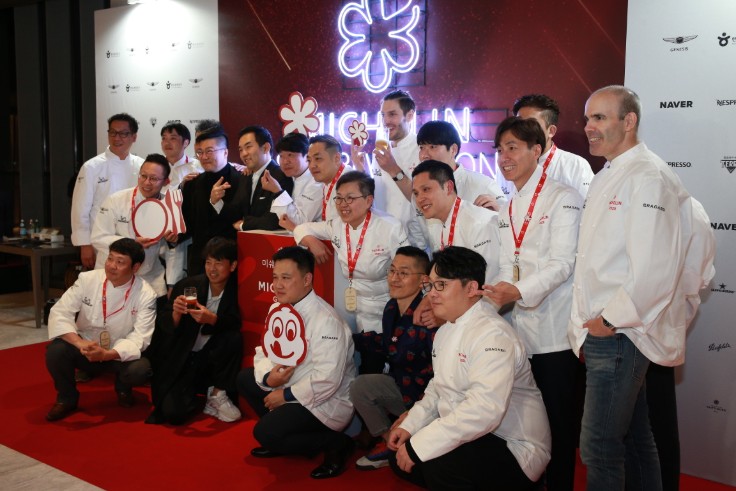 Chefs from one, two and three-MICHELIN-starred restaurants in Seoul pose for a group photo.

As the sun set over the South Korean capital, guests arrived to the sight of the latest models of G70 and G90 luxury sedan cars by Genesis on display at the ballroom entrance and mingled over welcome coffees prepared by Nespresso, refreshments by San Pellegrino, and refreshing Terra lager beers, a popular new beer from local South Korean distillery HiteJinro. 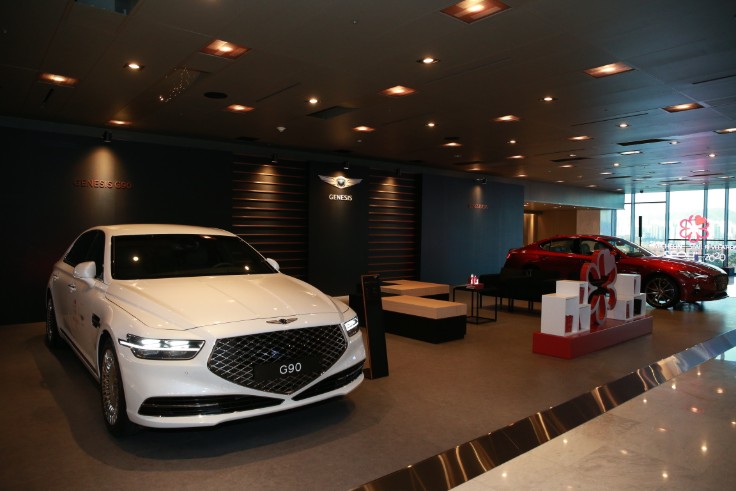 The G90 and G70 luxury sedan models of Genesis on display at the Vista Hall ballroom foyer.

Juheang Lee, Managing Director for Michelin Korea welcomed guests with an opening speech highlighting Michelin’s core philosophy of providing driving pleasure and enhancing mobility ever since the company was established more than a century ago. Compared to the inaugural 2017 edition, the 2020 edition of the MICHELIN Guide Seoul has seen a 29 per cent increase of starred restaurants and 67 per cent increase in Bib Gourmand restaurants. The the total number of restaurants featured throughout the guidebook has increased by 22 per cent, Lee revealed. 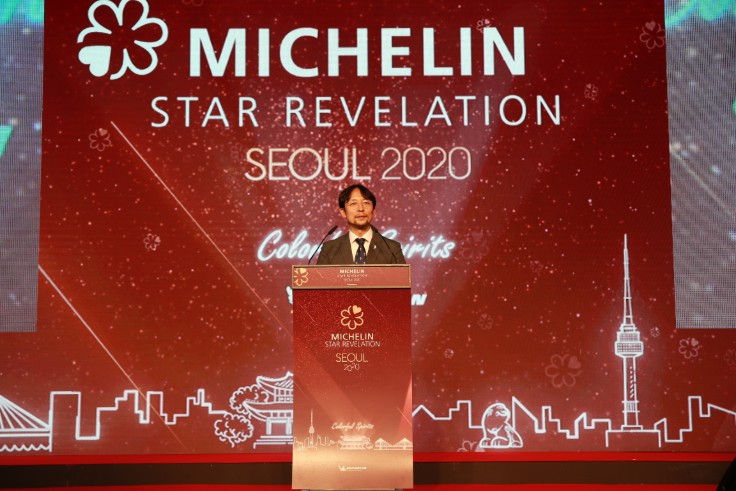 William Lee, Global Head of Genesis, shared with the audience his memories of food while working in the US and Brazil and the special importance of a dining experience particularly when shared with family and friends. The luxury car brand has been a partner of the MICHELIN Guide Seoul ever since its launch and he is glad to see the brands growing together with the same values and goals, Lee added. French Ambassador to the Republic of Korea and a special guest of the evening, Philippe Lefort, also took to the stage to offer his congratulations to the newly awarded chefs.

Cooking specially for the evening were James Park, the Korean head chef of one-MICHELIN-starred Muoki, and Italian chef Denis Lucchi of newly recognised one-MICHELIN-starred Buona Terra in Singapore. They collaboratively designed a six-course dinner menu according to this year’s gala theme, Colorful Spirits, which highlights the passion, innovation and creativity and the differences among chefs that make up the diverse kaleidoscope of Seoul’s gastronomy. 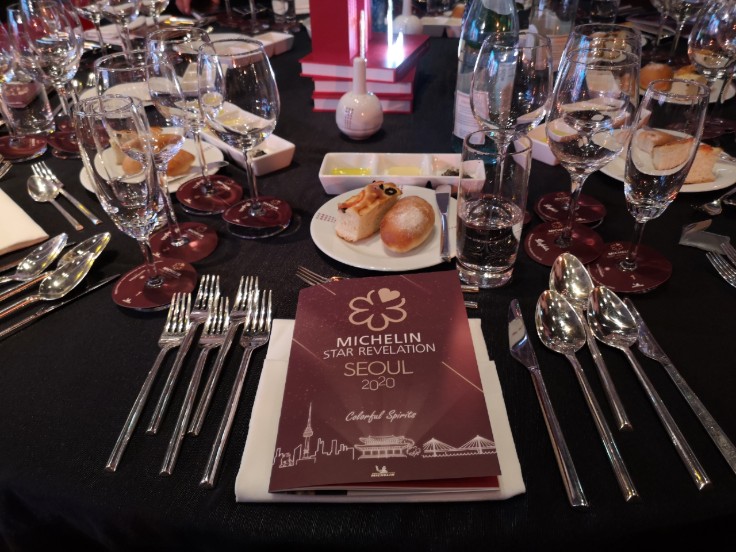 Diners were treated to a 6-course menu put together by Muoki chef James Park and Denis Lucchi of one-starred Buona Terra in Singapore.

Chef Lucchi further impressed guests with the next course of saffron risotto prepared with Jerusalem artichoke and veal jus accentuated with the infusion of Nespresso’s premium Kenya Milima coffee, while Chef Park’s main course of Grilled Korean Striploin Beef with cauliflower puree brought the meal to a crescendo. The courses were thoughtfully paired with flutes of Taittinger Comtes de Champagne Blanc de Blancs 2006, and exclusive pours from Penfolds such as the Yattarna Chardonnay 2015, the BIN 138 Shiraz Grenache Mataro 2016 and the BIN 389 Cabernet Shiraz.

Acclaimed South Korean performers, the Poolim Trio treated guests to a lively instrumental fusion music performance as they wined and dined, ending the event on a high note. The night went down as a colourful one for everyone to remember, as music, laughter and celebratory toasts resonated all around the ballroom long and late into the evening.

As the Michelin Guide's Asia Editorial Director, Debbie Yong manages digital content strategy and production for the guide's platforms across the region. Raised in Singapore, educated in the US and UK, and now based in Hong Kong, she loves her char kway teow and char siew as much as her croissants and charcuterie.

A rare summer delicacy, the Pyeonsu has been overshadowed by other more popular forms of the dumpling.

All about Bib Gourmand

The Bib Gourmand—named after Bibendum the Michelin Man, the friendly official mascot for the Michelin Group—is a non-starred rating category which recognizes...