Ask anyone in the world about Thai cuisine, and the conversation is likely to turn to the kingdom’s ripe mangoes: aromatic and golden, likely paired with a mound of sticky rice topped with coconut cream. Indeed, the local dessert khao niew mamuang now enjoys global popularity, in keeping with mangoes’ reputation as the most sought-after fruit in the world.

First grown in India 5000 years ago, mangoes have long sparked the fancy of gourmets throughout history. The very word “mango” — said to have come from the Tamil word “man-kay”— was spread by the seafaring Portuguese, with the fruit’s iconic curved oval shape purportedly inspiring the now-famous paisley pattern which originated in Persia. 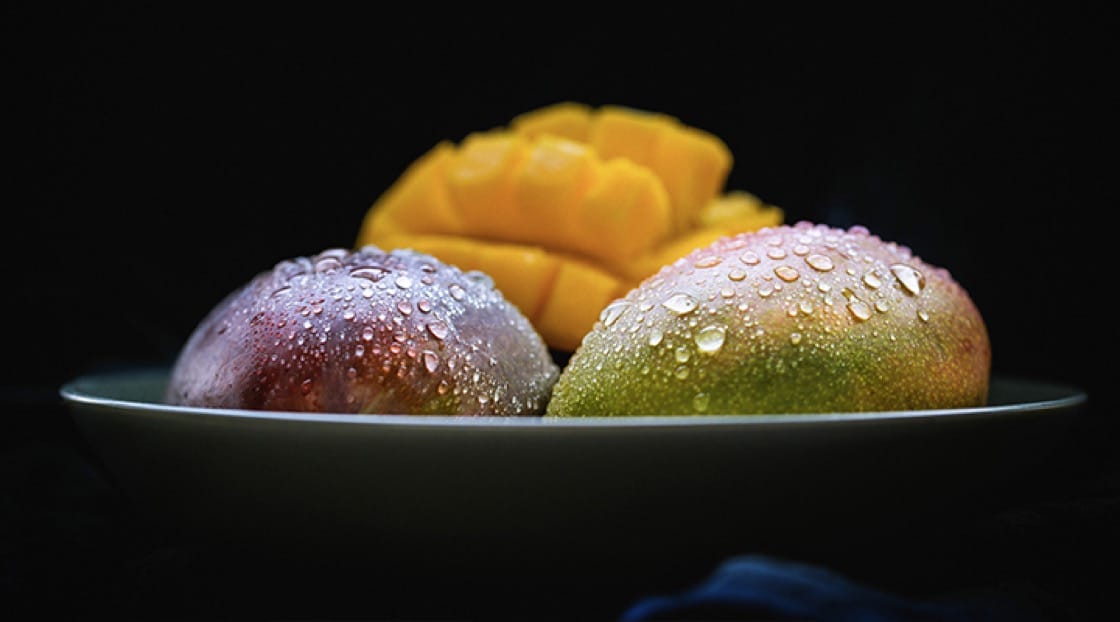 The mango soon took hold across Asia as a relatively easy fruit to grow with many uses. The fruit is high in fibre, antioxidants and vitamins A and C. Studies have shown the mango to be useful in issues with constipation, as well as in curbing obesity and reducing inflammation. Thais have long believed that even the young leaves — frequently eaten with nam prik, or chilli paste dip — carry health benefits, such as for pain relief and in stopping asthma attacks.

The fruit and leaves are not the only prized parts of the mango tree. In the northeastern Thai region of Isaan, krok (mortars) made of mango wood are particularly prized as they are considered inherently aromatic and of the perfect hardness with which to pound the region’s famous som tum, or grated salads. Typically made with julienned green papaya, the strands are supposed to be pounded just enough so that the sap is released, helping to distribute the dressing throughout the salad. In comparison, the granite mortars and pestles favoured in the central region are seen as too hard to pound these salads, turning them into an unappetising mush. 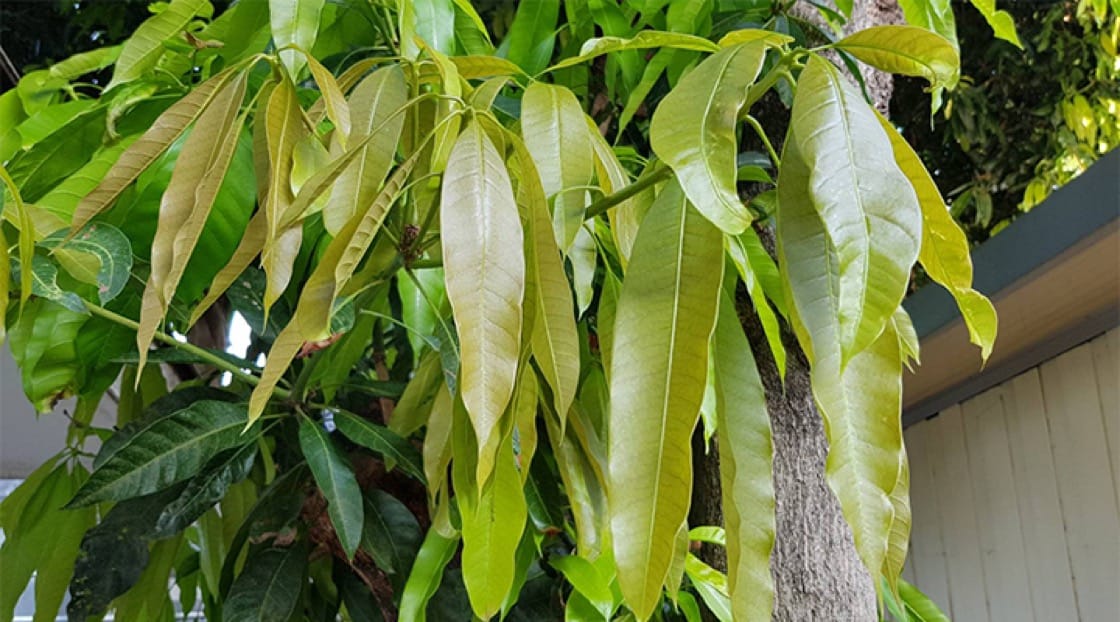 Although today’s technological advances allow markets to sell ripe mangoes (mamuang sook) year-round, the peak season for this fruit remains Thailand’s “hot season” between March to May. More than 200 varieties are grown in Thailand, helping to make the Kingdom the world’s third largest mango exporter behind India and China. While mango’s ubiquity stems in part from the ease with which it grows throughout the country, the best regions for the fruit are Chachoengsao, Ratchaburi and Nonthaburi.

“Mango trees begin to flower in December, so April-May is the peak time,” said Chin Chongtong who conducts Thai cooking classes as well as food tours. “Some gardeners can grow mangoes out of season, but they do not taste as sweet as when they are in season.” 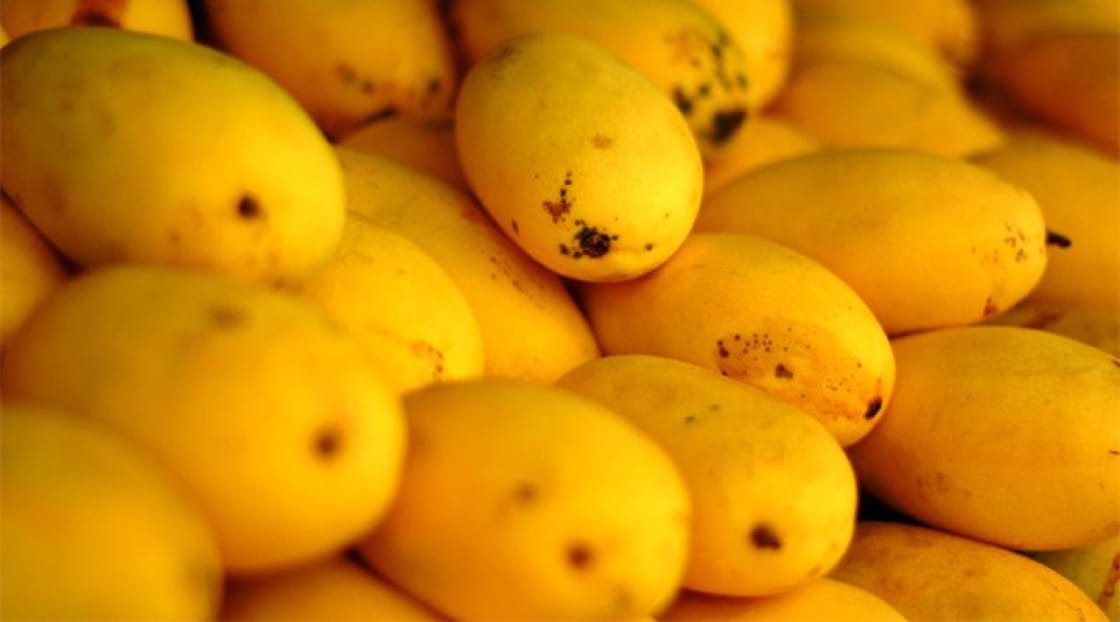 Nam dok mai mangoes like these are in season in Thailand from March to May. Photo: "Yellow Mangoes" by Lemuel Cantos is licensed under CC BY 2.0.

Not surprisingly, mangoes thrive in tropical weather. Mango trees take root easily, even in soil that is not considered particularly fertile. Once the seedlings begin to sprout, they do not require much care or attention, hence the ease with which they proliferate. Once fully grown, the trees themselves can grow to 35 metres tall, shooting out small, aromatic yellow flowers when in full bloom.

Most Thais are familiar with the sweet and juicy nam dok mai mangoes (the most popular variety, known internationally and sold year-round), but aficionados of the fruit typically prefer the pale yellow ok rong variety, which can be more fibrous, but is also considered far more aromatic. 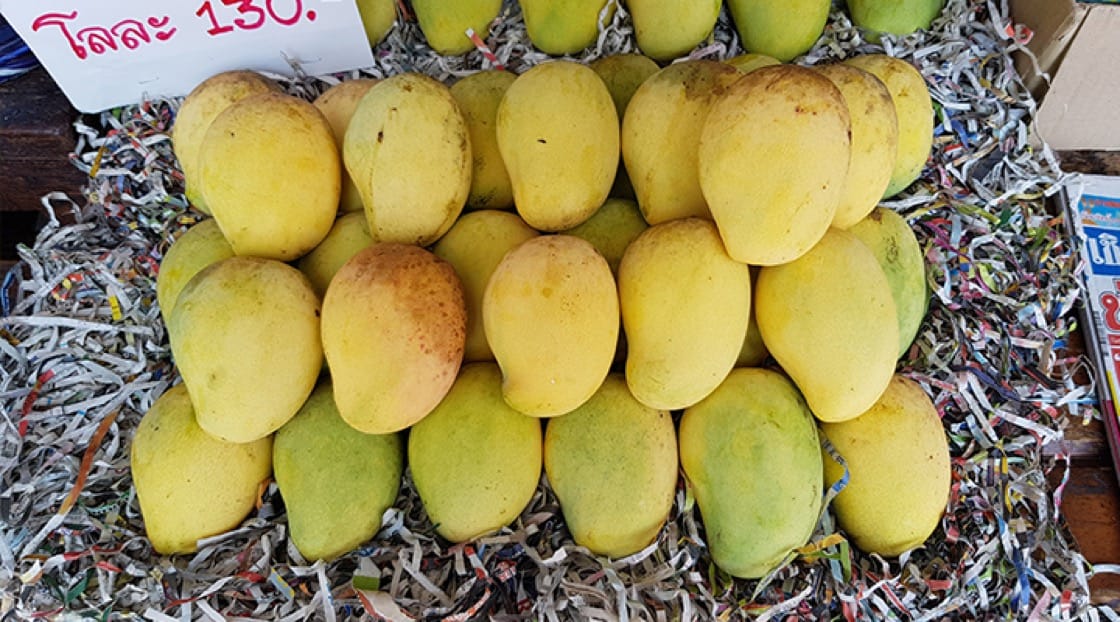 Other popular types include the mahachanok variety, a Thai-Australian hybrid considered by Thais as “the king of mangoes”. This type is so prized that local ice cream institution Nuttaporn (94 Phraeng Phuton Square) offers its own highly sought-after flavour made from the mango during the hot season.

But as popular as mamuang sook are, green mangoes (mamuang mun, best between October and May) also contribute largely to Thai cuisine.

They are grated in spicy-tart salads, accompanying greasy fodder such as deep-fried catfish, pickled in a sweet-sour brine as a drinking snack, or cut into shards and eaten with nam pla waan, a salty-sweet dip made with palm sugar, shrimp paste, fish sauce, shallots and chillies. By far the most popular green mango variety is kiew savoey, known for its pale green flesh and sweet-tart flavour, although the crunchy faa lan type also has its fans. 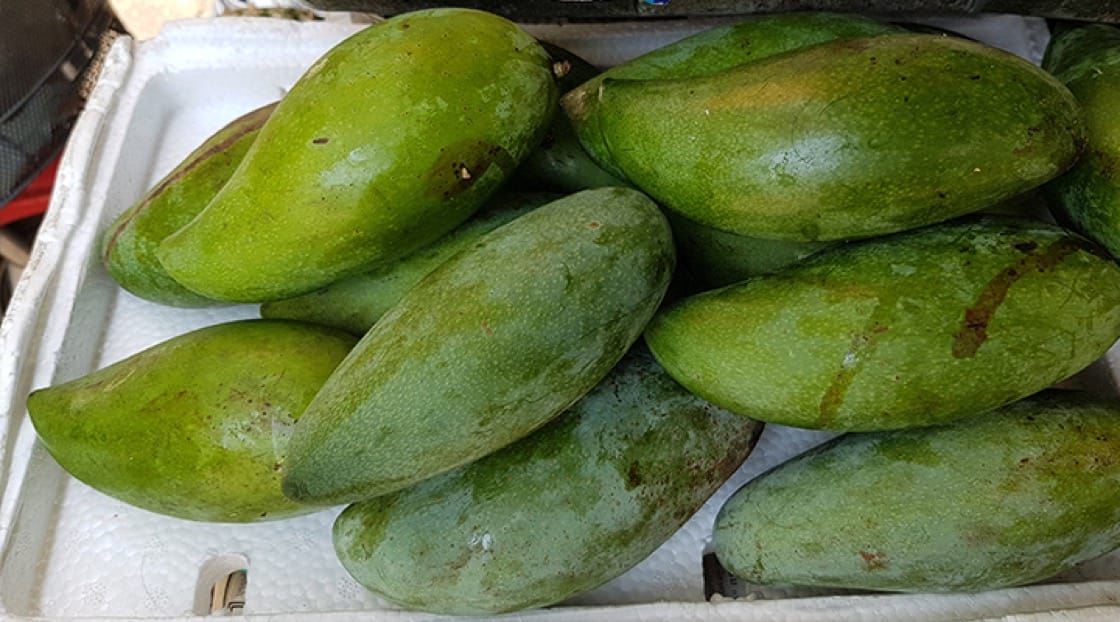 What everyone can agree on is that ripe mangoes are at their peak this time of year. But finding the best ones at the market does not necessarily mean picking out the most golden fruit.

“Some green mangoes can be sweet as well depending on the type,” said Chin, singling out ripe thong dam and kiew kamin mangoes as having green skins but sweet golden interiors. Heavily spotted mango skins indicate old age, so the fewer blemishes the better, or a light freckling of the skin at most. The skin should also be smooth; like people, mangoes wrinkle as they age. You can also tell a mango’s ripeness by touch and smell; the surface should be slightly soft, with a sweet aroma at the stem end of the fruit.

But Chin is also quick to add that it is important not to touch the mangoes yourself without permission. “Some vendors do not like for people to touch their mangoes, because it will blemish the skin,” she said. “Better to look for basic things, such as colour, spots, and type.” Instead, make sure to ask for a sample, and most vendors will oblige. 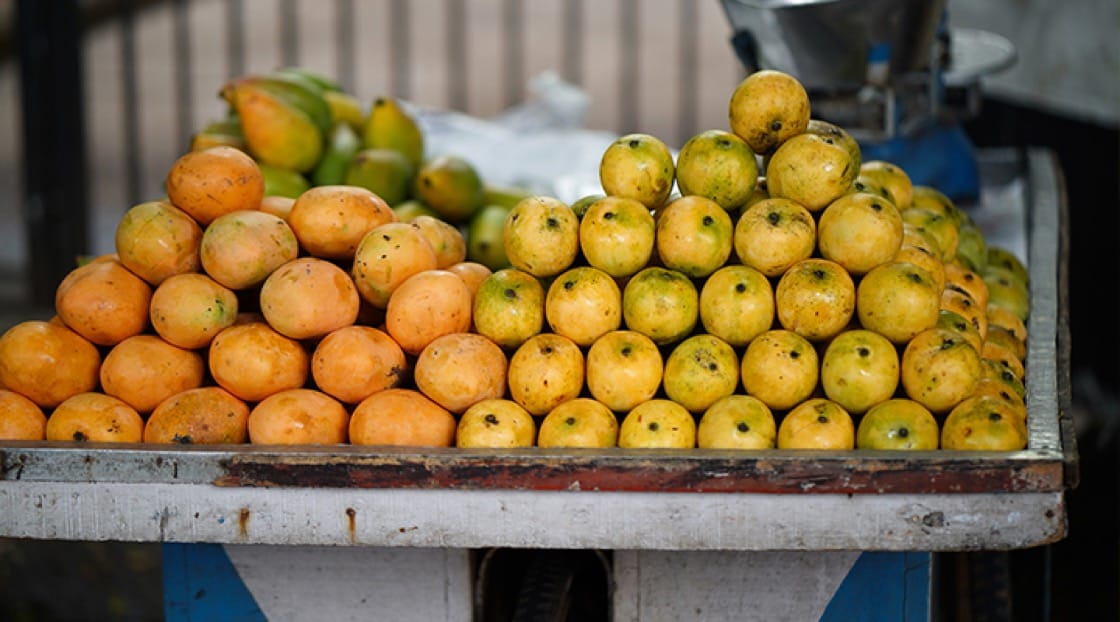 Fresh mangoes at the market.

If you are not looking to buy any mangoes yourself and are simply hoping to enjoy a professional take on the fruit at the height of its season, there are a plethora of restaurants that can accommodate. Michelin-starred molecular Thai specialist Sra Bua By Kiin Kiin (One Michelin Star) presents its own take on “mango sticky rice”, while Chef Bee Satongun of Michelin-starred Paste (One Michelin Star) uses green mango topped with minced chicken and ginger rolled in coconut as an appetiser. 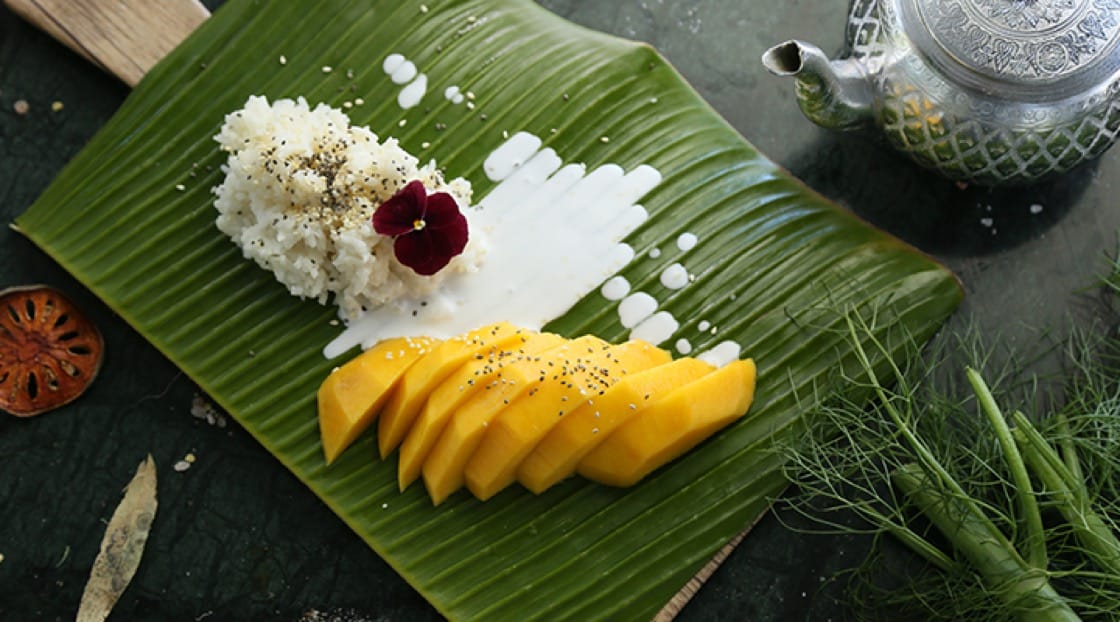