Tomorrow is March 14th, or Pi Day, a quirky calendar holiday dedicated to the mathematical concept known as pi, which is expressed with the numbers 3.14. Some clever minds in the food industry saw an opportunity and rebranded the day as pie day (not to be confused with National Pie Day on January 23rd), which should explain the surge of neatly crimped and golden pie pictures bound to appear on your social media feed.

Here are some restaurants in LA where our inspectors might end their meal with a slice of pie.

Chef/owner Jeremy Fox is known for seasonal, market-driven cooking so it should come as no surprise that the dessert menu at Rustic Canyon follows that same philosophy. The ever-changing seasonal tart (which is really just an open-faced pie) may be filled with a winter citrus curd or summer stone fruit, but it will always reflect what’s good at the market right now. 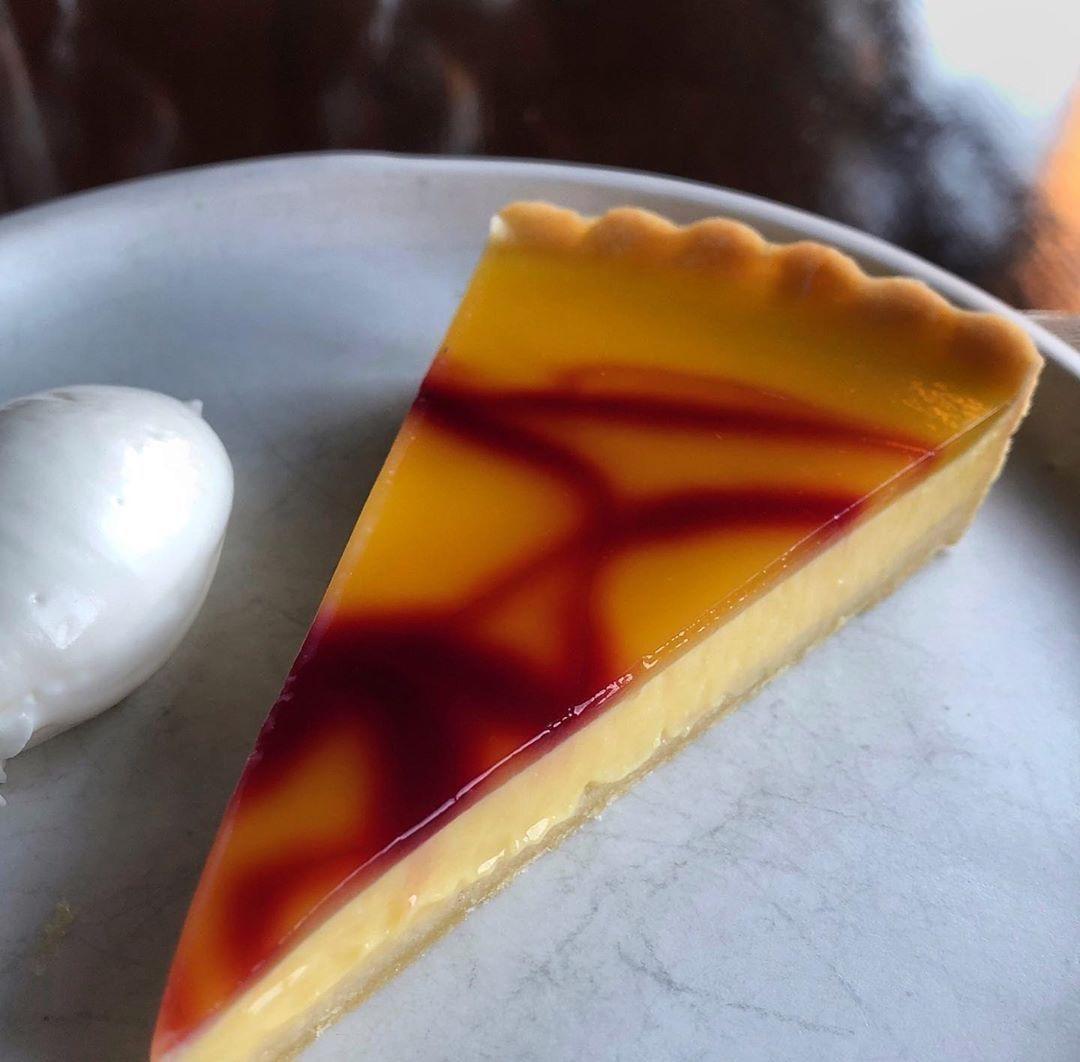 The butterscotch budino at Pizzeria Mozza is legendary, but Chef/co-owner Nancy Silverton’s gelato pie is what we’re after. Silverton started her culinary career in baking and pastry, and has spent considerable time perfecting her recipe for gelato (she even launched a line of gelatos called Nancy’s Fancy in 2015). At the restaurant, a graham cracker crust is piled high with silky gelato in flavors like strawberry or Meyer lemon. 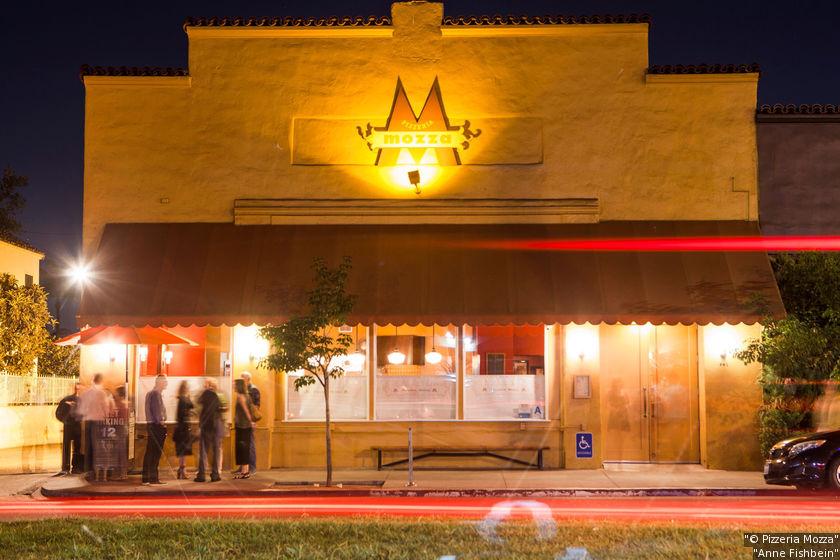 The dessert menu reads like a collection of greatest hits at this model of a French bistro in Hollywood, from chefs and co-owners Ludo Lefebvre, Jon Shook and Vinny Dotolo. You’ll find classic French pastries like a Napoleon sandwiching velvety crème pâtissière and a light-as-air chocolate soufflé. The apple tart for two may be a loose interpretation of pie—puff pastry topped with slices of meltingly tender apple, caramel sauce and a perfect scoop of vanilla bean-flecked ice cream—but it’s every bit as good. 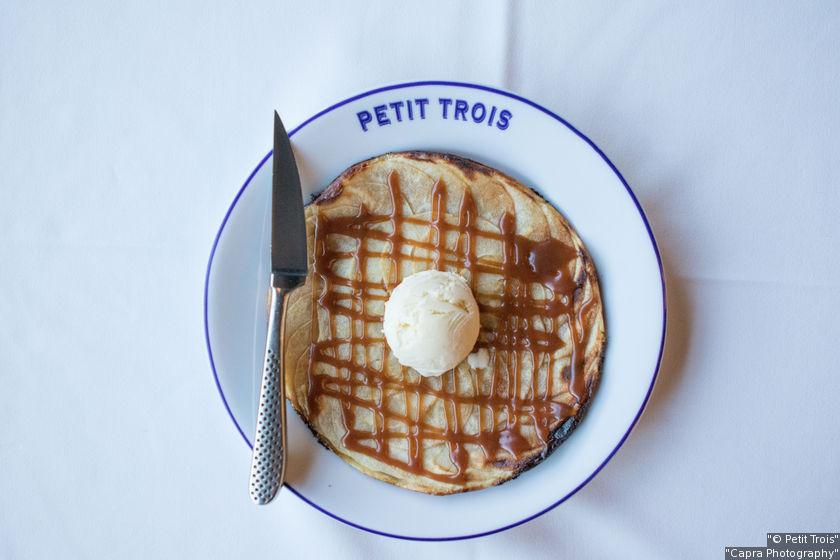 Langer’s Delicatessen has been LA’s top destination for hot pastrami on rye since it opened in 1947. The dessert menu is chock full of Jewish and American favorites from rugelach and noodle kugel to the hot apple pie a la mode. Cinnamon-spiked apples spill out of the buttery crust into a brandy-spiked sauce, and the whole thing is capped with a scoop of vanilla ice cream. 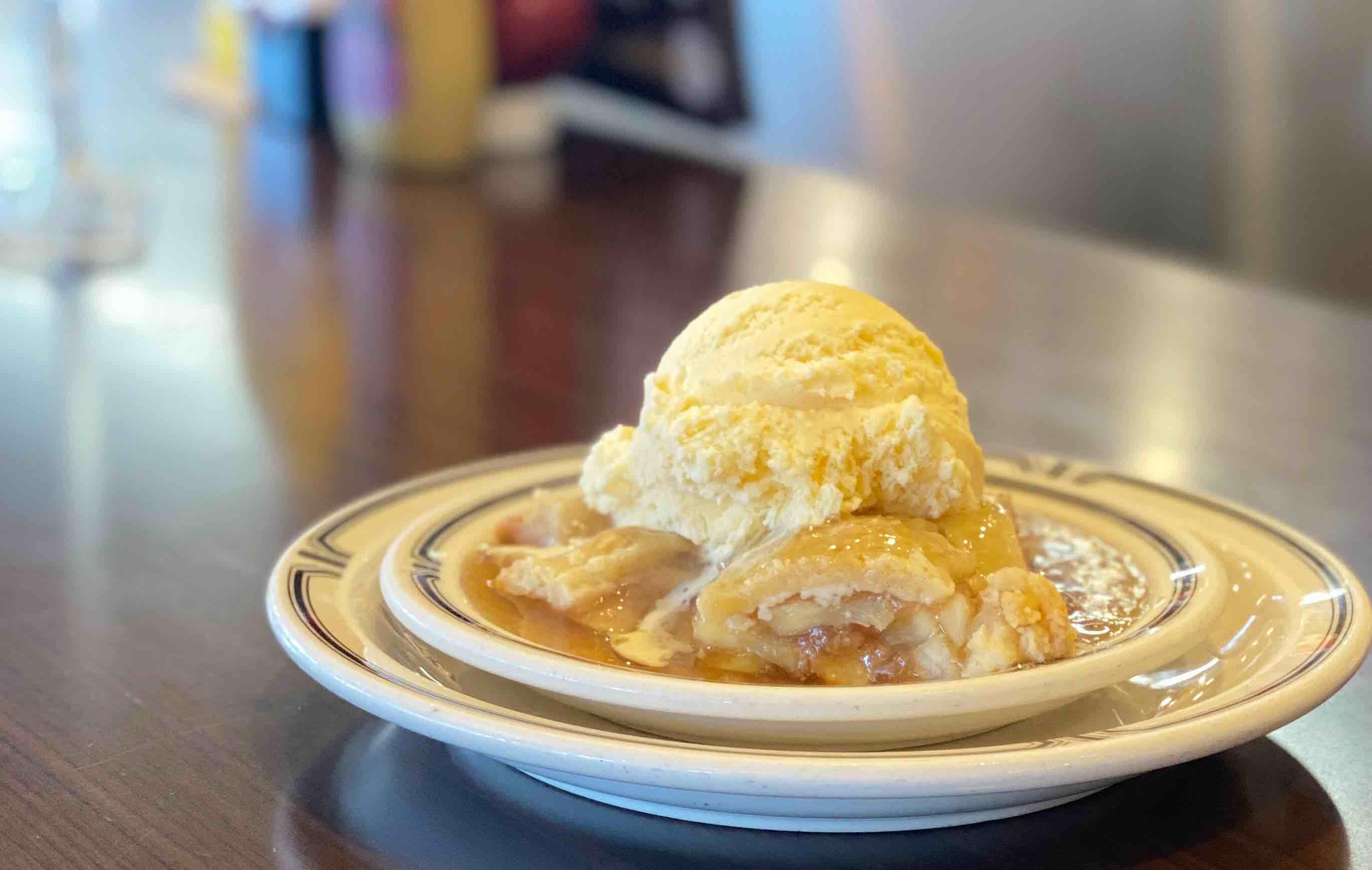 This steakhouse in Manhattan Beach might be a modern invention (it opened in 2015), but its menu and setting celebrates mid-century Americana. Shrimp cocktail and a dry aged steak might be preludes to a block of sticky-sweet pecan pie topped with smooth vanilla ice cream. 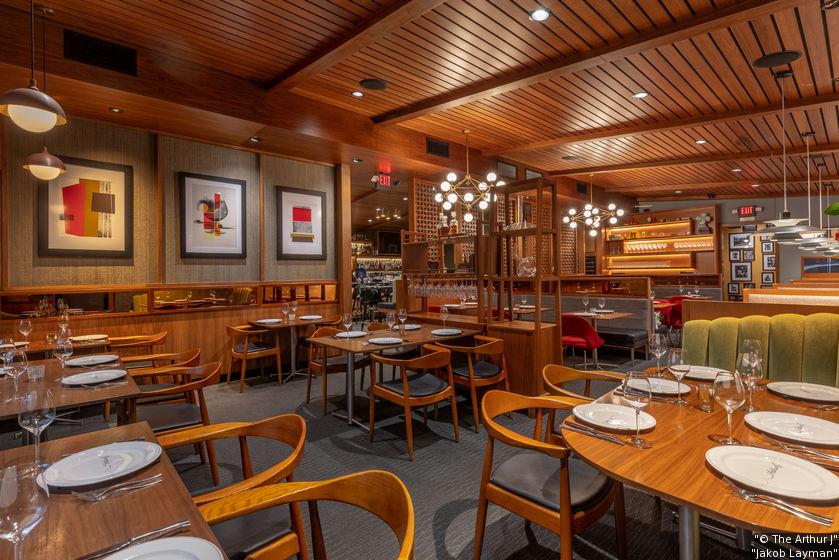 Chef/owner Michael Cimarusti is LA’s premier poissonnier. In contrast with his essential fine dining destination, Providence, Connie & Ted’s is Cimarusti’s more approachable ode to the sea. There is one pie on the menu—banana cream, a custard-y banana filling topped with a sky-high mound of cool whipped cream. 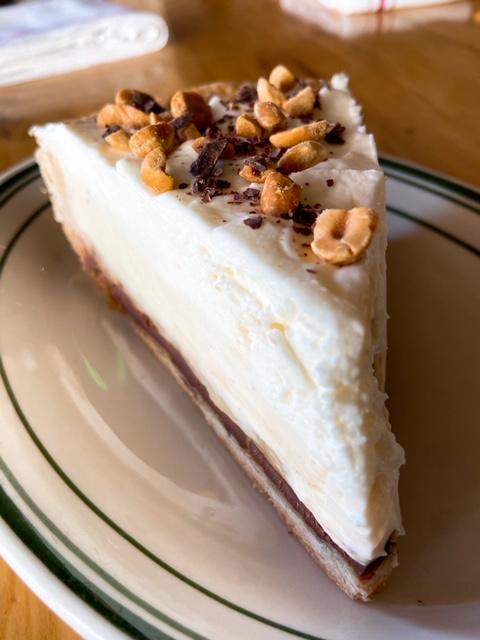 Luckily one of LA’s most in-demand dinners also comes with one of its most in-demand desserts. The much-loved chocolate budino tart by pastry chef and co-owner Genevieve Gergis is an individually-portioned tart shell filled with a silky ganache made from excellent bittersweet chocolate finished with crystals of flaky salt and a hint of olive oil. 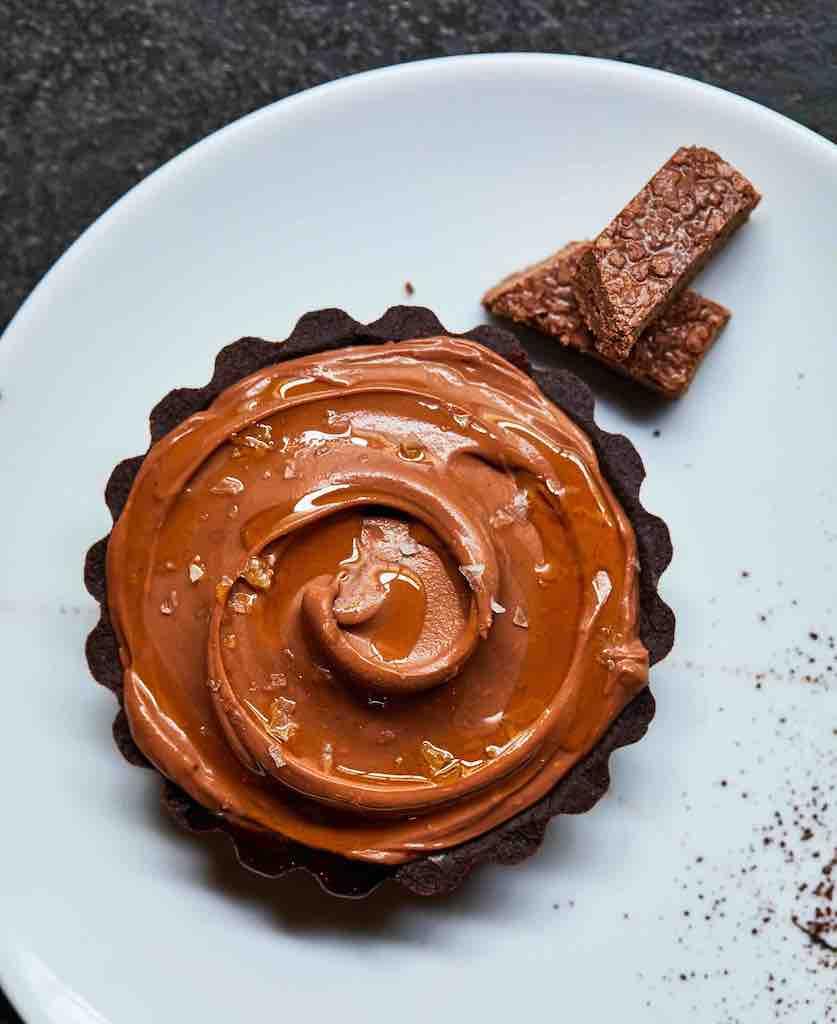 Photo by Ren Fuller for Bestia

Yes, there’s a tart on the dessert menu and there’s bound to be a pie or two in the daily display of pastries, but it’s the quiche that we’re spotlighting here. Because technically, a quiche is just a savory pie. At Republique, you’ll find it stuffed with kale, mushrooms and gruyere, and it is only available at breakfast or brunch. (Though we won’t hold it against you if you order a slice of pastry chef co/owner Margie Lorenzana-Manzke’s beautiful dessert pies, too.) 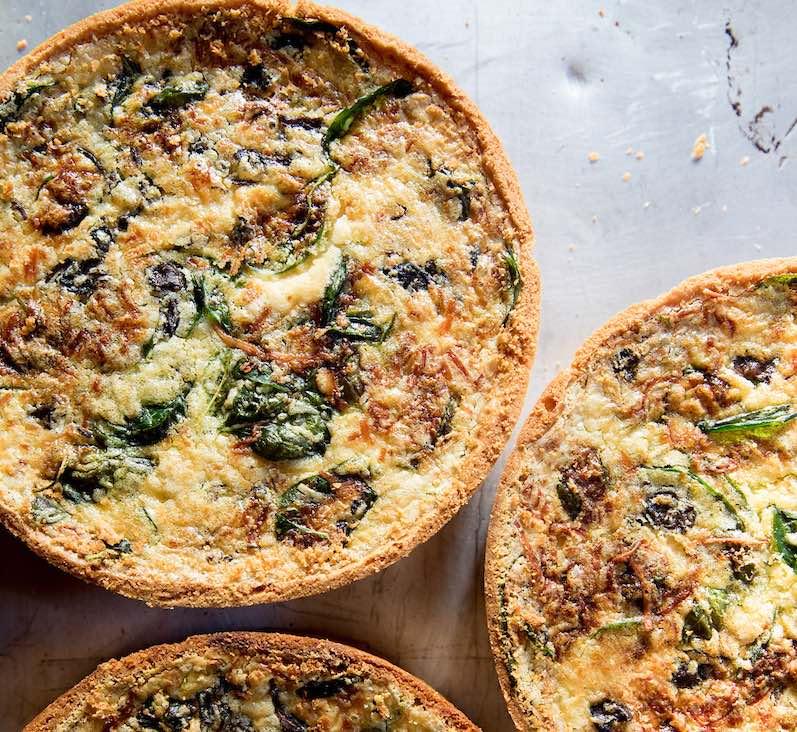 Trust the dessert magician and avant garde pastry chef Dominique Ansel to turn a pie on its head. At his café and bakery at The Grove, Ansel takes the best elements of an apple pie—buttery crust and spiced apple—and turns it into a cake. It’s a pie that isn’t a pie…but it still counts. 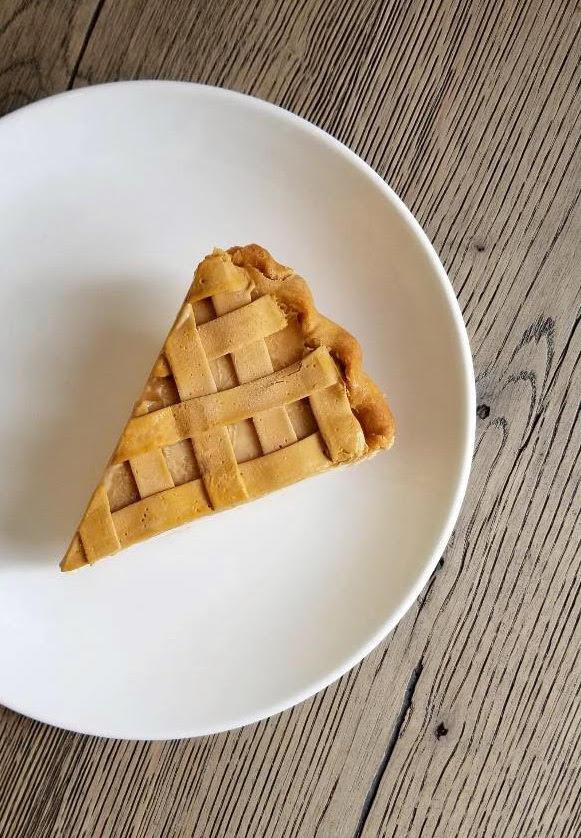 Photo courtesy of 189 by Dominique Ansel