“This is my dream, and this is my future” declared 14-year-old Eunji Lee after watching a television show about the life of a pastry chef at her home in Busan, South Korea. Fast forward to France for a decade of culinary studies and practical experience, and then to Manhattan where Lee is now executive pastry chef at the highly-esteemed modern Korean restaurant Jungsik. Her brilliant five-course dessert tasting menu, reflecting a Korean heritage, classical French technique, and New York know-how, is available nightly at the restaurant’s intimate bar, a progression of unusual flavor combinations in tune with the seasons of the year and chef/owner Jungsik Yim’s mission to reinterpret Korean cuisine. 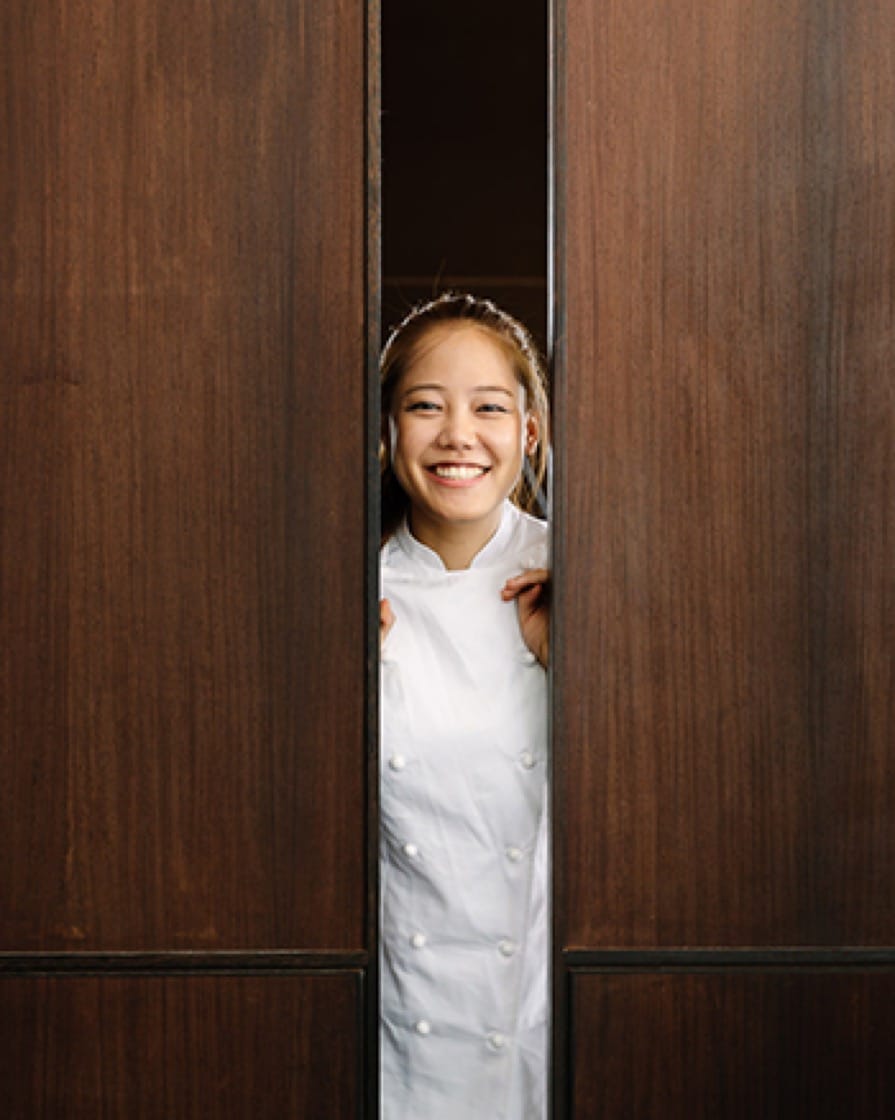 Diners are delighted to encounter unfamiliar ingredients like the Korean red berry Omija, a name that means five tastes, detecting notes of sweet, sour, salty, bitter and piquant, in the Omija juice that naps a scoop of lemon basil sorbet. There are surprises in every course, from toasted brown rice cream puffs to the whimsical “baby banana,” a trompe l’oeil presentation that showcases the chef’s creativity, artistic sensibility and attention to detail.

Lee’s odyssey from Busan to Jungsik began right after high school. “I enrolled in an academy to learn the French language for a few months,” she recalls, “and then I went to France right away,” heading to Rouen to study at the Institut National de Boulangerie Patisserie. After a visit to Strasbourg where Lee was charmed by the ambiance of the Alsatian region and its culture, she applied for an externship at one of the city’s a top bakeries, but was rebuffed—they claimed they didn’t hire foreigners. However, “if I have a passion I don’t stop,” Lee admits. “So I went again and again and they finally accepted me, and I did both bakery and pastry [there] for a year.” Her next destination: Paris, to attend the prestigious pastry school Ferrandi, and, after graduation, a three year stint at the Michelin-starred Asian-meets-French Ze Kitchen Galerie where she worked directly with chef William Ledeuil. “It was hard for me at first,” she explains, “but I learned a lot about using Asian ingredients and French technique; he taught me how to use savory ingredients like herbs and oils, saying ‘taste this, taste that,’ and I also learned discipline and organization.”

Seeking a more pastry-focused experience, Lee aimed high: a position at the Michelin-starred restaurants at Hôtel Le Meurice, the domain of acclaimed superstar pastry chef Cédric Grolet. After passing a series of tests that included preparing several desserts, Lee was accepted, starting as a pastry cook and rising in the ranks to sous chef during four years of close collaboration with Grolet.

Then, two years ago, it was time for a change for the poised young pastry chef with a ready smile. “I wanted to come to New York for my new experience,” says Lee—and Jungsik was the perfect fit. “It was my first job as a pastry chef where I could make my own desserts with the French techniques I learned.” 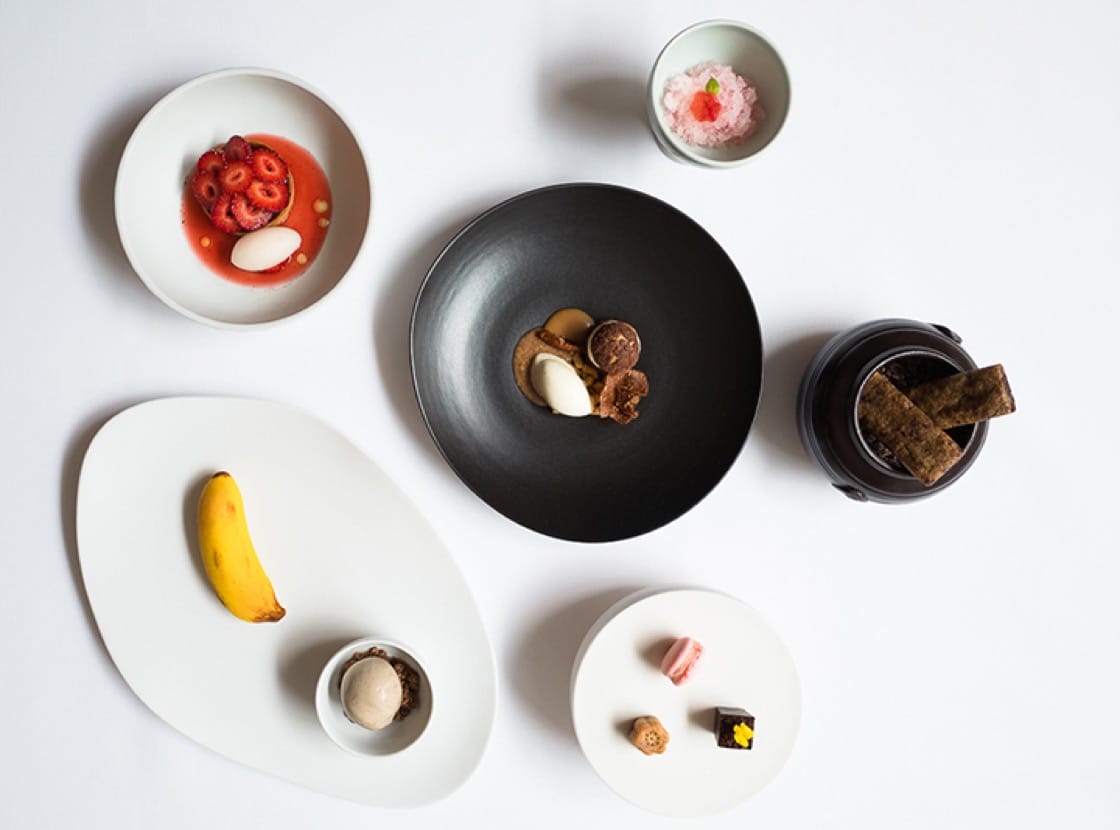 The dessert tasting menu at Jungsik in New York City.

There were adjustments: communicating with her staff in the English she had learned in Korea instead of in French; differences in staples like cream, butter and flour, and adapting to American tastes as well as ingredients. “The French love acidity, a sour lemon tart that is really lemony,” she notes, “while chocolate and caramel are favorites here.” All of those flavors are vividly incorporated into Lee’s panorama of sweets.

Currently, the Omija lemon sorbet is followed by a calamansi tart, with the citrusy notes of that Asian fruit balanced by sweet pineapple sorbet, coconut cream, and south Asian herbs like cilantro and lemongrass. De rigeur on the menu is Lee’s signature “baby banana,” a white chocolate shell shaped to resemble a piece of fruit that is filled with Valrhona Dulcey chocolate ganache and Bailey’s cake and served with French coffee ice cream and chocolate crumble. The fourth course is a riff on the Paris-Brest, a classic wheel-shaped cream puff confection, named for the bicycle race between those French cities. Lee playfully recasts it as NY-Seoul, a crunchy base of Korean short grain toasted brown rice cream puffs, topped with pecan praline and vanilla ice cream. 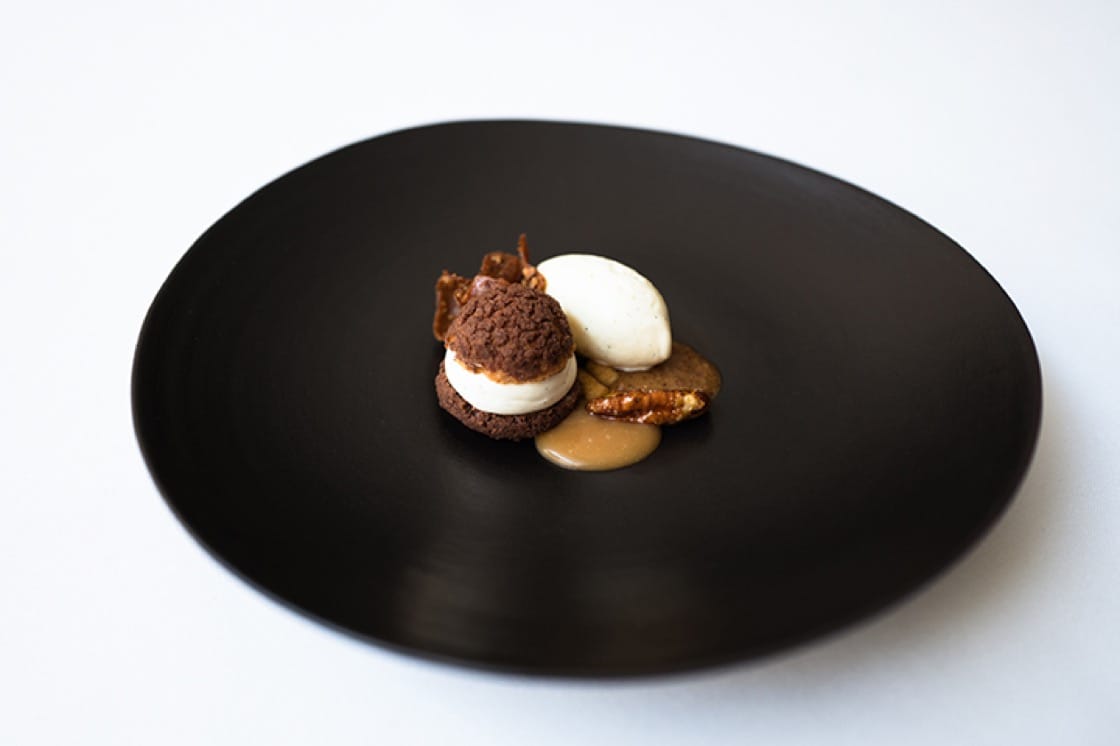 At this point in the tasting, there is an optional, extra supplement course for the sweet-obsessed: a chocolate waffle cone filled with truffle ice cream and topped with black truffle and fleur de sel. Those with more modest appetites—and budgets—move on to the finale of miniature petits fours, including a dark chocolate and ginger bonbon, black sesame macaron, and yakgwa, a popular honey and sesame candy, served in a traditional Korean clay pot. 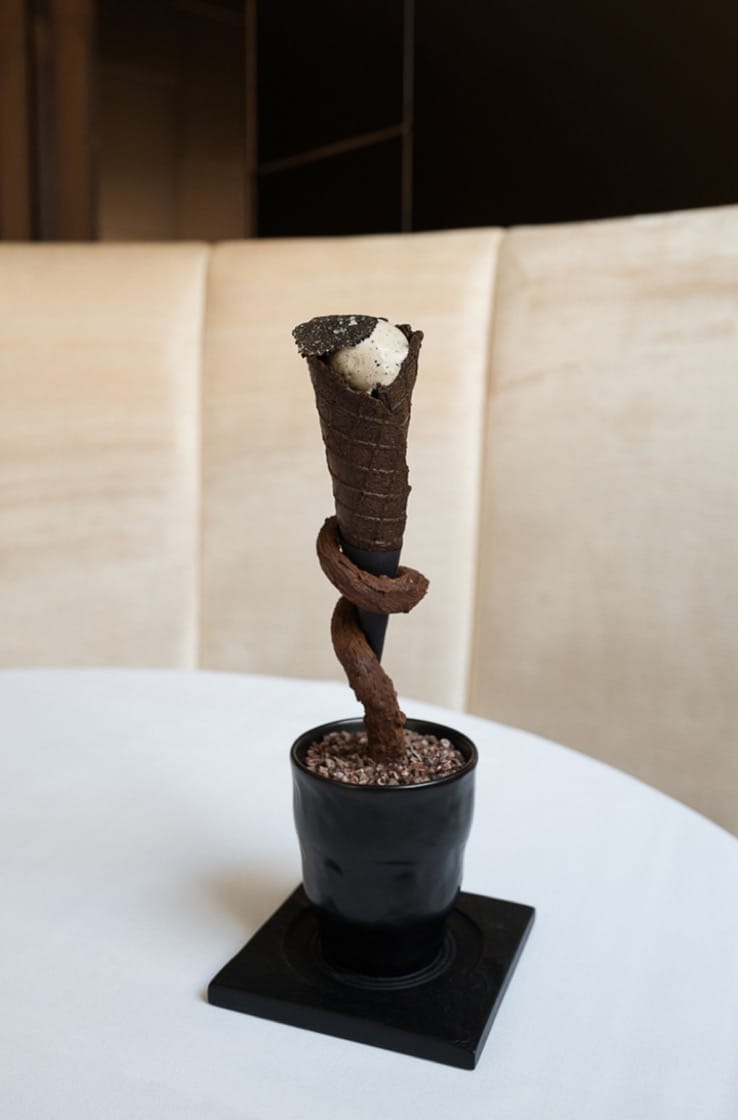 The decadent truffle cone is available as a $25 supplement.

While the dessert tasting menu has kept Lee busy in the kitchen, she was able to take a break last fall, returning to France to become the first non-European competitor on the popular TV series, Qui Sera le Prochain Grand Patissier? Lee made it to the finals in the contest to be chosen the next great pastry chef, and, in a close race, lost by only three points, 64 to 67.

But perhaps her stellar performance will be the inspiration for another teenager to dream, as she once did, about a future as a pastry chef.