At first sight it’s just a simple bakery storefront tucked under a black, red and white awning at 184 rue du Faubourg Saint-Honoré, in a chic Parisian neighborhood and a short walk from the French presidential palace. Those in the know—or intrigued by the names Dassaï and Joël Robuchon outside—venture past the pristine, white pastry display cases and up the few steps leading to a salon de thé with its cool black and white decor, 36,000 white tubes suspended like stalactites diffusing light overhead and, in the background, a glassed-in pastry kitchen. To the left lies a tasting bar lined with a forest of gleaming, backlit bottles, the majority of which contain—not wine—but sake. 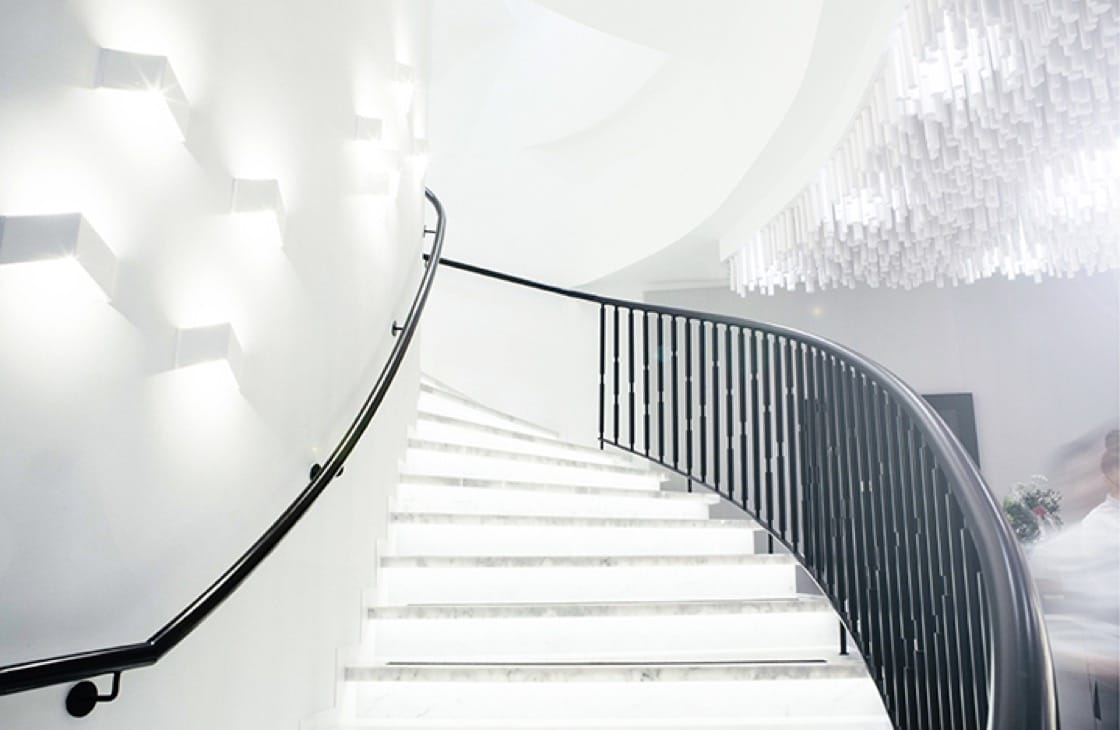 Head up the stairs at the recently-opened restaurant to find a sleek and cozy dining room.

And that’s not the end of surprises here. Climb the next flight of wide, curving white marble steps worthy of a Tim Burton fantasy at Dassaï Joël Robuchon, and you’re in a cozy dining room, sleek and relaxed and resolutely modern, its black and white décor reflected in a mirrored ceiling, all conceived by Spanish designer Pepe Cabrera. A new look for Robuchon, whose black and red interiors are the work of Pierre-Yves Rochons.

This three-story multi-function, dual-cultural space is the fruit of the Franco/Japanese collaboration between chef Joël Robuchon and Hiroshi Sakurai, director of Dassai, a prestigious brand of sake. It opened progressively during the month of May, without fanfare—a discrete roll-out characteristic of this grand chef, and of the culture of the rising sun that has influenced him for over four decades. 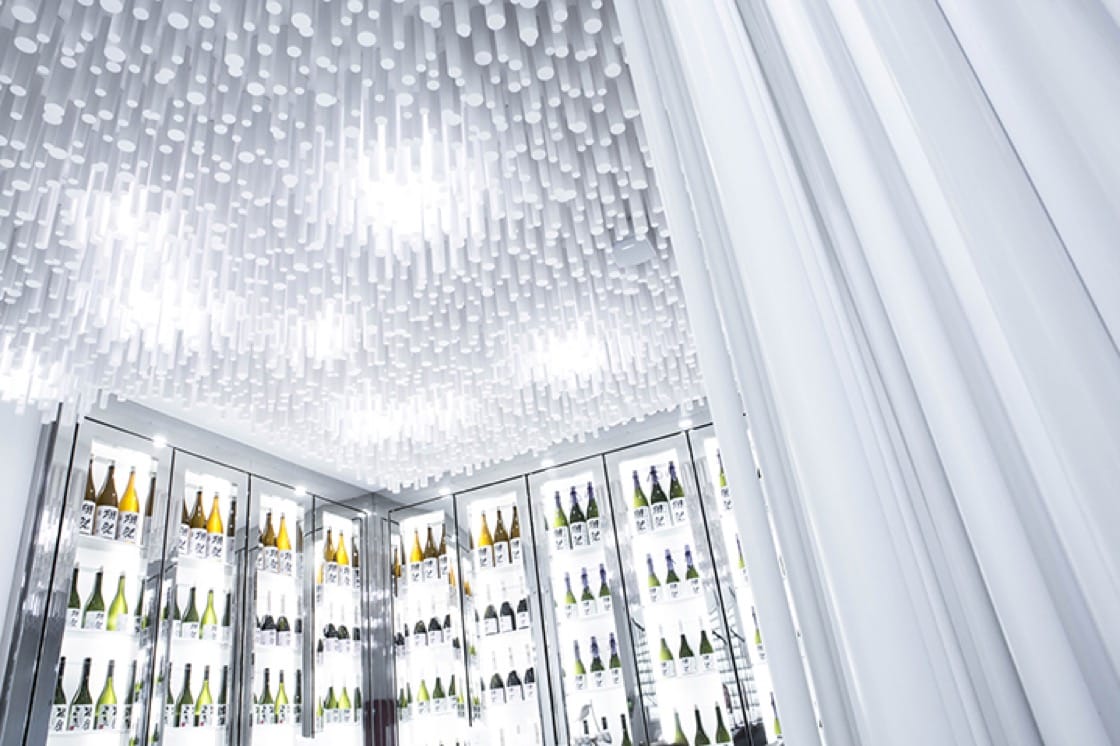 Robuchon and Dassai aim to showcase the great world of sake to local Parisians.

“I’m very attached to Japan. It has influenced my cooking, as well as my presentation, my respect for the seasons [and] the play of different serving plates,” explains Robuchon. “It seemed interesting to me to translate this inspiration to Paris.” The aim of the Robuchon/Dassai venture would be to share Robuchon’s Asian inspiration while introducing Parisians to the world of sake. “I’m in love with Dassai,” confides Robuchon. “It’s the best sake I’ve ever tasted.”

Mission accomplished with the first sip of Dassai’s Sparkling 50, a sake proposed as an aperitif before lunch or dinner in the restaurant. The surprising end result is a chilled, translucent milky white with delicate bubbles. A charming Japanese waitress/sommelier comes to your table holding a chart studded with rice grains of different degrees of polishing. For Sparkling 50, 50% of the rice grain’s shell is polished away to produce this beverage that’s likely to be the season’s revelation—a competitor to the trendy Aperol spritz. There is also a choice of French wines for those not yet converted to sake. 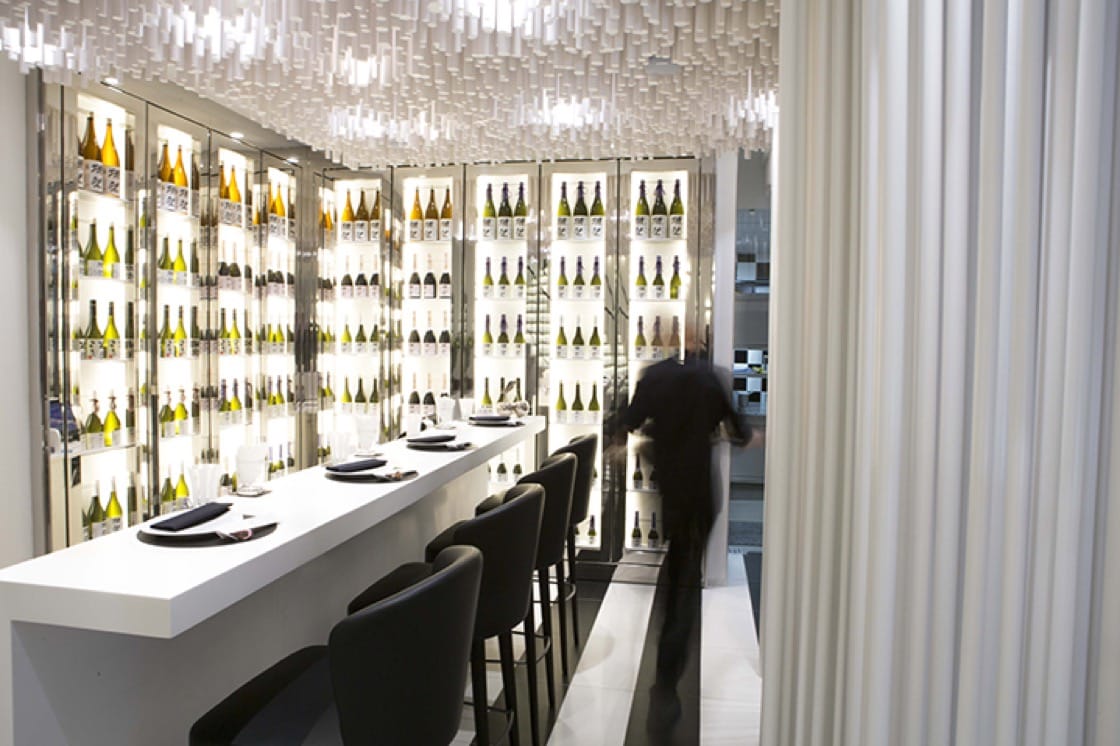 Eastern and Western influences can be found in both the food and drink menus.

East-meets-west on the menu as well. Diners in the restaurant can choose from classic Japanese entrées, such as nigiri, sashimi and California rolls, or from French suggestions with an Asian accent, such as the caramelized black cod marinated in a miso and sake sauce, lobster spaghetti with kasu sake, and entrecôte with wasabi and spinach. A €49-per-person sample lunch menu includes a delicate tempura of tiny soft shell crabs on a bed of fork-mashed avocado with arugula, followed by milk-fed baby lamb with spring vegetables and jewel-like cubes of pink Japanese beets, and for dessert, a sphere of blown sugar filled with Dassai-flavored ice cream and red fruits.

Downstairs in the salon de thé, the menu varies from bento boxes to club sandwiches and veggie burgers at lunch, and for afternoon tea time, pastries by Tadashi Nakamura, the chef who assured the success of Robuchon’s tea shops in Tokyo and Hong Kong until the grand chef convinced him to come to Paris for this venture. His specialty: classic French pastries with a touch of Asian refinement, such as his lemon and yuzu tart with a geléé of Dassai sake. The ground floor boutique sells Nakamura’s pastries, freshly baked breads, sandwiches and a selection of warm and cold dishes in glass verrines for take out. 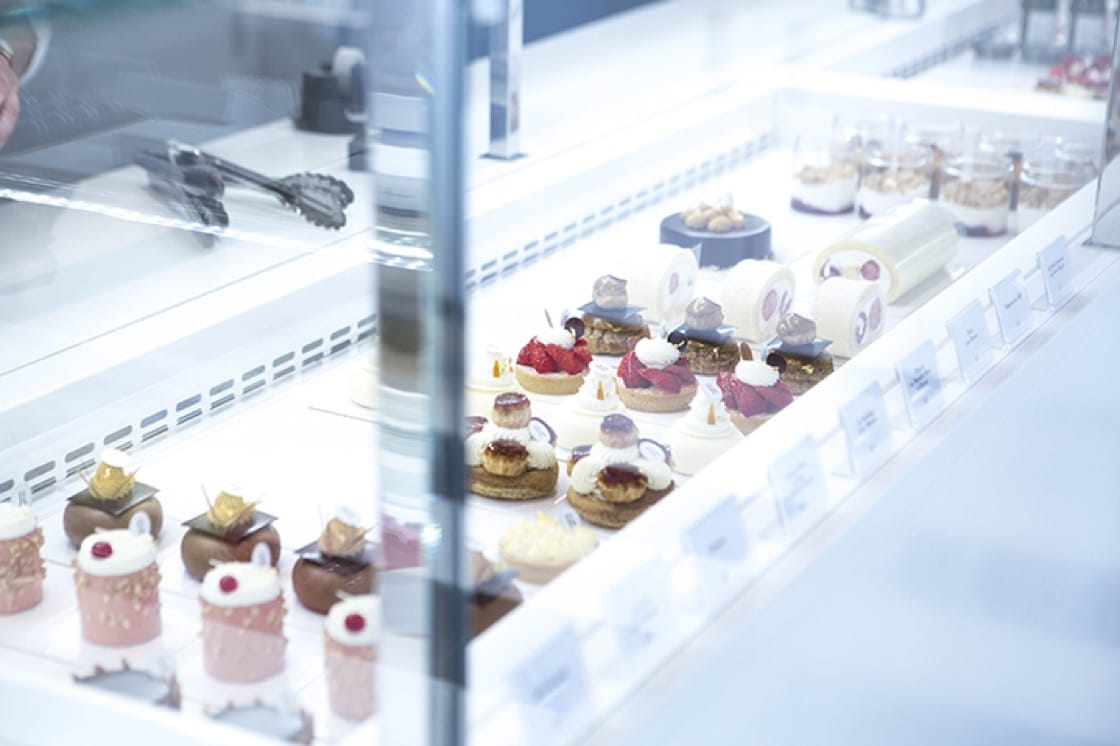 Pastries by Tadashi Nakamura can be found in the 'salon de thé' and the ground floor boutique.

“It is not a question of revolutionizing gastronomy, but of illustrating the common threads between the two cuisines,” says Robuchon. “Our ambition is, above all, to succeed with harmonious accords with Dassai sake.”

Joël Robuchon announced his retirement at the age of 50—over two decades ago—and hasn’t stopped traveling and innovating since. Dassaï Joël Robuchon is the chef’s second homage to Japanese cuisine, after his Yoshi restaurant in Monaco. His upcoming projects include the opening of two new L’Atelier de Joël Robuchon restaurants in Miami and Geneva later this year, as well as a multi-concept project in Midtown Manhattan early 2019.