We've been teasing the MICHELIN Guide California 2021 release for a few weeks, giving you a sneak peak at new additions in LA, the Bay Area, the Central Coast, and San Diego and Orange County. And for the very first time, we're honored to recognize two Outstanding Pastry Chefs, presented in partnership with Blue Bottle: Daniela Herrera of Two Star Commis in Oakland and Erika Chan of One Star Rustic Canyon in Santa Monica. 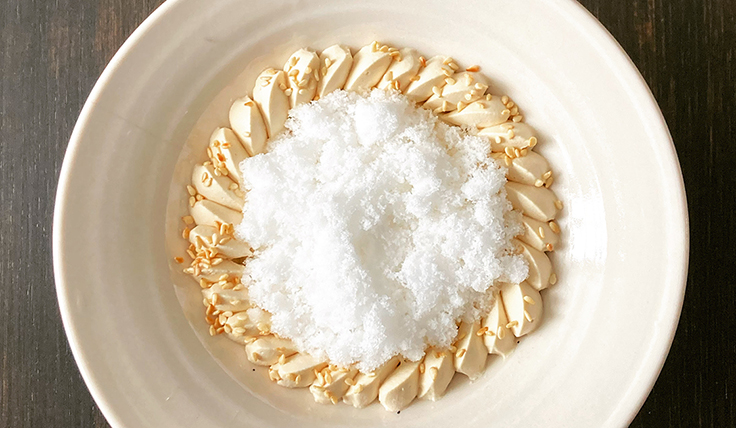 Congratulations to Daniela Herrera of Two Star Commis in Oakland, one of this year's Outstanding Pastry Chefs! Chef Herrera has been with Commis since 2019 and her desserts are inspired and perfectly positioned for the menu’s subtle Asian tones; her dessert of whipped chocolate mousse, tofu and white sesame is a showstopper. Here's Herrera on cooking as an art, the scent of Mexican bakeries, and California produce.

What sparked your interest in pastry?
My interest in pastry didn’t originally really stem from my love of food but rather the artistic outlet it provided. As a child I always dabbled in different mediums of art and cooking seemed like another medium to me.

Did you bake when you were growing up?
I don’t have a romantic story about food growing up; my grandmothers didn’t show us how to make pies, and both my parents worked, so little time was spent in the kitchen. I did own an Easy-Bake Oven, but waiting 45 minutes for a lightbulb to bake a brownie was unreasonable for an 8-year-old. Growing up in Mexico, my parents would, on many Sundays, take my brothers and me to our local bakery; a Mexican bakery, especially as a child, is nothing short of exciting. They tend to be colorful and a lot of them have a knock-off Disney character hand painted on the walls, and the smell—God, the smell—is heavenly. 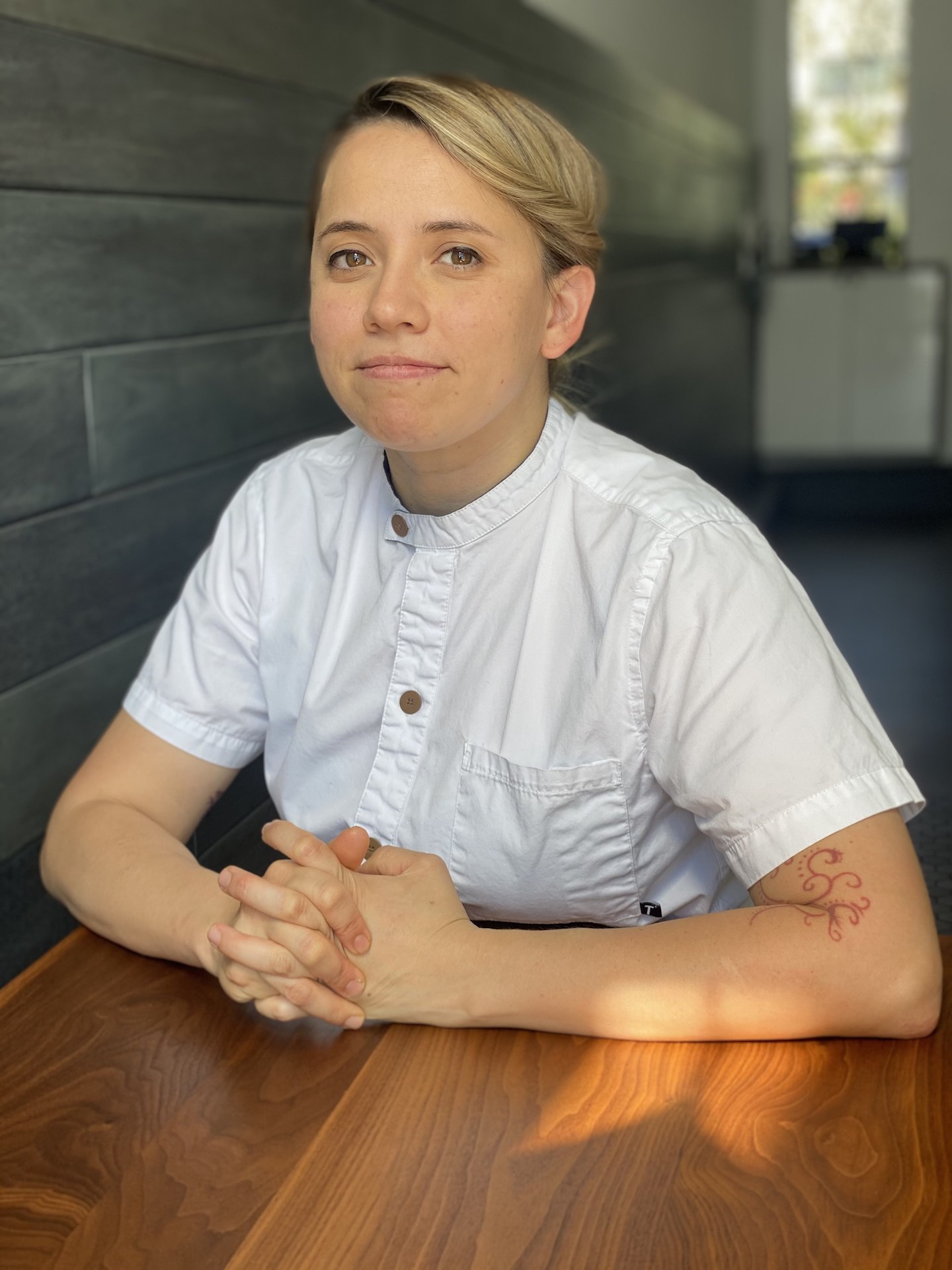 What was your favorite dessert when you were growing up vs now?
For many Mexicans, including myself, our favorite pastries are conchas, a traditional sweet bread with a sucree on top shaped like a conch, hence its name, and cajeta-filled churros. They continue to be my favorite sweet thing to eat.

How do you decide what to put on the menu?
When it comes to creating a dessert, it has to correspond to the rest of the menu. The flavors [of dessert] have to be in-sync and harmonize with all the flavors that had been previously experienced, and sometimes it’s hard to find that balance. I try to have flavors that are familiar and comforting, but also add an element that people aren’t used to, to get them—and me—out of their comfort zone.

How do you utilize seasonal ingredients?
We are terribly spoiled in California when it comes to seasonal ingredients. I’ve learned about so many new ingredients here that I wasn’t able to experience living in Texas, so I’m still learning how to approach each one. While it would be easy to just put a fresh piece of fruit or vegetable on a plate, I’m pushing myself to learn new techniques to bring out the best in the produce. Preserving ingredients is one practice I’m trying to learn more about. 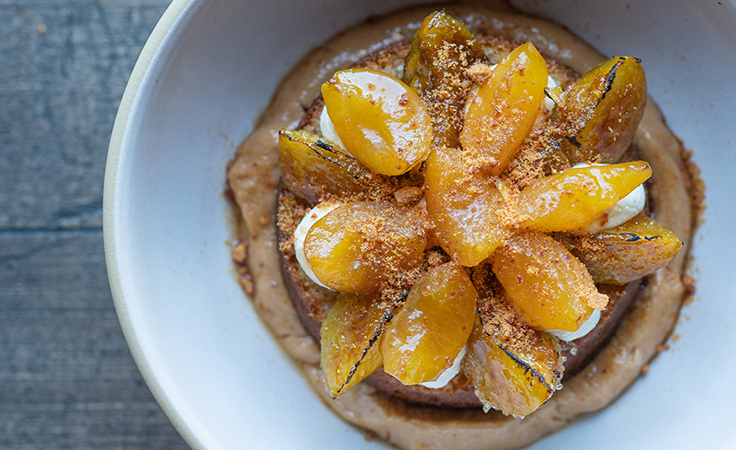 Congratulations to Erika Chan of One Star Rustic Canyon in LA, one of this year's Outstanding Pastry Chefs! Chef Chan's style is in keeping with the seasonal ethos at Rustic Canyon and her desserts—think toasted hazelnut yogurt cake, hazelnut aminos, caramelized white chocolate mousse, grapes, citrus fern, and hazelnut butterfinger—manage to wow with simplicity. Here's Chan on her love of ice cream and the bounty that is California produce.

What sparked your interest in pastry? My family always centered around food growing up, but I was not necessarily into baking. It was something I picked up because we always needed something sweet! I baked a lot for friends and sports teams and special occasions. I also liked the process and being able to work on several components that come together in one dessert.

What was your favorite dessert when you were growing up vs now? I always loved ice cream! I grew up in the Boston area, and New England has a very strong ice cream game. Nothing fancy—a lot of cool, farm stand kind of places where the kiddie size is pretty much a full pint. I still love ice cream, but I think pie (fruit, please) is my favorite dessert to eat. 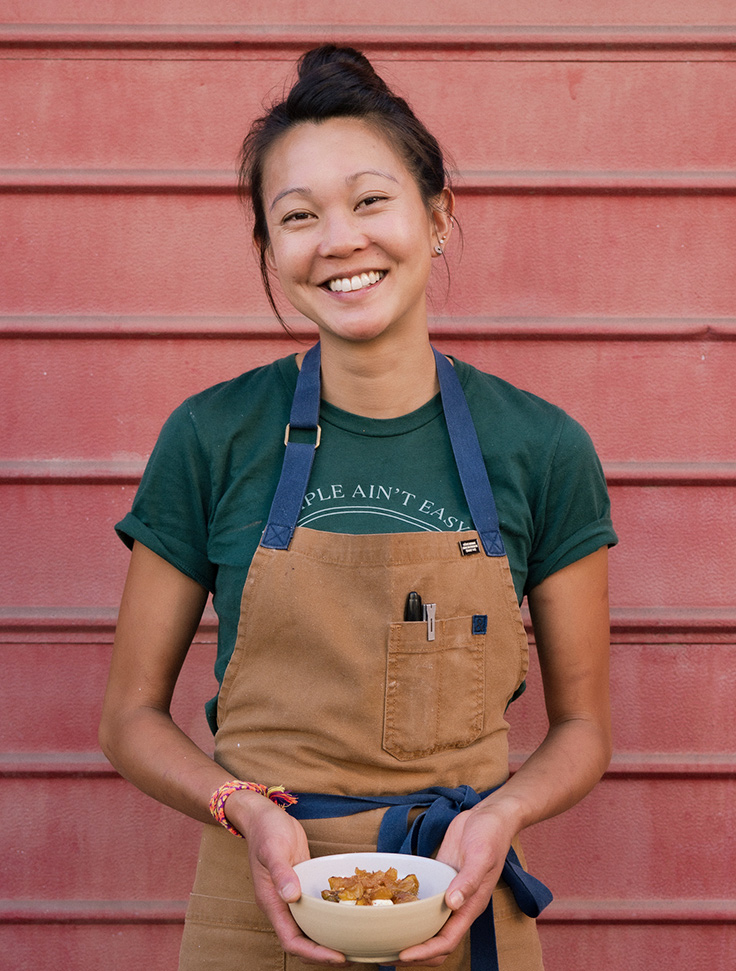 How do you decide what to put on the menu? I really love to let what's in season influence my brain and menu and try to build dishes that let the produce shine. I love going to the nearby Santa Monica farmers’ market and seeing what's new and exciting. All of the California fruits are new to me and have been such fun to work with. I also try to incorporate new techniques and pastries I've never tried before. It's fun to read about traditional desserts from cultures that are unfamiliar with me, then try to work them into the menu. 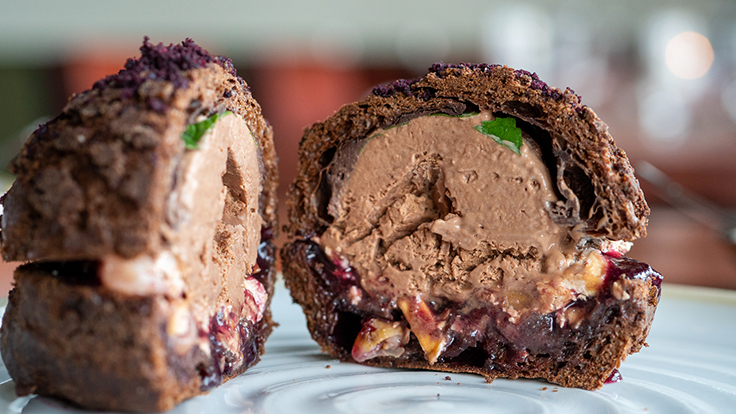 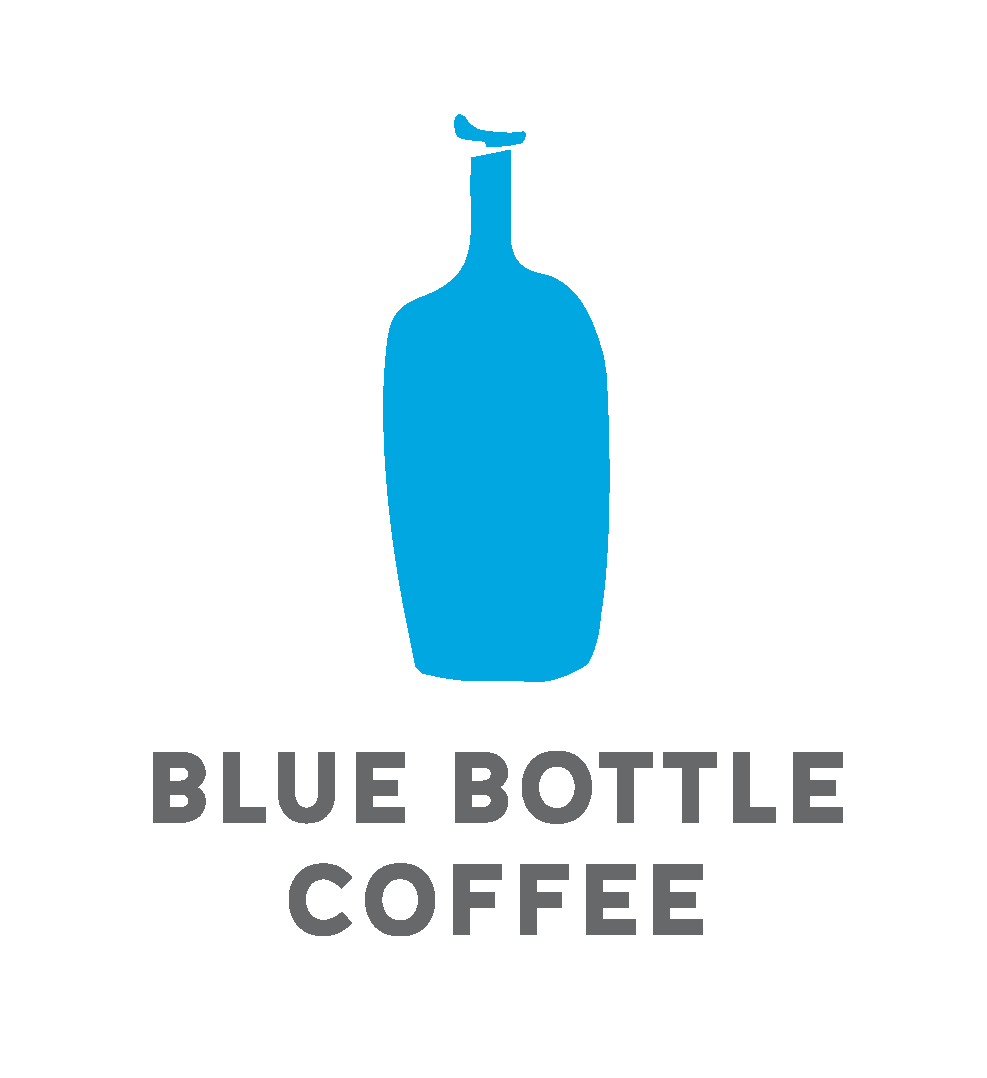 Presented in partnership with Blue Bottle