“It’s like the first row in a show,” says Jhonatan Cano, general manager of two-MICHELIN-starred minibar in Washington, D.C. “Here, guests are situated at six seats per dining counter, all set around chef José Andrés's stainless steel workspace that literally makes his world a stage,” state MICHELIN inspectors. “The lab-like décor isn't a coincidence, since the modern cooking on display here is highly experimental (though deftly avoids mad scientist status). . . . Despite the sense of humor, this kitchen's serious effort should never be taken lightly.”

Andrés has created quite the family in his ThinkFoodGroup; at minibar, there’s definitely a mother hen who keeps everyone in check—service director Dawn Mason. “She’s definitely the person who's there for everyone, full of energy, but with character,” says Cano.

Mason has over 20 years under her belt hustling in the D.C. restaurant biz; she started at minibar two years ago as a back server and quickly rose the ranks to becoming service director of the restaurant.

View Our Employee of the Month Video Series Here 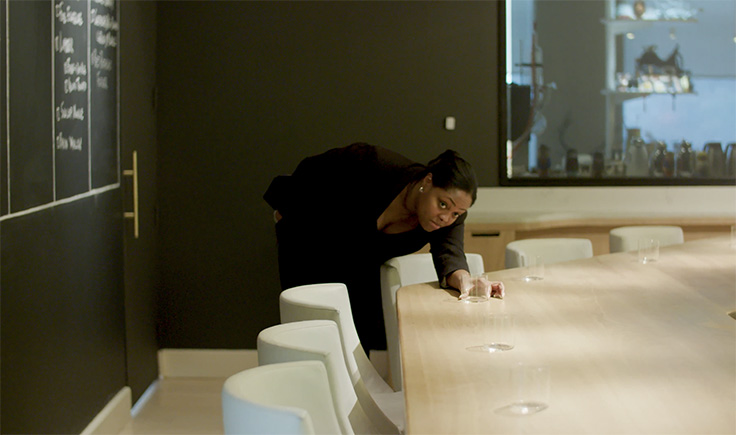 “She does everything from [managing the] wine program to leading service, to helping with allergies on the culinary side,” says sous chef Sarah Ravitz. “I work with Dawn every single day, five days a week, 14 hours a day. There is no one in this restaurant that works harder than Dawn.” Ravitz and Mason first met while working at (now-defunct) Conosci, the secret restaurant hidden inside of Michael Schlow’s Alta Strada. “We just have a very good working relationship—we thrive off of each other, and I think we make each other better. I would be nowhere without Dawn.”

How would Mason describe herself? In three words: fun, ambitious, and strict. (And that’s just the tip of the iceberg—her colleagues have a non-stop Rolodex of compliments to shower her with.)

“From the moment that I had my first restaurant job at the age of 17, I really just fell in love with the way that restaurants run,” says Mason of her career. And of minibar, in particular, “Being a part of this experience has been something that has challenged me in more ways than I have been challenged in a really long time, but it’s also been a really rewarding opportunity that I’ve had as well. Creativity is allowed to show itself here.”

Get to know Dawn Mason in the latest video of our Employee of the Month series below.