For the first time in its four-year history, the MICHELIN Guide Singapore recognized two restaurants with the highly-coveted three MICHELIN star distinction.

The freshly-minted three-MICHELIN-starred restaurants are French restaurant Les Amis, which is one of Singapore’s earliest independently-run French fine-dining restaurants that opened in 1994. Helming the restaurant, which celebrates its 25th anniversary this year, is executive chef Sébastien Lepinoy, who is known for upholding classic French cooking traditions with a strong respect for ingredients, most of them sourced directly from France.

The other three-MICHELIN-starred restaurant is Odette, a contemporary French restaurant, that was opened by chef/owner Julien Royer in 2015. The restaurant, which is named after Royer’s maternal grandmother, is famed for its French cuisine imbued with Asian influences.

Les Amis and Odette join a select group of some 130 restaurants around the world that have been lauded with the three MICHELIN star distinction, which symbolizes “exceptional cuisine, worth a special journey.” According to the Guide, “the distinction is given for superlative cooking of chefs at the peak of their profession, the ingredients are exemplary, the cooking is elevated to an art form and their dishes are often destined to be classics.” 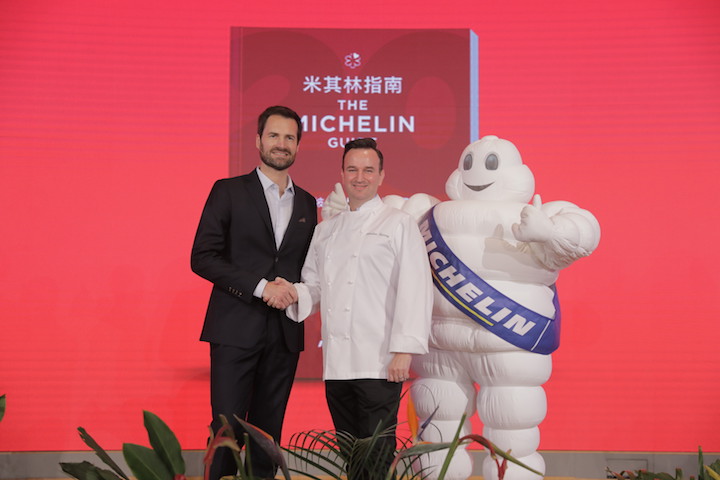 In a separate interview with MICHELIN Guide Digital, Lepinoy says that receiving the three MICHELIN star distinction for Les Amis is a culmination of hard work and bold aspirations. “This is an emotional moment of my life, I started with one MICHELIN star in Hong Kong [at the now-defunct restaurant Cepage], and two MICHELIN stars at Les Amis in 2016," he says. "I come to work everyday thinking about what I can improve, and today the hard work has paid off.”

Having received the pinnacle of culinary recognition, what lies next for Lepinoy? “I will try to get the 4th star,” he says in jest. “I will still continue to work and improve and do much better. I think I am only at 75 percent of my capacity now.”

“We are very pleased and happy for this recognition, especially coming [up] on our 25th anniversary," says Desmond Lim, chairman of the Les Amis Group. "This recognition is all the sweeter, given we are a homegrown restaurant group. It goes to show that Singapore restaurateurs can stand up to amongst the best in the world.”

“One of the main reasons for starting Les Amis was to try to replicate the idea of independent fine-dining restaurants, which was the norm in Europe, but not in Asia then, following many of my gourmet trips to the various French gastronomic regions in Europe," he adds. "While MICHELIN stars were not quite in my mind, we wanted to see if we could match the best.” 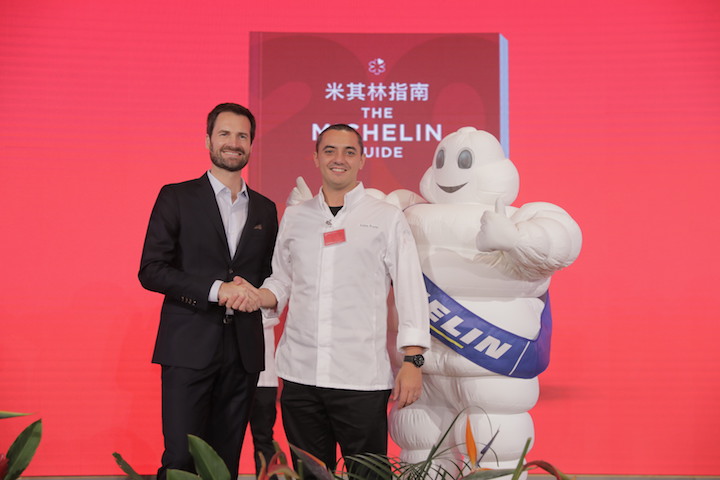 Speaking to MICHELIN Guide Digital, Royer was still overwhelmed as he was processing the news. “It is a dream come true, an incredible honor and amazing recognition for the team and I, who did not dream much about getting a MICHELIN star when we opened Odette four years ago,” he says.

Royer shares a special connection with the MICHELIN Guide. “Having three MICHELIN stars is a unique moment for me as I am from the Auvergne region in Central France, which has a town called Clermont-Ferrand, where MICHELIN was founded," he says. "I studied in a small culinary school next to Clermont-Ferrand and have many friends who did work that [was] related to the MICHELIN tires. It reminds me of a lot of childhood memories.”

“The three MICHELIN star recognition is like the grand cru of the culinary world,” he says. “It is like winning the gold medal in the Olympic Games.”

With an illustrious culinary career in Asia that has spanned 11 years, Royer hopes to weave in more Asian touches into his cuisine. “The DNA of my cooking is French, but it has slowly been infused with Asian influences, in terms of produce, techniques and aesthetics," he says. "I feel much more confident now than a few years ago in the cooking that we do.”

“We’re so grateful to receive this highest honor for a restaurant," says Wee Teng Wen, co-founder of local restaurant company The Lo & Behold Group, which runs Odette. "It’s been an incredible journey for the entire team and I’m very thankful for all their dedication and commitment over the past four years. As a group we will remain focused on building our platform for supporting amazing talent and help them bring unforgettable experiences to our guests.”
Watch the first reactions of chefs from the new MICHELIN-starred restaurants in the MICHELIN Guide Singapore Selection 2019: