“Everyone who comes to work here—or any of the restaurants I have—I try to explain to them [to] treat this as you’re cooking for your family,” says Justin Bazdarich, chef and owner of Oxomoco restaurant in Brooklyn’s charming Greenpoint neighborhood, as well as two locations of Speedy Romeo in Clinton Hill, Brooklyn, and the Lower East Side. “You have all the virtues of doing your best work, doing it for the ones you love.”

A Kansas City native, Bazdarich moved to New York in 2001 and enrolled at the International Culinary Center (formerly the French Culinary Institute). From there, Bazdarich obtained an internship at Jean-Georges Vongerichten’s flagship restaurant adjacent to Columbus Circle, where he started out with prep tasks such as peeling garlic. “It’s funny, they always said I was never going to make it to the upstairs kitchen,” he recalls. “Through time, I learned that it’s how we do it better tomorrow than we do today.” 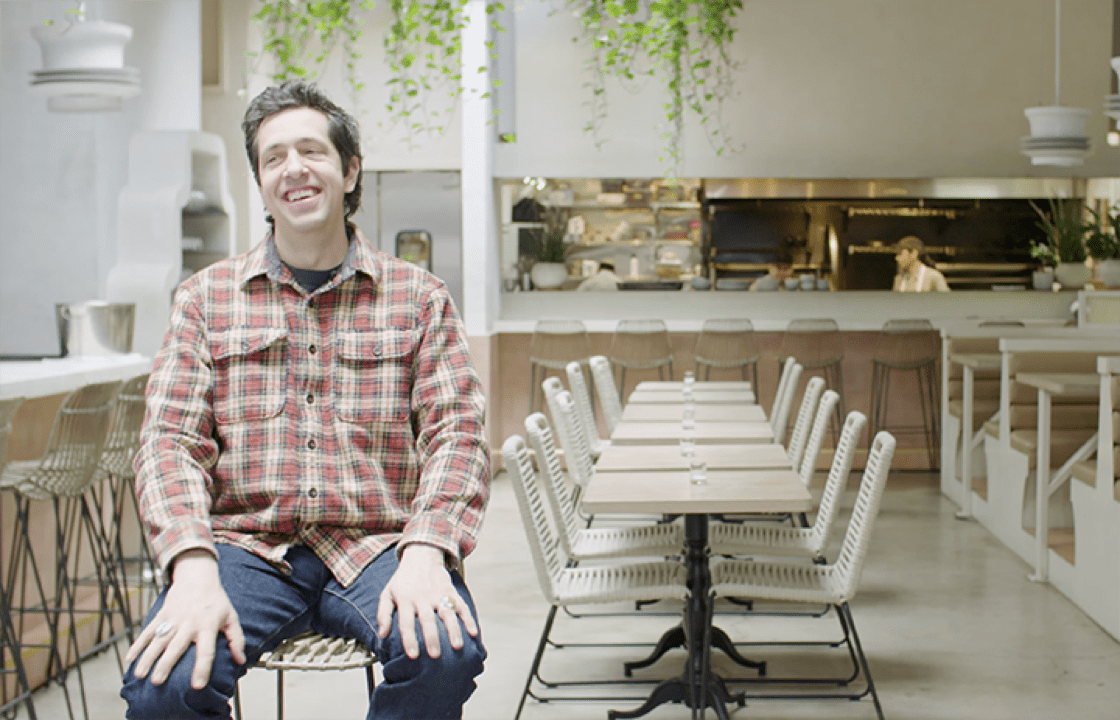 When Perry Street opened in the far West Village, Bazdarich was on the opening team—and it’s where he learned how to create his own recipes. After which, he spent three years traveling around the globe alongside Vongerichten, opening some 15 restaurant in countries spanning from Las Vegas to Istanbul. Then, he found himself in a position of wanting to cook food that was more simple.

His first concept, Speedy Romeo—an all wood-fired pizza concept—opened in 2011. (A second one opened in the Lower East Side six after.) “After opening the second Speedy Romeo . . . I thought to myself I’d like to try a new style of food.”

Enter Oxomoco, which opened on June 5, 2018. “The day after my son was born,” he adds. “The attractive interior feels like a resort, with a long bar, giant skylight to maximize the natural light of such a narrow space and outdoor patio,” state Michelin inspectors of the restaurant’s design that acts as a backdrop for the dishes. “The food lends itself to many smoky and earthy flavors—you’ve got acid, you’ve got lime and all these different fruits, and the chiles and then the marinades, . . . throwing everything over the wood-fired grill, everything is just so beautiful.”

Dinner menu items include a charred carrot tamal with green garlic and hoja santa mole, as well as a 32-ounce dry-aged bone-in rib eye served with salsa roja, chimichurri, charred poblano and chorizo beans. An eclectic mix of tacos is served at both brunch and dinner as well. In terms of the dishes, Bazdarich says that color on the plate is a must. “This restaurant particularly, I thought in that realm a lot,” he says. “The name Oxomoco is named after the Aztec goddess of night—with that sort of dreamy ethereal type, the food sort of takes a psychedelic look.”

Oxomoco received a Michelin star on November 4, just five months after opening. “You can’t forget,” he admits. “We weren’t planning this in any way, but we stuck with the mantra of ‘how do you do it better tomorrow than today?’ The more I started eating the food and watching the service, everything was sort of glowing in here.”

“I think that us getting a Michelin star in Greenpoint is only [adding] to the culinary base that’s already here,” he continues. “To be able to walk out and stand on the street and watch the sunset go down the block . . . There’s so many institutions that are here in this neighborhood. I want us to be an institution as well.”