Meet Cédric Grolet: A Pastry Star on the Rise

In an exclusive interview in Asia, one of the most talked-about pâtissiers, Cédric Grolet, discusses what lies behind his visually-stunning confections.

Restaurant Le Meurice’s pâtissier Cédric Grolet is undoubtedly one of the hottest names in the pastry world in France. In an exclusive interview with MICHELIN Guide Digital, he shares his culinary beliefs and how Instagram has helped him to reach fans around the world.

To connoisseurs of French pastry: if you haven’t heard of Cédric Grolet, it’s time to add him to your radar. Over the years, his social media presence has garnered him over 800,000 followers on Instagram (@cedricgrolet) with his spectacular works.

Beyond the tens of thousands of likes he gets for every post, Grolet is just as critically acclaimed in the industry. He was chosen as the Pâtissier of the Year 2015 by Le Chef Magazine, the Best Pastry Chef 2016 by Relais Desserts Excellence Awards, and the winner of Les Grandes Tables du Monde’s Best Restaurant Pastry Chef last year (renowned French pastry legend Pierre Hermé was one of the judges).

With a slew of pastry chef honors bestowed upon him, Grolet’s career has seen a meteoric rise. 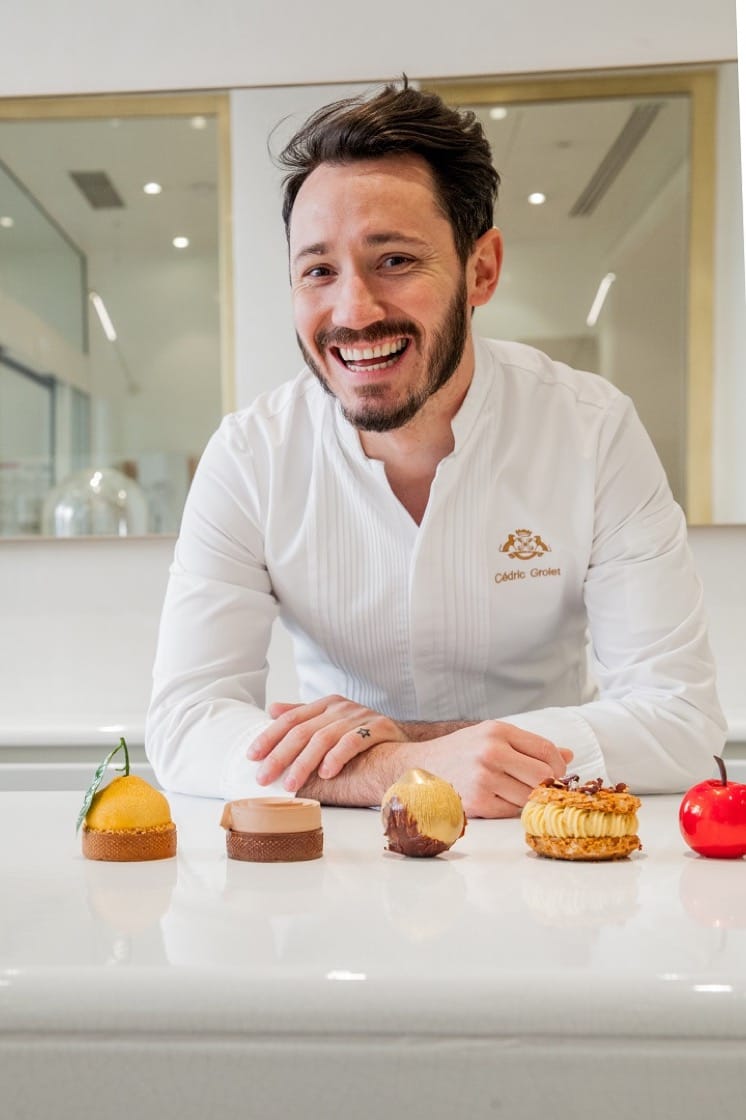 Entering the World of Pastry

Grolet hails from the Loire Valley, the largest World Heritage Site region in France that is accredited by UNESCO. Growing up in the magnificent surroundings of Châteaux in the valley—dotted with quaint riverside villages and vast vineyards—the concept of beautiful and good food are not foreign to him. He recalls that there wasn’t a day he spent at home without good wine, cheese and honey that were laid on a colourful tablecloth, coupled with lively chatter among townsmen.

Growing up, his grandparent’s restaurant was his playground. At 13 years old, he had the first taste of kitchen action as an apprentice, and quickly set his sights on carving out a future career in the pastry field a year later.

“I never liked studying and had really bad results at school. I wanted to cry whenever I got called by a teacher to answer questions!” Grolet recalled. The difficult time he endured in the classrooms became a catalyst to enter the culinary world at a young age. “French patisserie has a gorgeous appearance. That’s what captured my attention at the beginning. As for now, how pastry looks is still important to me, but I’m more obsessed with the endless combinations of textures and flavors,” he noted. 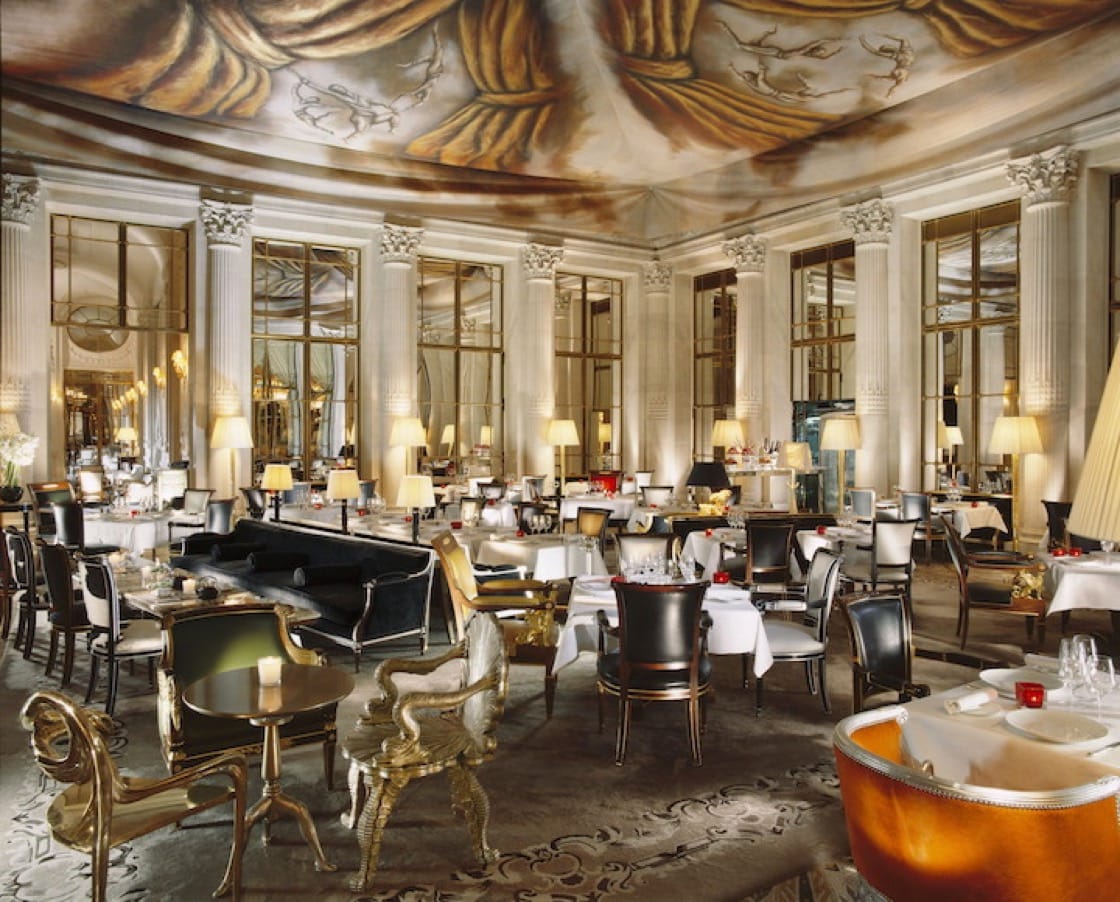 Grolet moved to Paris at the age of 21 to pursue his dreams of becoming a pâtissier. He started out making macaróns at the century-old gourmet food establishment Fauchon. During the year-and-a-half stint he had to prepare tens of kilograms of batter daily. Memories of the chore triggers him to exclaim: “I was almost driven crazy!”

After dipping his toes into pastry-making, Grolet widened his knowledge in the departments of boulangerie and product development, where he specialized in desserts under the tutelage by chef Christophe Adam of L’Éclair de Génie.

When asked to describe his serious attitude and mental strength, some of Grolet’s ex-colleagues stated, “He was so deep into what he did that he would forget the working hours. He trained in every position possible. Even with the ones that he didn’t like he took them with determination as learning experiences. Therefore, he was able to improve himself constantly.” 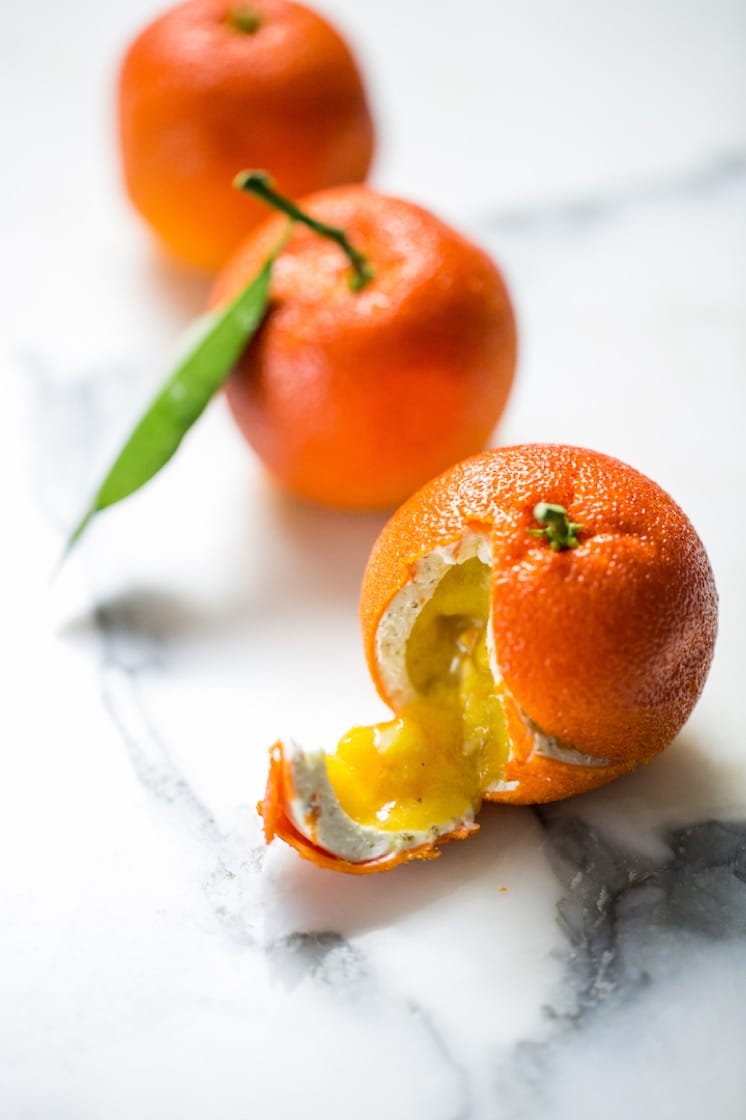 Grolet’s signature pastries imitate the look of fresh fruit. In this image the molten-like filling is made of cream, chocolate ganache and preserved fruits with concentrated citrus flavors. (Photo by Pierre Monetta)

Having established a reputation of technique and tenacity, Grolet was soon entrusted to a more prominent role at Fauchon, handling product development and training at the same time. Later, he was deployed to overseas outlets in Beijing, Dubai and Morocco to set up new teams.

The globetrotting experience is one of the factors that honed his international vision. Leaving Fauchon after six years, Grolet snagged the position of pastry sous chef at the historic palace hotel, Le Meurice, in Paris, which has two Michelin stars. This proved to be a career-defining moment for him, as he got promoted to be the pastry chef following the departure of his predecessor, and in 2013, French culinary luminary Alain Ducasse took over the hotel’s fine-dining restaurant and gave Grolet the opportunity to create the desserts on his menu.

“He is someone with a very high standard. He told me that while I had very good technique, it was not enough, because there were so many great chefs out there with fantastic techniques. He wanted me to showcase more personal style and character in the desserts,” he says.

The partnership with the godfather of French cooking was a huge challenge, but was also a vital source of inspiration which shaped Grolet. “Alain Ducasse is in fact not a big fan of sugar. He gave me a suggestion to cut back the sweetness, and instead highlight the natural taste of the ingredients as much as possible,” he says. Ducasse also gave him another piece of homework—to create desserts that stimulate the senses. 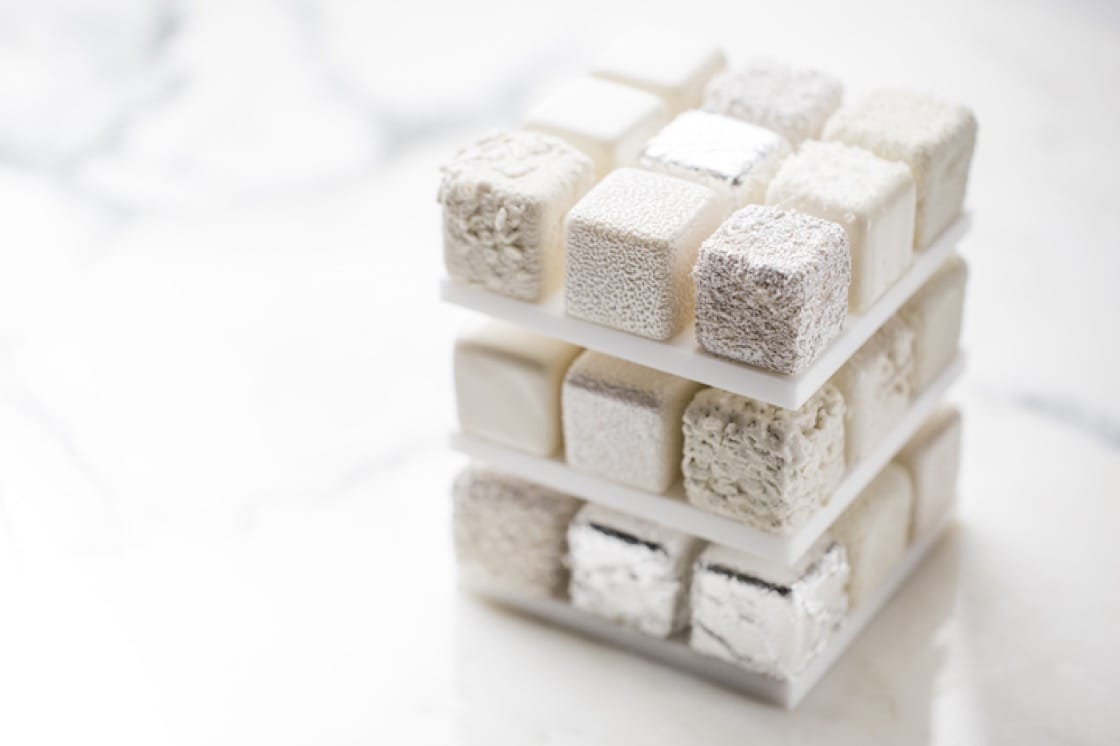 Chef Grolet’s Rubik’s Cube Cakes that were created six years ago got food critics to pay attention to him. Every year, he injects new elements to the evolved cakes. (Photo by Pierre Monetta)

Fruits of His Experience

Grolet’s desserts these days have a fruity appearance, a molten-like ganache filling and the taste of fresh fruit is enriched by a hint of vanilla. Upon the first bite, the vivid fruity notes explode, yet the filling is light enough that it quickly disappears in the mouth.

The memorably delicious dessert certainly bears the pâtissier’s trademark style. As it is not overly sweet, it doesn’t leave one overwhelmed even after finishing an entire piece. All these qualities in Grolet’s new confections have exceeded Ducasse’s expectations. The pastry maverick doesn’t rest on his laurels, and his slate of culinary achievements is the fruit (no pun intended) of days of experimentation and trial and error.

Classics in a New Light

In an interview, the pastry chef once said, “If I got hold of a traditional recipe, I would put my touch to improve it.” So what does tradition mean to him?

“It’s a necessity—to Paris, and to France. It’s an indispensable part of our culture,” Grolet says. His saying to improve the tradition is not a trope of self-promotion.

“Preserving the DNA of French pastries is very important, because it’s the root of everything. I just want to make them lighter and more exquisite. Because the time has changed, and so has our sense of aesthetics. We don’t rely on lots of sugar to make something delicious anymore. Flavour comes from technique, choice of ingredients and proportion. That's what evolution means.” 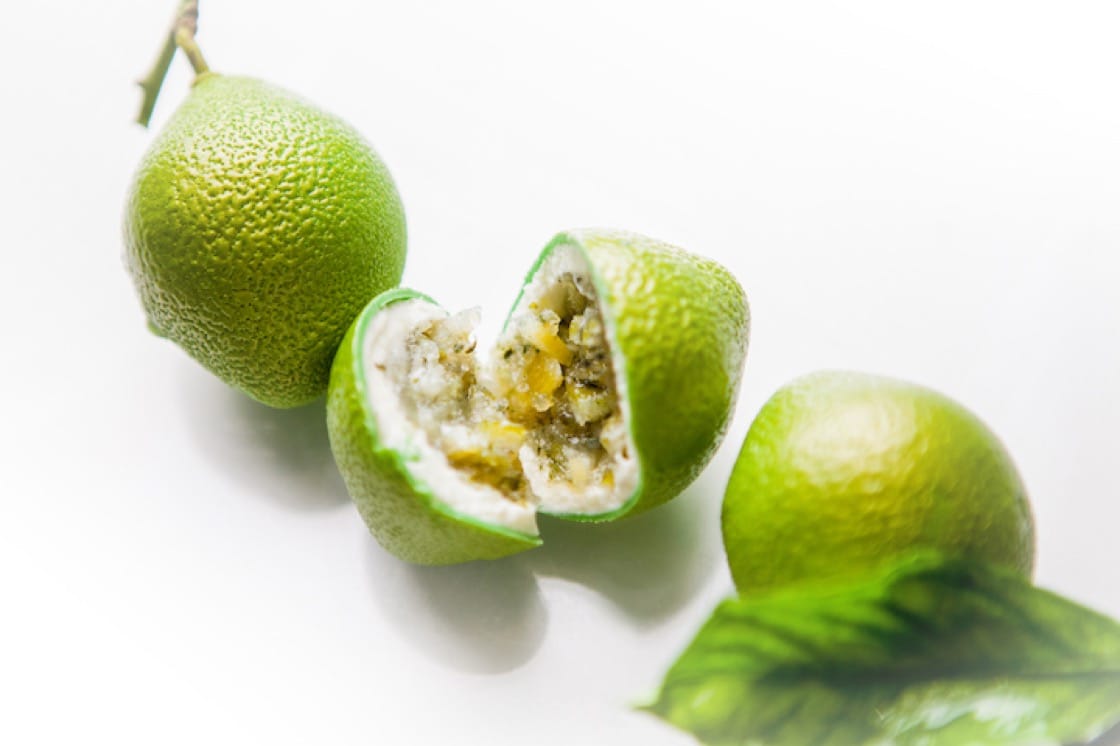 Le Citron Vert is one of chef Grolet’s most prized works. (Photo by Pierre Monetta)
Grolet told us his pastry philosophy is to not repeat what others have done, but to create confections with personal thoughts. For example, his desserts emphasize a single ingredient. They never combine different tastes, but maximize a pure flavor and make diners aware of what they’re eating with the original character of the “hero ingredient” kept intact.

As a 32-year-old hotel pastry chef, it might not be so far fetched to see Grolet as the legend of our time, considering his works have quickly become the subject of imitation. And the legion of fans that he has on Instagram can easily make many world-class chefs envious. He admitted managing Instagram is really a significant matter.

“Because it breaks the geographical barrier and restrictions, allowing people from all over the world to see my desserts and interact with me. It also brings me new clients. I pay a lot of attention to the presentation of my work to ensure that these pictures on Instagram arouse people’s interest,” he says. 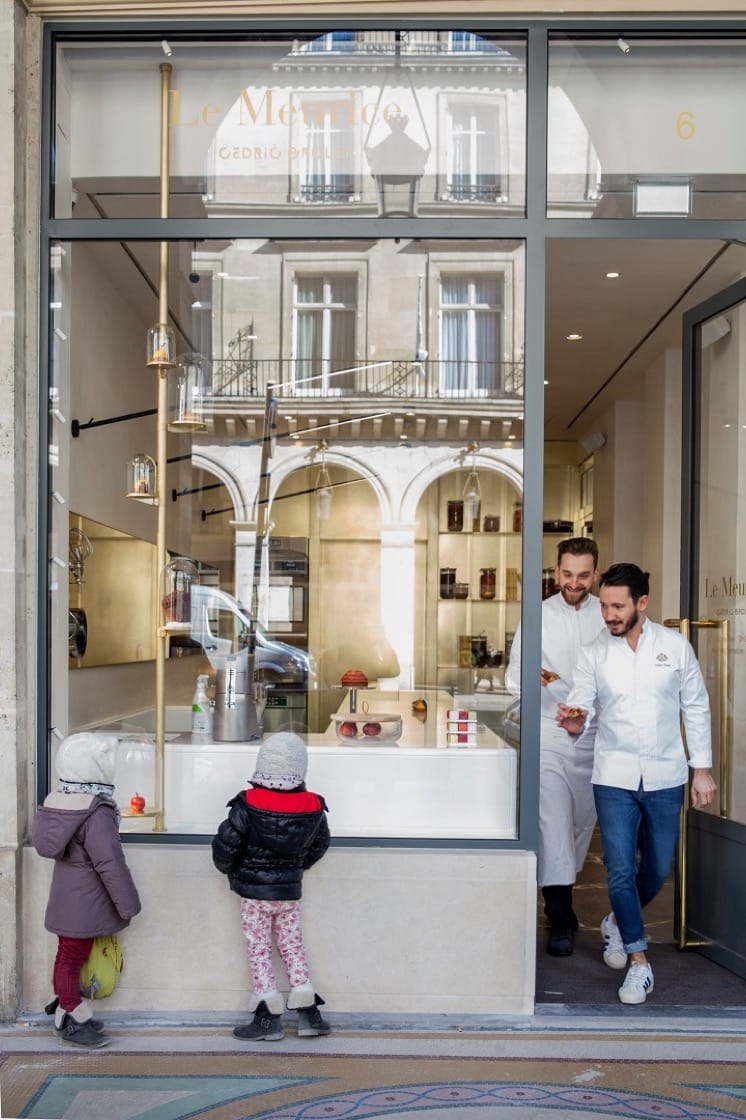 Chef Grolet’s patisserie opened recently at the 1st arrondissement in Paris.
However, the superb appearance of his confections does not mean that flavours are compromised. “It frustrates me sometimes when I create something beautiful but not delicious enough. I wouldn’t put it online because it doesn’t meet my standard.” When asked who takes all the eye-catching shots we see on Instagram, Grolet says in mock exasperation, “It’s me!”

How does he envision himself in the history of French pastries? Grolet pointed out he only wants to make the best desserts. The rest doesn’t concern him so much. His dream is to one day spread his patisserie around the world. March 20 marked the opening of his first patisserie that is backed by Le Meurice in the 1st arrondissement in Paris. That is only the first step to his grand destination—and we can hardly wait for more.

This article was written by Agnes Chee and translated by Vincent Leung. Click here to read the original version of this story.